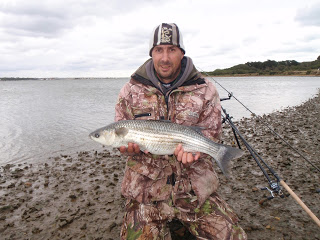 My latest guest blog is one I’ve been looking forward to for a while now, regular visitors to the blog will have read about my efforts at trying to catch mullet over the years without a great deal of success so I was well chuffed when National Mullet Club Catch Recorder, Pete Bluett, agreed to pen an article about mullet fishing for me. Loads of great info and some stunning fish photos.

Introduction
There are many myths around grey mullet, such as they’ve got soft mouths (not true) or that they’re impossible to catch (also not true). The one word used to describe them that definitely is true though is ‘enigmatic’. Indeed, I’ve often said to myself as a fish swims past my bait totally ignoring it for the 20th time ‘my word, these mullet sure are being enigmatic.’ But like all other species, provided you use the correct tactics and tackle and put the time in, results will follow. And it’s worth it, pound for pound there are fewer, if any, harder fighting fish in our waters. They are not known as the ‘British bonefish’ for nothing.
There are three species of grey mullet in UK waters. The golden grey mullet (Liza aurata) is the smallest and rarely grows over 3lb in weight. Unlike the other two they are a coastal species found only in high salinity conditions either on the open coast or the very lower ends of estuaries or in harbours. In most parts of the UK they only occur during the high summer months and are not found as far north as the other two species, being confined to the southwest, south coast and southern Ireland. The second is the thin lipped grey mullet (Liza ramada). The upper size limit for thin lips is debateable but anything over 5lb would be considered an exceptional specimen. Like golden greys, thins are predominantly shoal fish, but unlike goldens they can and do tolerate a wide range of salinities. They are often found above the tidal limit in pure freshwater. Thick lipped grey mullet (Chelon labrosus) are the largest of the three. The British record is 14lb but specimens of this size are exceptionally rare. The National Mullet Club describes fish of over 8lb as ‘leviathans’ and probably the realistic upper limit for most anglers. Thick lips are found in a huge range of locations and environments – in some areas they will happily tolerate pure freshwater, can be caught on a large range of methods and baits, and are therefore the species most often targeted by anglers. It is thick lips I am obsessed with and spend 99.9% of my angling time chasing.

My own mullet fishing life started as a kid in the late 1970s growing up next to the River Camel in north Cornwall. Back then the idea that mullet were uncatchable by conventional means was still widely believed, and the local method of choice was to deliberately foul hook them with very heavy gear and strings of large trebles (known now as ‘snagging’ or ‘ripping’). The river was full of mullet that were nearly always visible and many fell victim to this rather barbaric practice. However the local tackle shop owner and rod builder, the late great Keith Appleton, grew fed up with witnessing this and decided to offer annual prizes for mullet caught properly. Armed with this incentive, myself and one or two others set out to learn how to catch them with bait. Our tackle was crude and we were really making it up as we went along, but eventually I started to have some success ended up taking home that trophy four years running! Thus began the obsession that still grips now, over 35 years later.

Since I started mullet fishing all those years ago, perhaps the biggest advancement has been the adoption of coarse fishing methods and tackle. Because the mullet is a ‘sea’ fish I think for a long time there was a tendency to try and catch them on completely unsuitable sea fishing gear, contributing to the ‘uncatchable’ reputation. But the mullet’s diet and feeding habits are much more akin to coarse fish so it stands to reason that a coarse fishing type approach is the way to go. Thick lipped mullet, as the name suggests, have a pronounced thick fleshy upper lip and much harder lower jaw. They feed predominantly by grazing algae and diatoms, or sifting through the sediment in search of invertebrates or other very small food items. The lower jaw is cleft and they often leave tell-tale parallel tracks in the substrate giving away their presence.

Fortunately for the angler, ‘thicks’ are opportunistic and as well as their natural food will often investigate anything else they think might be edible. As such the variety of baits that have taken mullet over the years is almost endless, but the one that has stood the test of time and caught vastly more fish than any other is good old sliced bread. Most prefer plain white but I have also had a lot of success with Kingsmill 50/50 or Hovis Best of Both. Thin lips and golden greys are more predatory in their feeding habits and are more often taken on fish or worm baits. Both require a more specialist approach, and as I’m not an expert on either, it is thick lips I’ll talk about from here onwards.
Tackle (disclaimer – I am not affiliated to any of the companies mentioned below, they’re just what I happen to use)

As mentioned above, coarse tackle is a must if you want to have a realistic chance of success. I use ‘avon’ style rods because they are versatile and can be used for all of the three methods I employ – float fishing, touch legering and quiver tipping. Others may use either specialist float and leger rods, it is purely personal preference. My rods are all 12ft in length – a lot of the places I fish preclude using anything longer. Once again though other mullet anglers prefer longer rods, often up to 15 or even 17ft in length. Probably more important than length is the action. I use softish rods that bend right through to the butt – my main three are 0.5lb, 1lb and 1.5lb test curves. Mullet are very powerful fish that run long and hard and in my opinion too stiff a rod is asking for hook pulls or breakages.

For reels I use fixed spools in 2500 size. Whether you prefer front or rear drag, a quality drag mechanism is imperative. Not only are they going to be used in salt water, but a decent mullet will expose a poor drag in no time at all. For years now I have been a fan of Shimano Supers and Stradics and see no reason to change any time soon. Very recently I have started using a centre pin for a lot of my float fishing. It’s far too early for me to comment on that but guys who are much better mullet anglers than me absolutely swear by them and I’m looking forward to experimenting more during the coming summer.

For mainline I use bog standard 6lb bs mono, usually Daiwa Sensor Black. When mullet fishing your line takes a pounding and I see no need to use anything more expensive. In 2016 I dabbled with braid and had some success with it but will probably stick to mono for most of my fishing for the time being. If I need to use a separate trace or hooklink, 4lb bs fluorocarbon fits the bill.

When it comes to hooks, the barbed vs barbless debate rages among mullet anglers. For me personally 90% of the time I use Kamasan B981 in size 8. This is a standard barbless J pattern and has caught me hundreds, if not thousands, of mullet. For me the advantages of barbless far outweigh any perceived disadvantages. The other 10% of the time I use Kamasan B983s in size 10. This is a wider gape pattern with a whisker barb and can be better for legering.

I use two main types of float – Drennan Loafers from 2SSG up to 5SSG and Drennan Pudddle Chuckers (the slimline unloaded ones) again in various sizes. All of my fishing is done sub-surface so I’m not qualified to comment on controller floats etc for surface fishing! The leads I use are simple bombs in 1/4oz, 3/8oz and 1/2oz sizes plus 1.1oz Korda gripper carp leads. For swimfeeders I use in-line method feeders in 14g and 28g sizes. Other than that, high quality small swivels – barrel, snap and three-way, a selection of split shot and a plummet. More generically, a fish-friendly landing net is a must. Mullet have large scales that detach very easily and must be handled with great care. Good quality polarized sunglasses will also protect your eyes and help immensely with fish spotting!

Thick lipped mullet are traditionally thought of as a summer species and indeed for most parts of the UK this holds true. Along the bulk of the south coast the season is nominally May to October or possibly into November if the weather holds. The further north or east you go, the shorter the season. But way out west in Cornwall and also in south west Ireland and the Channel Islands, it is possible to catch mullet throughout the year. I have caught fish in west Cornwall in the depth of winter with sub-zero air temperatures, and all the puddles and the sand on the beach frozen solid. In terms of range, they occur all around the southern part of the UK and up the western side at least as far as the Clyde system in Scotland. How far they range up the east coast of the UK is debateable but probably at least as far as the Scottish border. They are also prevalent all around Ireland during the summer, and indeed southern and south west Ireland offers some of the finest mullet fishing to be found anywhere.

As mentioned above, the variety of environments and locations where thick lips can be found is almost endless. Any inshore area of salt or brackish water will almost certainly have either a population of resident mullet or visiting mullet. And in my local River Camel in Cornwall they will often happily spend the summer miles from the sea in what is effectively fresh water. Estuaries are the classic place to find and fish for mullet. If the water is deep enough, they may well be present at low tide, otherwise they will appear as soon as the tide floods and make their way upriver with the filling tide. Harbours, especially working harbours, are also very attractive to mullet because of the relatively easy pickings on offer. Likewise, some of the very biggest mullet live in marinas, but sadly angling is prohibited in the vast majority of these nowadays. Rocky coastlines can also be productive, although that can have a feeling of searching for the needle in the haystack! Bizarrely, given what they eat, mullet often find sandy surf beaches very attractive and sometimes shoal up in very shallow water in big numbers. More often than not though, they will be found near structure, be that man-made or natural. For example piers, boats, rocks, bridges and especially weed beds.

In part 2, Pete takes us through the methods he uses.