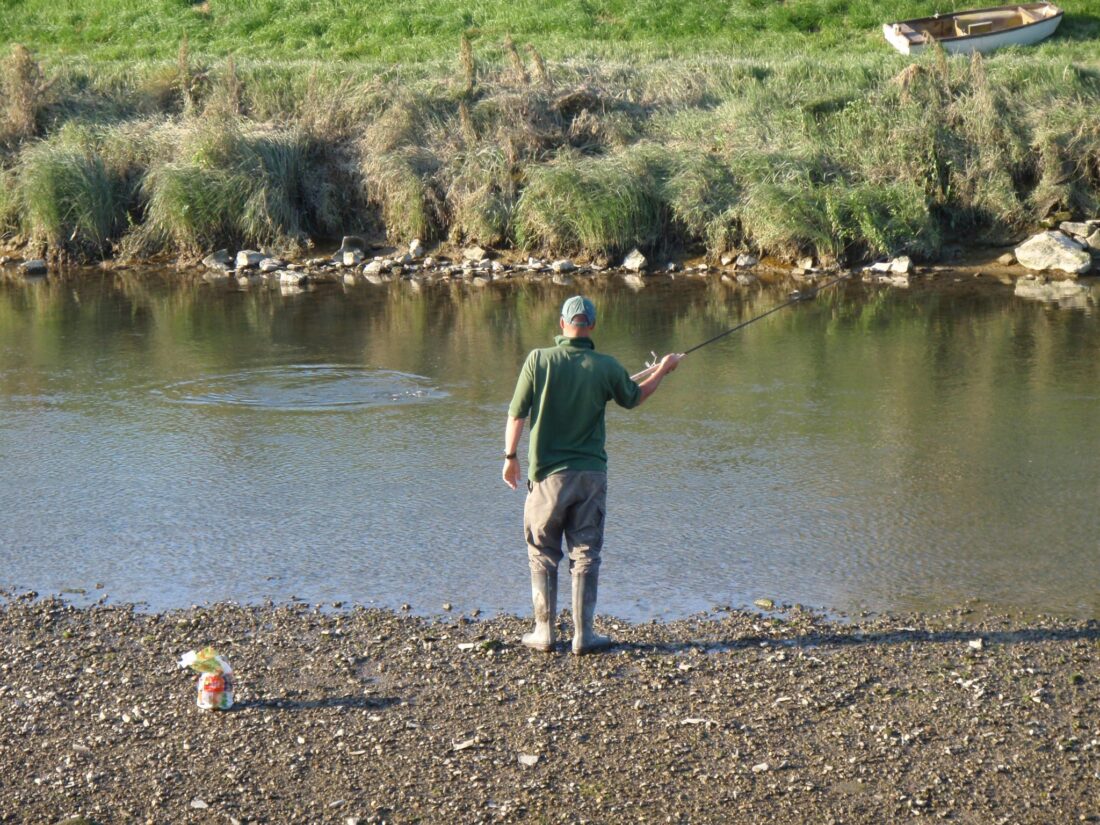 The River Camel rises on the edge of Bodmin Moor and flows south west through the town of Camelford towards Bodmin. Just outside Bodmin the river turns through 90 degrees and heads north west towards the north coast and the sea. 8km downstream of Bodmin the river bisects the town of Wadebridge before flowing another 10km past Padstow and out into the sea via a majestic sandy estuary. The mouth of the estuary is guarded by the notorious Doom Bar, so called because many a ship and sailor have met their doom there. If you come across a pint of Sharp’s ‘Doom Bar’ in your local, that’s what it’s named after. The name ‘Camel’ derives from the old Cornish language words ‘cam’ and ‘heyl’ meaning crooked estuary.

Water quality in the Camel is of a very high standard and the river offers some of the best salmon and sea trout fishing in the south west. Brown trout are also present in large numbers although like elsewhere in Cornwall they rarely exceed a few inches in length. A 1lb brownie in the Camel is a real specimen. Like all of Cornwall, there are no coarse fish. At the seaward end there is very good estuary bass and flatfish fishing amid absolutely stunning scenery. There are also good rock marks and quality inshore reef fishing for a variety of species. The bass fishing in the Camel is not always restricted to the bottom of the estuary though. Every year large bass push well up the river, often into areas where there is little or no salinity. Last year a fish of 7.08 was taken at low tide above Wadebridge on a thin lip lure and in 2007 a fish of 8.08 was taken in a salmon pool on a lobworm. Sizeable flounders turn up from time to time too. 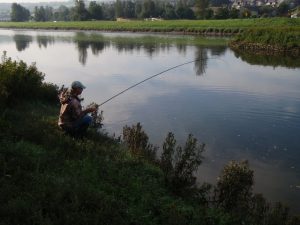 But mullet fishing is what we’re here to talk about and the majority of that happens in and around Wadebridge. As I mentioned before, the river bisects the town and the two halves are joined by the 17 arches of the magnificent town bridge. Previous to the bridge being built it was necessary to wade across the river via a dangerous ford, hence the town’s name. The bridge itself was commissioned by a local vicar, was started in 1460 and completed in 1468. It is regarded as one of the finest structures of its type. Local legend has it that the foundations for the bridge were built on bales of sheeps wool, hence the name of one of the local pubs ‘The Bridge On Wool’. Just above the old bridge there is a footbridge across the water that was built in 1991 by Anneka Rice for the TV programme ‘Challenge Anneka’ – one of the few times Wadebridge has been more famous than it’s illustrious neighbour down the river! 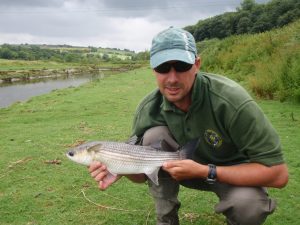 I was lucky enough to be bought up in Wadebridge, just a stone’s throw from the river bank. I was into fishing from an early age, mainly just casting a worm or spinner for the hundreds of small trout that inhabited the tidal reaches. All the time though I was intrigued by the big shoals of mullet than were ever present during the summer months, rolling on the surface, cruising with their fins out or flashing on the bottom. Basically just daring anybody to try and catch them! Back in those days mullet still had that reputation of being more or less uncatchable and in Wadebridge nobody bothered fishing for them. The challenge proved irresistible to my mate Rob and I though and we set about trying to tempt them. We decided to use ragworm for bait as the foreshore was teeming with burrows and a few forkfuls provided enough worms for a days fishing. Early attempts on the mullet proved fruitless. Our rods were inappropriate as was pretty much all of the rest of our kit. Plus we were floatfishing which was something neither of us had tried before. An added hazard was the fact that the town had no real sewage treatment facility back then, just crude sewage outfalls, and you were constantly having to clear all sorts of unmentionable stuff off your line and end tackle. It seems incredible to me now, but that was the reality back in the late 1970s. After a while we settled on the tactic of trotting floats down through the shallower areas where we could clearly see fish were present, and eventually Rob managed to hook and land a small thick lip. I followed suit shortly after and the die was cast. I was a mullet man from that point onwards! I gradually got better and better but still suffered more blanks than successful sessions. I loved it though and fished every opportunity I got, revelling in the chance to be on my own on the river, me against the fish. I’m not sure my mum would agree though as I nearly always came home stinking to high heaven and plastered in mud. I vividly remember the first time I caught five in a day. I didn’t think I would ever manage such a feat again and imagined I must be the best mullet angler ever (in my defence I was only thirteen)! 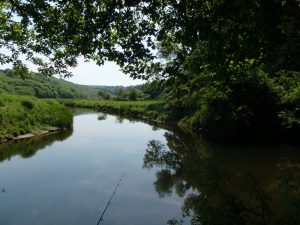 Now, thirty years later, the town has changed out of all recognition and the river is a lot different, not to mention a whole lot cleaner, but the mullet are still there. And more often than not I’m still using the same shallow water trotting method that I used as a 12 year old boy. The only difference is I now use bread instead of worm. I love it (the river) and them (the fish) more now than ever and I’m going to offer a few lines of hints for anybody thinking of coming here to fish. 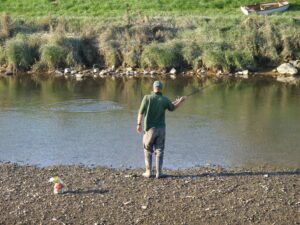 Wadebridge lies just above the point at which the estuary narrows from fairly wide to very narrow. As such the tides do not follow the six hour cycle this far up the river. Irrespective of springs or neaps, the tide does not start to flood until about two hours before the published time of high tide. The river then fills up very quickly! High tide back to low takes about two hours for a neap tide and about four hours for a spring. Therefore at Wadebridge you enjoy an extended period of low water where the mullet hold up in the pools and runs that characterise the river in the town. Low tide is our preferred time to fish, it just seems more exciting somehow as the water is nearly always shallow and clear. Often the mullet are found in the very fast runs and we catch these trotting with loafer type floats fished very shallow – often less than a foot deep. When the fish are in the deeper, slower areas legering can be the way to go. Either fish a running leger with a short trace, or a short paternoster. Either way, I fish light and never use more than half an ounce of lead, you just don’t need any more than that. Most of the time recently I’ve been roving around holding the rod ‘touch’ legering which has worked really well. There are a couple of spots where you can leger visually by casting onto the gravels in front of the fish and watching them pick up your bait (hopefully). Even more rarely you can fish floating crust but there are very few swims where the flow is slow enough and anyway it always seems to be too windy! When fishing low tide conditions, we very rarely groundbait any more than just the occasional slice mashed up and thrown in. 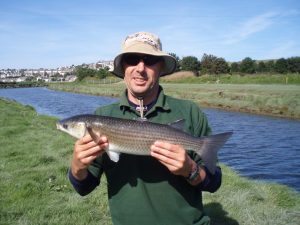 When the tide comes, it’s a very different kettle of fish. If you are lucky enough to be in the right spot when the first flush of tide arrives, the fish often turn absolutely suicidal. It seems for twenty minutes or so you can chuck any rig or presentation in front of them and they just hammer it. Once the tide really picks up though the flow is so fast that you need to seek out the few quieter spots where you can actually get a leger rig down on the bottom. Often this means fishing right in the margins, literally under the rod tip. The tide really does rip through and as a result the water is more often than not incredibly turbid, meaning groundbaiting is a necessity. Paternoster rigs are what we use mainly, but expect to lose some gear as it’s pretty snaggy!

This year for the first time Jenny and I have experimented with night fishing. We chose a swim slightly out of the town where there is little or no ambient light once the sun has gone down. The results were startling. Fish that had been reticent to feed in daylight hours went absolutely mad after dark with bites almost instantly as the lead touched bottom, pretty much every cast. I swear that after a while they were actually coming to the sound of the splash. Adjusting to the darkness and judging when to strike took some getting used to but after god knows how many missed bites I finally hooked and landed a fish of 4.09. Conditions since then have meant we have had to stick to day time fishing but it’s something I’ll definitely be doing more of next season. 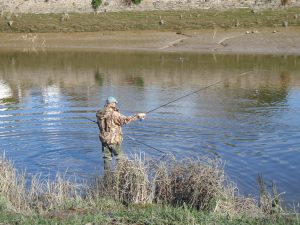 Over the last few years Wadebridge has exploded as tourist destination and as such there is pretty much every amenity you could need for a day’s fishing. There is easy access to the river throughout the whole town, but to fish effectively you really need to get down and dirty in the muddy areas. Hence wellies or waders are a must. The thick lips tend to average 2-4lb but there’s always the chance of a bigger one. My best so far this season has been 4.15. There is also a large head of thin lips. These tend to be around the 1-2lb mark and are taken on baited spinner. Thins don’t eat bread in this part of the world. Large areas of the river between Wadebridge and Padstow are completely untapped for mullet fishing, mainly due to access problems. The main access is off the Camel Trail cycle path which follows the river between the two towns, and I’m sure there are mullet swims right the way along for those willing to seek and find. And if you’re feeling really brave there’s always Padstow harbour where there are always mullet in residence. To sum up, the fish in the Camel may not be the monsters that you find elsewhere, but I think that’s more than made up for by two things – the sheer number of fish (three years ago I had 11 from one swim without moving) and the fact that the techniques you will need to use to catch them are probably totally different to what you will be used to elsewhere, making it fairly unique.