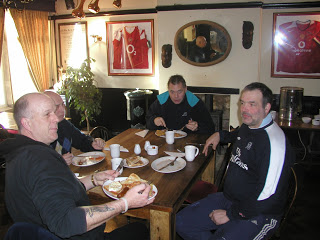 This match was due to be the annual ‘Open’ on the Isle but due to loads of rain the river was unfishable and the fixture was swopped to Dillington Pond. With only ten of us fishing it was more of a knockabout really, but still there was money to be won. For a change I actually drew away from the tree pegs and this week I was assigned the pumphouse, a peg I have never fished before. Although quite a consistent peg, I can’t recall it winning a match. The weather was pretty mild and although it was quite windy I expected the pond to fish. Also I had been asked to do a ‘Club Match Live’ feature for Southern Angler magazine so I had my camera with me to record the days events. I got to my peg and as I was setting up I was suprised by the lack of colour in the pond and I hoped it wouldn’t affect the fishing too much. On my right was John Coxon, a Dillington virgin, and I had Digger Denslow to my left on the point. Justin Charles had drawn one of the pegs by the stream, a very consistent peg. I set up my usual 0.4 gram rig with 0.12 mm bottom and size 18 B611 and plumbed up by the bush to my left, this had a nice depth but when I plumbed up at eleven metres in front of me the float just kept going! My rig was nowhere deep enough so I set got out a deeper rig, a 1 gram Drennan Tipo with a spread bulk, 0.08 mm bottom and size 20 B511 for the roach.

On the whistle I cupped in some choppie by the bush and two balls of Sensas Roach Noir groundbait at eleven metres. I noticed Justin use his normal balling in tactic, would it work today? Also several people including Digger and John started on the waggler. I shipped out on the longer line with double maggot fully expecting to catch straight away and the float just sat there! Digger had a chub followed by a succession of small perch and I could see Justin swinging in perch regularly. With no bites I decided to try by the tree, this also seemed devoid of fish and I was beginning to think my bad run of results would continue.

John was also blanking and apart from Digger and Justin it looked like most the field were struggling. My nemesis had caught a couple of small perch but once again he’d declined a side bet so at least I couldn’t lose that! Barney was walking so I guessed he hadn’t caught much either, Big Frank Woodard had snared a couple of chub and was looking good for a frame place. With over an hour and a half gone I was now fishing by the bush with a small piece of worm looking for a small stripy. I was starting to think I would blank when the float finally submerged from view and a small perch was swung to hand, a couple more followed before this died again.

The wind was now really quite strong, making presentation difficult and poor old John came up to see how I was getting on, I was now on the long pole and while we were talking I noticed a slight dip of the float. After John left me it developed into a proper bite and another small perch took my tally to four, at least I was now getting the odd bite. Next put in with double bronze maggot, the rig had only just settled when it went under and I was into a better fish. I gingerly played it before netting a 10 oz roach, a smaller sample followed and things had started to get interesting. With two and a half hours to go it would be a long way back to catch Justin and Digger but you never know.

I would get a couple of roach before it would go quiet, I was now fishing with caster hoping to avoid the perch and was having to wait longer for the bites but the result was normally a roach. I reckoned if I could get around twenty roach it would give me 5lb or so and a chance of some money. Both the leaders were catching odd roach but their swims were definately slowing. As the end of the match approached and the light started to fade I noticed more landing nets being pushed out, Rob Cox landed a perch, Neil Dring had a chub and Justin added a chub to his already bulging net. With ten minutes to go I was a couple of roach short of my target when I hooked some weed and the 0.08 mm hooklength gave way. I reached for my other rig and went back to the bush (which I had also been feeding regularly), with double maggot on and had a bite straight away which turned out to be another small perch. I slipped a caster on and with five minutes to go the float buried and a much better fish was on, after a spirited battle the blue hydro did it’s job and I safely netted a chub of a pound and a quarter. Janders preparing to weigh Digger in, but had he done enough?

There was just time to ship out again but the dream ending never materialised and I ended with 29 fish (1 chub, around 18 roach and the rest perch). I followed the scales around and Digger was leading with 7lb 2oz, Frank ended with five chub for 5lb 11oz and there were no more decent weights until we got to Justin. He put an impressive 8lb dead on the scales and with only John Coxon and me to weigh, I knew he’d won it. John had dry netted and my fish went 5lb 15oz for 3rd on the day behind Justin and Digger. They were only paying the top two but I picked up £20 for the section and Frank won the other section. Justin with his winning 8lb and Digger with his second placed 7lb 2oz