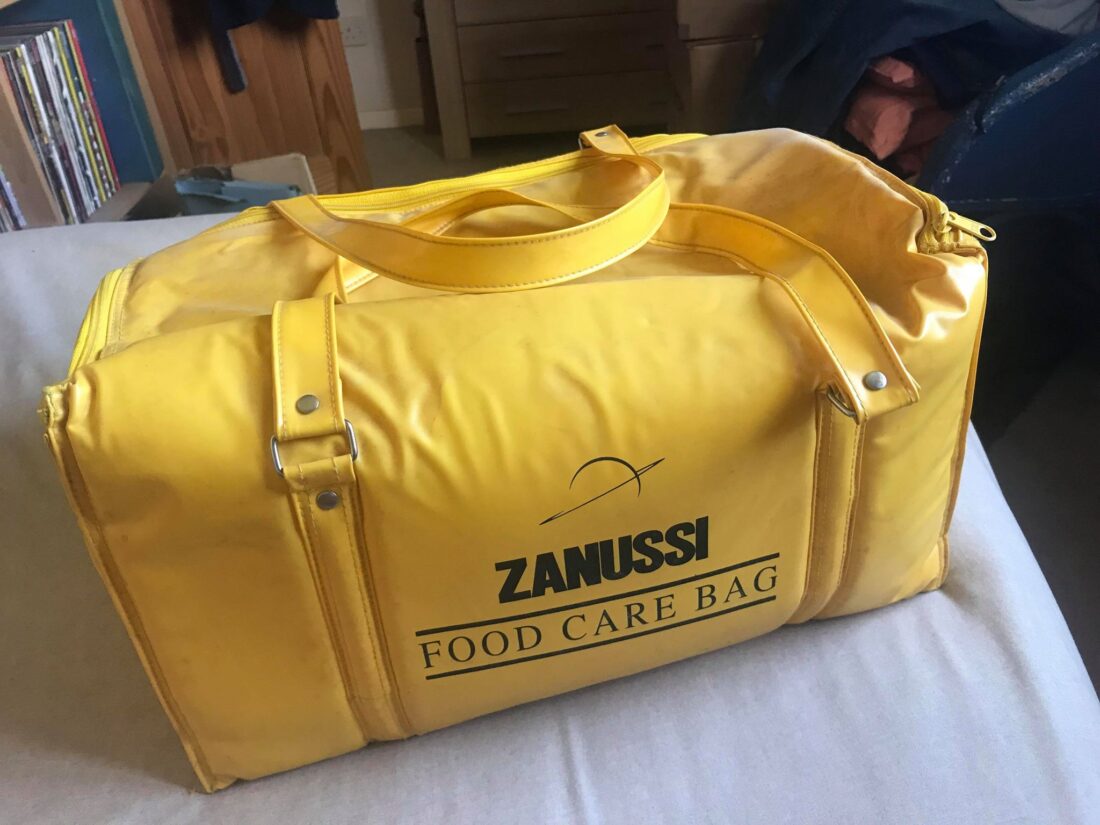 It was a few weeks into the year before I had a match worth talking about here, it was a Chard AC fixture on February 18th and I pulled out peg 37 at Donyatt where Scotty Russell had the big weight last year (see Part 10 – 1995). I got there and it looked lovely with the odd fish topping, I only set up one rig, a fairly light float with number six elastic through the top kit. My first fish was a trout which wasn’t a great start but then I had a dace to get me up and running. I then missed a few bites before hooking a big chub which tore off and snagged me and I lost the fish, the rig and the elastic!

Not wanting to lose anymore big fish, I set up again but this time with a heavier rig and a tight number eight elastic (which was as heavy as it got back then). I had another dace but bumped and pulled out of loads and it was just basically all wrong and I was cocking up a winning peg! I finally got my head sorted and set up yet again but this time with another light float and a number four elastic. This was much better and I started bagging, by the end of the match I had 45 roach and dace (which included some clonkers), 3 chublets and a gudgeon for 14lb 10oz and I knew that if I didn’t win the match, I should have done!

Back at the results and I ended up in third place behind Rob Doak with 14lb 15oz (ouch!) and Geoff Facey with 15lb (double ouch!). I still picked up £45 for the top weight at Donyatt and £30 for third in the superpool but opportunities to win matches don’t get better than that and poor preparation cost me that day.

The following week it was an Ilminster match and I drew peg 126 (which is now known as Barney’s Bend) at Isle Brewers, a great peg but with the river up and coloured like it was on the day, it’s an absolute flier! I caught all day and ended with 91 roach (with some approaching a pound), 2 dace and 2 gudgeon for 18lb 4oz and first place on the day. I picked up £75 plus £42 from the superpool and a nice Zanussi coolbag courtesy of the leagues sponsor, Max at Ilminster Warehouse. Just a perfect day. 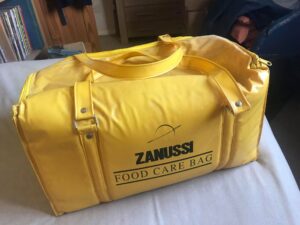 And I still have it!

The Chard Pairs League started on 31st March and it was very popular and keenly contested with 48 anglers fishing a series of six matches on four different venues. There were sections on Howley and Sadborow with two at both Perry St and Chard reservoir and the anglers would fish a different section every match. Some top anglers came from far and wide to fish the league including Tony Rixon, Pete Sivell, Mike Stone, Nicky Collins, Kev Rowles, Robbie Kepner, Ian Parsons, Mark Harper, Paul Garrett, Jan Hasnip and Allan Oram amongst others.

My partner was Andy Saunders and the section draw put me in with Mark Harper, Nic Saunders, Martin Heard, Steve Bush, Graham Skinner, Les Braunton and someone else whose name escapes me. For the league opener, I was on peg 8 in the Perry St low numbers section and Andy was on peg 1 at Howley. My plan for Perry St was to fish for small fish and feed a big bed of hemp and caster for a bonus carp or tench.

I started off well enough catching around 20 small fish and a slightly better skimmer in the first hour before trying my big fish line for the first time. The float sailed away and I was into a big fish, the trouble was there are some tree stumps in the water in peg 8 and straight away the fish was around them and I could feel the line see-sawing against them as the fish was swirling on the other side. I started gaining ground on the fish but then it was snagged solid and I couldn’t budge it, then the inevitable happened and I lost it, waving goodbye to a section win and a precious 8 points in the process.

I weighed 1lb 2oz, only beating two in the section, Mark Harper won the section with 3lb 14oz with Graham Skinner second with 3lb 7oz (which included a bonus 2.5lb tench). Andy fared better, winning his section with 18lb 5oz and as we were in shares, I ended up with £20, cheers mate! So after the first round we were on 11 points.

Round two on 14th April put me on peg 9 on the resi low numbers while Andy was on Perry high, my peg was a bit of a snag pit and I lost loads of feeders and hooklengths but I did alright and was keeping in touch with Mark Harper until he came in on his pole line and battered me to win the section with 16lb. Nic Saunders was second with 14lb which included a handy 8lb carp and I ended up third with 11lb 12oz which gave me 6 points.

Andy came back with a brilliant 5lb odd for 7 points so that was another £10 each and after two matches we were actually in second place in the league with 24 points behind Tony Rixon and Pete Sivell who were way out in front with a perfect 32 point score!

The third match was on 28th April and I was at Sadborow on peg 9 and Andy was on end peg 24 on resi high. I’ve struggled for a few small carp, three skimmers and a 1.5lb eel (on double squatt!) for 9lb and 6 points which was a long way behind Bushy with 21lb and Mark Harper made it three section wins out of three with 25lb. Andy won his section with 31lb which included two carp and I almost felt bad about pocketing another £20 (I did say almost!). We were still second with 38 points but Rixon and Sivell both won their sections again and hadn’t dropped a point yet to lead with 48.

The following weekend was a Bank Holiday and Les used to run some two day matches at Howley and Sadborow, the first day I drew peg 7 at Howley which was my favourite peg and I had a lovely day catching seven carp, nine skimmers and a few bits for 21lb 8oz and first on the pond to give me a chance going into day two. It should have been more as I lost eight carp! Ray North was second with 12lb 15oz which included a nice ghostie of 6lb 10oz. The Hoff won the first day at Sadborow with Graham ‘Dino’ Pepper second.

At the draw the next day, when I pulled out peg 3 which had won the previous day, everybody was saying it was all over but match fishing is never as cut and dried as that and very often it can kick you up the bum! I started on the inside but never had a bite and was already behind Les Williams, Bushy and Brian Moss who all had a couple of carp. I went out to 11 metres and had three skimmers and a carp but Les Braunton was now catching as well and I was probably fifth on the pond and out of it.

There was a thick layer of scum between me and ‘Rocking’ Roy Fowler on the next peg and with an hour and three quarters left there were some carp moving about under it. We both started fishing it, I missed a bite and then lost a fish while Roy had two quite quickly and I was dropping further down the section. Then I’ve had three in three chucks and all of a sudden I needed one more to go from nowhere to winning the section but I didn’t get it. Les B won the pond with six carp for 9lb 8oz, Mossy was second with 8lb 11oz and my four carp and three skimmers put me third with 8lb 10oz and I was convinced that 1oz was going to cost me.

We went back to the Cotley Inn for the results and my 4 points was enough to win it and I picked up a very nice £100, then there were four anglers on 5 points with Dunner taking the verdict on weight ahead of Dino and the Hoff.

Round four of the pairs put me on peg 11 in the high numbers at Perry St and Andy was on resi low, I fed a big fish line with hemp and caster again but never had a fish over it and my 3lb 7oz was made up of around 70 rudd and roach on the whip giving me 5 points. Graham Skinner had 3lb 9oz. there was a 9lb weight (3 tench) and Nic Saunders did well to win the section with 16lb which included a 13.5lb carp and a tench.

Back at the Cotley and Andy came back with 7 points from the resi where he had 16lb so another tenner came my way and I could get used to this! Rixon and Sivell actually dropped a couple of points but were still ahead by a mile and Nicky Collins and Mike Stone, who’d been breathing down our necks, were now on the same points total as us with 50 and with two rounds to go it was all getting a bit tight!

Well, this post has turned into quite a long one so I’ll split it into two (I don’t want you all getting bored!) so check back soon to see if we held on to our second spot in the pairs and to see if I ever gave Andy some money back!