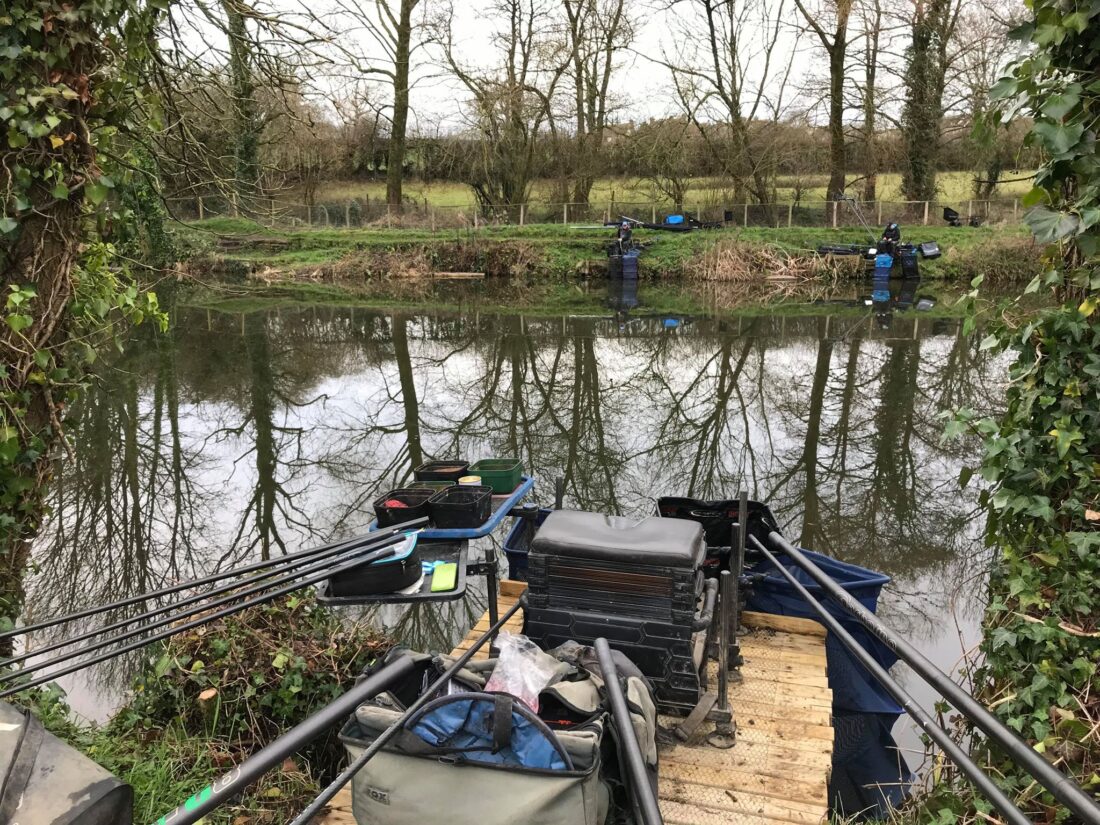 For the last outing of the year I booked into the Chard match at Perry St and I have to say it’s nice to just be able to turn up for breakfast and not have to worry about pegs, pools and everything else that goes with running matches. We met at ‘Spoons and the hash browns were back, was this a good omen for the day ahead?

With our bellies full, we headed to Perry St to do the draw, it was great to see a lot of the Chard lads including Picky who I hadn’t seen since his operation and he was on good form! The Hoff announced the draw and I pulled out number 16 which has been moved and has a nice new platform since the last time I fished it. The Tart did his usual and pulled out corner peg 10, probably the most consistent peg on the pond, I mentally braced myself for a battering and handing back my precious piece of Torquay gold.

I got to the peg and I had loads of room with an empty peg to my right and three to the left! It was still ridiculously mild considering it’s December and while we were setting up, there were quite a few carp moving about. 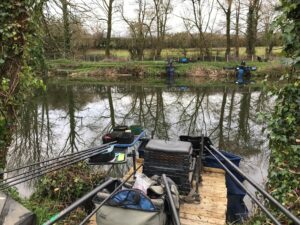 A slightly different view from peg 16!

I set up three rigs, a Drennan 0.4 gram Carp 1 for 11.5 metres straight out plus another line at the same distance but angled to my right and also for the top two plus two line, a 0.3 gram Drennan Margin Crystal for dobbing bread and a little handmade pattern for the margin to my right by the cormorant roost. On the side tray, I had Bait-Tech micros and 4mm Carp and Coarse Pellets plus dead reds, corn, bread and and some 4mm Xpands.

Bushy on peg 5 opposite hooked and landed a carp on a bare hook and then not long after, Oz up on peg 11 did the same, so they were obviously hungry then! Hoff got us underway with a slightly better toot on his whistle and I cupped in micros, dead reds and a few bits of corn on the top two plus two line and at 11.5 metres straight out and then the other longer line I fed a bit more positively. I started with punched bread by the floating fish refuge and had a few knocks before catching a tiny roach so switched to the biggest punch I had.

Les on peg 7 and Bish on 8 both flew out of the blocks catching a couple of carp in quick succession, I could see Les was catching on bread so I shipped out to 11.5 metres and after five minutes or so, a good bite resulted in a 2oz roach but as Hoff and Bushy had both now caught carp and Les and Bish were on three fish each, I had to do something else. I picked up my depth rig, went out and toss potted in a pinch of micros and two grains of corn, I lifted the rig and as it settled, the float buried and a decent fish was on. Shipping back it didn’t give me any problems before a nice big mirror of 6-7lb wallowed on the top and went in the net – great start!

I had two more carp around 3-4lb to put me on three after an hour, Les now had five or six, Bish was on three and I could see the Tart netting odd fish, it was fishing well. I was getting quite a few indications and there were fish blowing on my longer line as well as the odd bubble coming up at top two plus two. No more fish straight out so I tried the other longer line but after ten minutes, I’d only had one indication so I cupped in some more feed before coming in on the top two plus two line.

After five minutes or so, the float slid away and I hooked into a right lump, it just plodded around and I couldn’t get it’s head up, when it eventually surfaced it was a big fish, 8lb plus and I wanted to make sure I landed it safely which led to much faffing about on my part. I got it half in the net a couple of times which prompted Les to say I needed to stay behind for netting practice and that I wouldn’t mention my rubbish efforts at landing the fish on the blog (there you go Les!). When I eventually got it in the net, there was a rather worrying creaking sound and I thought my landing net pole had broken but it was the thread that had gone on the net itself!

Thankfully I carry a spare so was soon back in action and next chuck had a small carp to put me on five after two hours and I really thought I was on for a big weight. You can probably guess what’s coming next and I went from getting quite a few indications to struggling. Les had slowed up after a frantic start and Bish was still on three fish, it looked like the Tart was catching well and I thought he was miles ahead of everyone else.

I did manage another fish from the longer line and then pulled out of one which may have been foulhooked. Hoff was on seven or eight carp and Bushy wasn’t far behind so as we reached the halfway point, there were still lots of people within a fish or two of each other. Derek down on peg 1 had four fish and apparently Dunner opposite on peg 20 was catching a few as well. Exeter Mike on peg 2 had a couple of carp and was looking good on his new sexy Preston box!

I kept switching lines but not a lot was happening, I tried expanders and dead reds but the only response was a small roach which dropped off! I was feeding 4mm’s by hand on the top two plus two line and by the cormorant roost but wanted to leave that until the last hour or so before dropping in on it. The next sixty minutes was really quiet for me and I didn’t add anything to my tally whereas Hoff and Bushy had a run of fish from their short and margin lines. Picky turned up and he wasn’t having much fun, he’d only had one bite and had filled it in before going for a wander.

With about an hour and a half to go, I had my first look on the margin line, I had a few knocks before catching carp number seven but it certainly wasn’t solid. There were still bubbles coming up on the top two plus two line so I went back in and the float sailed away, as soon as I struck, I knew I’d foulhooked a big fish. I had it on for a little while before the rig came back with a huge scale on the hook!

I had another decent carp with thirty minutes to go and started to think if I could get a couple more, I wouldn’t be too far away. Time was ticking away and when I missed a couple of bites, I thought I’d missed my chance. Then, with two minutes to go, the floats gone and I was into a carp which I safely netted five minutes after the all out. That put me on nine carp which I thought would give me around 35-40lb. The Tart shouted down to ask how many I had and said he’d had eleven which surprised me as I thought he had a lot more than that. The Hoff had fourteen, Bushy had eleven, Oz and Dunner were both admitting to nine carp and Les had a similar number, this was going to be close.

The scales started with Derek on peg 1 and he weighed 29lb 14oz which included a nice tench, Exeter Mike didn’t weigh and headed home to polish his new box before we got to Hoff who went into the lead with 58lb 12oz, Bushy wasn’t far behind with 52lb 12oz and Les had 34lb 10oz. Bish didn’t weigh and then the Tart went into second place with 54lb 14oz. 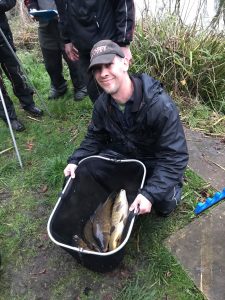 Derek had 29lb 14oz which included a nice tench 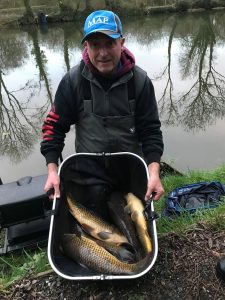 Hoff had 14 carp including some lumps for 58lb 12oz 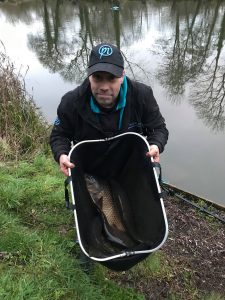 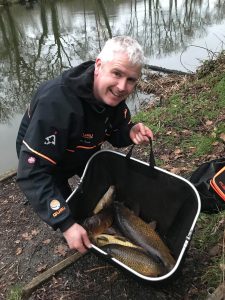 Oz weighed 39lb 14oz on peg 11, Picky didn’t weigh and then Mark G had 34lb 8oz from peg 13, Butch weighed 29lb 11oz which included 3lb 8oz of silvers. I was next and after two weighs my total was 46lb 6oz. Last to weigh was Dunner who had rather more than the nine carp he was admitting to and pipped me by 12oz for the section (can’t lie straight in bed that man!). So a really enjoyable day’s fishing for the last match of the year and it was very close with only a couple of fish in it. 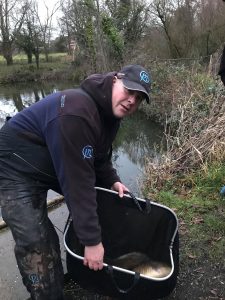 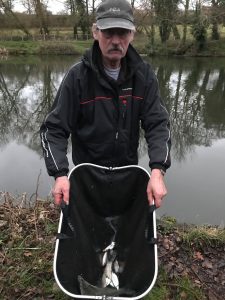 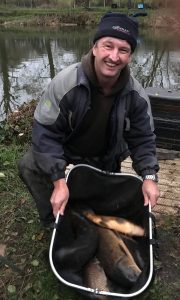 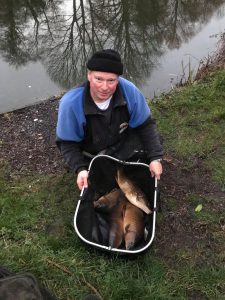 Dunner won the section with 47lb 2oz from peg 20

As Exeter Mike has treated himself to a new box, he’s selling his Matchbox S Class, it’s in excellent condition and comes with loads of accessories (note – contents of box like winders, feeders etc not included). He’s asking for £250 so if you’re interested contact me and I can put you in touch with him. 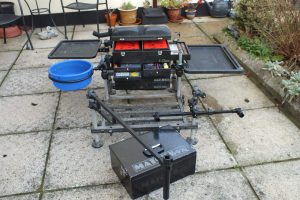 Comes with loads of accessories

So that’s it for 2018, it’s been a great year (check out my yearly review coming soon) and I’d like to say a massive thanks for all the support, great feedback and people who took the time to vote for the blog, I really appreciate it.

That just leaves one more thing to say and that is ‘Happy New Year’ and tight lines for 2019!