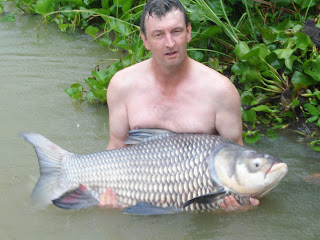 With Scotty unable to come this year I was a little apprehensive about going to Thailand on my own but everybody at the fantastic Gillhams resort made sure it was a trip to remember. Stuart and his lovely wife Benz, Sean and Noi and of course the fantastic guides, Golock, Joel, Chris and Lee all made sure I had an amazing time. An added bonus was that Terry ‘Poppa’ Eustace was there for most of my stay and he really is a legend, many of the other guests were lovely too and I made too many friends to mention but I can’t not mention Danish Tommy and Alan Boon and his mate Steve. For the first few days I got involved with filming for a match against Zeb Hogan from National Geographic, it was Sean, Joel and me versus Zeb where Joel was the eventual winner for the biggest carp and won $200, I won $100 for the prettiest carp and Zeb won a crate of beer for the coolest fish!

It rained solidly for the first two days and the fishing was a little slow although I did manage that 66lb carp above (which was a new personal best) and a nice Amazon Redtail. Also there for my first few days were Mike Ward and his lovely wife, Mike runs a great little Thai angling website, check it out here www.mikejwardthaiangling.co.uk/#/articles/4557447543 it was a pleasure to finally meet and fish with him. Their company was fantastic at dinner and I hope our paths cross again. I also met Mark Hoye who has a Facebook page which has loads of great user submitted photos, have a look here Fishing in Thailand

After those first few wet days, the weather was scorching and we just had the odd shower, I caught some awesome fish and upped my personal bests for several and added a couple of new species.

I also managed a couple of fish from the lure lake catching my first ever fish on a lure.

We also had some great nights out in Amy’s and enjoyed some fantastic meals in local restaurants.

I really can’t describe how much I love the place and I can’t wait to go back, check out the Gillhams website at Gillhams Resorts