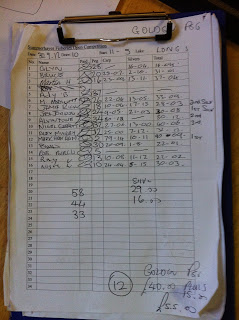 After two weeks in paradise I was back at Summerhayes today, the match was on Longs and I was quite looking forward to it as I haven’t fished this lake for a while. Alex Murray was fishing today and he’s off to Gillhams fairly soon with his family – lucky bugger. I drew peg 18 which is a decent silvers peg and had Bruce Hunt two pegs to my left and Heardy two to my right. The wind was awful, blowing right across our pegs and it was a job to hold the pole at 10 metres. I set up the usual two rigs, both 0.4 gram Malman pencils, one with a spread bulk and the other with a more positive bulk. For bait I had the usual micros and 4mm Bait Tech expanders but today I also had some 6mm meat as Scotty said he’d caught well on it in the last Weds match, which he’d won.

The second hour was a bit of a nightmare with the wind being a right pain and I only added a couple of small fish and missed several bites, a quick try over my meat line resulted in one decent roach and the more positive rig over my pellet line just resulted in more missed bites. After such a good start, I was going nowhere fast and to make matters worse, Heardy was catching good skimmers on his carp rig! I decided to fish a section shorter at 9 metres where I could hopefully present the rig a bit better. Two small blades at least told me there were some fish there so I cupped in half a pot of micros and started getting the odd good skimmer amongst the small fish and seemed to be doing better on silvers than anybody I could see.

At the halfway point Bruce wandered up to Martin and said he’d had seven carp, Heardy had three decent carp plus some quality skimmers, Bruce went to see how the other anglers were doing and came back and reported that 40lb would be a good weight today! I tried meat over my new shorter line and had to wait ages for a bite which I then missed! I was still getting some good skimmers of 1.5lb+ but would only get a couple before reverting to just getting odd small fish. I did lose a good one that came off on the way in and dropped off a 6oz skimmer that I tried swinging in when I should have netted it – doh! I did get a nice little tench of 12oz but had no clue what weight I had (no change there then!).

I was hitting more bites on my shorter line and with an hour and a half to go, I hadn’t hooked a carp yet! Famous last words as I then hit my first carp and had another shortly after. I was still getting good skimmers and then had carp number three, as I went to put it in my carp net, it caught my rig on the way in and I ended up with the hook in my finger – ouch! Still no harm done I thought but then saw I had bent the bristle of my favoutite Malman pencil in half – disaster. I gently bent it back into place and hoped it would last out the match although I did still have the more positive rig if it did give up the ghost. I felt I was just ahead of Heardy on silvers and Bruce was still carp hunting and catching fairly well.

I had two more carp to put me on five and added a few more skimmers in the last part of the match to finish with 41 silvers, I had no idea what weight I had and thought I might scrape 12-14lb which I didn’t think would be enough for a pick up today. I packed up still mourning the death of my favourite float and went to watch the weigh in. Alvin Jones had already weighed and was leading with a fantastic 80lb 12oz of carp, Nigel Garrett had 40lb 6oz which included 13lb of silvers, Glynn Wickham had 16lb 4oz of silvers and I was pretty sure I didn’t have that, Martin Addicot had 13lb 5oz of silvers and I was wishing I’d fished shorter an hour earlier. Jess Jordon had fished all out for silvers on peg 24 and weighed an excellent 21lb 3oz and I thought that was that as him and Glynn would fill the two silvers places.

Bruce had 31lb 1oz of mainly carp before it was my turn, my five carp went 10lb 4oz before I lifted my silvers net out and I was relieved when my weight was called out as 17lb 15oz to give me a 28lb 3oz total. Again I was left cursing that poor hour when I struggled at 10 metres. Heardy had 23lb 9oz of carp and 13lb 11oz of silvers and had lost a couple of carp that would have seen him frame. I was lying second in the silvers but there were still several anglers to weigh including Ray and Nigel Wickham who normally fish for silvers. Ray had 11lb 12oz but had lost several fish and Nigel had fished mainly for carp and weighed 30lb 3oz. Several anglers had taken early baths and Mark Hanham was admitting to around 50lb but actually weighed 90lb 9oz and is worse at estimating than me!

So I finished second in the silvers and picked up £16 which stopped the rot for now, I also won a squid off Glynn but haven’t had it yet.

Next week I’m back on the Isle and it will be interesting to see how it fishes after all the floods we’ve had so far this year.