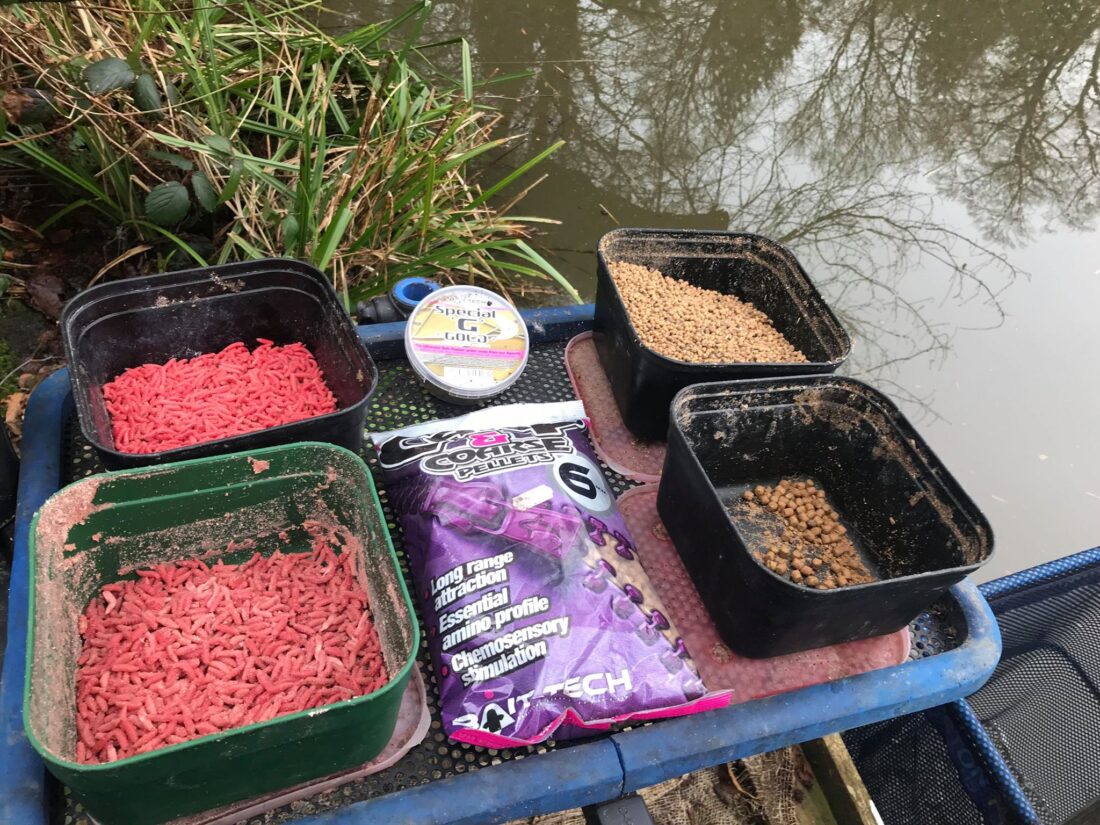 I wasn’t sure where to go this weekend so when the Tart said they were having a knock up at Sadborow I said I’d be up for it, even if it did mean having to spend the day in the Tarts company! We met at ‘Spoons and over breakfast, I happened to mention that I didn’t fancy pegs 3 or 6, the former hasn’t done much in recent matches and the latter is just awkward to fish so of course Smithy was winding me up saying I’d talked myself into drawing one of them.

As the draw bag started doing the rounds, I was convinced I’d end up on peg 6 so when Chris said he’d drawn it, I felt it was safe to go in the bag, I had a look at my peg and my initial relief that it wasn’t peg 3, turned to disappointment when I saw the number seven staring back at me, it hasn’t been great and even the Tart turned his nose up at it! As for the Tart, his drawing hand continues to be on fire as Little Jack Horner was on corner peg 8 this week.

We got out the pond and so far it wasn’t snowing, raining or windy for the first time in ages and although not t-shirt weather yet, it was certainly a lot milder than it has been of late! There were carp everywhere and I was hoping I’d be able to catch a few shallow. The first rig I set up was my favourite little inline dibber (surprise, surprise), followed by a 0.3 gram Drennan Crystal Margin float for the inside to my left and lastly a 0.4 gram Drennan Carp for the top two plus two maggot line. 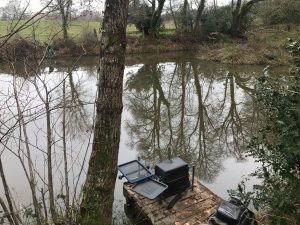 The side tray contained the usual dead and alive red maggots, softened micros, groundbait plus 6mm Bait-Tech Carp and Coarse pellets. The Tart was saying the bread had lost it’s edge and that he didn’t even have any with him today, then Les shouted the all in and loaves of bread miraculously appeared out of his and Smithy’s bait bags, I did wonder if their next trick would be turning water into wine! 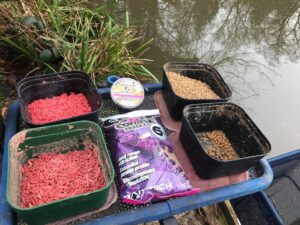 I’d seen that Bud Light advert in the week and said ‘Dilly Dilly’ a couple of times which raised a smile from Superintendent Smith but it soon became apparent that it intensely annoyed the Tart which was like a red rag to a bull and me and Smithy then proceeded to say it at every opportunity! I cupped in three balls of groundbait containing micros and dead reds on my inside line before banding a 6mm pellet, shipping out to 11 metres and pinging out a few constantly while also feeding maggots by hand on the shorter line.

Bread heads Les, Smithy and the Tart all started fishing shallow with a big piece of punch and Les had one nearly straight away, followed by the other two Warburton Wombles and when they’ve all gone back out again and straight into another fish, I thought the writing was on the wall. The Tart had his third carp which prompted him to say that he thought it was too early for the pellet and that they were shying away from it. With that, my float buried and I was into my first fish, ‘Of course they are’ I said ‘Dilly Dilly’!

I had a really good spell adding several more carp in quick succession and had gone in front of the bread boys which saw Corporal Smith rummaging in his bag for some pellets and the Tart wasn’t far behind. I had seven carp after the first hour although I did have some squeakers and there wasn’t much between me, the Tart, Smithy and Les as this early stage. Yardie on my right had a couple of fish, Shane and Picky behind the island were also off the mark although Butch and Chilly opposite on pegs 2 and 3 were struggling.

The second hour saw things slow up even though there were still loads of fish cruising about and of course this led to people trying the inevitable mugging/dobbing/stalking/slapping, all to the cries of ‘Despicable’ and ‘Dilly Dilly’. I had four more carp in the second sixty minutes but nobody was running away with it and you’d get a couple before it went quiet and then somebody else would catch and it was almost like the fish were just swimming around the open water in a circuit. At one stage I was making a hash of landing a fish and Les commented on it followed by the Tart saying I needed to stay behind for netting practice!

Then the Tart mugged a big ghostie that looked to be 7-8lb and by my reckoning that put him in the lead although his clicker still appears to be broken as during the day he was asked several times what weight he had clicked and it was going down with every fish he caught! Yardie started catching well on the deck on his short line and every time I thought about trying mine, I’d either catch a fish or a pod of carp would head my way. I did mug one carp on just a top two when I saw it in front of me and just flicked the rig out and watched it take the pellet!

After three hours, I had a go on the short maggot line and had a small carp but it didn’t feel like there were many fish there and with probably 80% of the fish being caught shallow one way or another, I didn’t stay on the deep rig long. The Tart mugged another big ghostie and when he added another lump, he probably had 20lb with just three of his fish.

Yardie was still catching quite well including a couple of decent fish down the edge on paste and going into the last hour although it was looking like the Tart would win again (despite him protesting otherwise!), it was going to be close between Yardie, Smithy, Les and me for the other frame places. Also judging by some of the efforts at netting fish it wouldn’t just be me needing extra practice, we would be hiring a bus!

Les shouted the all out and I’d ended up with 24 carp which I thought would give me around 60lb if they averaged 2.5lb apiece, the Tart was admitting to 60lb (definitely time for a new clicker!) although I thought he had closer to 80lb. Commander Smith got the cakes out and we went to start the weigh in with Picky who had 27lb, Shane weighed 30lb on peg 4, Chilly had 13lb 8oz from peg 3 and Butch didn’t weigh. 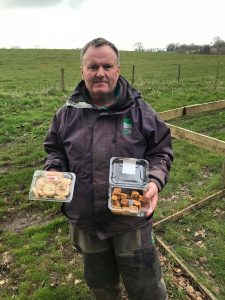 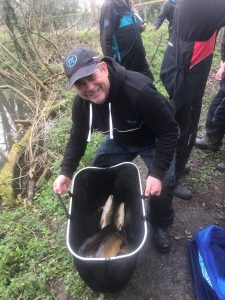 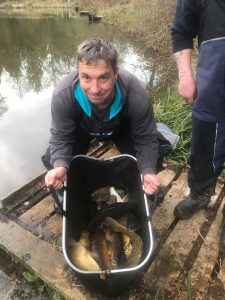 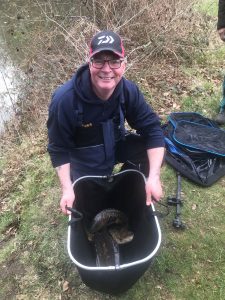 Les was admitting to 42lb and weighed 46lb 8oz so pretty close (maybe when the Tart finished netting practice he could stay on for the weight estimation class!), Starlord Smith had 61lb 14oz and I didn’t think I had that, then we got to the Tart and he was the only one surprised when he weighed 77lb 4oz. My two nets of carp went 58lb 2oz which was little less than I thought but I did have some squeakers, no photo though as I entrusted the Tart with the difficult task of pushing a big white button but he couldn’t quite manage it! 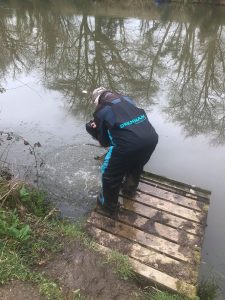 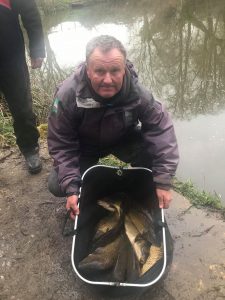 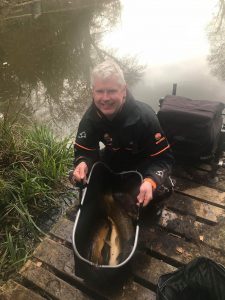 Smugness dial turned up to 11! 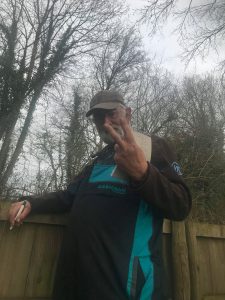 Chris was last to weigh and he had a 2lb 10oz skimmer plus two nets of carp and as Les was totting it up, I was convinced he’d just done me for third place but his total was 57lb 14oz – phew! He would still pick up though as we were paying the top four today. 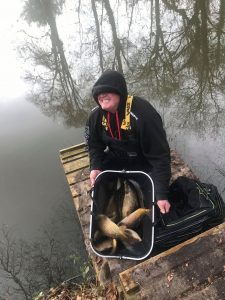 You’d never guess Chris isn’t a fan of having his photo taken! 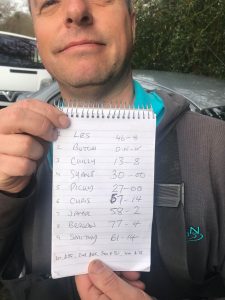 A thoroughly enjoyable day again and really close weights with only one fish separating second and fourth place although the majority of the fish do seem to be in the open water rather than round the island. Once again the banter was top notch and hopefully we’ll see some warmer weather now. On the downside, even though I picked up £50 for third place I lost a nugget to the Tart and the score is now 4-1 to him and at this rate, I’ll have to change my mobile number!

That just leaves one more thing to say…….

Check Out – My latest review