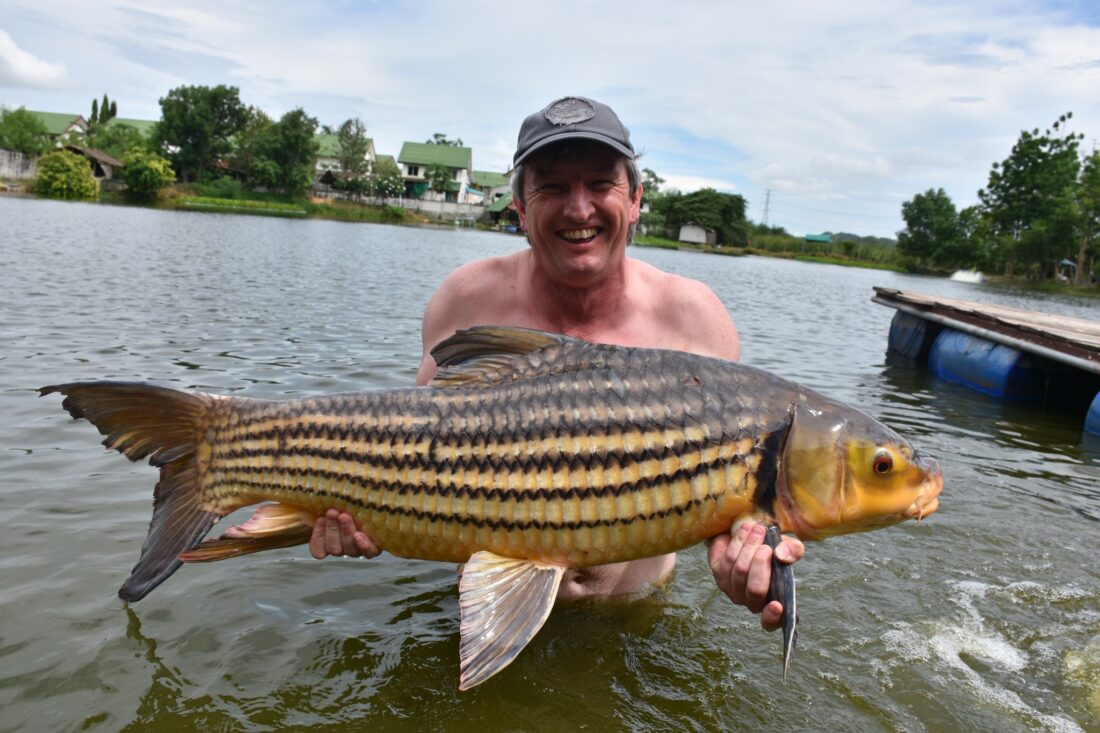 I didn’t manage to make it over to Thailand last year so booked three weeks in April and May with no real grand plans apart from lots of relaxing, eating and drinking. Of course I couldn’t go to the Land of Smiles without doing some fishing and booked four days at Palm Tree Lagoon, a fishery I’ve seen and read so much about, home to some truly massive monsters and loads of different species.

After the long flight I met Bell at the airport and then a taxi (arranged by PTL) took us to the hotel as there is no onsite accommodation at the fishery. The next morning Tim picked us up and after a short drive we were at the lake, whilst having coffee I watched some big arapaima in the stock pond and couldn’t wait to get started. For the first day I was in the sala on the opposite side of the pond and there were fish topping all over the place.

First fish of the trip was a 33lb Amazon redtail catfish on worm which put up a great scrap on a little float rod. The weather was quite unsettled and we had a fair bit of rain during the day which Tim said wasn’t great for the fishing, I did have an Asian redtail catfish of 15lb. There was a Japanese couple fishing on the pontoon opposite and the lady hooked into a beast that then went on a tour of the whole lake, a monstrous Mekong was eventually caged and estimated at a massive 380lb, now I’m not a fan of these hard fighting fish but I’d have made an exception for this magnificent creature! 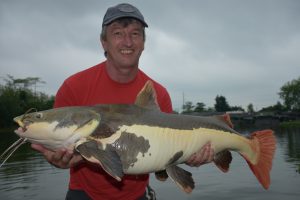 33lb Amazon redtail, a nice fish to open my account* 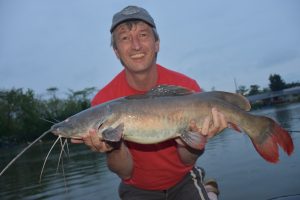 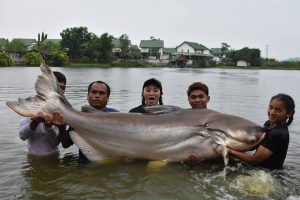 A massive Mekong estimated at 380lb*

After dinner, the couple left (exhausted after the battle I should think!) and Tim asked if we wanted to fish on the pontoon for the rest of the day, it was fairly quiet but right on last knockings I had a striped catfish on the laam with a pop up boilie, estimated at 45lb it was a new pb for me. Tim and his daughters then took us to the Cowboy café for a nice meal before dropping us off back at the hotel. 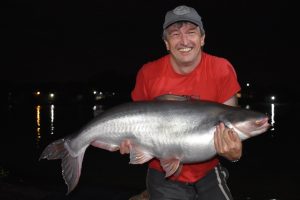 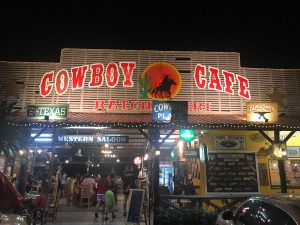 The second day dawned and it was an altogether different day with blue skies and the temperature had already ramped up a few degrees. We were back on the nearside pontoon and Tim said it would fish better today and he was not wrong! The first fish was a lovely Siamese carp of 62lb followed by more Asian redtails and two lovely Amazon redtails of 70lb and 60lb with the latter having an beautiful, unusual dark colouration. 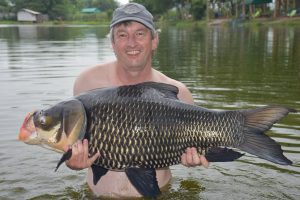 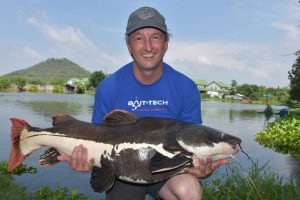 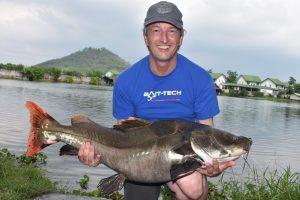 The action carried on through the day with a new pb mrigal of 11lb caught on fish guts!, plus a vundu catfish and two more Siamese including one of 68lb as it got dark. All together 11 fish of 5 different species on day two. 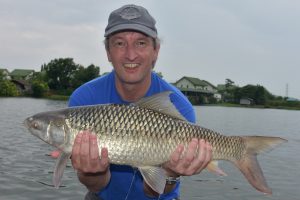 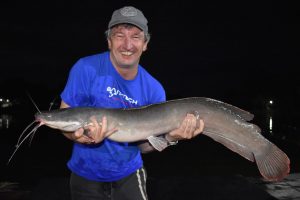 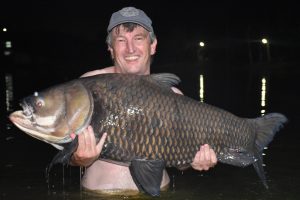 Day three and the weather remained very hot and the fishing got better and better, first fish of the day was a wallago attu around 25lb and I ended up with three in quick succession. More Asian and Amazon redtails put in an appearance, before another mrigal upped my pb to 15lb. Then one of the carp rods screamed off and I hooked a fish that took off at such speed, I struggled to keep in touch with it, Tim said he thought it might be a Julien’s Golden Price carp and he was right when an absolute beauty of a fish surfaced. Estimated at 73lb, I was blown away, a stunning fish. 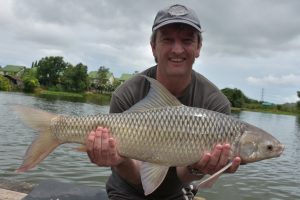 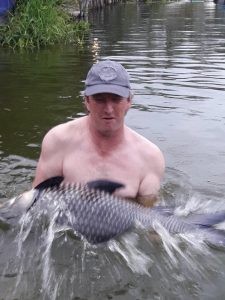 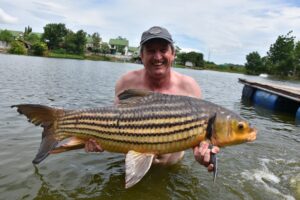 Not long after, the same rod went again and as soon as I struck, a big fish surfaced which I thought might be a bighead carp but when it was netted, Tim confirmed it was a Chinese Silver carp, a new species for me and at 65lb, another cracking fish! 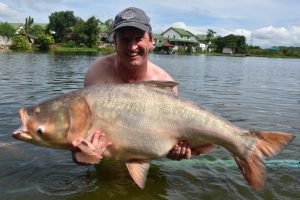 Chinese silver carp of 65lb, a new species for me*

It didn’t end there either, I had a little waggler rod out in the margins with bread hoping for a black shark minnow and I had missed a few bites and lost a fish but then another bite on one of the carp rods saw me hook what felt like a small fish and the target fish had taken a boilie! At around 15lb, it was another pb. 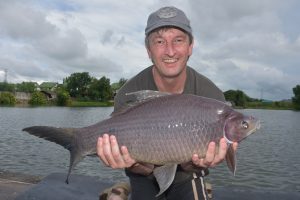 The next fish was an albino pacu of 23lb, yet another pb and Tim said there were only two in the lake. I also had a couple of nice redtails and Bell joined me for a photo with one of them. The total after a brilliant days fishing was 14 fish of 9 different species. Another lovely meal at the Cowboy finished off a fantastic day. 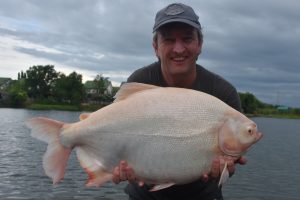 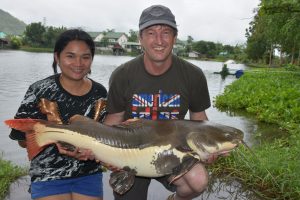 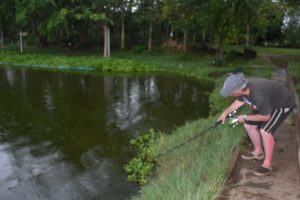 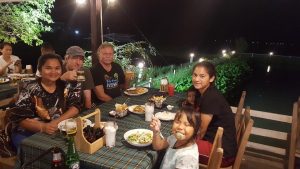 A lovely end to a fantastic day*

The final day arrived and the rain returned which slowed the fishing up, I had a couple more Asian redtails (one of around 8lb on the float rod), I also had a lovely Catla carp of around 30lb (yet another pb). I did lose what looked like a big Siamese at the net and also foulhooked a prehistoric little sucker fish on the float rod which I’d have loved to have caught fairly and added to my species list. Another big Mekong of 300lb was caught by another angler right at the end of the night, the size of these fish has to be seen to be believed! My final tally was 31 fish of 12 species in four days fishing. 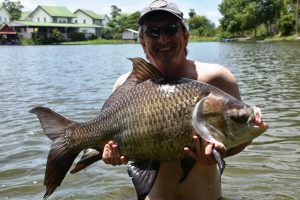 Catla carp of around 30lb* 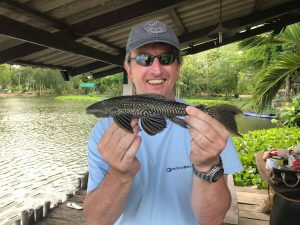 They don’t always have to be big to be beautiful, shame it was foulhooked! 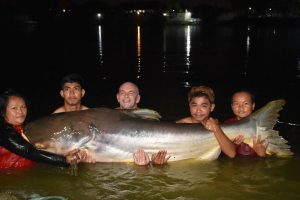 A final meal at the Cowboy before it was back to the hotel and then off to Bangkok the next day for lots of eating, drinking and meeting up with friends. I have to say a massive thanks to Tim and Benny, their daughter Sue plus all the guides for looking after us so well and I’ll definitely be back to see if I can catch a monster and add some more species to my list. Check out their website – Palm Tree Lagoon