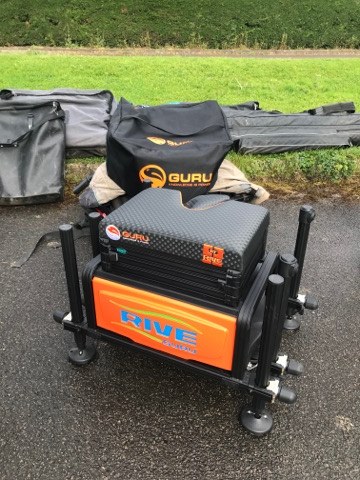 I was standing in for Picky again for this match and I was hoping I’d do better than the last time I fished for him! On the plus side, it would be very difficult to do any worse! On Saturday night we had thunderstorms with crazy lightning and the forecasters were saying there was a chance of more on Sunday – great! On waking up, the weather actually looked pretty good so hopefully they’d got it wrong, I met the others for breakfast at ‘Spoons and per usual the food is really good, it could just do with being a little hotter.

Les did the draw and this weeks sequence put me on peg 18 which hasn’t been great, the Tart was on peg 15 and Smithy was in corner peg 11 and with the opposite corner empty this week, he would either bag right up or the fish would back off into the empty peg, time would tell. The Tart had his new Rive Guru box and proceeded to put it on his trolley and parade it around the carp park for all to see! We also spotted a dummy on the floor which we think may have been the Tart’s that he spat out for not drawing a corner for the first time this year! I had Karl on my left and Mike C was on peg 17, opposite was Geoff on peg 3 who today was wearing a lovely peach coloured top, suits you sir! 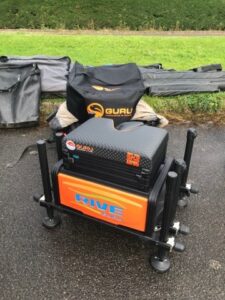 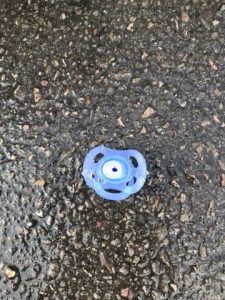 I assembled the usual rigs, an inline dibber to fish 6mm banded pellet at 11.5 metres, a Drennan 0.4 gram Carp 1 for the 5 metre meat line and a hand made pattern for fishing up the edge to my right at top two plus two. Today’s side tray had live and dead red maggots, 6mm meat, Bait-Tech Carp and Coarse 6mm pellets plus I mixed up some groundbait. 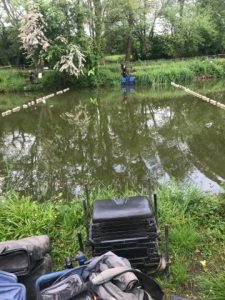 The view from peg 18

On the whistle I cupped in some meat at 5 metres, some loose groundbait and dead reds down the edge before starting shallow at 11.5 metres with banded 6mm pellet, odd carp could be seen cruising about but it certainly wasn’t black with them. Exeter Mike over on peg 6 flew out of the blocks with a couple of carp from his margin. Mike C also got off to a flying start with two carp and a skimmer on the feeder. I was feeding pellets and lifting and dropping the rig but after half an hour the only action was when the float went under and a carp bow waved off so maybe a liner.

Apparently Commander Smith in his corner was bagging already, Shane in peg 1 hooked a carp early on but lost it. I was just thinking it wasn’t happening for me shallow when after 45 minutes I hooked and landed my first carp of around 3lb. I really thought I might get a few, especially as Yardie on peg 2 had three carp shallow and lost a couple but after 90 minutes, I still only had the one fish. There were quite a few blows coming up so I tried my depth rig with a banded pellet on the longer line but never had an indication and I also tried meat with the same result. I wanted to leave the other two lines for at least three hours before trying them so went back out shallow. Odd carp could be seen swimming about but despite numerous attempts at mugging, they didn’t want to know.

It was really slow going, Karl and Shane still hadn’t caught, Geoff had one (and two perch), Oz on peg 5 had a couple and Exeter Mike was doing better than most with five carp. After about two and a half hours, Karl had his first fish and then not long after added a second. I was stuck on one fish but at least I was ahead of the Tart who was still blanking. After an overcast start, the skies had cleared and it was turning into a gorgeous day.

Then out of the blue I had my second carp, and then successfully mugged my first one to put me on three. There were odd bubbles coming up on the 5 metre line so with half the match gone, it was time to have my first look. I gave it ten minutes but no indications and then tried the inside line and no bites there either so back out shallow and the odd attempted mugging. It was sounding like Smithy had this one wrapped up a long time ago, Oz and Exeter Mike were both doing well with six or seven fish apiece and Mark G on peg 4 was hooking carp but getting beat up in the reeds.

In my section it was pretty tight and I knew Mike C had two carp and some skimmers so I thought if I could catch another carp, I had a chance of winning the section. I had another go at 5 metres and down the edge but still no bites so with an hour to go I was pinning my hopes on the shallow line. With only about 30 minutes left, I lifted the rig up and there was a fish on, it felt like a good fish although I was convinced it was foulhooked. I played it with kid gloves as I wanted to make it count and eventually slipped the net under a nice 6lb common, hooked in the mouth!

The bankside grapevine was saying that the Tart had three carp and an eel so hopefully I’d done enough to beat him but then Geoff put a spanner in the works by saying that Dunner had given the Tart a NPL (Next Peg Lesson) with five carp so I needed another carp! I did foul hook one briefly but it came off and that was the last of the action. As I was packing up I shouted up to ask Dunner how many he had and he replied saying four!

I took some kit back to the car and then we waited for the scales to start at peg 2 (Shane on peg 1 had already gone home), Chris had caught really well towards the end and weighed 32lb 10oz, Geoff had chucked back before Mark G had 9lb 8oz on peg 4. Then it was Oz’s turn and it was really close, his weight was called at 31lb 4oz and Exeter Mike also needed one more fish as he had 30lb 10oz. 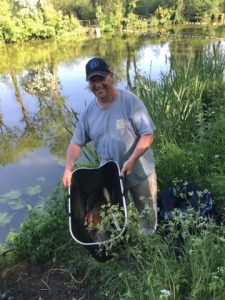 Butch had two carp and some silvers for 9lb 6oz, peg 8 wasn’t in and then Les had 19lb 14oz, peg 10 was also vacant and then we got to Captain Smith who had three nets in and after they were all totted up, his total was 98lb 14oz which was a brilliant weight on the day. The next two pegs also did well with Bish weighing 38lb to go into second place and Bushy had 35lb 4oz for third. Howard had 14lb 8oz and then it was the Tarts turn, his three carp and an eel went 12lb 12oz. Dunner then pulled his net out and he had at least five carp to weigh 24lb 8oz and complete the Tarts battering on both sides (chips for tea tonight then!). I knew I didn’t have that and the only money I’d be taking home tonight would be the Tarts nice shiny pound (4-3 to him now). 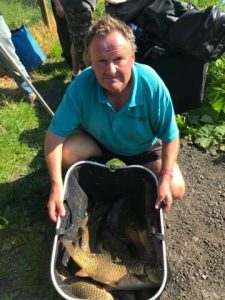 Captain Smith had a lovely day to win with 98lb 14oz 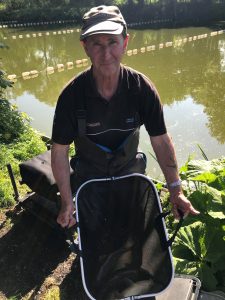 Bish was second with 38lb from peg 12 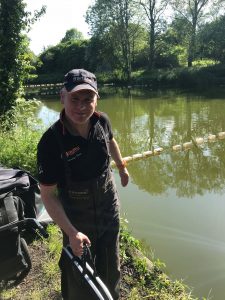 Mike C had 8lb 2oz and then my four carp went 17lb 8oz, Karl on 19 and Rich on 20 both didn’t weigh and the high numbers had been hard going again. 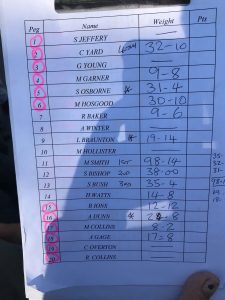 I couldn’t resist texting the Tart to ask if the GOAT was no more, he didn’t reply and as we were fishing Sadborow tomorrow, I started to think that could come back to haunt me!