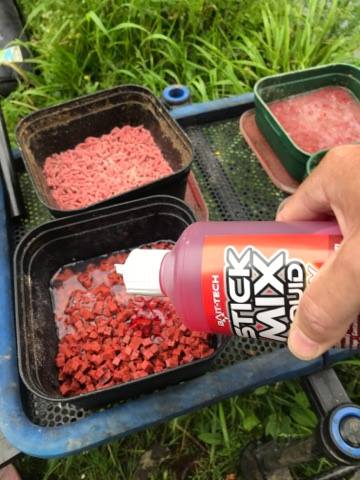 With it being a Bank Holiday, it would be rude not to fish somewhere so a few of us decided to have a knock up at Sadborow. Another decent breakfast at ‘Spoons and then we headed to the pond, there was loads of floating fluff and stuff all over the surface which would be a pain when it came to trying to get a rig through. I was really hoping for one of the open water pegs so I could have a nice days shallow fishing, Les had only put one peg in behind the island and when the Tart drew it, he was not happy despite being back in his usual corner and having three empty pegs next to him! I pulled out peg 8 which is a really good peg and one I’ve not fished for ages. 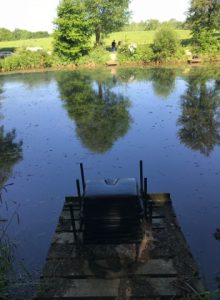 Lots of carp could be seen swimming about under all the crap on the surface and I thought we’d be in for a good day. Yardie was on peg 7 with Les on peg 9 and Butch and Commander Smith across on pegs 1 and 2. I set up an inline dibber to fish 6mm banded pellet at 11 metres, a Drennan 0.4 gram Carp 1 for the top two plus one meat line and a hand made pattern for fishing up the edge to my left if the scum wasn’t too bad. On the side tray I had dead red maggots, 6mm meat to which I added some of the new Bait-Tech Berry Stick Liquid for added attraction and Carp and Coarse 6mm pellets. 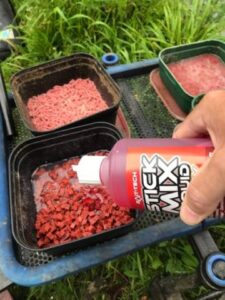 Before the start, most of us set about trying to clear as much of the floating debris with our landing nets as we could, I say most of us, the Tart didn’t need to as his swim was clear (you can probably already get a feel of how this match is going to pan out!). Les got us underway and I cupped in some meat on the short line before shipping out and trying to find a gap to lay the rig in. Superintendent Smith had the first fish and it wasn’t long before I had one and looking around the pond there was elastic out all over the place.

I had a steady first hour catching shallow along with the odd mugged fish, Les was doing well catching carp, skimmers and eels on worm on the deck (fishing properly!), the Tart was getting odd fish but I was in front of him by a couple of fish at this early stage. In the second hour, it slowed up and I was having to chase fish around a bit (much to Les’s disgust) although looking around the pond, most people were doing a bit of stalking!

Yardie was catching carp and had a couple of good skimmers on his short line, my meat line was fizzing but there was so much crap on the top, I couldn’t get the rig in! To make matters worse, Little Jack Horner was now bagging up. There were still loads of carp cruising about but they just weren’t interested. The Tart has painted his top kits ‘Duck Egg Blue’ so the fish won’t be spooked by the pole over their heads and not wanting to be left behind, Smithy has now painted his ‘Luftwaffe Grey!’ although it didn’t seem to be helping him much.

Finally, a little bit of breeze cleared enough space in the floating crap so I could drop in with my meat rig, after a couple of minutes, the float sailed away and of course I missed it! Next chuck I had a small carp, then another and it felt like there were a lot of fish there. Typically as soon as I came off the longer line, it was black with fish! Every now and again fish would cruise by in close and I couldn’t resist having a go by flicking my deep rig in front of them which resulted in a couple of successful muggings.

Every time I glanced up, the Tart seemed to be netting a fish and it looked like the GOAT was back, Yardie was now getting some lumps from his inside line and Les ‘It’s called angling’ was still catching well fishing on the deck with chopped worm and caster. Smithy was still getting odd fish shallow and even Butch was trying a bit of mugging although he insisted he was just trying to shake some fluff off the line!

After landing several fish quite quickly, my short line slowed up although there were still loads of blows, I did manage a 2lb tench that had seen better days but all those fish shallow on the long line proved too tempting and I went back out trying to mug fish that didn’t want to be mugged! Over the next hour, I went from doing really well to struggling and it looked like the battle for second would be between Les and Yardie who was getting some lumps down the edge on paste. He was catching that well, he even threw back his two bream to free up his third keepnet which prompted Smithy to shout across that he might regret that!

With around an hour to go, I had a really good spell catching several fish by skilfully stalking them while it looked like Smithy’s prophecy had jinxed Chris as he never had another fish. When Les called the all out, my clicker was reading 31 fish which I thought would be 60-70lb. The Tart said he’d clicked 85lb so everyone knew he’d have nearer to a ton! Chris was admitting to 60lb but I thought he had more and Les said he might have 75lb, this could all be rather close!

After loading the cars, President Smith got the cakes out and this week he’d done us proud with coconut macaroons (which were lush) and little caramel bites before we started the weigh in with Butch who had 28lb, Smithy was next and had 60lb 14oz before we headed past several empty pegs to get the Tart’s peg, I think he was glad to finally have some company after being all on his own for six hours! 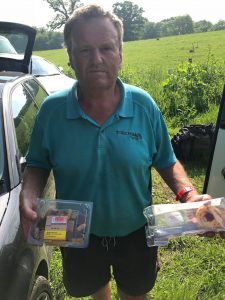 Smithy with some of this weeks cakes (although not before I’d been at the macaroons!) 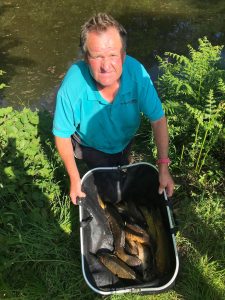 His peg did look nice and you can see from the photo how clear of scum it was compared to the rest of the pond! If you look closely at the image you can also see loads of carp cruising about, knows how to draw that boy! He’d caught his tame 2lb 4oz chub again and then his two nets of carp gave him a 97lb 10oz total so it was closer to our estimate than his! Yardie was next and his two nets went 62lb 10oz and I don’t think he had a fish in the last ninety minutes. 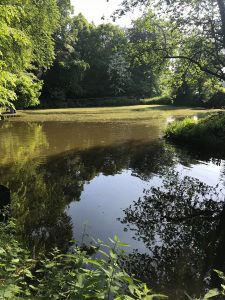 In a corner, three empty pegs, clear of scum and full of carp, I wouldn’t have fancied it either! 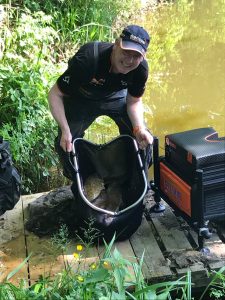 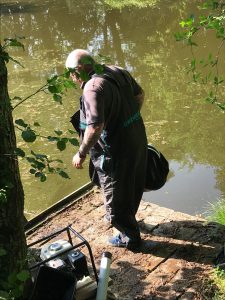 Yardie weighed 62lb 10oz after being jinxed by Smithy!

Then it was my turn and my scrawny tench was 2lb followed by 42lb 12oz and 36lb of carp to give me a total of 80lb 12oz, Les was last to weigh and he had a nice net of silvers weighing 9lb 4oz and his first carp net was 44lb and the other went 39lb 10oz to give him a total of 92lb 14oz and second place. 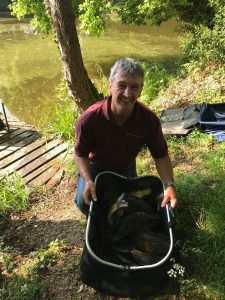 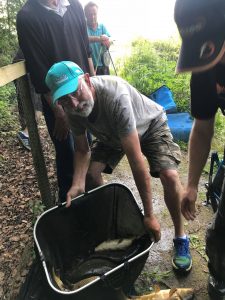 I really enjoy fishing this intimate little pond, the fishing is really good and we always have a right laugh. I wasn’t too far off today, I’ve only lost a couple a fish but not being able to fish the margin on my left due to the scum has possibly cost me.

I felt really sorry for Smithy who would have to listen to the Tart all the way home especially as he was already on about putting the flags on the side of the van and doing a victory tour of Devon!

Next up – Not sure yet

Check Out – Yesterday’s match (below)