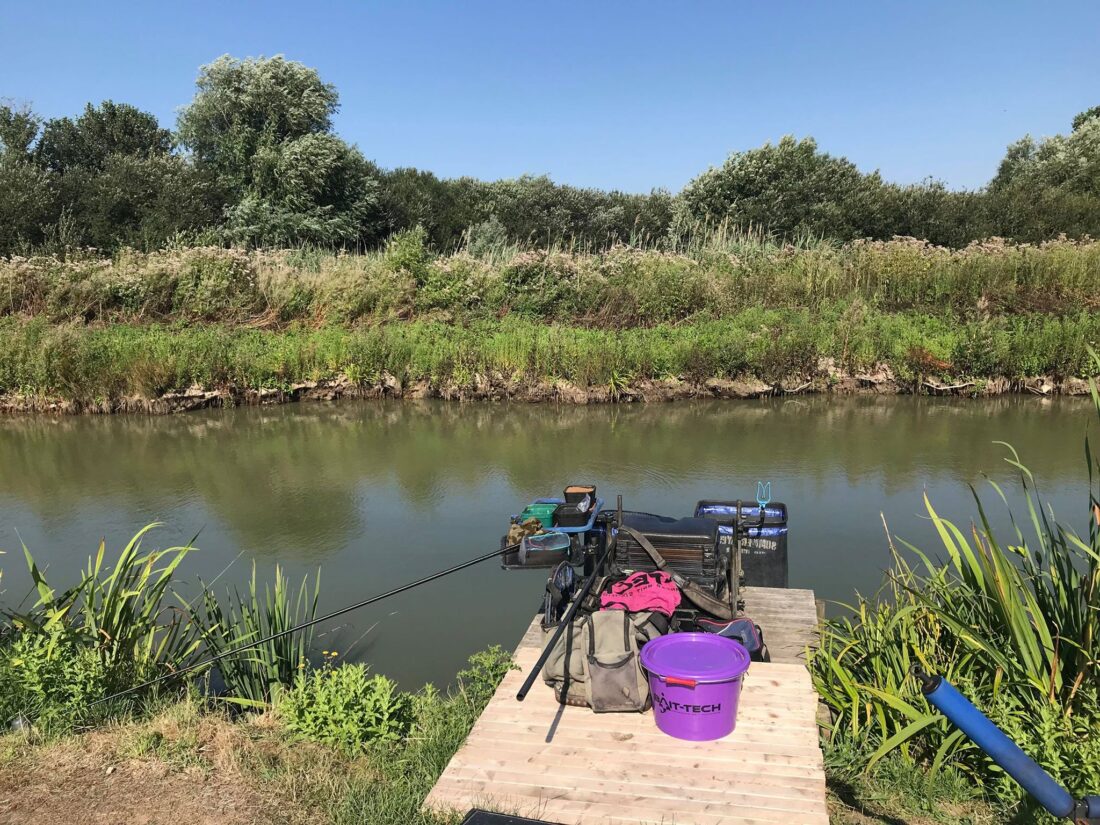 I was back for another go and it was on Sellicks this week, I stopped at the Little Thief for breakfast only to find the door locked and they now don’t open to 8:00, thankfully I only had to wait a few minutes and was soon tucking in and praying it wouldn’t be the best bite of the day! 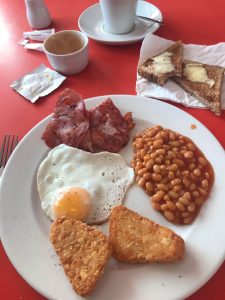 I was hoping breakfast wasn’t going to be the best part of the day!

I arrived at the venue and parked just as Gareth Lennox turned up in a massive white van, he opened the back doors and you could just about make out his fishing kit in the distance, as he went to unload his gear, I took a quick photo. 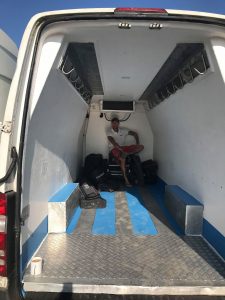 Gareth set off to get his gear and ten minutes later he reached his destination!

There was a good turnout of 14 for this one, which would give most people an empty peg. Along with the regulars, it was nice to see Harry Muir and Alvin Jones who I hadn’t seen for ages and Exeter Mike and Jess ‘Zooner’ Jordon were also fishing today. The golden ball was drawn and today it was end peg 23 which wins more than it’s fair share of matches. Any thoughts of drawing my third golden ball on the trot soon disappeared when Exeter Mike stuck his hand in and pulled it out. I was hoping to avoid the pegs at the top end of the lake and a peg on the far side on the straight would do me, preferably number 17, 19 or 21.

With only three balls left I went for it and ended up with peg 7, not ideal but it was on the nearside straight and I’d done alright off peg 9 a few weeks back. With Glynn and Jeff not fishing, Alvin and Jess were keen to have a silvers side bet even though Alvin would be fishing for carp! 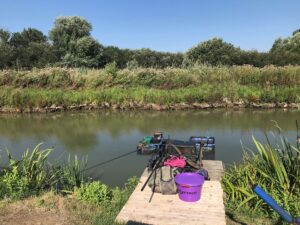 After a poor run of results, I decided I was going to keep it simple this week and set up a 0.3 gram NG Mini Gimp to fish top two to the right and one of Smithy’s wire stemmed floats to fish top two plus one and then two lines down the middle, left and right at 8.5 metres, one with groundbait and one with micros. On my side tray I had Bait-Tech 2mm Carp and Coarse micros that I’d soaked the night before plus 4mm Xpands for the hook with a pot of Special G Gold soft pellets as a change bait and some Bait-Tech ‘The Juice’ and Special G Green groundbait I’d mixed the night before.

For company, Alvin was on peg 9 with Gareth on 11 and on my right was one of Harry’s mates called Titch on 6 with Jim Jenner on 5, Jess on 4 and Wilks on 2. On the whistle I fed a modest amount of micros on the top two line, a ball of groundbait at top two plus one and then cupped in two balls of groundbait on the longer left hand line and micros to the right.

I started on the top two line and it took a little while before I had my first indication which I missed, I then hooked a fish that I was convinced was a small tench and couldn’t believe it when a carp of 8oz popped up! I’d seen Jess net a couple of half decent skimmers already and he’d said before the start that he fancied my peg more than his! I had another carp, this one about 3lb and I was just thinking about swapping lines when I had a 2oz skimbob. Two more followed and then I had a better one of 8oz or so and another blade to give me around a pound of silvers after an hour.

Roger Russell turned up to see how we were doing and said Jess was catching well and had landed three skimmers while he was watching, he left me to it and went to see how the others were getting on. Alvin and Gareth were catching carp well and Alvin had also caught a decent skimmer so both my pounds were in jeopardy already! I went out over the longer lines and when the first bite resulted in a carp, I feared the worst but then I’ve hooked a skimmer only for it to come to the top and the hook pulled out – great! I lost two more skimmers and to make matters worse, every time I looked down towards Jess he was landing one!

Over the next hour and a half, every time the float went under on the two longer lines, a carp was the result and as the halfway point of the match approached, I still only had a pound of silvers in the net! I could see Jess was catching his fish short which prompted me to try my top two plus one line earlier than I would have liked. There was the odd small bubble coming up and I was sure it wasn’t carp but of course the float sailed away and yet another pond pig tore off and I didn’t know what to do next.

I stayed on this line for another half an hour but only added to my carp net, I had another brief look on the top two line and in amongst carp, I added a couple more blades. With two hours to go, I decided to try this slightly heavier rig, which was also a few inches deeper, on the other lines. The two longer lines just resulted in more vermin but back on the top two plus one line, I finally managed my second better skimmer and added a few more blades although there was also a fair bit of cussing as more carp caused havoc. Titch next door was also struggling to catch silvers and Jim on peg 5 was getting quite a few carp as was Jess if the cries of ‘Zooner’ were anything to go by!

Scotty Russell turned up for a look round and while he was with me I had a couple more carp but no silvers so he left me to it and went to watch Alvin who was now catching on his meat line, including a decent skimmer which he took great delight in showing me! With about thirty minutes to go I hooked a fish that didn’t feel like a carp but I’d thought that several times during the day and was waiting for it to wake up but this time it was a lovely crucian around the pound mark.

I also hooked a fish that powered off but then stopped and came slowly to the surface, I started to think it might be a good skimmer but I couldn’t really see because of the sun and as I reached for the landing net, it slapped on the surface and the hook pulled out – bugger! I did manage a couple more small skimbobs and was playing a carp as Pete called the all out. My final tally of 13 silvers (1 crucian, 2 decent skimmers and 10 smaller ones) would give me a couple of pounds for yet another disappointing day, I also had probably 30lb of carp but wouldn’t bother weighing those as I knew Jim, Alvin and Gareth all had much more than that.

Wilks on peg 2 was first to weigh and had 5lb of silvers, then it was Jess’s turn and he had a lovely net of silvers including a 2lb tench for 17lb 7oz. Jim Jenner had 77lb 14oz, Titch didn’t weigh and then my silvers went 3lb 1oz. Alvin weighed 1lb 11oz of silvers so at least I was evens on the side bet front (well for now anyway but more of that later!), he then added 111lb 1oz of carp to give him a total of 112lb 12oz. 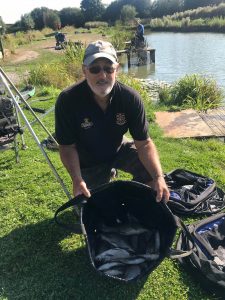 Jess had a lovely days fishing on peg 4 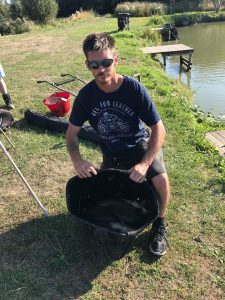 Then Gareth weighed his three nets of carp and his total of 154lb 5oz put him in the lead for now although ‘Paste King’ Roy Hughes was saying he’d clicked 160lb. Roger on peg 13 had 93lb 9oz and Jack Billett next door was just shy of the ton with 98lb 6oz. While we were stood around, Alvin tossed me his pound coin but I didn’t even put it in my pocket as I owed one to Jess. I shouted ‘Here you go mate’ and lobbed it underarm, almost in slow motion I watched it fly through the air, gold and silver glinting in the sunlight, hit Jack’s trolly, arc up in the air before hitting the water with an audible ‘Plop’ and that, in a nutshell, basically sums up my luck in the last few weeks! I paid Jess another nugget so despite finishing evens, I was still a pound down! 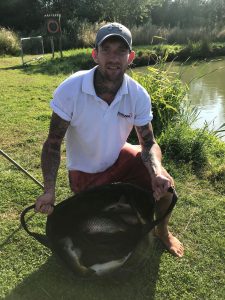 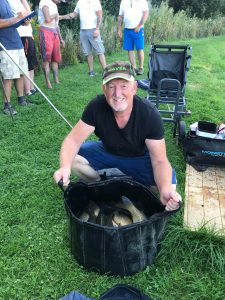 Harry on 15 also just missed out on triple figures with 99lb 6oz and then Roy had 179lb 13oz on the paste from peg 17 and is the man to beat at the moment. John Billett had a nice day fishing the feeder on peg 19 to weigh 120lb 14oz and go into third spot. Mark Leahy had 80lb 6oz on 21 and then Exeter Mike on peg 23 had 118lb 15oz and was one fish short of framing. The pond has fished brilliantly for carp with five weights over 100lb and 118lb not even getting in the money and 93lb only good enough for eighth place! 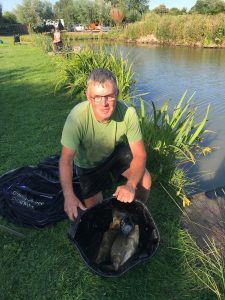 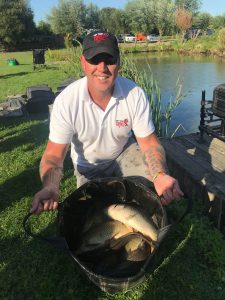 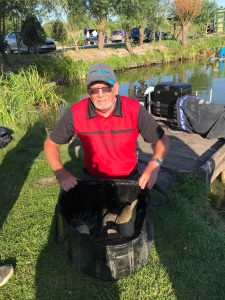 So my bad run continues, will it ever end? Should I start looking on e-bay for a set of golf clubs? For the answers to these questions and many more, including the meaning of life, come back next week!

Check Out – My last disaster at Summerhayes (below)