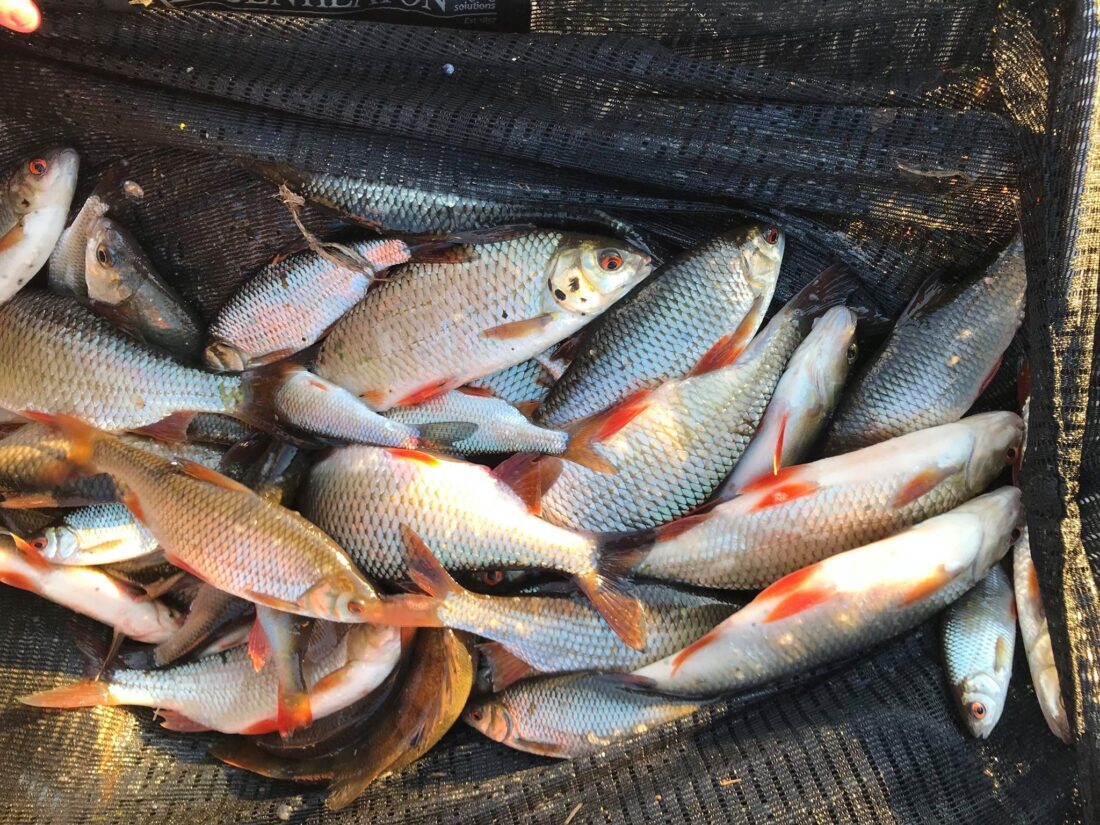 I missed the first one so a decent result would be needed or my league would be over before it started! For this league we’re not allowed to use the same pegs as the V.E.S. so I decided to try Midelney again, obviously we can’t close or peg the water so essentially we’d just turn up and pleasure fish. I’d been down to check it out a couple of times and it looked really good with lots of fish topping so hopefully we’d get a few bites.

We met for breakfast before making our way there, as we pulled up, there was nobody fishing so we quickly decided which swims we were going to use, I fancied the swim by the bridge and with just me, Steve P and Adie left to draw it was still in the bucket, Adie stuck his hand in and of course pulled it out! With two left, I drew for Steve which put him one from the end and he pulled out the remaining ball which put me three up from the bridge, a nice looking swim with a tree opposite. 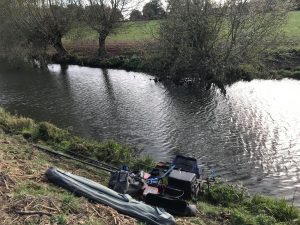 It wasn’t as cold as yesterday but there was still a pretty keen wind blowing down towards the bridge, once we’d got down the bank to set up, it wasn’t quite as bad but would still make presentation a bit of a nightmare as the flow (and there wasn’t much!) was going from right to left with the wind blowing in the opposite direction.

I set up two rigs, a 0.75 gram bodied float to fish the deeper water in the middle of the peg and a 0.6 gram DH16 for fishing across to the far side. I had maggots, casters and Bait-Tech Super Seed hemp on the side tray plus I’d mixed up some of the new Bait-Tech Pro Natural Fine Lake Dark which is just perfect for clear winter venues.

Steve P got us underway with a toot on his whistle and I cupped in three balls of groundbait containing some hemp, maggots and casters just past the middle at 8.5 metres and also fired some casters across before starting with single red maggot to see if I could get a bite. Terry on my right was fishing the stick float and caught from the off and Adie by the bridge was catching small fish on the whip.

The float was barely moving but I started getting indications and had a small roach followed by a couple more so I slipped on double red maggot and the next bite resulted in a slightly better dace. Terry was netting the odd decent roach and doing well but apart from him, Adie and me, I hadn’t seen anybody else catch yet. My next bite saw plenty of yellow hydro exit the pole tip and I netted a lovely roach of 6-8oz, several more followed and I was having to net nearly every one.

After an hour I had 15 fish for 2-3lb and was really enjoying it, Ben got off the mark with a couple of nice chublets and both Terry and Adie were still catching regularly. I did try caster briefly but never had a bite on it and double red was definitely best. There were also a few pike moving about and I was sure it would only be a matter of time before one snaffled a hooked fish. During the second hour I only added 8 or 9 roach but they were all decent fish.

I was still feeding hemp and casters across but the wind would make it a struggle to hold 11.5 metres over there. Steve P walked down and said nobody above Ben had caught yet and it was looking like all the fish were in the early pegs. Going into the third hour, it was starting to slow up a bit for Terry and although I wasn’t getting as many fish, they were cracking roach, I also lost a couple of what felt like good roach or perch as I was shipping back.

Adie landed a jack pike on worm and not long after Ben had a nice roach taken by one but it eventually spat it out looking considerably worse for wear! Terry was getting the odd hybrid and perch and even had a nice ruffe. I was still catching but having to chase them around a bit and I’d get a couple by going to the right of my feed and then going to the left. With about an hour and half to go, the inevitable happened and a pike grabbed a fish and tore off before snapping the hooklength.

I wasn’t getting as many decent roach now but still having to net the odd 4oz perch and had a nice hybrid of 6oz or so. Terry had slowed up but Adie was still catching small fish and had landed some better perch on worm. Steve came down again and said the top four pegs were all still biteless and he was calling it a day, he packed up and Digger followed him shortly after.

Ben had started catching some roach after shallowing up, I was still getting the odd fish by laying the rig in upstream, Dave came up to see how I was doing and right on cue, the float disappeared and I hooked what felt like a nice roach but as I shipped back, everything went slack and I thought it had come off but as I swung the rig in, the hooklength had gone, so maybe another pike strike?

With around half an hour to go, the wind dropped a little bit so I quickly swapped rigs and went over to 11.5 metres where I’d been feeding since the start of the match but the float just sat there, I did have one bite which I missed but it was a bit of an anti-climax. Back on the shorter line and I did manage two more roach, one right on time. I ended up with 55 fish (roach, perch, dace and a hybrid) which I thought might go 8lb, possibly a bit more.

I packed up and took my kit back to the car before going up to weigh Ben in, he’d actually caught quite well near the end and weighed 3lb 2oz which included that poor roach that the pike had spat out, the prognosis didn’t look good and it was unlikely to last the night! Then it was turn and my fish went 11lb 8oz which was a little more than I thought (nothing new there then!). Terry had 5lb 4oz which also included some nice roach and then Adie had 8lb 10oz which included some decent perch and loads of small fish. Thanks to Ben Simmonds for the photo* 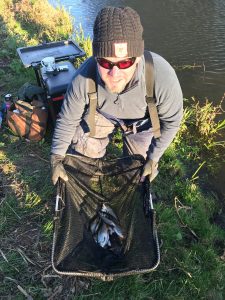 Ben caught well near the end to weigh 3lb 2oz* 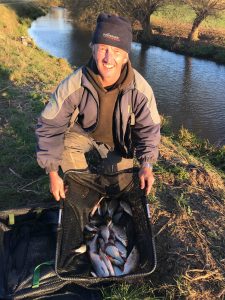 I had 11lb 8oz which included some lovely roach 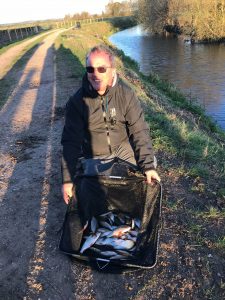 Terry had most of his 5lb 4oz on the stick float 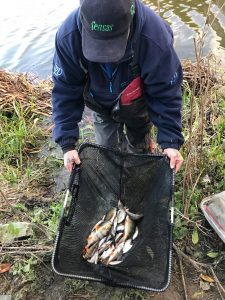 Adie had 8lb 10oz which included some nice perch

So I won and had a nice pick up of £65 and I’d really enjoyed the day, that’s my favourite type of fishing catching quality silvers on the pole. I was a bit gutted for the four that didn’t catch (and fair play to Graham and Dave for sticking it out until the end), all the swims looked really nice but as is often the case, the fish tend to stick fairly closely to bridges or structures. I don’t really know what the answer is, you can’t guarantee people will catch fish every week, even on commercials!