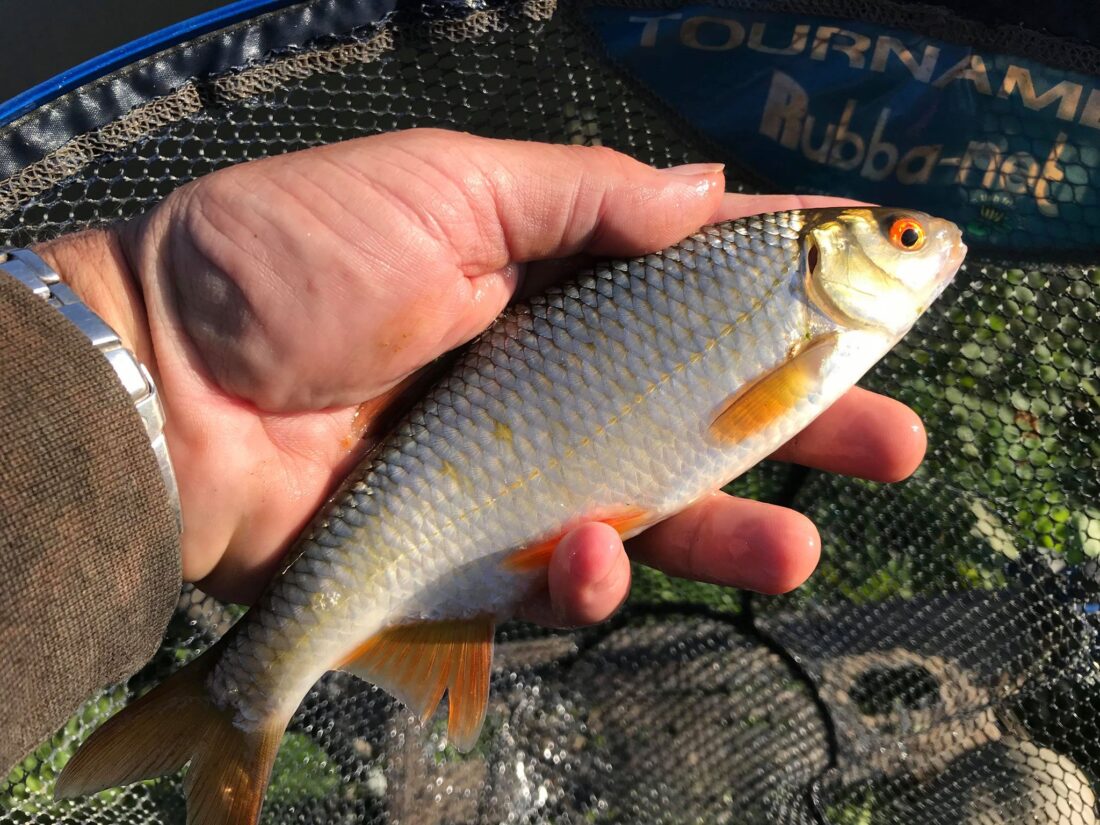 I always look forward to the start of this league, I’ve only ever won it once and would dearly love to win it again. It’s normally a popular league and we had fifteen anglers booked in for the first one including Digger Denslow who used to fish the river years ago, Steve Maynard who travelled up from Cornwall and Ben Simmonds who was fishing his first match for a while.

With the river being so low and clear, we were struggling a bit to find swims, myself, Steve Parker and Rob Cox walked Redbridge, Hambridge and Isle Brewers on the Saturday. We managed to find enough decent looking swims although some of them were a bit of an unknown quantity. The other issue we have at several locations is parking, although there may be several good swims, there might only be parking for a couple of cars, it’s a bit of a nightmare if I’m honest, especially now we’re getting some really good match attendances.

We all met at Ilminster Bowling Club and after an excellent brekkie, pools were paid before it was time to draw, everyone else had drawn their pegs which left two balls in the bucket, Leighton pulled out 124a for me and 123 for Steve P which is the peg he fancied yesterday. Also at Isle Brewers were Rob on 124, Dave on 126, Jake on 127 and Leighton on 128  Elsewhere, Big Frank drew 104 at Redbridge which looked lovely yesterday, Tony was on 106 which holds some good chub and Terry ‘The Toast’ had the choice of 108 or 112 (one of the new pegs). Adie, Fieldy, Ben, Steve M, Hurf and Digger all drew Hambridge where there were loads of small fish topping yesterday.

We got to the river and it was already a glorious day with bright sunshine and blue skies, which coupled with a very low and clear river could make for very tricky fishing conditions. There were still loads of small fish topping and I thought we’d catch a few but I didn’t think it would take a huge weight to frame and 8lb might well be enough. My swim is quite an awkward one to get comfy in as it’s a high, steep bank and a bit of digging in was required. I then received a couple of phone calls, one from Frank wanting to know where his peg was and then another from Hurf asking the same thing.

We hadn’t marked the new pegs yesterday although I had drawn a rough map of Hambridge, I pointed Frank in the right direction and he was a bit disappointed to find it was a swim he’d drawn a couple of years ago and struggled for a few minnows. Hurf didn’t sound too impressed with his either as there were some lilies and it was quite high off the water. I hold my hands up and we should have actually marked the pegs out but with the state of the river at the moment, swims are really hard to find. It needs a good flush through and some frosts to kill the weed off although knowing our weather, we’ll probably get rain of biblical proportions and it’ll be flooded for weeks on end! 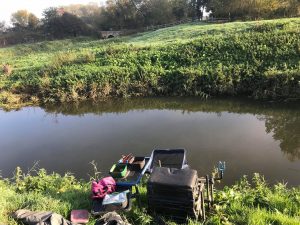 I set up two rigs, a 1 gram bodied float to fish the deeper water in the middle of the peg and a 0.6 gram DH16 for fishing across to the far bank cover, on the side tray I had maggots, casters and Bait-Tech Super Seed hemp. I shouted the all in at 10:15 before starting with the heavier rig down the middle but the float just sat there! I came back in to top two plus two where there was a little bit of flow on the inside, I was feeding casters and hemp here and across where there was a bit of a hole in the cover on the far side (near the right in the above photo).

I started getting a few bites from small roach, dace and gudgeon but it wasn’t fast and furious, I could see Rob was catching quite well above me. By holding the rig back hard, I did have a couple of better roach but even though the swim was 5-6 foot deep, I could see the fish flash as soon as I struck. After an hour, I had around a dozen fish for around a pound or so and was just thinking about trying across when I had another net roach which prompted me to stick with it a bit longer but then I bumped a good roach and that killed it.

I picked up the lighter rig and went across at 10 metres where the flow was coming in on the far side by the stick ups, the float settled and went straight under and I swung in a small dace, it was a bite a chuck, mainly from small fish although every now and again, I’d get a 3-4oz roach. There’s normally a few chub in the peg and I was feeding in the little hole across but wanted to leave it as long as possible before trying it. By the end of the second hour I was up to 32 fish for around 2lb, hopefully a bit more.

The third hour was similar and a chap called Chris turned up, he normally comes for a walk if we’re down there and always says hello, he’s a regular reader of the blog and said he found the ‘Where to Fish’ section on the Isle really useful and had caught some big chub down below peg 129, cheers mate, I’ll try and update it as things have changed a little since I wrote it! While he was with me, I had several fish including a couple of nice roach. 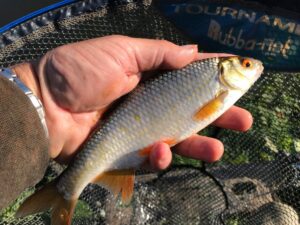 I was getting the odd good roach

After Chris left, I heard some cussing coming from Rob’s direction and he said he’s just lost a big chub, he came down to see how I was doing but my bites were starting to slow up. He went back to his peg and I added another section to try in the hole for the first time, I had a few more small fish but it was a bit of an anti-climax, although I was still hoping a chub or two might put in an appearance at some point.

Frank phoned to say he was struggling, he’d had a pound chub (which he reckoned was lost!) but was being plagued by minnows and he said Tony was in the same boat below him, he did say Terry was catching quite well down on 112.

I had another go on the inside and had two decent roach quite quickly before it died again so I went back across and I had a couple of small fish straight away but then couldn’t get a bite, I started searching the far bank cover down the peg but it was like the whole swim had just died. With about an hour and a half left, I thought it might be a case of swapping between my lines and chasing the fish around the peg. I was back on the inside when Rob came down again, he was getting some pike trouble and said Steve P was having the same problem above him.

I was on around 64 fish for 4-5lb with ninety minutes left but only caught odd fish to end up with 71 roach, dace, chublets and gudgeon plus a few minnows. I packed up and went up to weigh Steve in, he had lots of small fish for 3lb 11oz and then Rob had 6lb 3oz which included a nice chub and I knew I didn’t have that. It was closer than I thought though as my fish went 5lb 9oz and I knew that poor last period was going to cost me. 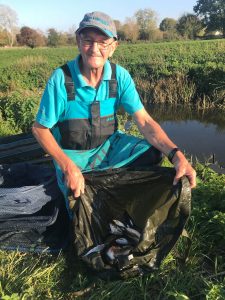 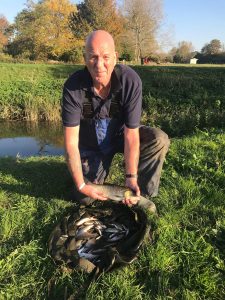 Rob had 6lb 3oz which included a nice chub 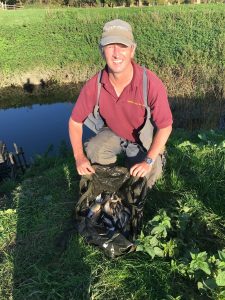 A really enjoyable day, plenty of bites for 5lb 9oz but it died towards the end

Below the bridge, Dave had done really well to weigh 6lb 10oz from peg 126 and I said he’d frame with that. Jake had struggled for 3lb 1oz from 127 and I must admit that peg always looks the business but never produces the goods and Leighton had 5lb 10oz from 128. Frank had packed up early and said Tony had as well although Terry had 5lb 12oz from 112 and had lost a chub so I was fourth in my section which wasn’t the start to the league I’d hoped for. Thanks to Jake Woodard* and Terry Morgan** for the photos. 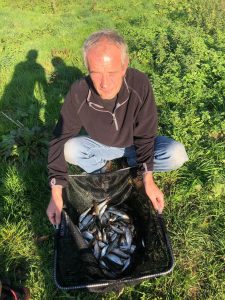 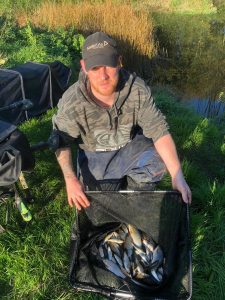 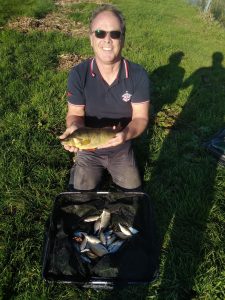 Back at the results and Hambridge had fished really well, Ben Simmonds had a fantastic day to win with 17lb 8oz which included three chub to nearly 4lb, perch and quality roach. Phil ‘Digger’ Denslow was second with 6lb 7oz of mainly roach from H8, Fieldy had loads of small fish for 6lb 2oz from H3, Adie had 5lb 9oz from H1, Steve M weighed 4lb 7oz and Hurf had 2lb 15oz from H7. Thanks to Ben Simmonds*** for the photos. 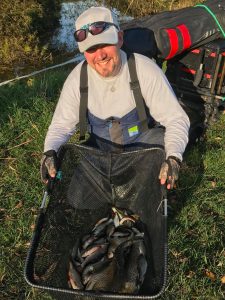 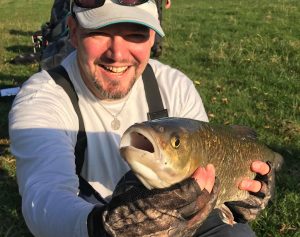 Which included chub to nearly 4lb*** 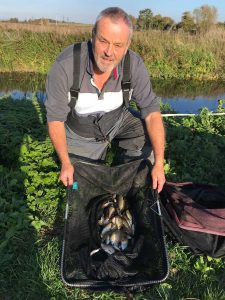 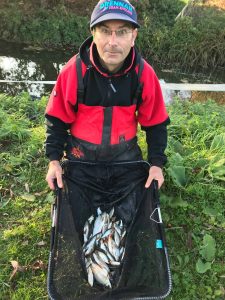 Steve Maynard had loads of fish for 4lb 7oz*** 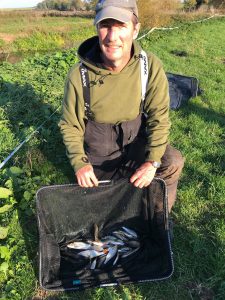 So despite far from ideal conditions, there was a brilliant winning weight followed by a lot of really close weights with just a pound separating second and ninth place, that’s really good fishing. What was also really encouraging was how some of the new pegs fished with 112, H1 and H8 all producing between 5-6lb. Of course it’s not all good news, once again 127 looked really good but it just never produces, the two pegs above Redbridge were a disappointment and I probably wouldn’t use H7 again until after a flush through and some frosts but we do have to try some new pegs. I wish we’d put the peg above 129 in, it looked lovely the day before and after it’s been strimmed or bashed down, 129 is a consistent peg and of course 120 is always a potential match winner.

I have said it before many times, being a match organiser is a thankless task and I must admit I didn’t really want to be as involved as I am but I love fishing the river and I’m passionate about the club and I really don’t want to see the match scene fizzle out, especially when we’re getting good attendances and seeing new faces.

We’re going to try and get down the river next Saturday to cut out some swims and make sure the pegs are obvious, any help would be much appreciated.

Coming soon – My next Random Ramblings