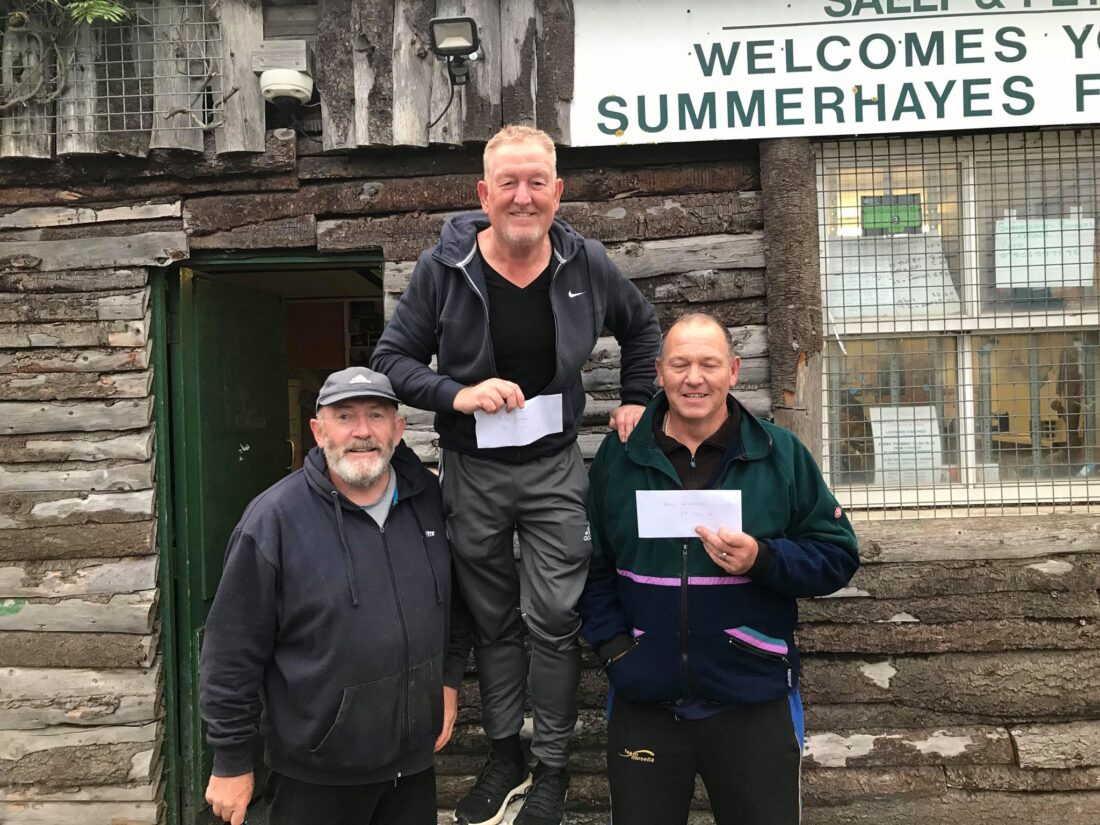 Following on from the success of last years Fridays silvers final, Pete decided to do it for Sundays as well. I think it’s a great idea, every match we’ve paid an extra £2 pools with a pound going in both the carp and silvers pot and with pools on the day as well, there’s a good payout. Originally the forecast had been pretty good for today but as is always the way with the British weather, it was chucking it down as I loaded the car and headed to Taunton to meet Zooner for breakfast in the Toby.

We got to the venue in good time, paid our pools and had a coffee while waiting for everybody to arrive, well over twenty anglers had qualified but several had other commitments and we ended up with fourteen so at least we should have plenty of room. Pete said he would be paying the top three, £200, £150 and £105 and there was also a golden peg which was £150 and number 37 was drawn, a decent silvers area so somebody could be in for a very nice payday!

I went in the bucket quite early and was disappointed when I saw I was on peg 27, Jeff Sparkes had done well from 28 a couple of times recently but I’d struggled on 26 and really didn’t fancy the area at all. Fellow blogger, Lee Williams was on 29 and Rob Birch was on 23 with the cold wind blowing straight down there and he wasn’t looking forward to it either. Glynn had drawn peg 39 and wasn’t happy although he wouldn’t take up my offer to swap pegs! Zooner had the last ball in the bucket which turned out to be 37 and he would be in with a great shout from there, Gabe had peg 35, Bill ‘The Paste King’ was on 33 and Roy Hughes was on 31. Then you had Jeff on peg 4 with loads of room (nine empty pegs in total!) and he would be a danger as always, Eric Fouracres was on 13 with Roger Kimberley on 17 and Roger Russell on 19 although he had the wind straight in his face as well.

The only pegs I didn’t really fancy were mine, Lee’s, Rob’s and peg 9 which Ziggy was on, still with it being cold and lots of people saying 10lb would be a good weight, anything could happen. 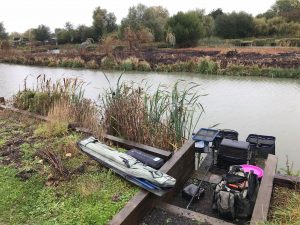 I set up a 0.2 gram NG Mini Gimp to fish top two straight out and five metres plus a 0.3 gram version to fish top two either side where it was a little bit deeper, the side tray contained the usual Bait-Tech 4mm Xpands for the hook, some wetted down micros for feed plus some Juice and Special G Green groundbait I’d mixed the night before. I also had some casters, dead maggots plus some worms I had left from last week.

On the whistle I cupped in a ball of groundbait on the top two line and another at five metres before starting to my right with a 4mm expander and feeding some micros via a toss pot. I had my first bite after around five minutes but a 3lb carp wasn’t the start I’d hoped for, after twenty minutes I still hadn’t put anything in my silvers net so it was time to try the left hand side. It was a similar story there as well, next stop was the top two groundbait line and I missed a good bite but that was it.

It was still lashing it down and with the cold wind it was already making for a very uncomfortable day, Rob and Roger were getting it head on and looked to be struggling. The only other anglers I could see were Eric over on 13 and Roger Kimberley on peg 17 and both looked to be catching quite well. After an hour I went out to the five metre line and missed several good bites before finally connecting with my first skimmer of around 6oz. I had another slightly smaller one and missed a couple more bites and it felt like there were a few fish there.

I hooked another carp so came back in on the shorter line and had my first skimmer from there, I had two more from the five metre line to put me on around 1.5lb after two hours, not great but at least I was getting the odd fish. Then it just died and I went from struggling to really struggling! I swapped between lines, tried different hook baits but all I could catch was carp and not even very many of them!

Thankfully with around two hours to go, it finally stopped raining, which was the highlight of the day so far! Glynn came for a walk and said he was struggling and probably had 3lb, he also said Jeff probably had 8lb and there were a few others around that sort of weight including Eric and Roger K. I carried on going through the motions but any hope of getting a result had long gone unless there was some divine intervention from a higher being!

With around an hour to go, Rog Russell and Rob both called it a day and chucked back 4-5 skimmers apiece, Roger said he was so cold, at one stage his hands were shaking so much he couldn’t put any bait on! It certainly looked like the weather hadn’t done us too may favours as the more sheltered pegs on the other side, were catching quite well.

I was fishing the top two line and with around a minute to go, the float sunk from view and as soon as I struck into the fish I knew it wasn’t a carp and netted a consolation skimmer of around a pound, why couldn’t a few more of shown up earlier? Pete blew for the all out and I packed up before taking some of my kit back to the car, I stopped to ask how people had done and it seemed most people had struggled along the track side.

I was talking to Jess on peg 37 and when he said he’d weighed 7lb 14oz, I realised I’d missed the start of the weigh in! I quickly loaded the car before catching up with the scales which had already reached Roy on peg 31. I had a quick look at the board and Roger K was leading with a brilliant 16lb 4oz with Eric in second with 14lb 6oz and Jeff lying in third place with 9lb 13oz. My fish had weighed a lowly 2lb 9oz and I was 2-0 down in side bets to Jeff and Jess, the only good news was that Glynn had chucked back so even though he had more than me, he registered a DNW, the bad news was that he’d already gone!

Lee had done really well to weigh 9lb 2oz from peg 29 and then Roy had 8lb odd, Bill weighed just over 3lb and Gabe had 5lb 5oz from 35 so it had been tough for most. 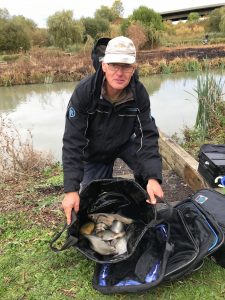 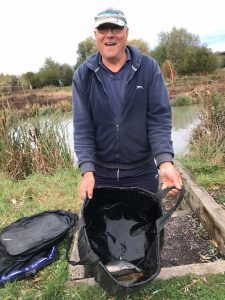 Bill weighed just over 3lb but at least he was still smiling! 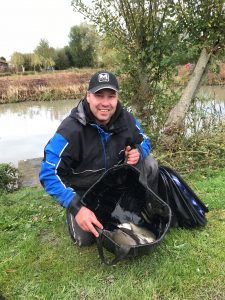 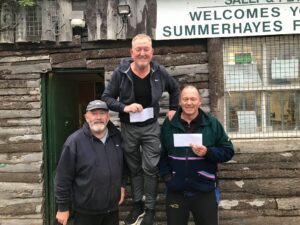 Some really good weights on the day and to be honest I didn’t fish a good match, the top three have all fished maggot or bits of worm and caught lots of smaller fish along with the odd decent skimmer. It’s annoying really because I actually had worm and caster with me and I should have fed a line with some choppie instead of persevering and trying to make my normal approach work, although to be fair, I’m still not sure I’d have done enough to frame as all the weights came from the other side where it was a little more sheltered.

So a disappointing day but I’ll be trying my hardest to qualify for next years final, next up is the first match of the VES Precision league on the Isle, it’s a league I’ve only ever won once and would dearly love to win again so make sure you check back in to see how it goes. We’ve already got thirteen anglers booked in so it’s looking like being a good little series.