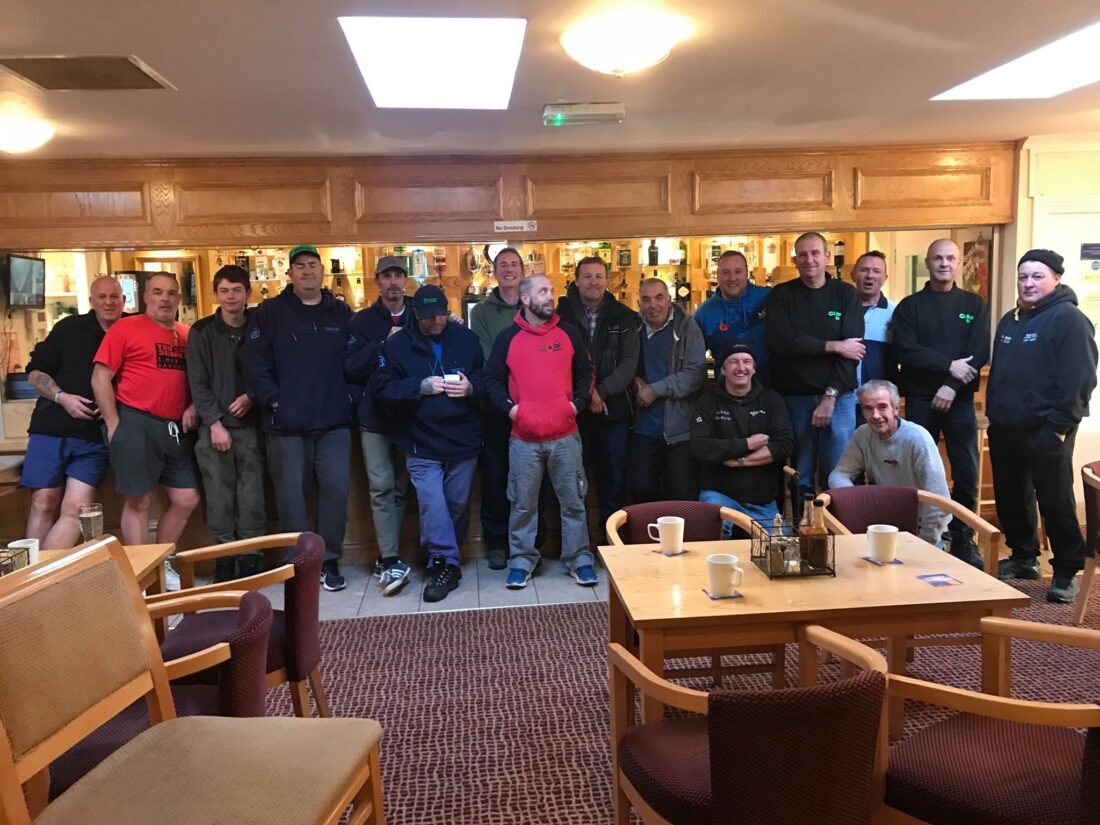 After a really enjoyable match at Stathe, it was our turn to host Taunton for the return leg on the Isle which has been in brilliant form but of course Mother Nature decided to intervene and loads of rain on Friday put paid to that with the river in the fields at Hambridge. I have to say at this point a massive thanks to Rob Cox who went down and permanently pegged the bottom end of the river and also Hurf, Jake and Frank who went down Saturday morning to cut some pegs out but were obviously thwarted by the conditions.

Luckily we have a brilliant back up venue in the shape of Dillington Pond which normally guarantee’s everybody plenty of bites. We all met at the bowling club for breakfast with nine anglers turning out for Taunton and eight for Ilminster. I announced the draw and with two balls left, I got Rob to pull one out for me which put me on peg 18, normally a decent area for roach in the winter and that left peg 1 for Rob which can be good but it’s a bit of an all or nothing peg. 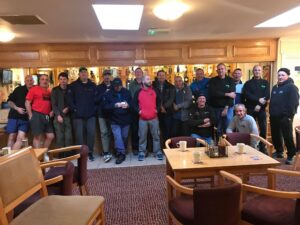 We got out the pond and I was expecting it to be chocolate coloured but it was actually still quite clear which surprised me. My neighbours for the day were Nick Payne on 17 and Tony Cinicola was on my left on peg 19. I set up a little Preston Chianti with spread shot to fish shallow, a 0.5 gram Drennan Roach for 10 metres straight out and a 4 x 16 Preston Chianti to fish two lines at 13 metres, one straight out and another angled to the right. For bait I’d mixed up some Pro Natural Dark the night before plus I had a pint and a half of casters, half a pint of red and bronze maggots, some dead reds, a tin of corn, a pint of hemp plus a few worms. 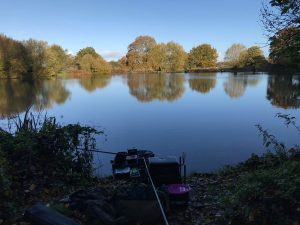 It was a nice day

We had loads of time to set up, so much in fact, that even Frank was ready with five minutes to go! I shouted a rather garbled all in and we were off, I cupped in a single ball of groundbait at 10 metres and then three plus a full pot of casters, corn and hemp on both the 13 metre lines. I started with a single red maggot and it took a while to get my first bite which made me think it might be quite hard, I was getting the odd small roach and perch but it certainly wasn’t fast and furious. I tried double red maggot to see if I could improve the stamp of the fish and had a couple of chunky roach so I put on a caster and had a roach straight away before missing a bite next chuck but that was it.

At 11:00 we held a minutes silence to remember those brave men and women who gave their lives so we can enjoy the freedom we have today.

I had a couple more roach and then the float buried and the strike was met with solid resistance before yellow hydro streamed from the pole tip as a big fish moved off. It eventually stopped and I started to ease the pole back, I unshipped at the top kit and as the fish slowly came up, I could see it was a good chub and after a few more runs, a three pounder slid into the net, a very handy bonus! I shipped back out and after a few minutes, the float sailed away again and another big fish was on, this one was slightly smaller at around 2lb but with over 5lb in the net after an hour, it had been a dream start.

I had a small perch and a Dillington barbel (gudgeon) but then it was like somebody had flicked a switch and I couldn’t get a bite! Looking around the pond, nobody was catching so I had a quick go on the longer lines with corn on the hook but no indications, I wasn’t too worried as very often the skimmers turn up late so I cupped in some more feed and came back in on the ten metre line. I had a perch but that was it and it had died a death.

Over the next couple of hours I tried the longer lines a couple of times with corn, double caster and double maggot but not a sniff, I had a go shallow at ten metres with the same result and I was pinning my hopes on a few skimmers showing in the last hour. Nick and Tony on either side of me had only had a few small perch and it looked like everyone was struggling. I had seen Steve Priddle over peg 5 and Hurf on 9 both land a better fish but that was about it.

Hurf had a couple more net fish which looked like decent chublets and I didn’t think there was much between us. For most of the match there had been some decent fish topping out past pole range and it looked like chublets so I picked up my shallow rig and went out to 13 metres with a single red maggot and started feeding hemp and caster, to my surprise the float shot under and the strike saw loads of Drennan Aqua elastic exit the pole tip, it wasn’t a massive fish but a 12oz chublet was more than welcome. I had another next chuck and then a 2oz rudd and I thought if I could carry on putting odd fish in the net, I wouldn’t be far away.

But once again, I couldn’t get a bite, Hurf had a couple more fish and I felt he was comfortably ahead now, a bank walker came round and said he was catching on worm so I tried it on my long groundbait line but still no bites. Ian Burton two pegs up on my left had a big perch, Karl next to Hurf landed a nice fish, Nick on my right had a skimmer and I’d also seen Simon Garbutt down on peg 16 net a couple of fish so a few more fish were showing but I still couldn’t buy a bite!

I went back out shallow at 13 metres and had a roach but it was a one off, Scotty Jackson turned up to see how we were doing and while he was watching me catch nothing, he said Adie on 13 and Gappy on 14 had both landed skimmers. The fish definitely seemed to be working their way up the opposite bank as Hurf, Karl, Kev Williams and Steve Priddle all hooked big chub. I never had another bite and it had been a struggle on our bank although Tony on my left had a good perch not long before the end of the match. I ended up with 21 fish which I thought might go 7lb.

I packed up and went to watch the weigh in and get some photos, Andy Ankers on 24 had 2lb 10oz, then Chris Parr had 8lb 1oz which included six chublets and I hadn’t seen him catch!, Frank had 9oz on peg 21 and said he hadn’t had a touch on the feeder, Ian Burton weighed 2lb 14oz which included a lovely perch which was over 2lb and Tony on 20 also had a big perch and a few bits for 2lb 6oz. 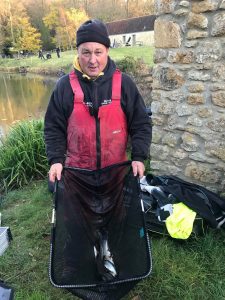 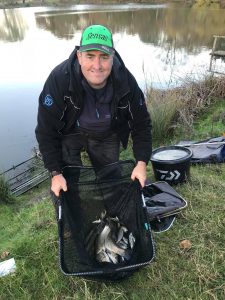 Chris Parr had six chublets and some roach for 8lb 1oz 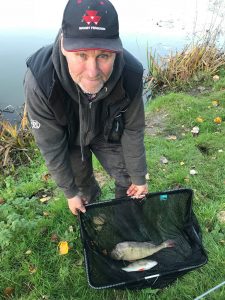 Ian Burton had 2lb 14oz which included a lovely perch 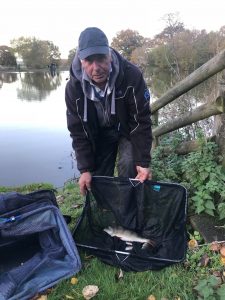 Tony Cinicola also had a sizeable perch in his 2lb 6oz

Then it was my turn and it was closer than I thought but I was just short of Chris’s weight with 7lb 13oz, Nick Payne had 1lb 9oz and then Simon Garbutt on peg 16 weighed 11lb 9oz which included a nice bream, skimmers, chublets and he lost a big chub too. 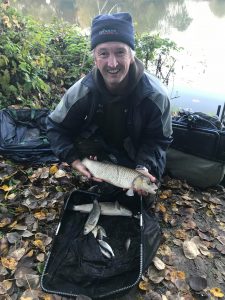 I had 7lb 13oz which included two chub for 5lb in the first hour! 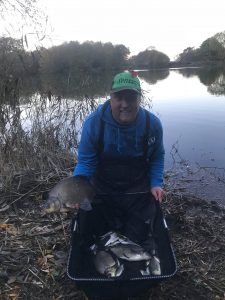 Back at the results and the other section had fished better than ours, Chris ‘Gappy’ Parr had the top weight on the day with 17lb 14oz of skimmers from peg 14, he caught mainly on the feeder but also had a few on the pole, Hurf was second with nice net of chub and a skimmer for 12lb 10oz from peg 9, Adie had 8lb of mainly skimmers from peg 13 and Karl Aplin had three chub and a big roach for 6lb 8oz from peg 8. Thanks to Hurf for the photos*. 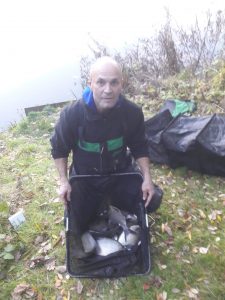 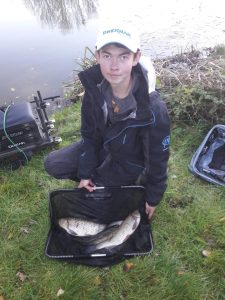 Karl had never caught a chub on the pond until today when he had three! (and a big roach) for 6lb 8oz*

Steve Priddle had 6lb 1oz from peg 5 and had lost a couple of big chub, Dan Baldwin weighed 4lb 7oz from peg 7 and Kev Williams had 4lb 4oz which included a nice chub from peg 6. Then Dave Phillips on peg 2 and Rob Cox on peg 1 struggled for 15oz and 10oz respectively. 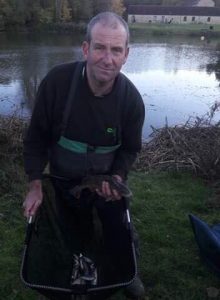 Steve Priddle had 6lb 1oz which included a nice perch* 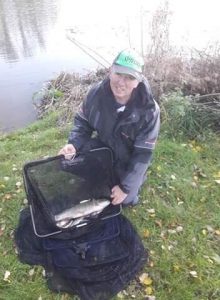 Kev Williams had 4lb 4oz which included a nice chub* 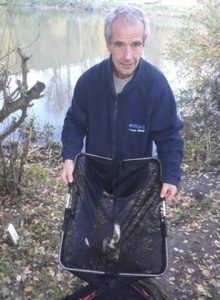 After working out the scores on the doors, Taunton had spanked us on our home water with their top eight anglers weighing 57lb 12oz compared to Ilminster’s 38lb 10oz. It was another really nice days fishing and they’re a great bunch of lads, we’re hoping to do it again later in the year when hopefully we’ll actually be able to get on the rivers, provisional dates are 23rd and 30th Dec.

I was a bit gutted not to have done better after such a brilliant start and I missed out on the section by 4oz, I should have spent longer fishing shallow as I think 10lb was possible but I can’t believe I never had a bite on the deck on the longer lines. It was good to see some nice perch feature in catches and I was surprised at the number of chub caught, I really thought there would be some good roach nets today but they hardly showed at all! It was a bit of a struggle on our bank and four of the top five weights came from the bottom end which had the wind blowing into it.

Before I go I have to pay tribute to the legend John Wilson who passed away in Thailand yesterday, although he divided opinion somewhat, there’s no denying the massive impact he had bringing angling to our TV screens and he made some truly staggering catches for the camera. His enthusiasm and infectious laugh showed just how much he loved simply being on the bank and catching fish. I had the pleasure of meeting him once at an angling show and I asked for his autograph and I’m not ashamed to say I still have it hanging on my wall. 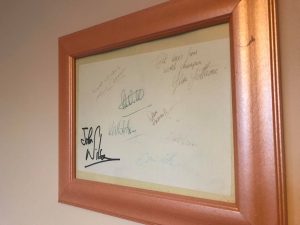 If you like reading the blog, please take a second to vote for me in the UK Blog Awards, just click the link below (you’re only allowed to vote once)

Against men and fish