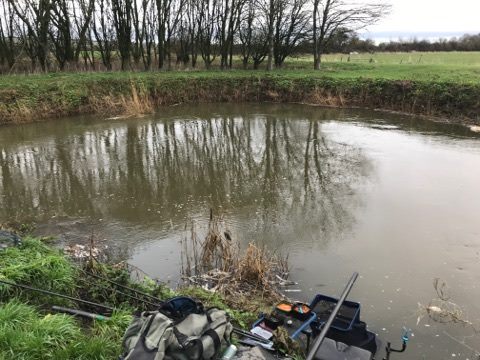 HALLELUJAH!!!! – Despite some heavy rain earlier in the week, it finally relented and I was able to down tools and stop work on my Ark!

I popped down to have a look at the river on Saturday lunchtime and although up and coloured, it looked nice and with no more rain forecast until the early hours, hopefully it would drop further throughout the day. There was a pleasure angler in 128, a chap called Chris who’s a regular reader of the blog and I’ve met him a few times, we had a good natter and he was catching roach, gudgeon and the odd minnow on the stick float. I walked up to Redbridge and it looked okay although a bit pacy before I headed to Hambridge which was higher than I thought it would be but hopefully it would be perfect by the following day.

I kept an eye on the river levels via the EA website and it was dropping slowly but surely although there was some heavy rain coming in Sunday morning. On waking I checked again and the latest reading indicated the river was lower than the last time I’d checked – ideal. I got to the bowling club and most of the anglers were really looking forward to getting back on the river after our enforced break. I decided to just use Isle Brewers and Hambridge and after collecting pools etc, I announced the draw. As per usual, with most anglers already drawn, there were just two balls left in the bucket, I asked Jake to draw for me and he handed me 128 which left him on H3.

To be honest I had mixed feelings, it’s a great peg with a lovely slack but it was the only peg fished the day before although I didn’t think it would affect it too much. We got to the river and it was still quite high which prompted Rob to say it wouldn’t fish very well and I rather rashly said you’d need 20lb to win today and we had a pound on it. Steve P was on 125 above the bridge which I really fancied, Adie was on 124 and Digger was above him on 123. Rob drew Barney’s Bend but didn’t fancy it and Dave P was below me on 129.

I got to my peg and there are two different areas you can fish it from, I had intended to fish it from the same place Chris had but there was water lapping over the little ledge so I opted for the right hand cut out. I set up two bodied floats, both on top fours as it’s a really deep peg, a 1 gram float to fish to hand and a 1.5 gram rig to fish in the middle of the slack where it was a bit deeper. On the side tray I had casters, maggots and Bait-Tech Super Seed Hemp. 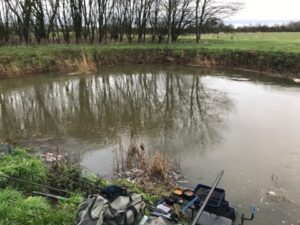 Dave walked up for a chat before the start and I was keeping an eye on the little ledge to my left and rather worryingly, the water was now over the top of it and it was looking like the rainfall earlier was just starting to have an impact. In fact by the time Dave walked back to his peg just before the all in at 10:15, the ledge was several inches underwater and the level was still coming up! It would take a while to reach the guys at Hambridge but with the level already quite high down there, it could make life really difficult for them! Would we be in for a Xmas cracker or a turkey!

I flicked out the lighter rig and fed some casters and hemp to my left but the rig was horizontal so I chucked it up the bank (which was where it stayed for the rest of the match!) and picked up the heavier rig. This was much better and I had a bite straight away before swinging in a small roach which promptly fell off and went back in, a great start! I had a couple more roach but at less than an ounce each, I was soon slipping on a caster to see if could catch a better stamp. I was holding back just off the main flow on my right when a really positive bite resulted in solid resistance on the strike before there was characteristic nodding of a good roach. It swirled on the top and just as I reached for the landing net, the hook pulled out!

I had a couple of slightly better roach along with some gudgeon and a little dace and I really thought I was going to bag up. After an hour I had twenty fish for a pound or so but I was a little concerned that the river was still coming up and had probably risen a foot since the start! During the second hour I was still catching roach and gudgeon but the lack of quality was a bit worrying and unless things improved, I wouldn’t be doing a decent weight today.

I was back on double maggot but things slowed right up in the third hour and I tried adding more sections but only had one fish further out and although the river had finally stopped rising, it felt like the swim was dying a death. I was quite surprised I hadn’t had any phone calls or seen anybody else yet which made me think people must be catching.

Then with about two hours to go, the float sunk from view and this time it was a better roach of around 8oz, next chuck I had another, then a 4oz fish and then a clonker around 12oz, I’d doubled my weight with four fish and thought if I could carry on like this, I could still do a decent weight and maybe even win that bet with Rob! I should have known better and during the remainder of the fourth hour, I only added one more netter and some small fish.

I still had high hopes for the last hour, the river had started dropping again (although painfully slowly) and normally when the light begins to fade, it triggers the better roach into feeding but it was an anti-climax and I only added some more gudgeon. My final tally was 76 fish which I thought might give me 5lb. I packed up before going down to weigh Dave in, he’d had a few nice roach on the feeder for a pound exactly, then it was my turn and my fish went 6lb and I knew that wouldn’t be enough today.

We got up to Rob and he had loads of small fish for 5lb 8oz, Steve P turned up and although he hadn’t weighed in yet, he said he’d caught 86 ‘eyeballs’ for around 5lb but as he was so keen to see how we’d got on, I had my doubts about his ‘eyeballs’ claim! We took our kit back to the cars, just as the scales reached Steve. I had a quick look at the weigh board and Digger had 4lb from 123 and Adie weighed 3lb 12oz from 124, then Steve pulled his net out and there was an awful lot of splashing for a net of ‘eyeballs!’. To be fair he had a lovely net of quality roach for 14lb 10oz, now I know I’m terrible at estimations but to have three times his estimate is criminal! 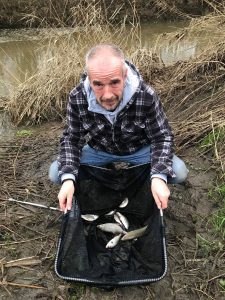 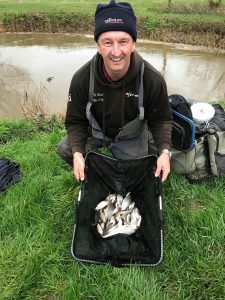 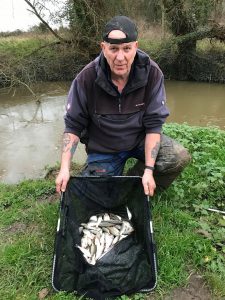 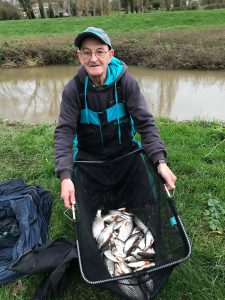 Back at the results and Hambridge hadn’t fished too badly considering the conditions, Hurf had the top weight with 6lb from H5, followed by Steve Maynard who had 5lb 8oz from H9 which included a big chub that had to be 4lb, then Ben weighed 4lb 8oz from H6. Above the bridge, there hadn’t really been any slack water and Baz and Jake had both struggled weighing 3lb 5oz and 1lb 8oz respectively. Thanks to Steve Hurford for the photos* 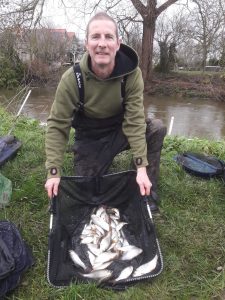 Hurf had 6lb of mainly roach from H5* 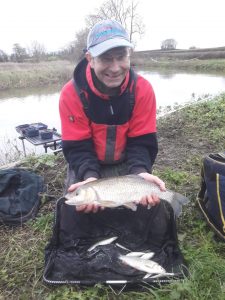 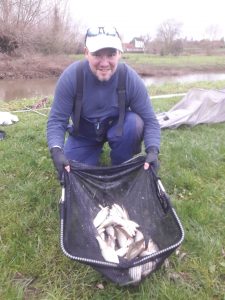 Ben had some nice roach for 4lb 8oz from H6*

So I ended up joint second with Hurf and we picked up £44 each, well done to Steve P for the win (apparently he dreamt about that peg the night before, although in his dream there was a bus parked in the swim!). He also had a pound off me and I lost one to Rob on my winning weight estimate although he gave it straight back as I beat him on the day.

It was a real shame we had that rain as I think without it, the river would have fined down nicely and we’d have seen some big weights.

In the six river matches so far we’ve had five different winners with Digger winning two, in the V.E.S. Precision League, after three rounds and dropping the worst result, it’s starting to take shape and the front runners are,

Also had some more amazing feedback in the week and it’s great to know the blog is read far and wide! ‘thanks for all your efforts to keep us entertained. I look forward to your blog every week. cheers from the Philippines. Baz’

Before I go, I would like to wish everybody who reads the blog a Merry Xmas and Tight Lines if you manage to get out on the bank over the festive period, I’ve got a few more posts lined up before the end of the year so please keep checking back if you’re bored or at a loose end!