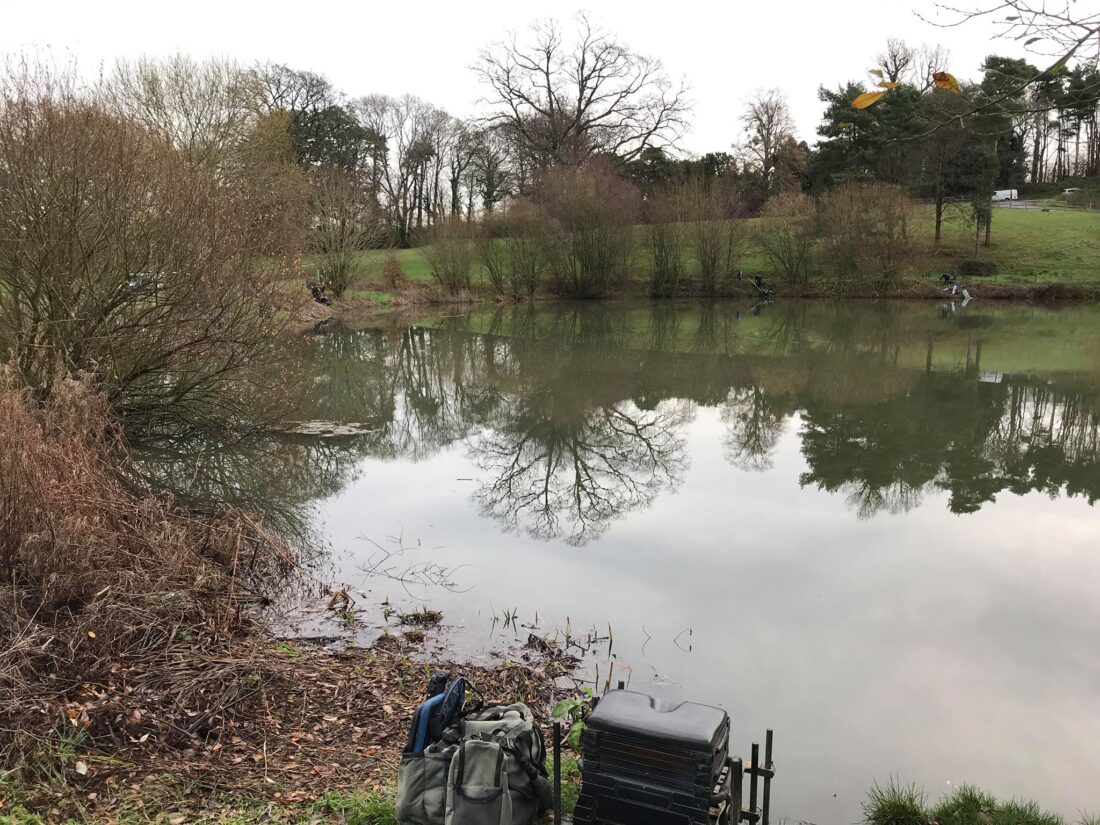 After three weeks of not catching very much, I was really hoping we’d be able to get on the river for once and a nice days fishing would also be very welcome! Of course, after virtually no rain all week, Mother Nature once again conspired against us and it chucked it down on Saturday. I had to pop to Taunton and on my return the rain eased off around 5 ‘o’ clock and with no real rain forecast until Sunday afternoon, I thought there was a good chance we might actually be able to get on the river. I decided to leave it until the morning and have a look then before making the final decision, especially as we are running out of dates to fit the league matches in.

Waking up early Sunday, it didn’t look like we’d had much rain during the night and the temperature wasn’t too bad either. I was that confident we’d get on the river, I hadn’t even mixed my groundbait the night before although I did have some with me, just in case. My buoyant mood and confidence we’d be on the river lasted precisely as long as it took me to drive from Chard to Donyatt! As soon as I went over the river, it was lot higher than I thought it would be and I feared the worst. I stopped at Horlicks and had a look and it was chocolate and hammering through which meant it would just get worse and worse the further downstream you went.

I got to the bowling club and asked Baz what it looked like at Hambridge and he said it was nearly bank high so that was that and we were headed back out the pond yet again. A few didn’t fancy it and I have to say I didn’t blame them after it had been such a struggle in the Xmas Fayre. For the remaining thirteen anglers we had to do the draw out the pond in case there were any pegs taken by pleasure anglers but we had the place to ourselves.

I left out peg 1 and 21 to 24 as they’d been so poor last match, I announced the draw and with just two balls left, I asked Adie to pull one out for me and he handed me peg 4 which has been a decent draw in recent matches and Dave Phillips had the last ball in the bucket which was number 17. The pond was flat calm but there were odd fish topping and with it being so mild, I really thought it might fish quite well (silly boy!). 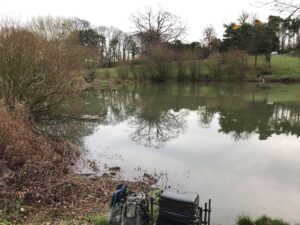 The pond was flat calm when we got there

I mixed up some Pro Nat Fine Lake Dark before setting up three rigs, a 0.5 gram Drennan Roach for 11.5 metres straight out, a 0.4 gram Drennan Pencil to fish by the bush on the left at 13 metres and a little Preston Chianti to fish shallow (not used). On the side tray I had a pint and a half of casters, half a pint of red and bronze maggots, worms and some Bait-Tech Super Seed Hemp.

We kicked off at 10:15 and I cupped in two balls of groundbait at 11.5 metres and some chopped worm and caster by the bush, before starting with a single red maggot straight out, I was expecting to get bites quite quickly but the float just sat there and already it had the feel of being another struggle! On my left, Frank on peg 6, Paul H on 7, Jake (who was looking rather green around the gills again!) on 8 and Baz on 9, all started on the feeder.

I finally had a bite after half an hour and bloody missed it!, I than had a small roach before missing another indication and much like last week, the bites were coming after laying the rig in, if the bait got to the bottom, I wouldn’t get any indications. The next bite resulted in loads of yellow hydro coming out and I shipped back carefully before netting a 12oz chublet – bonus! I’d seen Paul and Baz both catch a small fish on the feeder but looking around the pond, there wasn’t a lot happening.

After an hour and a quarter I had a quick look on the chopped worm line in case there were any more chublets about but no bites in ten minutes, so I cupped in some more choppie before going back over the groundbait line. I then had a really good spell, landing three more chublets and missing a couple of bites in the next hour or so. I’d seen Ben on peg 14 land a couple of decent fish but it looked like most people were really struggling.

Then about three hours in, the wind got up and it started lashing it down with the pegs on my left getting it straight in their chops, Jake wandered up and said he hadn’t caught and was thinking of having an early bath as he was struggling to stay awake although whether that was down to the effects of last night or boredom, I wasn’t sure! While he was with me I missed a really good bite but the weather was now truly horrible and the wind was so bad at times, I couldn’t hold the pole. I could see Adie over on peg 18 catching small fish and Ben netted another decent fish whereas I’d gone from doing really well to struggling.

Then out of the blue, the float sunk from view and the strike met solid resistance, this felt like a better fish and I slowly shipped the pole back, the fish started to head to the left and then snagged me solid! I tried adding sections, taking sections off and changing angles but it wasn’t budging. I had no choice but to grab the elastic and hope for the best, something had to give and eventually the rig came back minus a hooklength and I felt sure that fish was going to cost me.

The weather calmed down a bit although we were still getting the odd shower, by now Frank and Paul were fishing their pole lines and getting the odd small fish although bites for me were still very few and far between. I did manage one slightly better roach of around 4oz but I still felt sure a few more bonus fish would show before the end of the match. I had another go with worm by the bush but still no bites so I tried single red maggot and after a few minutes had a lovely slow bite, I struck only to see a tiny perch fly out the water but at less than half ounce it wouldn’t help my cause much!

Back on the other line and with around half an hour to go and the light starting to fade, all of a sudden the float was going under and it was a bite a chuck, I added a few more small roach and had a couple come off as I was shipping back or swinging them in. As the five hours came to a close, I shouted the all out and I don’t think anybody was too upset! My final tally was only twelve fish (four chublets, seven roach and that tiny perch) which I thought might give me 2.5lb or so. I was pretty sure Ben had won the match and I thought Adie would probably be second but there was a chance I might sneak third place.

I packed up and went to start weighing our section, Leighton didn’t bother on peg 13 although he’d lost a chub which could be costly, Baz had chucked his five roach back and as Jake had already gone, the weigh board was looking a bit sad! Then Paul had 10oz of small fish to go into the lead before Frank pipped him with a level pound, my fish went 3lb 6oz and Fieldy on peg 2 had chucked back a few small fish, it had been desperately hard!

As I took my kit back to the car, the first person I saw from the other section was Steve P, he said he’d chucked back so at least I’d won a pound and Digger only had 8oz from peg 20. He didn’t know what the other weights were but he said Rob had a chub and some roach on peg 16 and Dave on 17 had landed a big skimmer and some bits so all of a sudden I wasn’t so sure I’d done as well as I’d first thought although I would still have some section money to come.

I finished loading my car and when I looked at the other weigh board, as expected, Ben had won the match with 10lb 4oz which was more than I thought he had, along with a good bream and two skimmers, he had three decent chublets. The next best weight was Dave with 3lb 4oz so I actually finished second, Adie had 1lb 10oz of roach and Rob had a chublet and a few bits for a 1lb. I had a nice pick up of £65 and was relieved that the fish I lost hadn’t cost me. Thanks to Ben Simmonds for the photo* 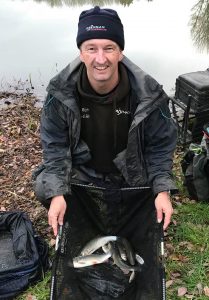 I had four chublets and a few bits for 3lb 6oz 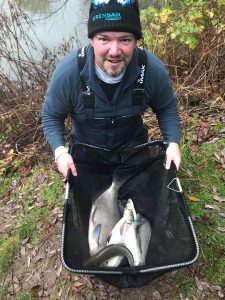 Ben had a bream, two skimmers and three chublets on the feeder for 10lb 4oz from peg 14*

Another real struggle and I just don’t think there’s the head of roach there used to be, a couple of years ago if you put a maggot or pinkie on you’d get bites all day, even at this time of year. Of course you get bad days and I remember winning one week with 1lb 5oz but then the following week I had 15lb of quality roach, that sort of fishing is just not happening anymore. Certainly the 20lb and even 25lb nets of quality roach are no more, 10lb of smaller roach is just about achievable in the summer but it’s a rather worrying trend. The skimmer and bream fishing is still fantastic is you’re on them but I don’t think even they are there in the numbers they were. I really hope I’m wrong and that this is just a blip but I guess we’ll have to wait until next summer now to see how it fishes.

On a more positive note, I’ve had some amazing feedback and comments on here and Facebook so thank you so much for all your support and if you haven’t voted for the blog yet, please take a minute to click the link and press that button! (voting closes on 21st Dec)