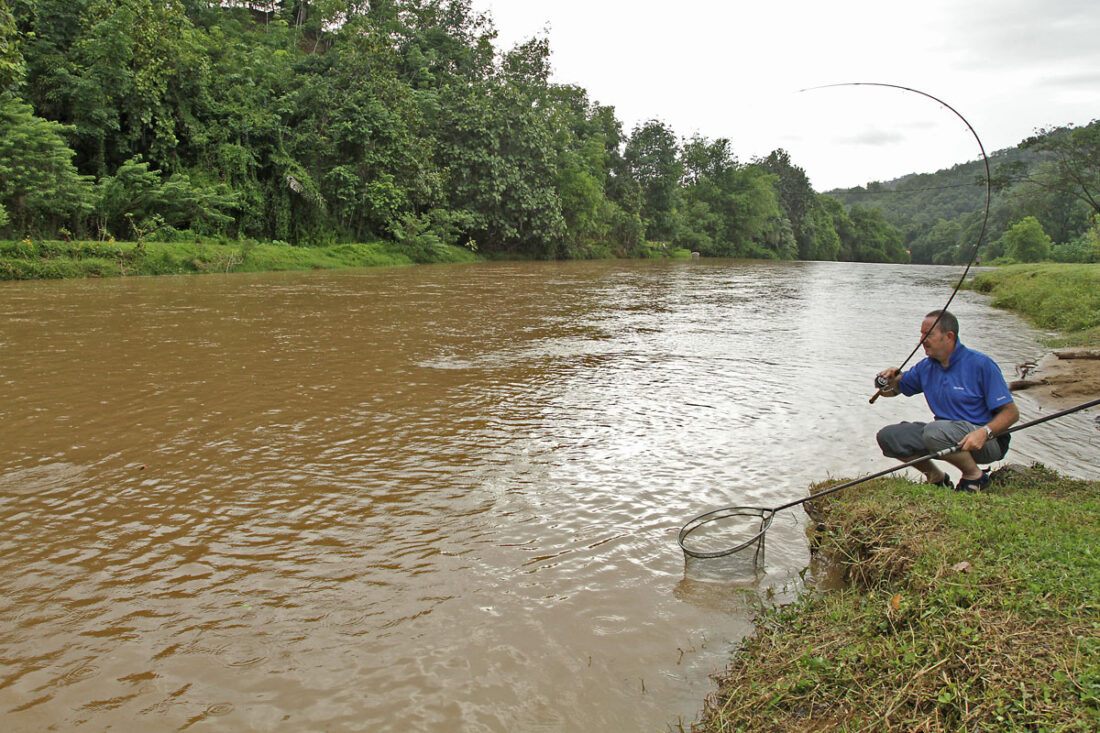 Angling as a Monitoring Tool 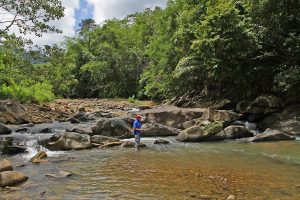 A very wise person once said “to protect something, you first have to know what it is”. For anglers in the UK, there are very few surprises in terms of what species are in rivers and lakes, but in Asia, where mahseer swim in wild waters, the situation is very different.

Since 2008, I have been visiting Malaysia, where there is a wealth of fishing on offer. Similar to Thailand, there is a system of ‘pay ponds’, which are exactly the same as a UK commercial fishery, and these are a perfect introduction to catching some exotic fish.

Get out onto wild rivers and the situation is quite different. One part of the country that has plenty of rivers for fishing is the state of Sabah, in the far north of the island of Borneo, but still a part of Malaysia. My visits there have been in a bid to assess what species of mahseer are in the rivers, and also to work out the most appropriate ways of conserving the fragile habitats in the face of the fast growing palm oil plantations. 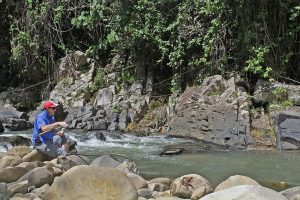 A typical Sabah river, up in the mountains

My first trip to Sabah was in 2014, during which I met some people who have gone on to be important parts of my network. Julio Dino is a fly fishing guide, more on him later; Jephrin Wong was one of the most senior members of the State Fisheries Department until his recent retirement, and was instrumental in building a conservation programme that has increased the amount of coarse fishing available on this tropical island. 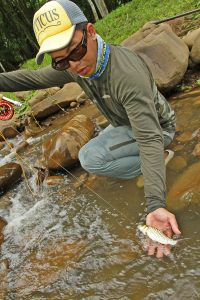 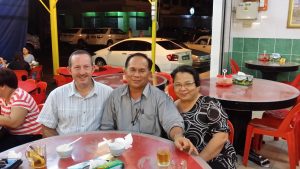 Meeting Jephrin and his wife Marie

A ridge of mountains cuts southwards from the highest point in the whole of Malaysia, Mount Kinabalu. On either side of the Crocker Range are cascades of streams and rivers, most of which hold mahseer and other fish. In many of the more remote villages, and a few that are easy to access, Jephrin pioneered an approach that lets the locals earn money from the river while also giving sanctuary to the fish.

Tagal is the name of the conservation scheme, the name coming from a local word meaning protection. Under this scheme, local villagers are encouraged to set up a three-level monitoring system for how the river is exploited. In a green zone, fish can be caught by anyone, at any time of year; in the orange zone, fish can only be harvested by the locals and only on a set number of days each year; in the red zone, usually to be found very close to the heart of the village, fish cannot be killed, but can be used for recreational advantage, which usually means swimming with the fish, or day ticket catch-and-release angling. 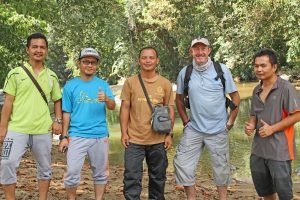 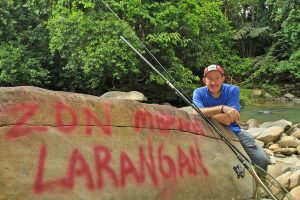 Welcome to the Tagal Red Zone

I have visited five different Tagal villages for fishing, and one for a fish spa. Anyone can drive to a village and buy a ticket for fishing. The difficulty is in finding the villages, which is where a guide like Julio can come in handy. Another potential issue is that the rivers are all spate-driven, in a tropical climate where torrential rains can hit at any time, and often fall every afternoon. Again, a guide who knows the Tagal stretches can call the local organisers and find out if the river is fishable before you travel, or even while on the road. 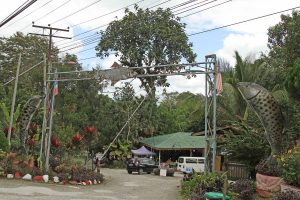 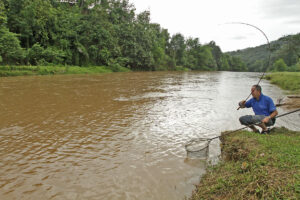 Action on the flooded Babagon River 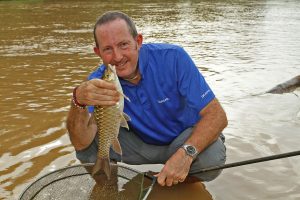 I now have two basic approaches for my fishing all across south and southeast Asia: either using light lures; or bait fishing on simple float or feeder tactics. Given that I prefer to fish short sessions and be mobile, I have long since given up carrying the heavy kit that many would associate with fishing for mahseer. 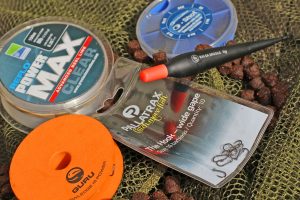 Some of my travel kit

On the rivers of Sabah, small spinners bring plenty of action, but I have also caught well by trotting pellets and bread under a top-and-bottom balsa float.

Typically, the rivers are shallow and fast flowing, very often with thickly tree-lined banks. There are long gravel-bottomed runs interspersed with deeper pools, where depths can be more like 3 – 4 ft, compared with the normal knee-depth found in most places. Wearing a pair of high-tech, fast-drying shorts, plus neoprene trainers, allows you to wade along a stretch and get into perfect position to hit the deeper pools from upstream. Fly anglers, like Julio, prefer to approach the river from downstream, so they are casting from behind the sight-line of the fish.

Light line, small hook tactics are a valuable part of sampling. Bread is available pretty much everywhere, and makes the perfect hookbait, on a size 20, for tiny fish. Very little research has been done on wild fish assemblage, meaning how the populations of the various species are balanced. By catching a range of species and keeping a log and photo record, we can start to build a picture of what a healthy river looks like. Of course, my main focus is on mahseer, but there are many other fish that are fun to target, and using the two methods outlined allows me to get to see most of them. 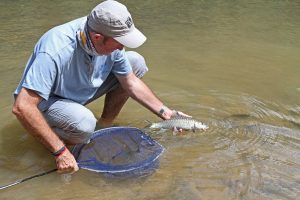 Releasing a small mahseer after sampling 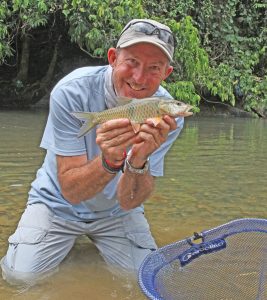 Not all about mahseer, this is a jungle perch or Hampala barb 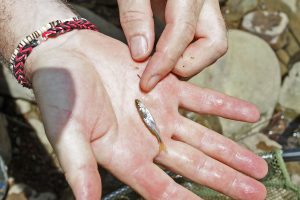 Sampling involves many species and many sizes of fish

Field work on catching and sampling mahseer has been in progress for decades, but much of it is having to be redone. In many cases, scientists have recorded captures of fish, but without taking identification photographs. Other projects have collected genetic samples, but again, without reference photos. Another key aspect of all scientific work is to cross-reference with the original specimens from which a species is named, called the holotype, or extra specimens from the same locality, called paratypes. The original venue from where the holotype was taken is called the type locality. Much of the work done over the last 50 years has ignored referencing to the type locality or the holotype. 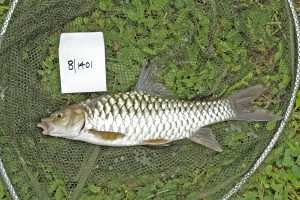 To allow a better understanding of what species there are, and where they are distributed, we have been collecting photos, taxonomic measurements and genetic samples from all of the rivers where we have worked over the last five years. Unfortunately, we are still several years away from being confident about several of the species, including the main mahseer in Sabah. Before we can claim this fish as a valid species, we need to cross reference with a fish from Bogor, on the Indonesian island of Java, the type locality of Tor douronensis.

Many scientists claim the Sabah mahseer is T. douronensis, but the current, correct status is that it cannot be claimed as a species distinct from the red mahseer of Java, Tor tambra. My personal feeling is that the Sabah mahseer is a distinct species, but I cannot yet prove whether or not they are T. douronensis. The red mahseer has a torpedo-shaped body, and the head is usually at least as long as the maximum depth of the body. The Sabah mahseer is a deeper-bodied fish, with a short head, typically. Careful measurements of these lengths over tens of different fish will be required before we can lay down a final set of criteria for each species.

The Sabah State Forest Department is now running a programme to encourage set-aside of riparian habitat within palm oil plantations. If the scheme is successful, local farmers will get cash payments in return for allowing corridors of natural forest to return alongside all rivers and streams. Link this with more visitors going onto Tagal rivers to fish, which means locals in areas where there are no plantations get to see a tangible reward from keeping the rivers pristine, and the future could well be very bright. Not only will the mahseer thrive, but other fish species as well as the whole gamut of freshwater biodiversity should be better placed to survive.

Mahseer are members of the cyprinid family and capable of growing to at least 110lbs, possibly to more than 150lbs. They are omnivorous, most closely resembling chub in their feeding habits.

There are four, closely related genera in the wider mahseer group. Of these, Tor are what we are trying to call ‘true’ mahseers, Neolissochilus are another fantastic sporting fish, widespread in similar areas to Tor, and we are trying to call these ‘lesser’ mahseer. The last two genera are less widely spread, called Parator and Naziritor. 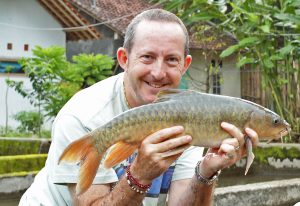 Author with a Tor tambra from a fish farm in Java

If any readers are interested in a trip to fish for mahseer, or helping with a fieldwork study, drop me an email to: steve@mahseertrust.org or contact me through social media. I have contacts offering fishing in most of the range countries, but especially in India, Indonesia, Malaysia, Thailand and Sri Lanka.

Julio can be contacted by email to: claypot182@hotmail.com

Among the important projects we need to undertake are:

a full field study to find mahseer in the River Mahanadi near Darjeeling in north India. This is the type location for the species called Tor tor, the species from which all mahseer were declared as a unique genus. Unfortunately, Tor tor has never been adequately identified or genetically sampled, so it seems there are currently at least two unique species in India claiming the name.

Likewise, Tor mosal, another species from north India with insufficient data or identification, has to be found in its type locality, and samples taken and assessed.

You may ask; what has any of this to do with me? In answer; many of the projects we build, the networks we create and the ways of working that we follow, can be and have been used as templates for river and fish conservation programmes all over the world. By helping us in our work in mahseer range countries, not only do you help those local fish, river and the people who rely upon them, you also help the global conservation community to become more effective.

Please support us by sharing our social media output, helping with awareness of our projects and information sources, and best of all, by becoming a supporter or donor so we can continue with our field work.