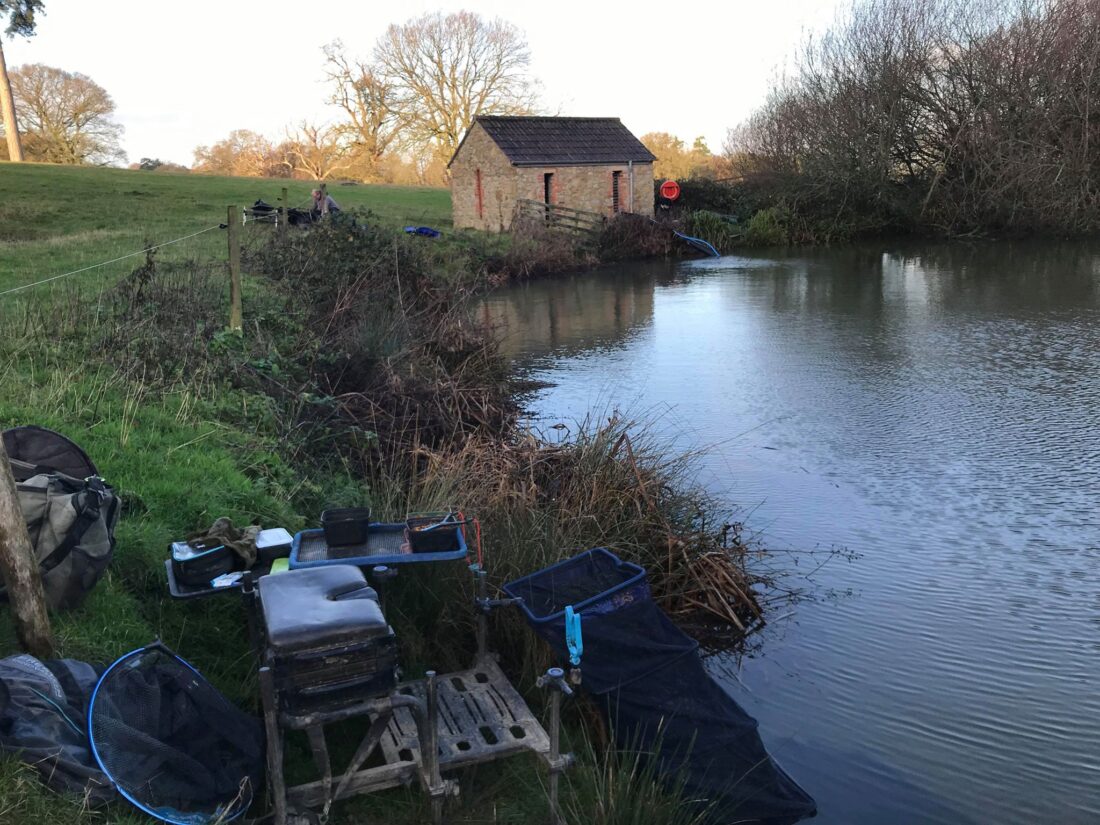 The Xmas Fayre match is always well attended with several anglers fishing their only competition of the year and I have to say it’s a bit of nightmare to organise with getting everybody to pay their entry fees and trying to sort food and prizes. I must admit I was starting to find it quite stressful, especially when my dad was taken into hospital and I was running round like a headless chicken, so a massive thanks to Rob Cox who said he’d get the prizes which took a big weight off my shoulders. I popped over to the Bowling Club in the week to pay for the food and Drew very kindly said he’d put up a meal voucher as a prize, cheers mate, you’re a star!

We had loads of rain in the week and I was sure we’d end up on the pond but as we neared the weekend it eased off so I had my fingers crossed we might be able to get on the river. I popped down to have a look on Saturday lunchtime and at Isle Brewers it was a raging brown torrent and at Hambridge it was bank high so the decision was made to move it to the pond.

Waking up Sunday morning it was still wet and windy and as I drove over to Ilminster there was lots of standing water about so I think it was the right choice. When I arrived, Rob was unloading the prizes so we gave him a hand before ordering a breakfast to set us up for the day. I said hello to the anglers already there and started taking money for the superpool. We did have twenty booked in but two pulled out on the morning which was a shame. It was great to see Andy Welch, Stuart ‘Fred’ Brown and Justin Charles who I hadn’t seen for ages. Justin used to fish a lot of matches but moved on to fishing for barbel on the River Wye and now spends a lot of time fishing for salmon, I was slightly disappointed he didn’t turn up dressed in tweed with a ghillie in tow!

I announced the draw and as I was holding the bucket of dreams (or doom!), I had the last one, I got someone to pull out the last ball and despite praying for 13 or 14, I ended up on 22 which isn’t great and I didn’t fancy it at all. After a short drive I got out the pond and for company I had Justin on my left and Fred on 21 on my right. John D had 24 by the bush and Steve P was on 1 on the other side although those pegs haven’t done anything for ages. Given how much rain we’d had, I couldn’t believe how clear the pond was and it never seems to colour up these days. 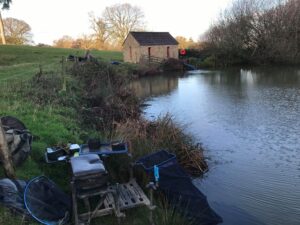 Peg 22 looking up towards the pumphouse

I set up three rigs, a 0.5 gram Drennan Roach for 10 metres (and that was optimistic with the wind!), a 4 x 16 Preston Chianti and another little Preston Chianti to fish shallow. For bait I’d mixed up some Pro Natural Dark the night before plus I had a pint and a half of casters, half a pint of red maggots, worm and some Bait-Tech Super Seed Hemp.

I shouted the all in at 10:00 before carefully cupping in two balls of groundbait at 10 metres, either side of me, the Cannonball Brothers BADOOSHED in a salvo of babies heads! I quickly put a plummet on to make sure the depth hadn’t changed before shipping out with a single red maggot on the hook. It took a while to get my first bite which of course I missed, the next indication came around the twenty minute mark and I had a tiny roach to get off the mark, this was going to be hard!

I started getting a few small roach and after an hour I had a dozen fish for around 8oz, I’d seen Fieldy catch a few roach over on peg 2 but I didn’t think Steve P on peg 1, John D on 24, Justin, Fred or Andy Welch on 20 had caught yet. Going into hour two, I was still getting the odd roach and would get a couple before having to wait ages for a bite again, I also had a couple of waspy perch which isn’t a great sign.

Fred opened his account with a small roach although Justin was still blanking which I think was down to him using a Hairy Dog Knobbler instead of proper bait! Most of my bites were coming on the drop or as the rig settled so I had a quick go with the shallow rig but never had a bite on it. John D had a couple of small roach, Steve avoided the blank with a little fish and Justin finally relented, put a maggot on and caught a few bits.

With it fishing so hard, it was always likely that a couple of bonus fish would win it and with a couple of hours to go, I saw Hurf into a decent fish over on peg 7, he lost it but then not long after he hooked another and safely landed that one. When Tony Newman on peg 14 landed a nice chub, it was pointless me carrying on catching a few bits so I chopped up some worm and caster and potted it in at 10 metres before going over it with my other deeper rig, which had a slightly beefier hooklength. I gave it nearly an hour but with no indications, I swapped back to the lighter rig for the last 45 mins and added a couple more roach to finish on 33 fish, a real struggle.

I packed up and went to help Terry with the scales and grab a few photos, John D had 10oz on peg 24 and those bush pegs haven’t fished at all this year, Justin weighed 12oz and didn’t fancy having his photo taken, I had 1lb 12oz and then Fred weighed 11oz. Andy had one roach for 2oz and then Terry on 19 just pipped me with 1lb 14oz, he also lost a big bream which would be costly. 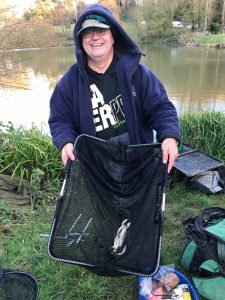 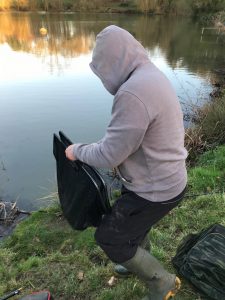 Justin didn’t want a photo with his catch, I think he was just upset his ghillie wasn’t there to put the fish back for him! 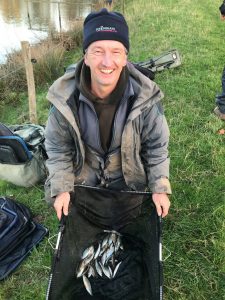 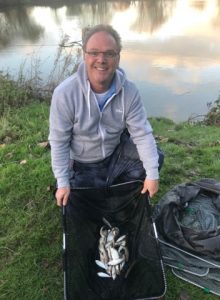 Terry had lots of small fish for 1lb 14oz

Rob had two skimmers and a decent chublet for 3lb 10oz from peg 18 but had also lost a big fish, Ben Simmonds on 17 had a chublet plus bits for 2lb and then Digger had a good skimmer and two chublets for 3lb 15oz from peg 16. 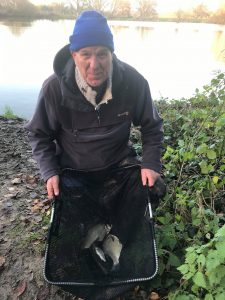 Rob had two skimmers and a chublet from peg 18 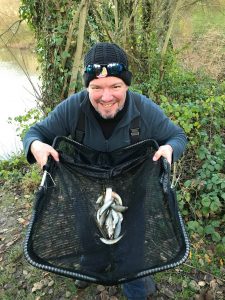 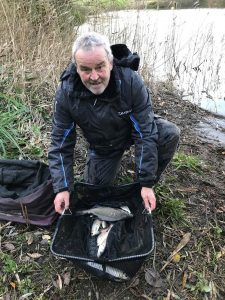 The other section had fished a bit better with Jake winning the match (for the second year running) with four skimmers for 5lb 9oz from peg 4, always there or thereabouts is Jake, God knows how good he’d be if he ever turned up without a hangover! Baz was second with a big perch, a skimmer and some small fish for 4lb 12oz from peg 13. Hurf had a big perch and a chublet for 2lb 10oz from peg 7 and he’d lost two big fish which would have won it. Thanks to Steve Hurford for the photos* 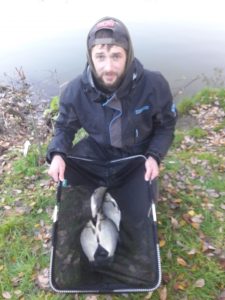 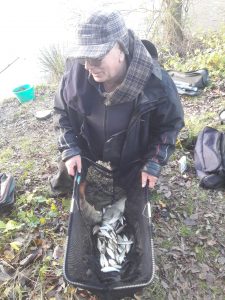 Baz had a nice perch, a skimmer and some small fish for 4lb 12oz and second spot* 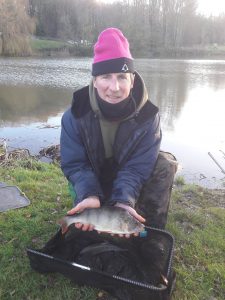 Hurf had 2lb 10oz which included this lovely perch*

Tony Newman had a nice chub and some bits for 2lb 8oz from peg 14 and he lost one as well, Rich Studley had two skimmers for 2lb, Fieldy had 1lb 3oz from peg 2, Steve P and Dave both had 4oz and Adie had a single roach for 1oz from peg 9. 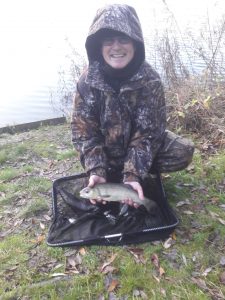 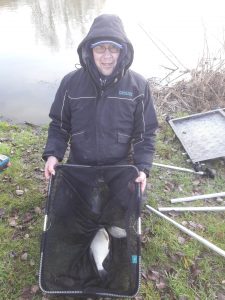 Rich S had two skimmers for 2lb from peg 6*

Then it was back to the bowling club and Drew laid on a great spread for us all before the prize giving. Along with the voucher from Drew, Hurf gave me a voucher from the club for an Ilminster licence and John Dursley from Enterprise Angling very kindly donated some tackle vouchers, Max at Ilminster Warehouse gave us four bottles of wine and Sara’s Dairy supplied the cheese, thank you all so much for your support.

The top three all received a voucher and some pools money before having their pick of the prizes, I ended up in tenth place and chose four boxes of chocolate biscuits and shortbread.

I must admit I didn’t enjoy the fishing side of it today, the pond fished really hard and a combination of strong winds, cold water going in, gin clear water and 18 anglers around it probably didn’t help but the roach fishing in nowhere near what is was and I do wonder if some of it is down to predators. That’s three bad matches for me on the trot, lets hope we can get on the river next week and have a decent days fishing.

Still time to vote for the blog, hit that vote button and lets get Against Men and Fish shortlisted!