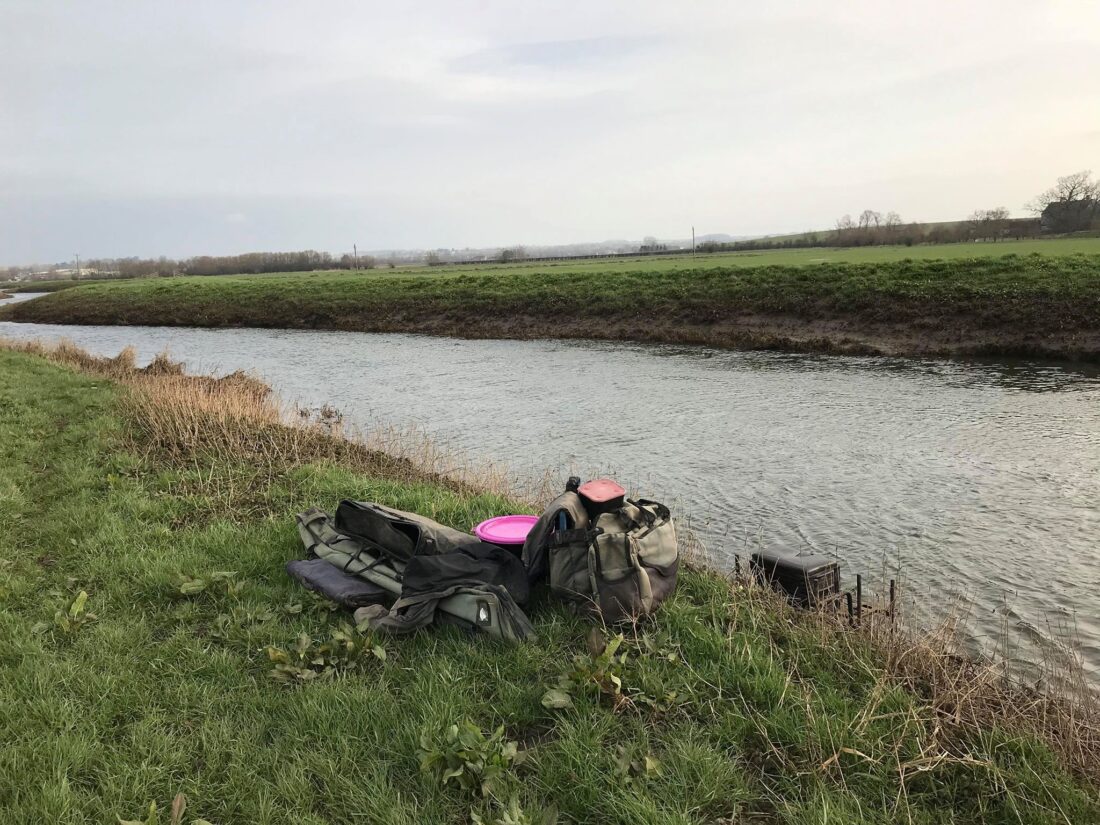 For the final Warehouse League match we decided to head to Midelney and Muchelney again with a section at each. After breakfast we headed to the river and there were no pleasure anglers so we decided to have three on the Isle and four on the Parrett. As far as the league was concerned, I went into this match with a one point advantage over Fieldy and if I could finish first or second in my section I would win the league as I had a big weight advantage. Also I rejigged the payout to try and make it fairer in case one venue fished better than the other so would pay the overall top weight and the two section winners and then pay the top two in the super pool.

Dave P was going to be a little late so I announced the draw and with two balls left, I asked Fieldy to draw for Dave and he pulled out peg 1 which was the first swim below the bridge at Midelney and that left me with peg number 7 which was two below the bridge at Muchelney. So I’d managed to avoid three bridge pegs and was in the larger section of the two so it was advantage Fieldy, especially as Dave wasn’t turning up until later and would give them a head start!

We got to Muchelney and it looked nice although the level was down a bit, Baz and Terry were above the bridge where me and Steve P were last time and Adie and me were the two pegs below which were a bit of an unknown quantity although Baz had been for a quick little recce in the week and said he’d caught fish in every swim he’d tried! The wind was quite fierce and howling downstream and as we took our kit to the pegs, I didn’t see a fish top and I hoped it wasn’t a bad omen! Also with Adie and Terry in the same section, it would be a straight shoot out for third place. 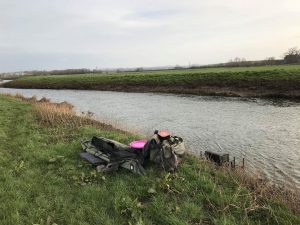 The wind was howling downstream

I set up two rigs, a 1.5 gram DH13 bodied float to fish four sections to hand and a 1 gram bodied float to fish the middle at about 10 metres but I felt that would be a struggle with the strong wind. On the menu for today were casters, maggots and Bait-Tech Super Seed Hemp plus I was trying the new Pro Natural Bream Dark for the first time and had mixed some up 50:50 with regular Pro Natural, the night before. 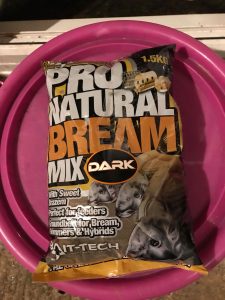 Is there a nicer smell than Brazem?

On the whistle I threw in three balls containing maggots, casters and hemp on the short line and cupped in one at 10 metres before starting at four sections to hand with double red maggot on the hook. Adie had started on the whip and was into small roach straight away, I let my rig run through and then held back and the float dipped before sliding away and a small half ounce roach not only got me off the mark but ensured I couldn’t finish any lower than second in the league.

More roach followed along with the odd little silver bream/skimmer/hybrid thingy and it was a bite a chuck, Adie was catching and I could see Baz on the other side of the bridge netting fish but I couldn’t really see how Terry was doing. I thought Adie was a couple of fish ahead of me but then I had a 6oz chublet and we were neck and neck. We were catching well but lots of small fish so I kept trying caster to see if it would improve the stamp, I did get one good roach of around 8oz but was still getting lots of smaller ones about an ounce apiece.

After an hour I had 40 fish for around 2.5lb and there wasn’t much between me and Adie although judging by how many times I’d seen Baz use his landing net, I thought we were already well behind him. The second hour was similar but sport tailed off a little and I added another 30 fish with the odd netter amongst them. I was loose feeding casters and hemp and started throwing in the odd nugget of groundbait as well, my catch rate pretty much stayed the same in hour three and I was up to 103 fish with two and a half hours to go.

A chap turned up who regularly reads the blog and said he’d just been to Midelney and they were catching there with the chap by the tree (Digger) probably doing the best. This was good news for me because as things stood, I knew I was behind Baz and it was nip and tuck with Adie although I still didn’t really know how Terry was doing but the last time we’d fished here, that peg had done okay but not as well as the one by the bridge. Third in the section would be alright for me as long as Fieldy didn’t win the other section.

I was still catching but was having to chase the fish around a bit by flicking the rig upstream or past the feed, sometimes holding back hard over the feed but the fish just wouldn’t settle, I’d get two or three fish and then it would go quiet for 5-10 minutes and Adie would have a decent spell, this was going to be too close to call! I was persevering with caster but just not really getting any quality, I tried double maggot every now and again but the fish were tiny.

Going into the last hour, I’d hoped the bigger roach might show but it didn’t really happen and when I shouted the all out, my clicker was reading 169 fish which was really close to what I had last time I was here when I had 172 fish, that day I weighed nearly 22lb but I knew I had nowhere near that today, probably 15lb or so if the fish averaged 1.5oz apiece. I’d caught mainly roach with few silver bream, one chublet and one small perch. After packing up I went up to see how they’d done above the bridge, I asked Baz if he had 20lb and he said he wouldn’t be far off but Terry had caught really well too and there wouldn’t be much between them. At this rate, I’d be last in my section and my chances of winning the league out the window!

He pulled his net out and he had a lovely bag of quality roach which pulled the scales round to 21lb 14oz, then it was Baz’s turn and when he lifted his net out, it was going to be really close, the needle edged just past twenty and I called it at 20lb 6oz, two brilliant nets of fish and I knew we had nowhere near that. Adie was next and he had loads of fish for 13lb 8oz and then it was my turn and if I was to stand any chance of winning the league I needed to beat Adie’s weight, as I tipped the fish into the weigh sling, it was going to be close and Terry called it at 14lb 10oz – phew! The trouble was that put me on 10 points in the league and I needed Digger to beat Graham in the other section. 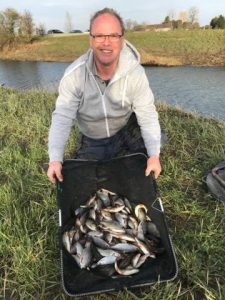 Terry had lovely net of quality roach for 21lb 14oz 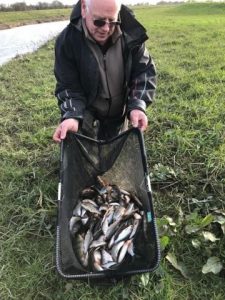 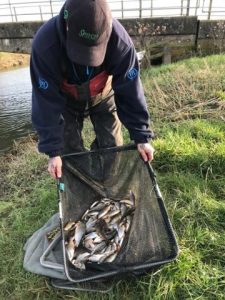 Adie had loads of fish for 13lb 8oz 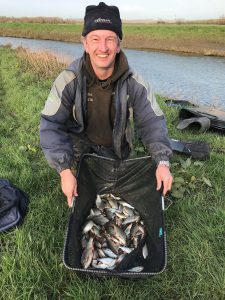 We loaded the cars and headed back to Midelney, I asked Fieldy if he’d won the section and he had with another cracking net of roach weighing 18lb 8oz, Digger had also done well with 13lb 12oz of roach and then Dave had struggled for 1lb 8oz but the late start hadn’t done him any favours. Thanks to Rob Cox for the photos*

Graham won the other section with 18lb 8oz of mainly roach*

The final leaderboard after seven matches and dropping the worst result looks like this,

So the payout on the day worked really well with the top three weights picking up anyway, I have to say I’m gutted at not winning the league, I still had a nice pick up of £60 for the runners up spot which softened the blow a little. I’m not really sure what more me and Adie could have done, we both had similar nets of fish and just couldn’t catch quality fish in the numbers they were getting above the bridge. I did miss/bump/drop off a fair few but even with those fish I still wouldn’t have caught the 6lb I needed. Missing the first match also meant I couldn’t afford any slip ups but I had a really good league, winning two matches, framing in two others and catching nearly 56lb of fish over the six matches I fished.

Between the seven of us today we had 104lb 2oz of roach, that’s brilliant fishing, it would have been interesting to see how a couple more pegs in each section would have fished. I do think we’ve only really scratched the surface and that there are probably loads of other good areas too and we wouldn’t know about them if we fished the same bits of river, week in, week out. There are so many fish in the rivers at the moment (admittedly not all the way through) and you rarely see another angler! I bet there are some big fish present too, chub, bream and perch and looking on maps, so much river that never gets fished.

Before I go here are a few facts and figures from what has been a really enjoyable little league, we tried some different venues including rivers, the canal and a private pond and have had some great days fishing along with a few where it was really hard but I’ve loved it and it’s made a change from fishing the same places every week. I’m hoping to do it again next year and we can build on what we’ve learnt this time and incorporate some more new venues.