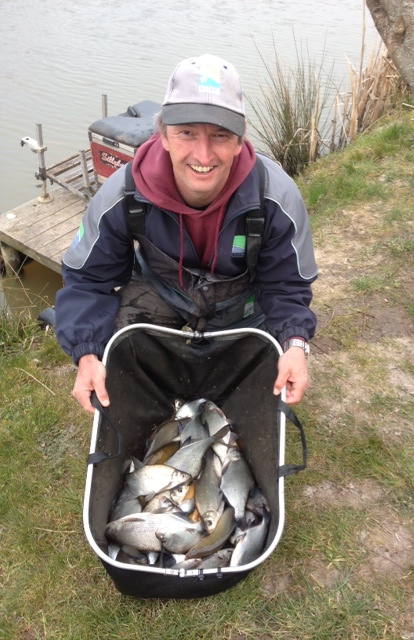 I was thinking the other day whether there was such as thing as the perfect match? I suppose before I attempt to answer that, we need to look at what it actually means. You could say that if you achieved what you set out to do, then you’ve fished a perfect match, that could be winning a competition, securing a section win for your team, qualifying for a big final or even just doing as well as you think’s possible from a mediocre peg. But lets think about it in a little more detail, we’ve all had matches where we’ve come away, knowing we should have done better, we might have even still won the match but lost loads of fish. Some of you may be thinking, ‘Does it really matter?’ and no, I suppose in the grand scheme of things, it doesn’t, but I still think this has the makings of an intriguing subject!

In its simplest form, the perfect match would be one where you sat it out for a big fish, had one bite, landed one fish and won the match, your plan worked perfectly and you have a 100% success rate, you literally couldn’t do anything else, but those kinds of days are very rare and I’m struggling to think of an example where that’s happened to me.

Perfection is hard to achieve though, five or six hours is a very long time and it depends on how we are defining perfection, are we saying you have to hit every bite and land every fish, if that’s the case, off the top of my head, I haven’t been able to think of any examples. There have been times where everything’s gone to plan and I’ve won the match, I remember once hooking and landing five chub on the Isle to win but I still missed two bites, so close but no cigar! Another time at Summerhayes, I had fifteen bites in the first hour and hit every one, I went on to achieve my goal and win the silvers but I missed bites and bumped fish after the initial sixty minutes, so a perfect hour, but to maintain this for the full duration, takes some doing.

So I suppose we have to say then, that missed bites and the odd bumped fish are inevitable and we can’t dwell too much on them, basically if you walk away from your peg and you feel you’ve fished a good match, then it’s job done. By this I mean, you might have changed tactics/feeding/bait which has resulted in you winning or framing when you wouldn’t have done if you’d have carried on as you’d started. We’ve all had those ‘What if?’ days where you’ve been driving home after the match thinking ‘If only I fished that line an hour earlier, I’d have won instead of being third’.

The trouble is, we all fish perfect matches with the benefit of hindsight, obviously at the time you don’t know what the winning weight will be, so saying you should have taken your time with a big fish or fished a new line is nonsense really because you didn’t know at the time it was going to make any difference! Similarly back at the results you find out you’ve missed out by a few ounces and you’re left regretting swinging that 3oz rudd that dropped off (that’s happened to me loads of times) but you didn’t know it was going to be crucial at the time or else you’d have netted it, you might well have got back and you were 5lb off the pace so in that case, that 3oz rudd wouldn’t have made a jot of difference!

Also I think we have to bring enjoyment into ‘The Perfect Match’ equation, if you’ve really enjoyed yourself and won the match, maybe that’s as good as it gets. By that I mean, maybe you’ve used your favourite method, put together a lovely net of quality fish and claiming top spot in a match you’ve always wanted to win, was the icing on the cake, you then drive home beaming from ear to ear, I mean does it get any better than that? If you wanted to be greedy, maybe you add beating a top angler off the next peg as well! 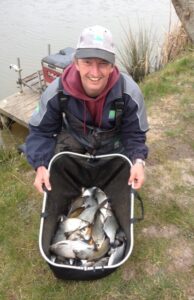 Nearly 20lb of Summerhayes silvers and with some carp, I won my first match there

I’ve been trying to think of matches that’s I’ve fished that qualify for the title of ‘The Perfect Match’ and it’s a lot harder than I thought it would be, I’ve been fishing for nearly forty years and have fished competitions for most of that time which equates to something like 2000 matches to choose from! I did do a ‘Hit Parade’ back in 2013 which listed my top ten match wins (and can be found here if you’re interested), I’ve won a few matches since then but thought it would be a good place to start for contenders for ‘The Perfect Match’.

Looking through that list, there are some of my most enjoyable matches ever, among them are first wins at a venue, personal best match weights and massive bonus fish, but do any of them qualify as a ‘Perfect Match’? Well, certainly the top three are still right up there and tick a lot of the boxes and all of them involved nice nets of quality silvers. Ilminster Canal came in at number three, a lovely days fishing on one of my all time favourite venues, Summerhayes was number two, my first overall win there which included the top silvers weight, there were some good anglers in attendance too and I only lost one decent skimmer all match. At number one was my first (and only) match win at Chris Haines’ pond with a lovely mixed bag of fish weighing 42lb 14oz, another cracking days fishing although I did lose a decent carp, it probably had the edge over the Summerhayes win because it was my birthday and Chelsea won 8-0 and were crowned champions, so although not necessarily a perfect match, I think it’s the closest I’ve ever come to a perfect day!

Have you ever fished a ‘Perfect Match’?