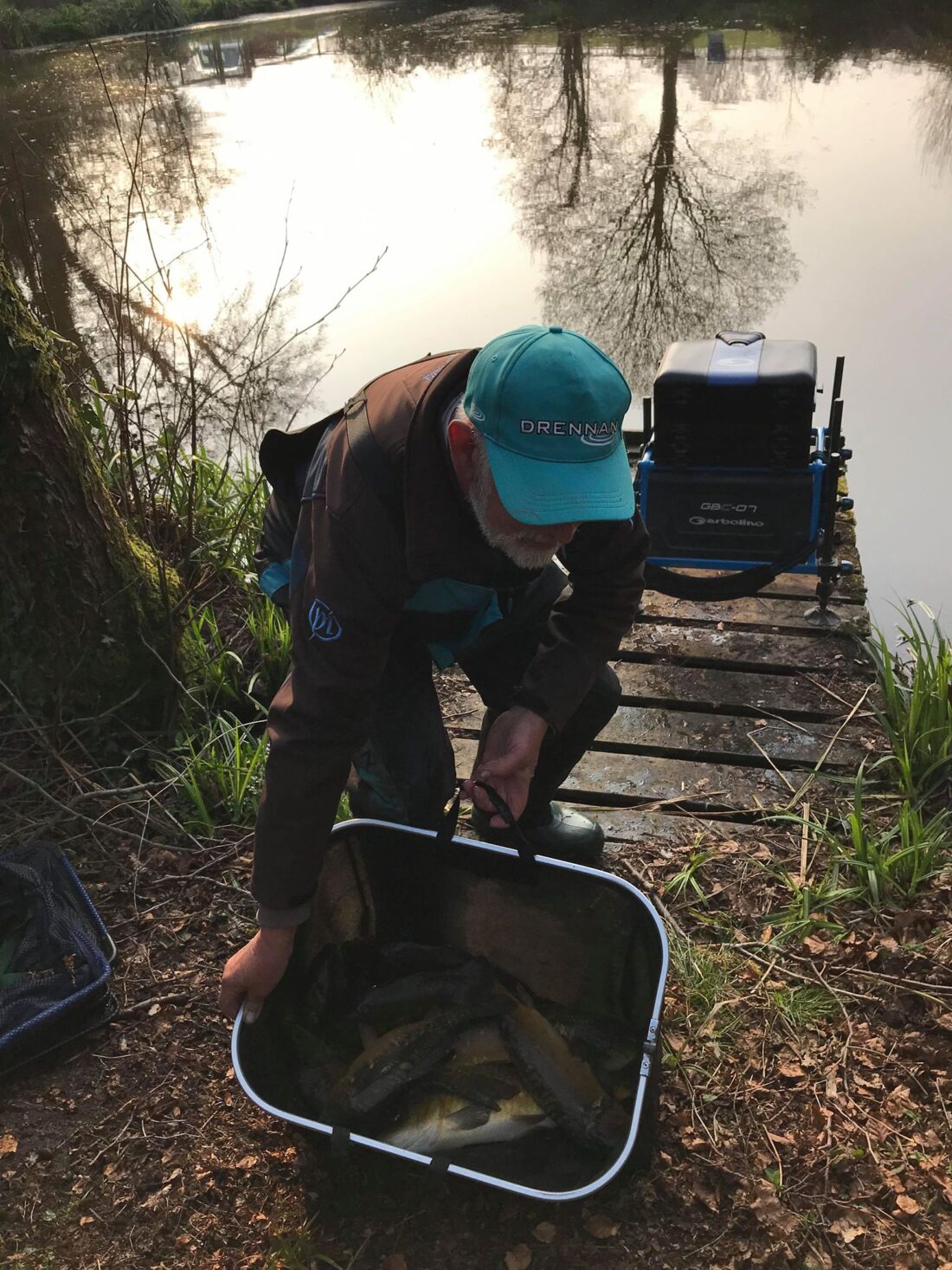 With the Spring League starting next week and a section at Sadborow once again, Les somehow roped me into some swim clearing (yes you read that right!) with the promise of a little knock up afterwards. We met for breakfast before heading out the pond and spending an hour or so trimming vegetation and generally tidying the swims up including giving the island a haircut.

With Hoff not fishing, Les did the draw and I pulled out peg 7 which wouldn’t have been my first choice but then I said that about peg 4 in the last match and then had a lovely days fishing! For company I had Bish on my right with Les on peg 8 on my left. As we were setting up, there weren’t as many fish moving about as usual which may have been down to all the early disturbance.

I set up a Drennan 0.4 gram Carp to fish top two plus two and 11.5 metres, a 0.3 gram Drennan Margin Crystal for the inside line to my left and an inline dibber to fish shallow. On the side tray, I had Bait-Tech Scopex corn,  micros, 6mm’s, live and dead reds plus some groundbait I’d mixed up the night before.

Les got us underway and I cupped in micros and dead reds on the short line and then corn and micros at 11.5 metres before starting shallow with a banded 6mm pellet, lifting and dropping the rig while firing out a few 6mm’s on a regular basis. I fully expected to catch quite quickly but it didn’t happen and looking round the pond, it was the same for everyone, had all the fish gone into hiding after all the racket we’d made earlier or perhaps they were sulking after the addition of some Semtex (Siltex) earlier in the week!

After half an hour, I did have a bite but when I lifted the pole up a tiny roach flew out of the water and fell off! Bushy on peg 5 had the first carp, followed shortly by Chilly and then when Bushy had a second I had to try something else so swapped to my on the deck rig with corn on the hook but never had a touch on that either! Les had a carp and then Oz had one and it was like the middle pegs were devoid of fish although that wasn’t true as we could see loads swimming about! I tried a bit of stalking but they just didn’t want to know, Butch had a decent skimmer opposite on peg 2 but as the first hour came to a close, me, Picky, Mark and Bish still hadn’t caught a fish!

After an hour and a half, I was on plan C, which was the top two plus two line, a lot earlier than I would have liked. I did miss a bite and then nearly two hours into the match, the float went again and this time some elastic came out before I netted a 3lb carp hooked under the chin! Before the start, Bish was asking if the big chub had been caught lately and I said I hadn’t seen it for a while and then blow me if he didn’t hook a decent fish which turned out to be a chub getting on for 5lb! I missed another bite and thought we might start to get a few now but then my next two bites resulted in a roach and a small perch which I chucked straight back.

While I was on the short line, there were loads of carp out in the middle so I had another half an hour playing cops and robbers but to no avail! The pegs on the ends (Chilly, Bushy, Les and Oz) were still getting odd fish and Les even turned to the dark side judging by how shallow his rig was although he said it was tangled up! ‘Fish Whisperer’ Bish had a couple of carp from his short line but I was still stuck on one and Picky and Mark were yet to catch!

With about two and a half hours to go, I fed four big pots of loose groundbait and dead reds on the inside line and would try it with an hour or so to go. Back on the top two plus two line, I finally hooked another carp and landed a nice 5lb ghostie but would need to catch a few more if I was going to threaten the top four today. Bish had another carp and Butch landed his second skimmer and then for good measure added a carp as well. Picky said there were loads of carp to his right but loads of floating maggots weren’t doing him any favours as they were ‘right on it’!

No more bites on my short line, so with ninety minutes to go I tried the inside line and had a really positive bite on three dead reds but a tiny perch wasn’t the result I’d hoped for! Bushy had slowed up but Chilly was still getting the odd fish and Les was now getting a few from up in the corner along with the odd stalked fish on his ‘tangled’ rig! Out of desperation, I shallowed up my dibber rig to 12 inches, stopped feeding pellet and tried just flicking the rig at fish, out of the blue, the float went and I had my third carp and in the remaining time, I managed two more to finish on five and I was left wishing I’d tried it an hour earlier! Les had a fish on as he called all out but it did him under the pallet (painful!). Picky had caught a few carp to finish with a flourish but Mark had blanked on peg 3 and I’m glad that peg’s not being used in the league.

After packing up, we walked round to weigh Bushy in first, he had eight carp for 25lb odd (I forgot to get a photo of the weighboard and couldn’t remember the ounces!), Chilly had seven for 21lb something, Mark hadn’t caught and then Butch had four carp and two decent skimmers for 18lb plus, Picky didn’t weigh and then Oz had eight carp for 27lb to go into second place. 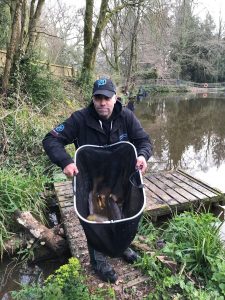 Bushy had eight carp for 25lb from peg 5 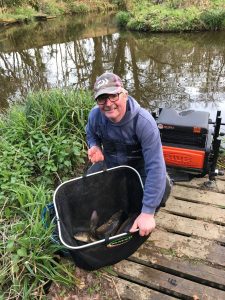 Chilly had seven for 21lb from peg 4 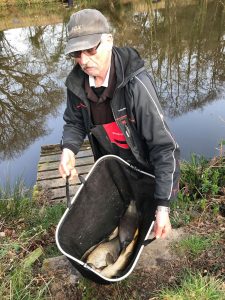 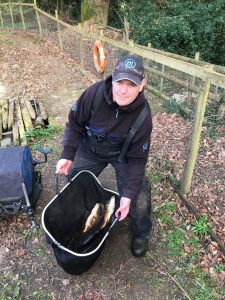 Oz had eight carp for 27lb from peg 9

Les had nine carp for over 32lb so that fish he lost at the end didn’t cost him, my five fish went 15lb odd and then Bish had five carp and that chub (which weighed 4lb 10oz) for 16lb. So despite struggling, it had still been quite a close match with only a couple of fish separating several places. 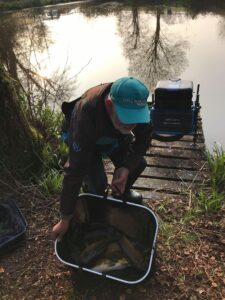 Another quick reminder to sign up for the newsletter if you haven’t already, details are in the sidebar on the right if you’re reading this on a laptop or scroll down if you’re on your phone.

Next up – The Spring League