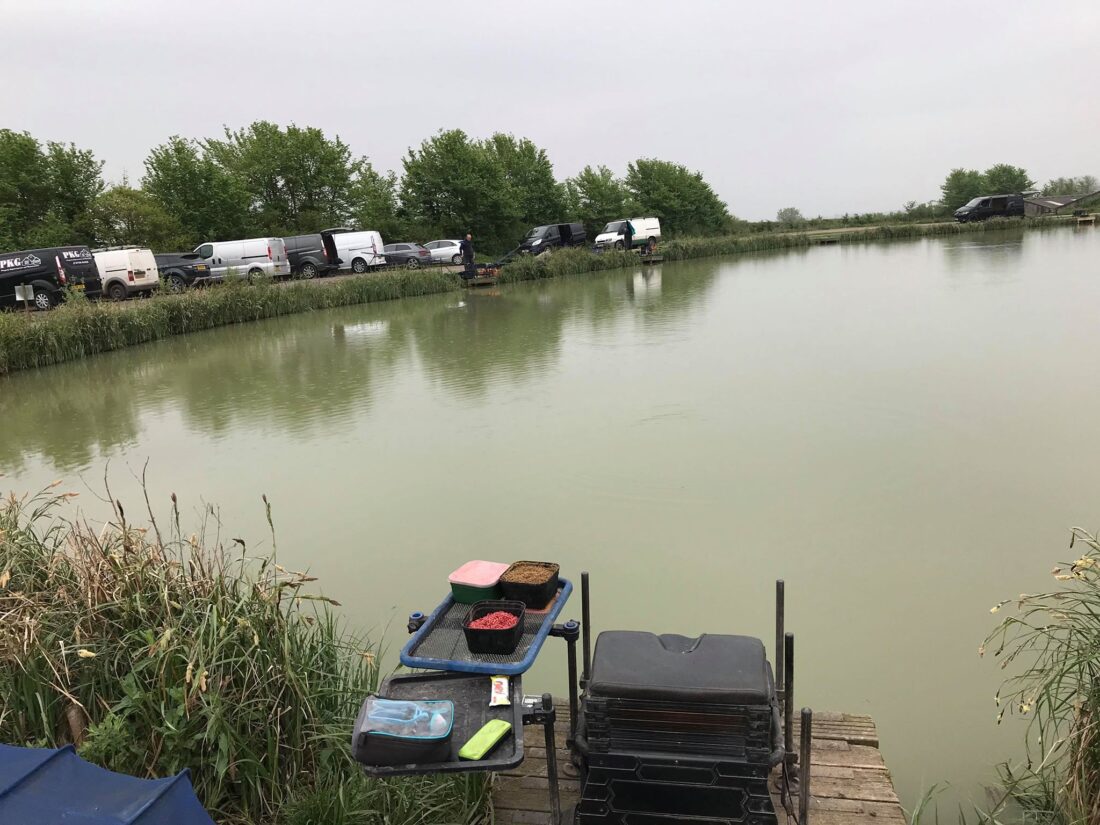 After having probably the best day’s silvers fishing I’ve ever had on Friday, I couldn’t wait to get back to Todber for another go, so I booked into the Wednesday open. The weather was back to normal with heavy rain and wind forecast, I met Scotty and Shep at Cartgate for breakfast before making our way to the fishery. As I walked in to pay my pools, not only was England megastar Des in attendance but Guru backed Paul Holland was fishing today, along with all the usual venue experts!

John announced the draw and we were all on Hill View today, I pulled out peg 44 with Des on 43 and Mark Harper on 45, this could be painful! Scotty was on 42 and I asked him what my peg was like, he didn’t look overly impressed although it had the top silvers weight on Good Friday so hopefully I’d get a few. 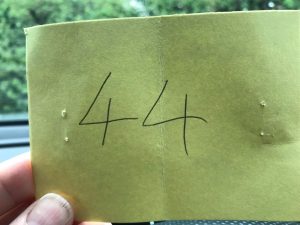 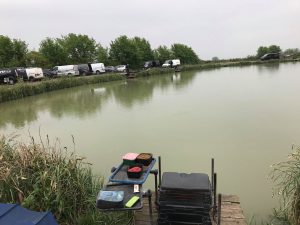 My peg looked alright although I wasn’t sure Des would let any fish get past him!

My peg looked quite nice but there were loads of fish crashing about in the reeds, so they were either spawning or getting very close to it. I set up two Drennan 0.4 gram Carp 1’s, one for a top kit plus two and the other for 10 metres and a little hand made float for fishing on the inside to my left. After Friday’s match, I made sure I had plenty of bait, so along with some micros and corn I had two pints of dead reds, a pint of live ones plus two kilos of Bait-Tech Special G Green and Juice groundbait I’d mixed the night before.

Just before the start, the wind got up and it started lashing it down so I nipped back to the car to put my wellies on and prepared to batten down the hatches. The all in was shouted and I fed some micros and corn down the edge and then two balls of groundbait on the short and long lines, I went to unship only to find my fourth and fifth sections were stuck together – great start! Oh well, I’d have to fish with a section stuck out behind me, I baited up and flicked the rig out and as I went to ship out I realised I’d hooked the bottom of my keepnet. This was going well and I’m sure a certain Mr Shipp was quaking in his boots as he netted his first carp of the day!

I finally got my self sorted and the first bite resulted in a small carp, more followed along with one decent skimmer and a 4oz rudd, I was catching well whereas Des was absolutely flying! Most of the blokes to my right were on the method and not really catching so I was doing okay and after an hour I had eight carp, a carassio plus a few silvers for probably 20lb, somebody asked how Des was doing and he was admitting to 40lb already, the man is a machine!

Going into the second hour, the rain got heavier, the wind got stronger, it was freezing cold and on our bank we were getting it straight in the chops. Mark even had to go to his van to get some tissues so he could wipe his glasses off! My bites slowed right up with just the odd small carp and even smaller tench to show for my efforts, I tried feeding again but it didn’t really improve things and if I sat there with corn on the hook, I’d have to wait ages for bites with the result normally a tiny tinca.

Mark was starting to catch quite well on the method, I could see Scotty netting some decent silvers and Des was still emptying the lake, I really didn’t know what to do next. After three hours I tried down the edge for the first time with corn on the hook and it was a massive anti-climax, I missed a couple of bites before catching another baby tench and I was going nowhere fast. I decided to stick to fishing maggot on the short line and hopefully some decent skimmers would show up.

I was getting quite a few tench between 1oz and 8oz and even had a lovely little golden tench but was only getting the occasional decent skimmer, several times I’ve hooked a fish which I was sure would be a decent tench only for it to turn out to be a small carp or carassio and then just to rub salt into the wound, I saw Des hold up a big tench for Scott to see and he replied saying he’d already had one of a similar size!.

The rain and wind showed no sign of abating and I was soaked through (it would have been a good test for my new waterproofs!), I was still putting the odd fish in the net but to be honest I was going through the motions a bit as I knew I wasn’t catching well enough to do any good and I didn’t know what to do to try and improve things. With around half an hour to go, the rain finally eased off a little bit, it felt a couple of degrees warmer and I started catching well again and was even playing a carp when the end of the match was signalled.

I took my stuck sections round to Scott to see if he could help get them apart and Des said he was good at doing it so with me and Scott on either end, the master worked his magic and I had two bits of pole again!, thanks guys and hopefully some of his fish catching expertise will have transferred itself to the carbon!

I finished packing up and as I was loading the car, the scales arrived and a quick look revealed Paul Holland was in the lead with a brilliant 195lb 2oz from peg 35 which included 28lb 2oz of silvers, then Scotty weighed 38lb 12oz of silvers which wasn’t bad as he said he hadn’t caught much! Then it was Des’s turn and after all his nets were weighed and totted up, his total was 196lb to go into the lead by just 14oz. I weighed mine just out of interest and I had 18lb 10oz of silvers and 49lb 4oz of carp so still a decent days fishing. Mark had 125lb 2oz and then Martin Rogers on 47 had 145lb and Paul Greenwood on 48 weighed 130lb 2oz. 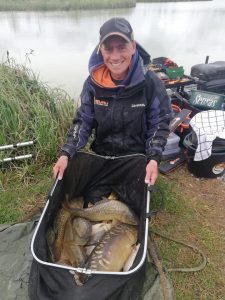 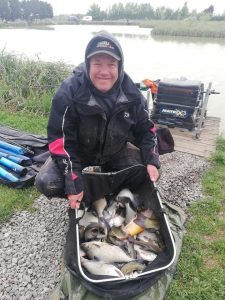 Scotty had the top silvers weight with 38lb 12oz after initially fishing for silvers then switching to carp and then back again!* 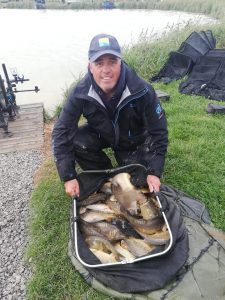 Des won again, this time with 196lb, giving me neck ache in the process!* 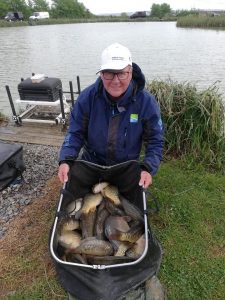 Then the anglers behind us with the wind off their backs fared a bit better, Dave Willmott had 168lb including 25lb 12oz of silvers and Johnny Grey had 142lb 12oz from peg 53. Paul Barnard had 148lb 2oz over on peg 57, Darren Scott had 146lb 2oz from peg 60 and Nigel Bartlett finished second in the silvers with 32lb 12oz from 61. 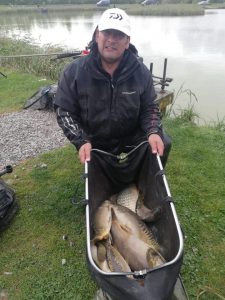 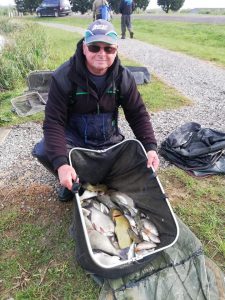 Nigel Bartlett was second in the silvers with 32lb 12oz*

So I hadn’t disgraced myself on the silvers front and the weather certainly hasn’t done me any favours but on the carp front, these guys are at a different level and there’s a lot to learn. It’s an amazing venue and I can’t wait to come back for another go.