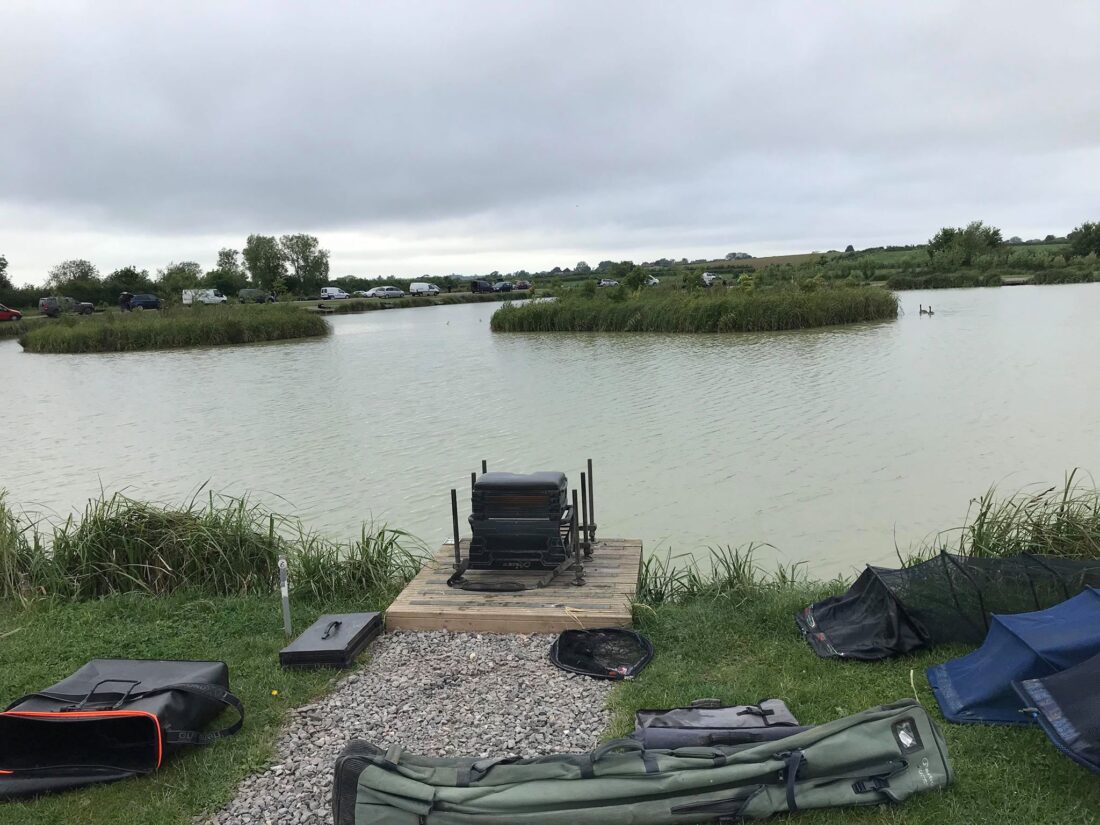 For my second match with Stoke AA we were on Hill View at Todber Manor, Steve P contacted me in the week and said he wouldn’t mind giving it go so I met him bright and early at Cartgate for breakfast (well I was a bit late so nothing new there!). We made good time and were soon at the fishery, I popped into the shop and bought three pints of maggots (two live and one dead). I also picked up some Guru Super LWG size 16 Ready Rigs to see what they were like. The first person I bumped into was the lovely Steve Chant who was also fishing today, after a quick cuddle, he said the others were up by the lake so we drove the short distance and parked up behind the rest of the cars. 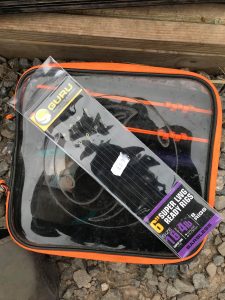 There was a good turnout with twenty anglers fishing including Dan Squire who was fresh from winning the silvers the previous day with a fantastic 91lb of skimmers. After we’d all paid our pools, it was time to draw and I pulled out peg 40 which I quite fancied as I had an empty peg to my right and the wind was blowing from left to right into pegs 42 and 43. John Simms was on my left with Chris White on 42 and David Simms next to him, Steve P had drawn up the arm close to where he was last time. 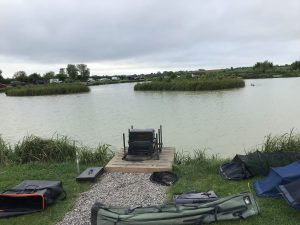 I set up a Drennan 0.4 gram Carp 1 to fish top kit plus two and 10 metres, a rig to fish up the edge to my right and also a shallow rig as the match yesterday had been won off peg 48 with over 200lb caught up in the water although admittedly it wasn’t as hot today. I had loads of bait with me, four pints of maggots in total, pellets (micros and 6mm), corn plus some Bait-Tech Special G Green and Juice groundbait I’d mixed the night before.

The banter was already in full flow and it was decided that a single whistle blast five minutes before the start would be the signal to put our nets in and then a double toot at 10:00 would begin the match, but just to confuse things there was another match on the other lakes and they blew their whistle a couple of minutes early so I didn’t know whether I was coming or going!

When our 10:00 whistle went, I cupped in two balls of groundbait on the top two plus two line and then micros and corn down the edge. I started short with three dead reds on the hook and it wasn’t long before I had a little tench, followed by a 4oz skimmer and then I’ve hooked a lump and the way it was fighting, I was sure it was foulhooked. While my elastic was being stretched all across the pond, I could see Mr Matrix, Andy Downton up on 34 getting the odd fish on the method, Marco had an early fish on the pole and David Simms landed a couple of carp quite quickly.

I kept waiting for the fish to come off but I started winning the battle and then managed to slip the net under a nice 5lb fish hooked in the belly! More little tench and skimmers followed, I did have one better skimmer around a pound and another foul hooked carp but looking round the pond, more and more carp were starting to show. Chanter, Andy and Marco were all catching quite well shallow, James W over on 44 was getting a few as was David although he was having a bit of a nightmare with his elastic snapping.

I’d been feeding 6mm’s on the longer line and went to 11.5 metres with the shallow rig but it was a real struggle to hold the pole in the wind and no bites after ten minutes saw me back on the short line but with only the odd small fish to show for my efforts I had to try something else. I put on a banded 6mm pellet on the depth rig and fished at 10 metres, pinging in a few pellets, this was better and I started catching a few carp along with a nice tench of 1.5lb although I’ve lost a few that were probably foulhooked.

I started feeding 6mm’s on the shorter line and up the edge, where I was also feeding some corn but would leave that until the last couple of hours. John was getting the odd fish on the feeder and I could see Chris W and David catching from their edge lines. After a couple of hours, I’ve come back in on the short line with banded pellet and started catching well, mainly carp from 2oz to 8lb, including a couple of gorgeous little ghost/koi type carp and several carassio to about 3lb. I’ve pulled out of a few fish which I think might have been carassio as they are notorious shy biters and quite a few of the ones I’ve landed have been hooked around the mouth. I also got snapped by a fish so put on a Guru LWG ready rig, I have to say they are very well tied although if I was being hyper critical, when I transferred them to my hooklength box, a couple of them were a little slack on the pegs although I’m only talking millimetres!

As we reached the halfway point, James W was bagging, every time I looked over, his elastic was out or he was netting a fish, David was also catching well but he was having an elastic nightmare and running out of top kits! Chanter and Andy were both still fishing shallow and doing well although Marco was now fishing the margins and getting the odd lump. The wind was still being a pain and John’s umbrella took off, landing in the lake, he managed to retrieve it without too much bother although he came in for lots of abuse about the size of his pole cup and why was he launching a boat!

With ninety minutes left, I had a go up the edge for the first time with corn on the hook and missed a bite before catching a pound skimmer, I missed a couple more bites but it wasn’t happening so I went back to the short line for the remainder of the match, I was catching quite well and then had three carp for about 12lb in the last ten minutes including one that I was playing when the whistle went. My clicker was reading 66 fish and I thought I must have probably 56 carp/carassio but didn’t really have a clue what they weighed, at an average 2lb apiece that would give me somewhere in the region of 100-120lb.

I’d nearly finished packing up when James walked by to start the weigh in, he said he’d clicked 111lb and apparently Dan Mattock on the end peg of the arm had bagged up as well. The scales started with Andy who had 11lb 8oz of silvers and then his two carp nets gave him a total of 100lb 13oz, Marco had 79lb and then Derek had 41lb 6oz which included a nice ghostie. Dennis had 13lb 13oz followed by John who weighed 24lb 4oz. 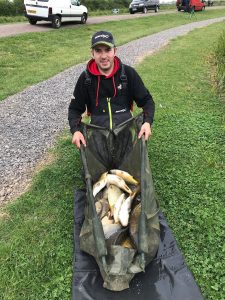 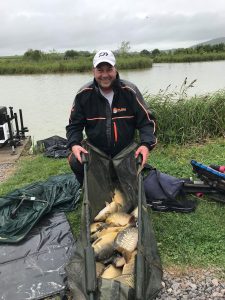 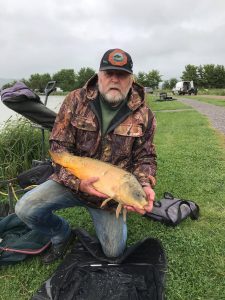 Derek had this lovely ghostie 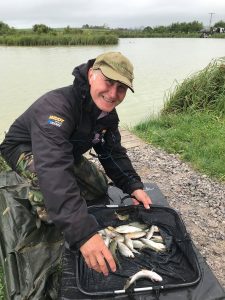 Dennis had 13lb 13oz which included 4lb 4oz of silvers 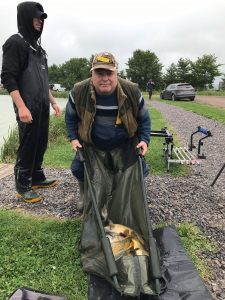 My silvers went 6lb 12oz before my first carp net went 50lb 4oz and the second net was 45lb 4oz (not a bad split!) to give me a total of 102lb 4oz which I knew wouldn’t be enough today. Chris W had 82lb 15oz which included some lumps and then David had 79lb 13oz. Next up was James W and he was well out with his clicking as he went into the lead with 140lb 13oz which also included the top silvers weight so far of 12lb 8oz. 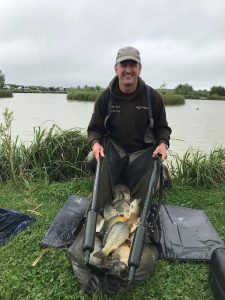 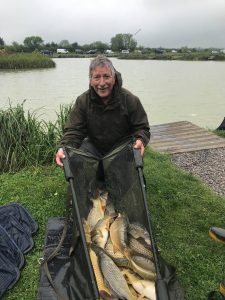 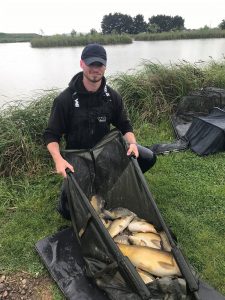 Kev Francis had 55lb 15oz and Dave Chidzoy on peg 48 weighed 92lb 12oz, Lee Smith had 54lb 12oz and Steve P had 21lb 10oz. Dan Mattock had caught all day and went into second place with 114lb 14oz and then we got to Dan Squire who had four nets in and when they were all totted up, his total was 155lb 6oz and he was looking good for the win. 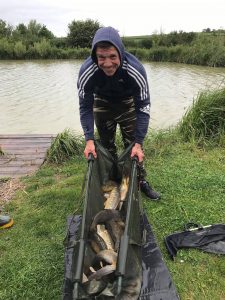 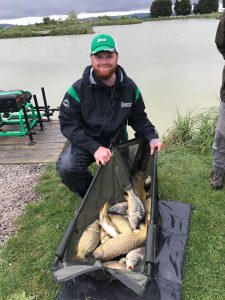 Dan carried on where he left off yesterday with another win, this time with 155lb 6oz

Dave Hilton had 79lb 10oz which included the biggest fish of the day, a carp of 12lb 12oz, Mike G had 56lb 2oz, Dave P had 45lb 8oz and then Neil Muir weighed 57lb 7oz. Last but not least was Mr Chant who had 90lb on his clicker, his first net weighed 45lb 1oz and his second weigh went 44lb 15oz which is accurate clicking in anybody’s book and an almost exact split of the nets too but then he spoilt it by weighing a tench of 1lb 3oz to give him a total of 91lb 3oz! 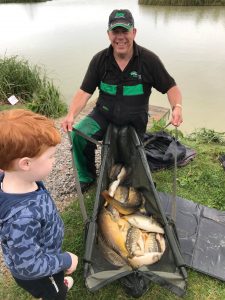 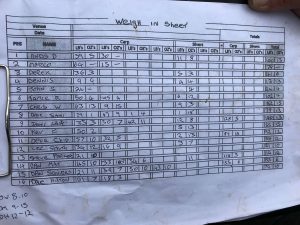 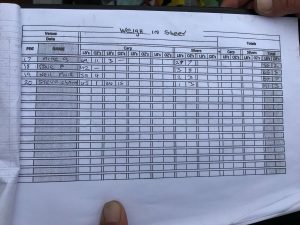 So another really nice days fishing, I’ve ended up fourth, just out of the money and if I’m honest I’m not getting it quite right, I could have stayed fishing for silvers as I had 4-5lb in the first hour but then again I’ve had quiet spells when I’ve tried shallow and up the edge and also lost loads of fish so probably wouldn’t have been too far away.

It was great to meet some more of the Stoke lads and I’m looking forward to the next one at Trinity Waters in a couple of weeks, I’ve only ever fished it once before so any advice or info greatly received!