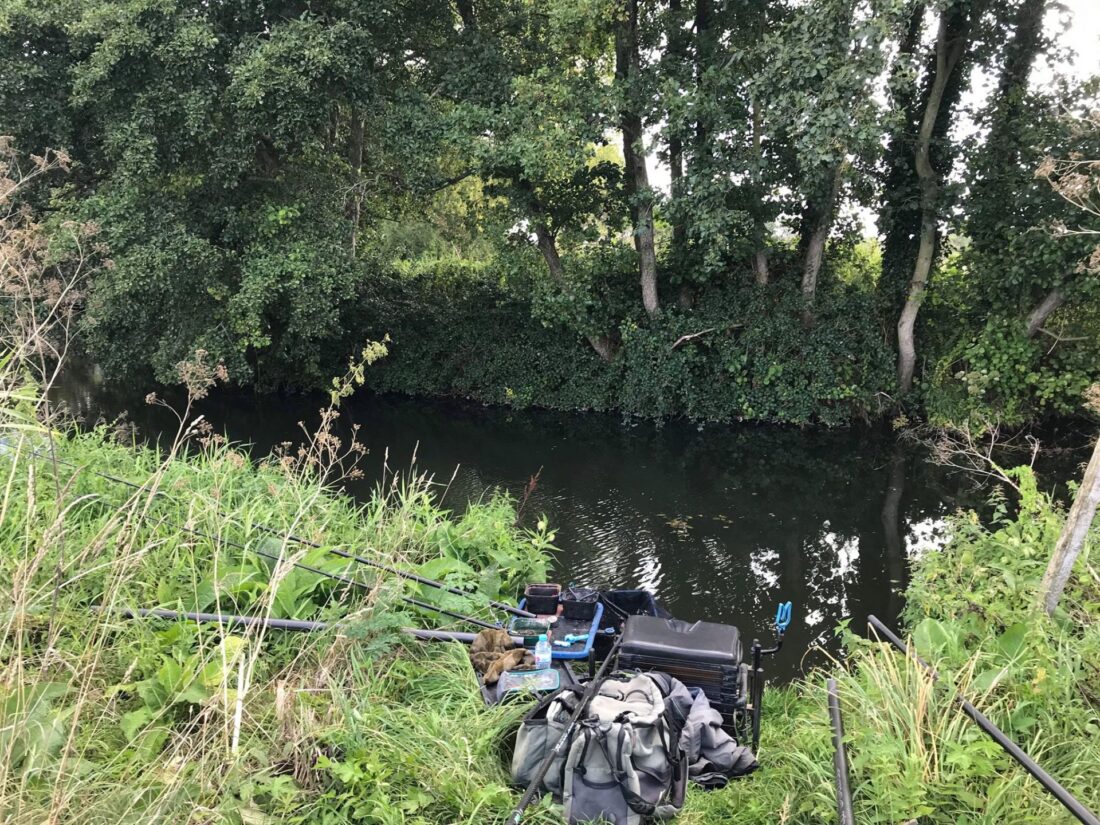 For the away leg of this inter-club fixture we were at Parrett Works, a stretch of river I don’t think I’ve ever fished before. It was all a bit last minute as originally I’d arranged for this match to be on the 22nd Sep but due to a fixture clash I had to hastily try and squeeze it in and get enough anglers to field a team so a massive thanks to Terry ‘The Toast’, Dave ‘The Terminator’ Phillips, Paul Adams, Rob Cox, Ian Burton and Leighton Cox who all stepped up to the plate – brilliant support.

By all accounts the fishing would be challenging with 4-5lb a good weight but I was still really looking forward to fishing a new venue. My day didn’t get off to the best of starts when I set my alarm for 6:00 but turned it off and then woke up at 6:50! Loads of rushing around followed along with a fair bit of swearing but I managed to get to Cartgate just after 7:30. After a nice brekkie, we followed the Stoke lads to Parrett Works where the draw was taking place. After paying the pools and having a go on the raffle, it was time to decide our fate for the day and they let us draw first. I pulled out peg 29 which meant absolutely nothing to me although a few of the locals said it was a decent peg.

We were able to drive across two fields and park by the river which made life a lot easier and then my peg was three quarters of the way down another field. I got to my peg and one of the Stoke lads said peg 31 wasn’t drawn so I was the end peg which is always a bonus. It looked nice with lots of cover on the far bank although the river was very clear and it didn’t look like there was much flow. I set up a 1 gram bodied float for down the middle and it was deep, probably ten foot in places although plumbing up, the depth varied quite a bit. I also set up a 0.6 gram DH16 for fishing against the far bank cover and there was still a decent depth across. On the side tray I had maggots, casters and Bait-Tech Super Seed hemp. 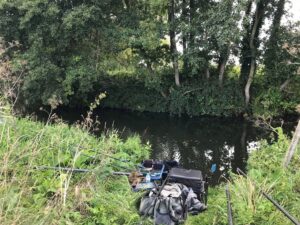 A long toot on a whistle got the five hour match underway, I started down the middle with single red maggot on the hook and I always get quite excited for the first bite at a new venue. I didn’t have to wait long as the float sailed away first put in and I swung in a gudgeon to get off the mark. I was feeding hemp and caster down the middle and also across in two areas, either side of the brambles you can see hanging down in the photo above. Several more gobies followed so I tried double maggot and caster but I couldn’t seem to get any bigger fish.

I went further down the peg to 11.5 metres and it was still a bite a chuck from gudgeon, then the float sunk from view once more but this time some elastic came out, I shipped back carefully and netted a nice chublet of 8-10oz, that’s more like it! No more decent fish there so I came back to the top three plus two line in front of me and had a small roach followed by a nice one of 4oz or so and already it seemed to be a case of chasing the fish round a bit. I was still feeding hemp and caster across but wanted to leave it as long as possible before trying it.

After an hour and a half, I had around 25 fish for a pound and a quarter but bites were starting to dwindle down the middle so I picked up the lighter rig and went across above the brambles, I started getting bites from gudgeon along with the odd roach and had a nice dace of 4-6oz but it was fairly short lived so I went below the brambles and had another little run of fish and over the next hour or so, I kept swapping between these two far bank lines but then disaster struck when I hooked a bramble and I had to pull for a break, the 0.10mm hooklength finally gave way but the float flew back, wrapped round my pole rest and was smashed to smithereens!

I had another go down the middle but it had died a death now and I only had one more gudgeon, so I had to get another suitable rig out for fishing across to the far bank. Bites were now hard to come by over there as well so I started searching further down the peg, I held the float back against the cover and it shot under and before I had time to strike, elastic was streaming from the pole tip! I was hoping it would be a chub but then a 2lb trout leapt out of the water and did it several more times before throwing the hook and all that disturbance killed the swim completely.

Adding another section I went 13 metres to the right and started getting bites, the first couple of fish were chunky roach which I netted to be sure but then it was back to catching gobies and it definitely seemed like you’d only get a couple of slightly better fish before they wised up or the gudgeon moved in. David Simms wandered down and said he’d packed up and everybody in our section had struggled. I went back below the brambles but no bites and time was starting to run out, with five minutes to go I went back above the brambles and the float buried, I struck and this was a better fish, I shipped back quickly to get it away from the far bank and I could see in the clear water it was a decent chub, it didn’t give me too many problems and I slipped the net under a nice fish around a pound and half, what a last gasp bonus on a tough day.

There was still time to go back out and I missed another bite before a whistle signalled the end of the match, I had 54 fish (plus a few minnows I didn’t count) which I thought would give me 3-4lb. Chris Deady soon arrived with the scales as he hadn’t fished today, I pulled my net out and was pleased to see the display read 4lb 7oz, Julie next door on 28 had 9oz and then Leighton on 25 had done well with some decent dace and chublets for 2lb 7oz although he’d lost a couple of chub. Ian Burton on 24 had loads of gudgeon for 1lb 1oz and David Simms had a nice roach and a chublet for a pound. 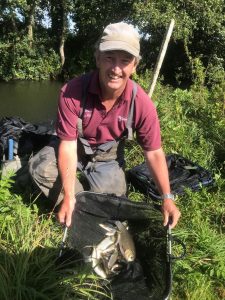 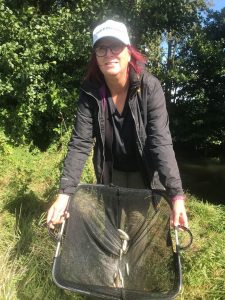 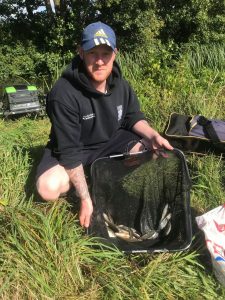 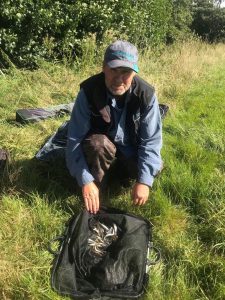 Ian had loads of gudgeon for 1lb 1oz from peg 24 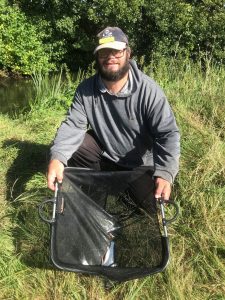 David had a nice roach and a decent chublet for 1lb

David Hilton had 1lb 1oz from peg 20 and then Chris White had done well to catch 2lb 1oz from peg 17 as loads of leaves had made presentation difficult, John Loader was the last angler in our section and had four decent chublets and a few bits for 2lb 9oz from peg 16. So I’d won the section and started to think I had a chance of sneaking into the frame. As we loaded the cars, some of the anglers from the other section started arriving back and it had been a struggle there to, Rob Cox said he thought the top weight there was 3lb something so had I actually won it? 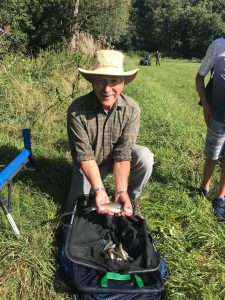 Back at the results and I asked Terry how he’d done and he said he’d won the other section with 3lb 7oz which meant I was top weight on the day! Chris read out the results starting with the sections, Derek Goad won the top section with 2lb 1oz, Leighton won our section then John Loader was third, Terry second and I was called out in first place and picked up £50 (plus a nugget off Rob). Adding up the weights, Ilminster’s seven anglers totalled 13lb 8oz to claim a narrow victory over Stoke whose top seven weights added up to 12lb 1oz. The icing on the cake was that the match was also for the J Irish trophy and as a Stoke member, I would get my name etched on the trophy, what a lovely day! I got to pick the winning number in the raffle as well but my drawing hand let me down this time!

The club would just like to say a huge thanks to Stoke AA for hosting us and making us feel very welcome and I look forward to returning the favour when they come to us on 10th November. On a personal note I just wanted to say a massive thanks to Terry, Leighton, Paul, Ian, Rob and Dave for making sure we had a decent turnout at short notice and putting in a brilliant performance on a venue most of us had only seen for the first time today! 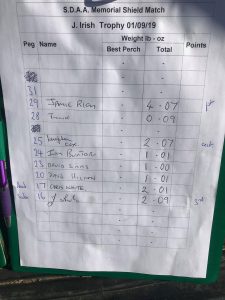 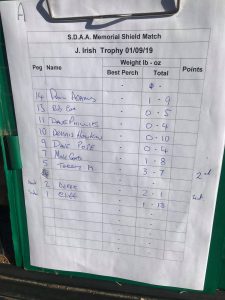 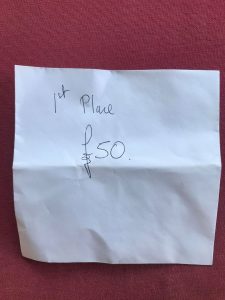