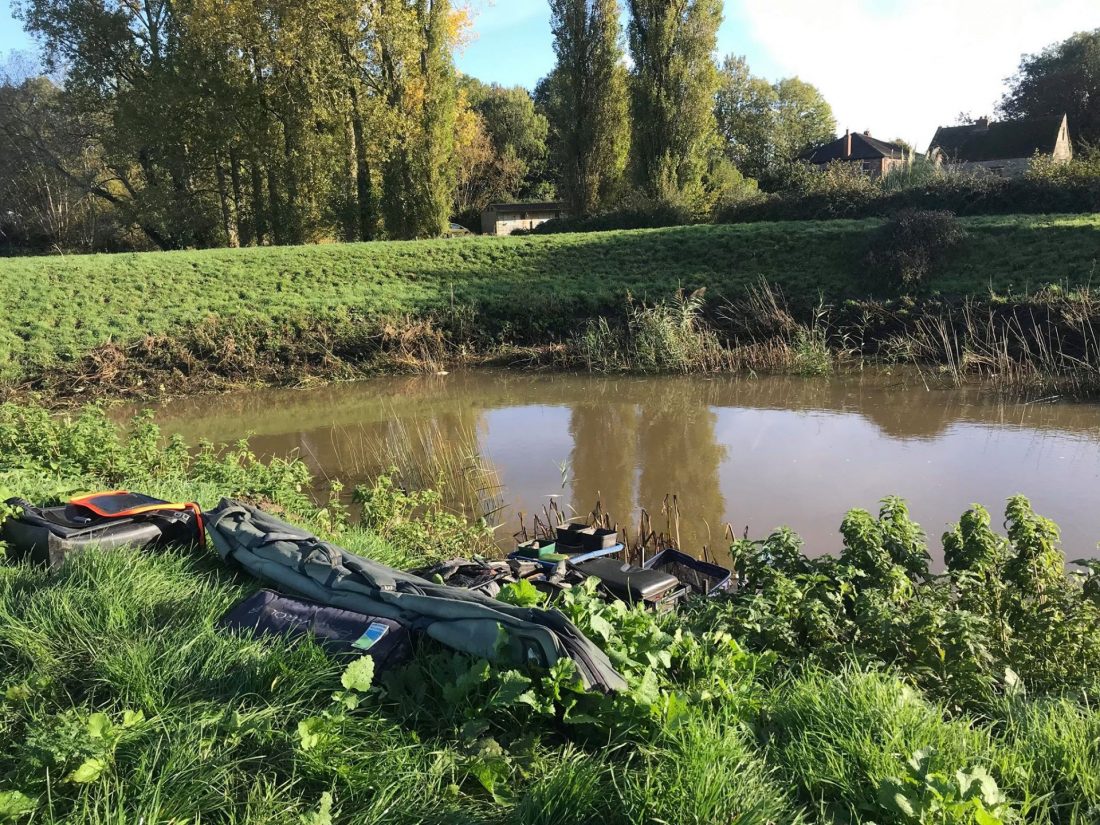 After the river was flooded for the first V.E.S. Precision match which would be rescheduled, I was hoping we’d actually be able to get the league started this weekend but with heavy rain forecast on Saturday would Mother Nature scupper us once again? I popped down to have a look and was amazed to see the river spot on with a tinge of colour. It stopped raining mid-afternoon and although I was sure the level would come up during the rest of the day, with no more rain due, it would hopefully be fishable Sunday.

Waking up in the morning we’d had a frost but more worryingly, checking the river levels online, it hadn’t dropped as much as I thought it would and it was dubious whether we’d get on the river. At the bowling club, as people started arriving for breakfast, Rob turned up after having a look at the river and when he showed us some photos, it was definitely touch and go. The general consensus was that the level should drop during the day so we decided to go for it.

I announced the draw and as always, people were hoping to draw 120, 125, 126 or 128 although all of the pegs in today were more than capable of throwing up decent weights. Fieldy pulled out peg 125 and could be heard wheel spinning out of the car park before anyone else had drawn!, Ben Simmonds was fishing his first match with us for a while and bagged himself a cracker in the shape of 126 and Steve ‘The Pole’ Parker was on 120 so my pound was in grave danger today.

With just a few balls left in the bucket, I asked a decidedly hungover Jake if he’d draw mine and I was a bit disappointed when he handed me a ball with 124 on it, he then pulled out 124a for himself and even though I’ve done well from both those pegs in the past, I wasn’t sure we’d compete with the pegs already mentioned. By the time I got down the river all the parking spaces had been taken so I had to spend ages flattening the vegetation on the opposite side (the joys of being a match secretary!).

The river actually looked really nice, it was up and coloured and as we walked to our pegs there were odd fish topping and I thought we’d be in for a good day. My peg was a proper armchair with steps cut in the bank so a massive thanks to the lads in the last work party and all their hard work! I set up a 1.5 gram DH13 and plumbed up to find a good depth right through the peg although there was a fair bit of weed around which was a bit concerning. On the side tray, I had casters, maggots and Bait-Tech Super Seed hemp. 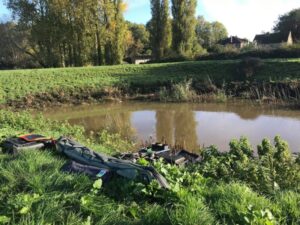 With a ten minutes to go I walked down to see Jake and he was still rather green around the gills, back on my box, I shouted the all in and started with a single red maggot on the hook, feeding hemp and caster. I fully expected to catch first run through but that didn’t happen and I was coming back with weed on the hook every time so there was more weed there than I first realised. Ian Burton turned up with a cup of coffee as he hadn’t heard me shout and was waiting for the whistle, I told him he hadn’t missed much and he headed back to his peg, shaking his head as he went!

I tried just holding the rig back hard and burying the hook in a caster but I was still getting snagged no matter where I went in the swim and I lost a hooklength as well, this wasn’t going to plan! Shouting down to Jake he replied he hadn’t caught yet either but Fieldy was getting odd fish. There were still quite a few small fish topping and I couldn’t believe I hadn’t had a bite yet. I already felt like I was going through the motions but then after removing weed from the hook for the umpteenth time, I noticed the maggot was sucked. Next chuck I swung the rig in and it didn’t settle properly, I lifted the pole and could feel something very small wriggling on the end before swinging in a tiny roach to avoid the blank.

I did have another sucked maggot where I hadn’t seen a bite but with over an hour already gone, I was going nowhere fast so I decided to have a walk. First stop was Jake who said he only had a gudgeon and a minnow, then I walked up to Ian, he had a few bits, a 4oz roach and had a small fish while I was there. Next up was Redbridge where Steve P was in the weirpool but fishing the the tail of the swim, he was admitting to a pound and a half so was doing okay, Dave P was blanking in 112 but had missed a bite and then Vic Bush was on 109 (he had the choice of that or 108). He was fishing the stick and had a couple of roach and while I was there he had two more so there were a few fish there.

I walked back to my peg and with the odd small fish still topping, I had to try something else so set up a 0.6 gram DH16 to fish up in the water, around three foot deep. Flicking the rig out, I just let it go with the flow, it looked like it dragged under (which was impossible at that depth!), I struck and there was a fish on, a chunky 2oz dace. Next chuck another, then a little roach followed by a tiny chublet and it was a bite a chuck, Jake wandered up after seeing how they were doing below the bridge just as I swung in a small roach. He said they were getting odd fish with Ben the only angler catching regularly. So with two and half hours gone, it felt like I’d got this one horribly wrong but with nobody bagging in my five peg section, decent points for the league was still achievable.

I was catching some tiny roach and dace (no minnows as yet) so tried caster and managed a couple of chunky roach but bites were very infrequent so it was back to maggot with single bronze being best. Jake was catching now as well and it looked like he was fishing shallow too, I was enjoying myself and even netted a couple of fish but after two hours, just as I began to think a good weight was feasible, bites started to tail off and I was getting the odd tiny minnow as well, which is never a good sign.

Going into the last hour, a fish topped in the tail of the swim and then another right in front of me so I picked up the deep rig again but not a touch so I went back to fishing shallow, picking off odd fish until the end of the match. I had 42 fish on my clicker but I’d also caught quite a few tiny fish and minnows, that I hadn’t counted and thought I might have around 2.5lb if they averaged an ounce apiece. After packing up I took my kit back to the car before going up to weigh Ian in, he had 15oz but said he’d lost a nice roach, then I got to my peg and Jake called it at 2lb 15oz, he had 2lb 4oz which included some nice roach and then Fieldy had 9lb 10oz with some hemp roach. 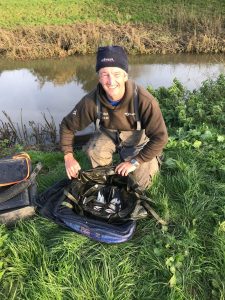 I had 2lb 15oz but had dropped a massive clanger by not fishing shallow earlier! 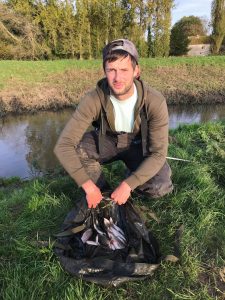 Jake had 2lb 4oz and was still hungover! 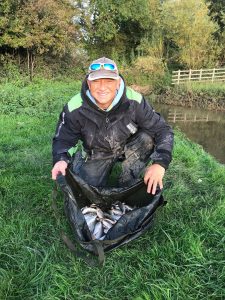 Fieldy had 9lb 10oz including some nice hemp roach

Below the bridge, Ben had the top weight with 8lb 7oz followed by Rob who had 2lb from 128 and Terry weighed 1lb 9.5oz on peg 129a so I was in third spot but would have to wait until the lads at Redbridge got back. Thanks to Ben Simmonds for the photo* 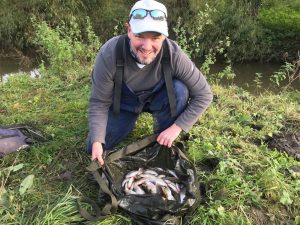 Back at the results and as Steve pulled up, he said he was top up there with 3lb 10oz and would be third on the day, taking a nugget off me in the process, Vic had 1lb 13.5oz and Dave had blanked so I ended up with a default section win and £15 plus two points in the league which was far from the disaster I’d imagined after two and half hours. I still felt like I’d dropped a massive clanger today though as I think 4-5lb was definitely possible from my peg and I could have got my league off to a dream start with a one pointer so a lesson learnt the hard way! Thanks to Dave Phillips for the photos** 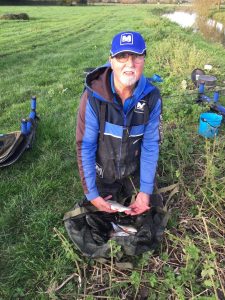 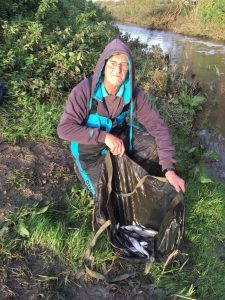 In other news, I’ve had some great feedback on the Q & A with Trevor Harrop last week and if you like the interviews I do, I’ve got an absolute belter coming in the next few days, I really enjoyed this one. I’ve asked quite a few high profile names in the past (I’m not naming names) and some have politely declined whereas others have said yes and I’ve sent the questions over and never heard back from them, I know they are all busy people but it doesn’t take long to do and you’d think they’d be grateful of the publicity, a chance to plug new products or whatever, even if it is to a relatively small audience, we are all potential customers after all!

A couple of them I would dearly loved to have added them to my interview roll of honour as they are the best of the best and I’d have been genuinely interested to read their answers, maybe one day. Anyway, enough of that, my next interview is with a very well known name but I’ll leave you guessing for now!