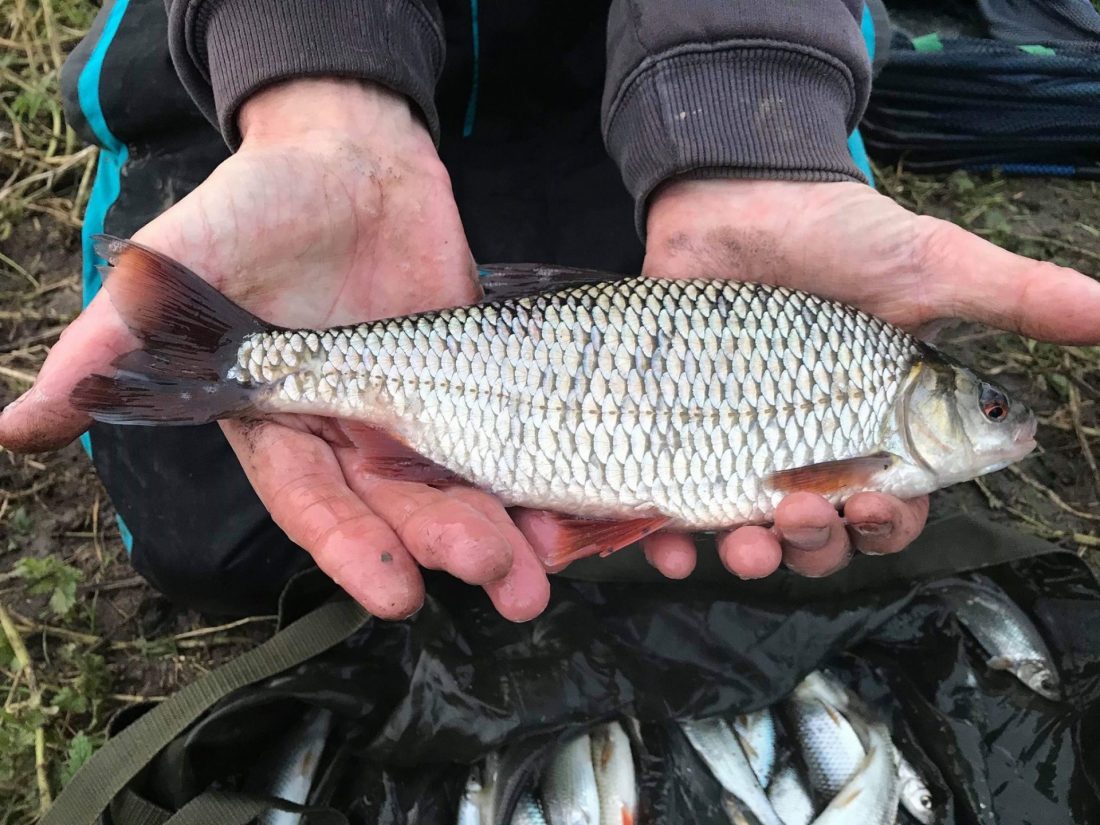 With rain towards the end of the week putting some colour in the river and the forecast for the weekend dry, everything looked set for a good match on the river. I met Rob Saturday afternoon and we walked the lower end and decided to put some pegs in at Hambridge which looked spot on along with Isle Brewers and a couple at Redbridge.

Waking up Sunday morning, we’d had a frost but I was still really looking forward to getting back on the river, as I headed to Ilminster, a pigeon landed in the road right in front of me and I couldn’t avoid it, there was an explosion of feathers and I hoped that wasn’t an omen for the day ahead! If there was one consolation for the poor bird it was that when it landed it was facing the opposite way so wouldn’t have known much about it!

At the bowling club, people started arriving and tucking in to the excellent breakfasts, along with the regulars, Steve Maynard made the long trip up from Cornwall and Dan Baldwin from Taunton was fishing his first match on the Isle. I did have 14 booked in but Digger was away on a stag do and Cannonball Dave had been poorly overnight (get well soon mate) so we were down to a dozen. Then came the first cock up of the day, the previous evening I’d sorted out 15 pegs in case anybody else turned up in the morning but then got myself confused when I took out two pegs because of Digger and Dave, which obviously left 13 in the bucket (I blame the pigeon curse!).

I decided to leave out 108 and either H7 or 124 and in the end went for the latter because it had been very weedy when I’d fished it the other week. I announced the draw and in my head had the usual mental wishlist of pegs (120, 125, 126, H5 and H6) but as people started delving into the bucket, these disappeared rapidly, Vic drew 120, Steve M had 126, Hurf was on H5 with Ian next door on H6 and Terry’s glass was positively brimming over as he took great delight in showing me his ball with 125 on it!

As Frank went to draw I asked him to pull one out for me and was gutted when he handed me H7, he had 129 but there was still a ball left in the bucket and everybody had drawn! This wasn’t an issue until I looked and it was 112, another peg I wouldn’t really have fancied but it did pose a problem in that Vic would be the only angler at Redbridge and didn’t know how to get there so I said he could follow me. I then realised that I needed to drop another set of scales at Isle Brewers and when I got outside, I picked up my bait that Steve had left for me and there was an extra pint of casters in the bag, Terry (in his haste to get to his flier!) had left his bait behind!

So after taking Vic to Redbridge and dropping off scales and bait at Isle Brewers, I finally headed to Hambridge and was rushing around like a headless chicken (or should that be pigeon!) to get ready before the start and you’re probably already getting a feel for how this match was going to go!

The river was pushing through but it looked like the colour was dropping out fast, I set up two rigs, a 0.75 gram bodied float and a 0.6 gram DH16, plumbing up there was a good depth right through the peg and although there was some weed about, it was fairly clear in front of me. On the side tray, I had casters, maggots and Bait-Tech Super Seed hemp. While I was getting ready, there was the odd small fish topping towards the bottom of the swim. 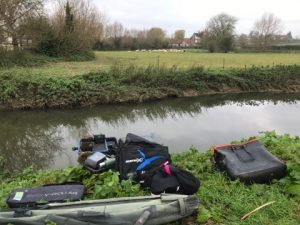 I shouted the all in and started with the heavier rig and single maggot expecting to catch small fish quite quickly but it didn’t happen and with Ian and Hurf above me catching well, the writing was on the wall already. I tried going further down the peg but started snagging up and I lost a few hooklengths, I tried burying the hook in a caster and going across with the lighter rig but after an hour I hadn’t had an indication and I was fed up already.

For the first time in a very long while, I thought about packing up and having a few hours fishing somewhere else before going back to do the results but of course I didn’t and went for a walk instead. Ian and Hurf were catching quite well, lots of small roach with the odd better one amongst them although Hurf was having a few pike problems. I went down to see Fieldy on H8 and despite it looking really nice with an inlet coming in and a chubby looking tree in the water, he’d only had two roach.

Back on my box I went through the motions again and lost a few more hooklengths before finally, after two hours, I had an indication and swung in a tiny roach. A few tiny fish were topping right at the bottom of the swim and I was wishing we’d put the peg a bit further down, especially as there was more far bank cover right on the bend, the other option was to fish running line which of course I didn’t have with me (give me a chance, I’ve only just got back into feeder fishing!).

I did add a couple of sections and went 14.5 metres down the peg but it wasn’t long enough and it was hard work! Then a slightly better fish topped down the peg so I actually got the 16 metre section out of the bag but no bites and there was no way I could do that for too long! I took that section off and went back to fishing against the far bank where there was a slight back eddy, after a few minutes, the float dipped and then went under, the strike resulted in a little bit of elastic showing itself and I swung in a small roach to double my tally.

Next chuck I had another and then missed a couple of bites before catching a tiny chublet, there was no way I could catch Ian or Hurf but at least I was getting a few indications now. Well I should have known better as the ‘action’ (I use the word very loosely!) didn’t last long and I went back to catching nothing. Out of sheer desperation I went back to 16 metres but as I tried to get the rig tight to the bank, the line got caught in some vegetation and I had to pull for a break. There was an almighty TWANG and not only had I lost one of my favourite rigs, my elastic had snapped as well, could this day get any worse!

Thankfully there wasn’t much time left so I went back to running the heavier rig through the middle of the peg and as the light was beginning to fade, I started getting the odd bite and and added three more tiny roach to my bulging net! The finish time arrived and I shouted the all out with the same sort of relief a battered boxer must feel when his trainer finally throws the towel in the ring! I can honestly say I didn’t enjoy one minute of that!

I packed up and then walked down with Hurf to weigh Fieldy in, he’d managed two more roach to give him 5oz and I didn’t think I had that, my seven fish went 4oz which just about summed my day up and then Ian Burton had a nice net of roach along with a slightly better perch for 7lb 15oz, Hurf had caught some better roach late on to weigh 9lb 11oz and then we headed above the bridge to weigh Rob in, he had three chunky perch plus lots of roach for 5lb 8oz. 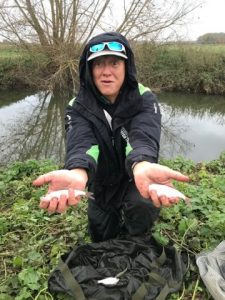 Fieldy had four roach for 5oz from H8 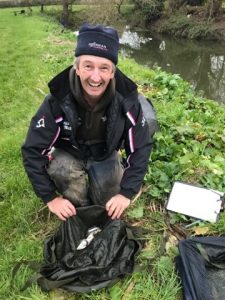 I had six roach and a tiny chublet for 4oz (mainly small fish!) 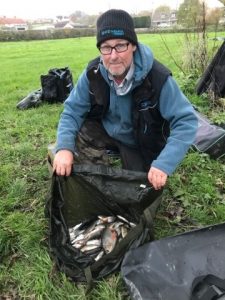 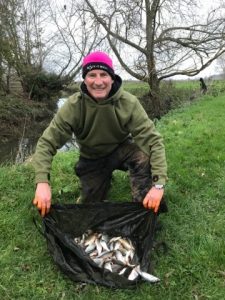 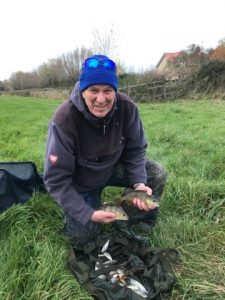 Rob had 5lb 8oz including some nice perch from H4

Back at the results and the pegs below the bridge at Isle Brewers had fished brilliantly, Frank had 12lb 14oz from 129, Dan had a lovely day fishing the stick float and caster in 128 to weigh 23lb of mainly roach and Steve Maynard had a fantastic 26lb 12oz of roach, dace and chublets on the whip from peg 126. Above the bridge it had been tougher with Steve P winning the section from 123 with 5lb 11oz which included a quality roach, Ben weighed 2lb 5oz from 124a and the two fancied pegs 125 and 120 saw Terry and Vic both weigh 4lb plus which just goes to show it’s never a foregone conclusion in this game. Thanks to Steve Maynard*, Dan Baldwin** and Ben Simmonds*** for the photos. 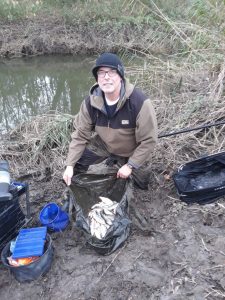 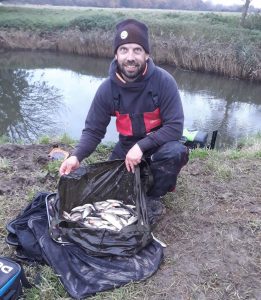 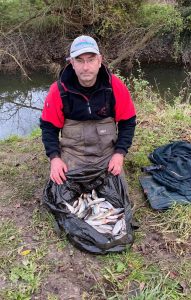 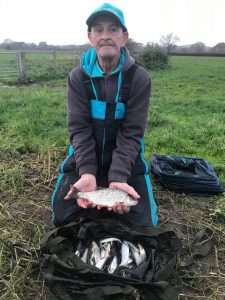 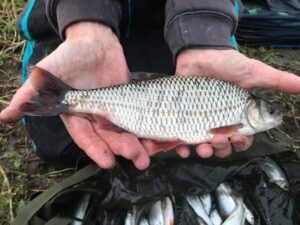 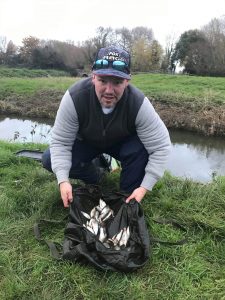 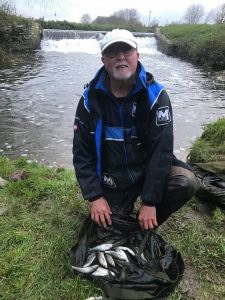 So a really bad day at the office for me (I knew I should have left H7 out!) but when I got home I had a lovely e-mail from somebody who was down here on holiday and contacted me via the blog asking about the river and it put the smile right back on my face!

Just to let you know we had a fantastic days fishing today fishing upstream in the Redbridge area I had two chub both around two and half pounds caught on breadflake with a small 10g Drennan cage feeder filled with liquidised bread. One fish came fishing opposite peg no 108, first swim down stream of the footbridge, second chub came further upstream where a tree overhangs a bend, also lost a good fish here on popped up cheesepaste. What a beautiful river you have, it’s a shame we are going home tomorrow. I have taken some photos so will send them on to you when I get home (need to get the wife to help me with this). Once again can I thank you for all your help I could not of got the results I achieved without your input and guidance, maybe we could meet up one day and have a days fishing and you can show me how it’s really done!

Will keep following your progress on the website so good luck for the rest of the season tight lines and very best wishes,

Lastly, beware the Curse of the Pigeon!