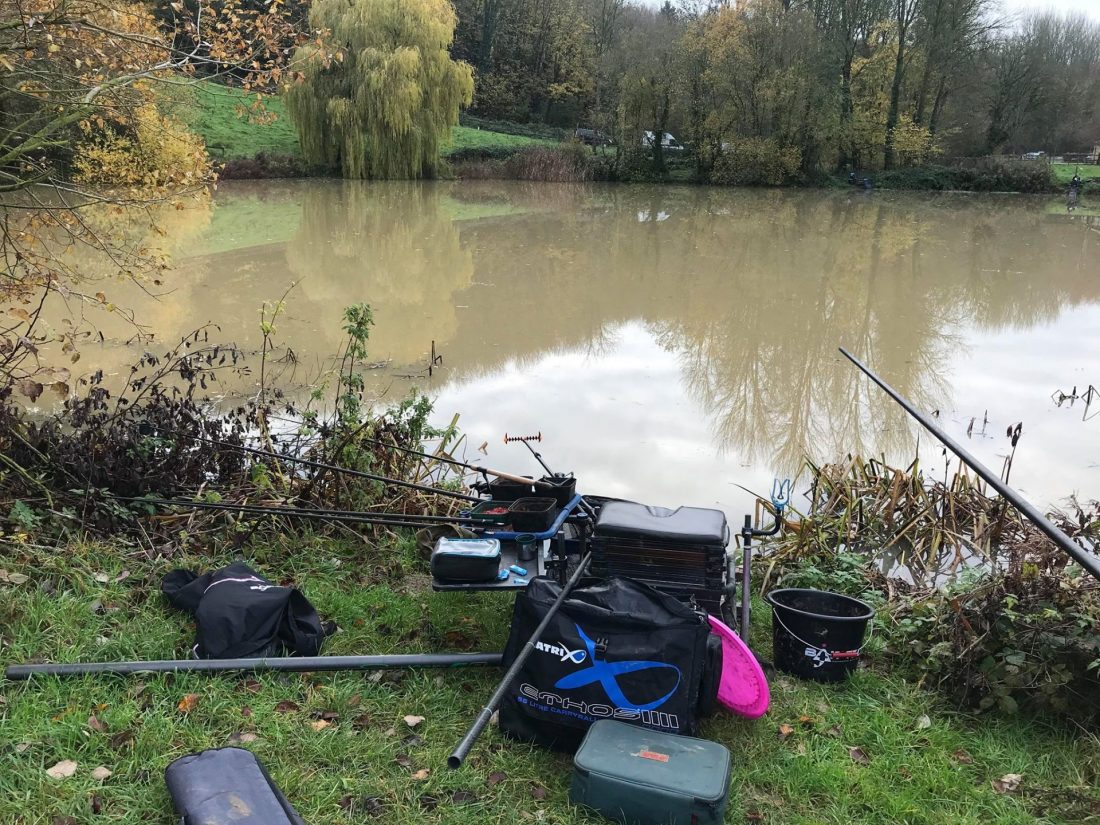 Loads of rain towards the end of the week scuppered river matches all over the place and the Isle was one of the casualties so we were back on the pond again. Andy Saunders was fishing again and it was nice to see Baz Morgan and Scotty Russell who were both fishing their first Ilminster matches for a while. We hadn’t had a frost and the forecast was for a mild day with no rain so hopefully the pond would fish well.

After another lovely breakfast at the bowling club, it was time to draw and when Baz went to stick his hand in the bucket, I asked if he’d pull a peg for me and he handed me number 8 before grabbing a ball for himself which put him on peg 7 next door. Scott had the last ball in the bucket which was number 2 where he’d won the last time he fished with us, would history repeat itself?

We got out the pond and it was very coloured but there were quite a few small fish topping and the odd bigger fish rolling out in the middle. I set up a feeder rod with a 20g Guru feeder for a gentle lob of around 20 metres and a 4 x 16 Preston Chianti to fish 11.5 metres angled to my left. For bait I had a pint and a half of casters, half a pint of red maggots, some dead reds, disco pinkies plus some Bait-Tech Pro Nat Bream Dark and The Juice groundbait I’d mixed up the night before. 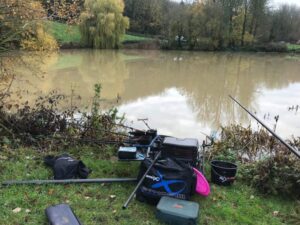 The pond was very coloured

I shouted the all in and cupped in three balls of groundbait on the pole line before starting on the feeder with two dead reds on the hook. In the last match it was hard going for the first half of the match and I thought it might be similar today. After around twenty minutes, I had a little rattle on the tip and then next chuck, a positive bite resulted in a small roach and I was feeling quite pleased with myself for getting the first fish on our side when I looked to the right and saw Andy Saunders netting a decent skimmer!

Over the next ninety minutes I had a couple more roach but not a lot was happening although I could see the guys on the opposite bank catching roach and Paul Adams on 20 landed a decent fish. With two hours gone, Cannonball Dave on my left hadn’t caught yet, me and Baz only had a few roach and Andy had that skimmer and a few small fish. Scott Jackson turned up for a walk round and said Scotty Russell was catching roach well and also had a skimmer, while he was with me Paul struck into a decent fish on the pole and landed a nice chub.

As we approached the two and half hour mark, boredom was starting to set in and I was just thinking about trying the pole for the first time when I had a lovely drop back bite and the strike was met with solid resistance, I played the fish with kid gloves before quietly slipping the net under a decent skimmer and I was hoping perhaps they’d finally got their heads down. Another half an hour passed with no more indications and Baz was now on the waggler and catching quite a few small roach so I decided to have a quick look on the pole.

First put in, the float buried and I had a small roach, next chuck the float went again but this time loads of elastic came out on the strike, I shipped back carefully and landed a nice chub around a pound and a half, a few more roach followed and I thought I was probably third on the pond behind Paul and Scotty who, by all accounts, had landed a bream to go with his earlier skimmer and was still getting a roach a chuck. Then I’ve seen Andy strike into a fish and he had his second skimmer, quickly followed by number three to go in front of me again. I chucked the pole up the bank and went back on the feeder as I knew I now needed skimmers if I was going to do any good.

Baz also went back on the feeder and with around an hour to go, he had two skimmers in two chucks and it was all getting very close. Dave started getting a few small fish but apart from a roach, I just wasn’t getting any knocks and time was running out. With just over ten minutes left on the clock, Andy had his fourth skimmer and it was looking like Scott would win with Andy second and then either Paul, Baz or me in third place as we all had two better fish apiece.

I was checking my phone for the time and then at 15:25, the tip dropped back and I struck into a decent fish, my heart was in my mouth as I knew I needed this fish to frame, I safely netted a nice skimmer and looking at the time, it was 15:28 so I quickly baited up and cast out again. As I tightened up, another glance at the time and it was now 15:29, I looked back at the tip to see it pulling round and another fish was on! As the finish time arrived, I shouted ‘All out’ followed by ‘Fish on’ and there were a few shouts of congratulations around the pond, at least I think that’s what they were saying! I safely netted another decent skimmer and packed up before taking some of my kit back to the car and getting the scales.

Steve P was first to weigh and had lots of roach plus a nice chublet for 3lb 11oz from peg 18, Fieldy was next and had loads of small fish for 5lb 1oz, Paul had two chub and a few bits for 3lb 5oz and then Terry ‘The Toast’ had a skimmer plus some roach for 3lb 2oz from peg 21. 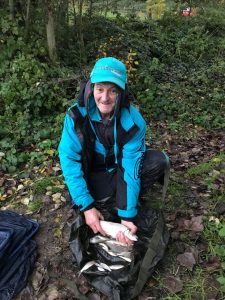 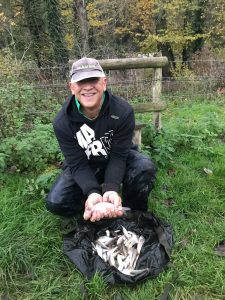 Graham had 5lb 1oz of mainly roach from peg 19 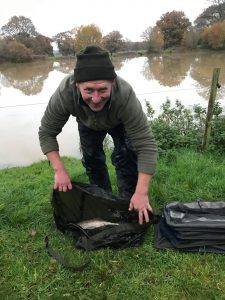 Paul ‘The Chubmaster’ Adams had two for 3lb 5oz 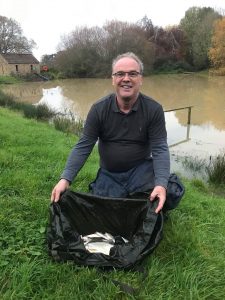 As we walked round to Scotty, he said he had over 80 roach, a bream and two skimmers for around 13lb and he was very close to his estimate as the needle pulled round to 13lb 8oz which would be more than enough to win today. Andy’s four skimmers and few small fish went a level 7lb and I was sure I didn’t have that, I thought I might scrape 6lb (three skimmers and a chub at 1.5lb apiece plus six or seven small roach). Baz had two skimmers plus some small roach for 4lb 1oz and then it was my turn. I pulled my net out and it was going to be close but I still thought I’d fall short, Andy called it at 7lb 10oz so some of these skimmers are pushing 2lb now. Last but not least was Cannonball Dave who had 5oz of roach. 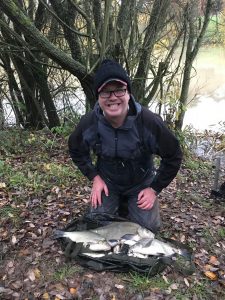 A cheesy grin from Scotty who won with 13lb 8oz although I’m not sure he’s ever walked further than peg 2 on the pond! 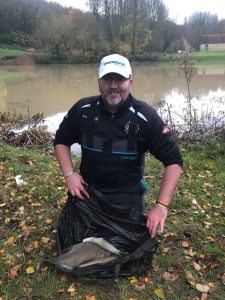 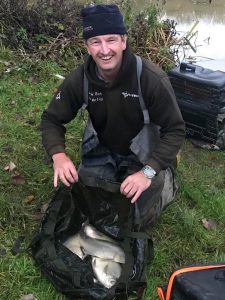 It was a case of the late, late show as two skimmers in the last five minutes boosted my weight to 7lb 10oz 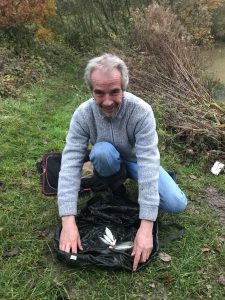 Dave ‘The Cannonball’ Phillips had mainly small fish for his 5oz!

Back at the results and Andy was third, I picked up £45 for second (plus nuggets off Steve and Andy) and Scott was today’s winner. It was a funny day really, there were some slightly better bags of roach (both Scott and Fieldy had 5lb+) but still not much in the way of quality and with it being coloured I thought a few more skimmers might have showed but they just wouldn’t settle and get their heads down. I’m quite enjoying doing a bit of feeder flinging although a few more bites would be nice and I still can’t get over how much of an adrenaline buzz I get when the tip goes round or the float goes under, even after forty years of doing this! I guess the day I stop getting that it’s the time to pack it in.

After four matches and dropping the worst result, the Warehouse League is beginning to take shape and currently looks like this,

With three matches to go, will we ever get on the river again? Andy will be praying for rain as he’s not a running water fan although he might have to bite the bullet if he wants to win this league!

It’s Ilminster’s Xmas Fayre on Sunday 15th December, weather permitting it will be on the river and everyone gets a prize! Food is included in the £15 ticket and the results and prize giving will be at Ilminster Bowling Club, if you would like to fish please let me, Max or Leighton at Ilminster Warehouse have your entry fee before Friday 6th December so we can get an idea of numbers and sort the prizes. There will be an optional £5 super pool on the day as well.

This year it will be known as the Chris Patten Xmas Fayre and Baz Morgan has very generously put up £100 prize money for the winner. There’s also a fantastic trophy which was made by the engineering firm Chris used to work for and so far there have only been four winners, Alan Dunn, myself, Scott Russell and Mike Hosgood, who will take the trophy home this year?

Lastly before I go, if you’re in the area make sure you pop into Somerset Angling in Bridgwater, great range of tackle and brilliant bait and if you need any info there is a wealth of knowledge available from the likes of Steve Kedge and Riverfest qualifier Simon Garbutt, if you’re lucky you may even be able to pick the brains of local legend Baz Morgan or former Kamasan Champion, Mike Stone. Click the link in side bar for more details.