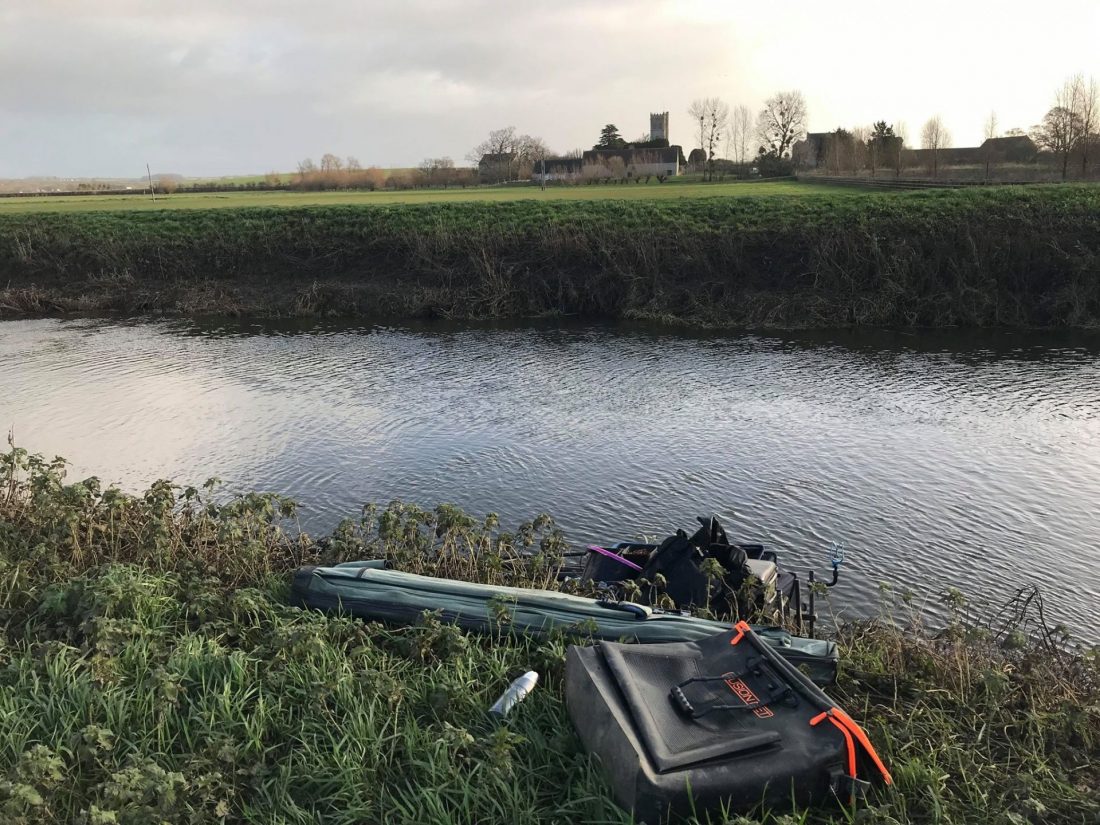 For round five we decided to use Midelney and Muchelney, two of my favourite stretches that are rammed with fish, they are SLAC waters so we can’t close them for the match but I popped down on Saturday to have a look and put some pegs in. I had originally planned to put three above and below the bridge at Midelney and four at Muchelney (two up and two down) but when I got to the former, that went out the window as they were pumping or had some gates open somewhere and the level was right down upstream of the bridge. The three pegs below looked lovely with loads of fish topping and occasionally scattering as a pike lunged for some lunch. I ended up putting four pegs in there before heading to Muchelney which looked really good as well with fish topping everywhere below the bridge (although that might have been down to the time of day and the light fading).

Sunday morning arrived and at the bowling club we ended up a few short as a couple were put off by the forecast which was horrendous with strong winds predicted and Dave overslept! I announced the draw and said if there were pleasure or pike anglers there we’d move to the next available peg. Paul Adams had to work in the morning and would meet us out there so I asked Terry ‘The Toast’ to draw for him and he pulled out peg 2 at Midelney followed by Muchelney 6 for himself and lastly peg 9 at Muchelney for me. That was the same peg I had last time we were there earlier in the year when I had 14lb odd, a nice days fishing but a long way behind Baz and Terry who were above the bridge that day and both weighed over 20lb.

We got to the river and there were no anglers there which didn’t surprise me given the weather predicted for the day. The banks were very muddy and slippery but I managed to get myself settled in nicely and there were loads of fish jumping all over the place and in between me and Digger by the bridge there was a pike that keep showing itself as it chased fish around. 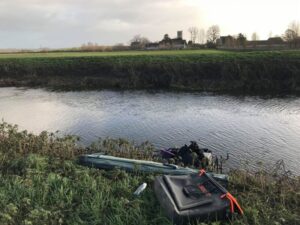 Not much to look at!

I set up a 1 gram bodied float to fish three sections to hand and a 0.6 gram DH16 to fish with a short line both with size 18 B611’s to 0.10mm. On the side tray I had a pint and a half of casters, red and bronze maggots, hemp plus Bait-Tech Pro Nat Dark that I’d mixed the previous evening. I was ready with around ten minutes to go so had a coffee (still fairly hot!) and then spent some time making sure everything I didn’t need was packed away. It might seem quite a minor thing but when you know the weather is going to get bad if you make sure your carryall is zipped up so your stuff isn’t going to get soaking wet (and you have a nice dry towel to wipe your hands on later) and you haven’t got to worry about bait box lids etc getting blown in the river, you can concentrate on your fishing!

Shouting the all in, I balled it on the top three line with three jaffas containing casters, hemp and a few maggots before starting with single red maggot on the hook, I let the rig travel through, holding back slightly and as it reached the extent of it’s trot, the float dipped before sliding away and I swung in a small roach. More followed and it was a bite a chuck, mainly small roach and after fifteen minutes I had 13 fish, I could see Digger swinging in fish and he said the lads above the bridge were catching as well. I tried double maggot and had some better roach that required netting but also tried swinging a couple that I really shouldn’t have and paid the price!

As the first sixty minutes came to a close, I had 50 fish on my clicker, mostly roach but with a couple of silver bream/skimmer/pommie things along with the odd bleak and tiny chublet for around 5-6lb, a fantastic first hour. Surely it wouldn’t last and I was expecting sport to tail off, pike strikes, the weather to get bad or a combination of all three to come into play at some stage. The second hour continued in the same vein as the first and if anything the peg was getting stronger and I was having spells where I was having to net every fish although rather annoyingly, I also bumped several fish on the trot when the maggot went over the point of the hook. I did try caster and had a couple of nice fish but I couldn’t keep them coming on it.

The clicker was reading 102 fish for 10-12lb after two hours and the bites were still coming strong, in amongst the roach I was getting the odd bleak and added a 4oz perch and even a small rudd. I was still getting problems bumping fish with the maggot over the point of the hook so when I snapped a hooklength I stepped up to a size 16 B611 to 0.14mm which seemed to help. Digger was still netting fish regularly and said they were bagging above the bridge. I was feeding casters and hemp every chuck along with the odd nugget of groundbait and it felt like there were an awful lot of fish in the peg, I was catching roach of all sizes from quarter of an ounce up to 10-12oz.

At times I was having to change things around to get bites, holding back hard, inching the float through, flicking the rig upstream or out past my feed but the fish were still coming thick and fast. I did lose several fish that were solid on the strike and I have my suspicions they might have been decent perch as I did land one around 12oz, I also dropped off several roach during the day. Three hours in and I was up to 150 fish and starting to think a really big weight was on the cards.

The wind was being a pain but it was nowhere near as bad as I was expecting although at one stage it started to rain quite hard to go with it. I was still trying different things and had a decent run of fish hooking a caster like a maggot. With an hour and a half left, the clicker was reading 200 fish and the catch rate was showing no signs of slowing down. Digger said his bites had tailed off so he went out further with the pole which resulted in a run of better fish before that slowed as well.

I was on target to do 275 fish (50 an hour) and with the light starting to fade in the final half an hour, I buried the hook in a caster and slowed the float right down and had several clonking roach which made me think I was going to have a storming finish but if anything I then had my worst period of the match. Back to double red maggot and I added a few more roach to end the match with 263 fish and didn’t have a clue what weight I had, I knew I had over 20lb but how much more?

I packed my gear up and had a coffee (warm enough but not exactly steaming!) before loading the car and going up to see how the others had done. Terry ‘The Toast’ was first and had a lovely net of mainly roach which pulled the scales round to a level 20lb, Steve ‘The Pole’ was next and he also had a nice net of fish for 9lb 14oz which included a roach getting on for a pound. Digger had 11lb 13oz and then it was my turn, when I pulled my net out, I knew I’d done well as I struggled to get it up the bank! The first weigh went 16lb 11oz and when I tipped the rest of my fish in the sling, Terry called it at 14lb 6oz to give me a total of 31lb 1oz and my best ever river weight. 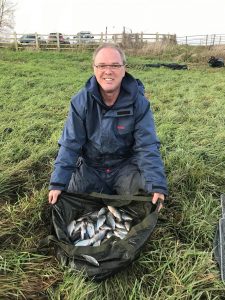 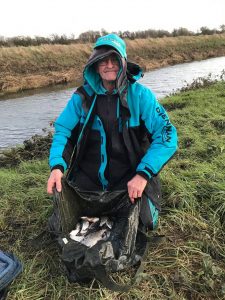 Steve had 9lb 14oz which included a clonking big roach 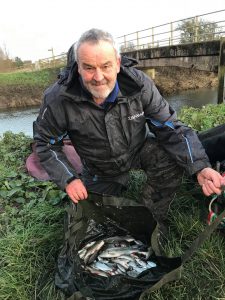 Digger weighed 11lb 13oz from the first peg below the bridge 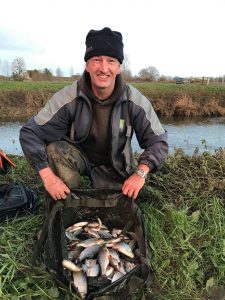 We then headed back to Midelney to see how the rest had done and it had fished it’s socks off there too! Andy ‘I don’t like flowing water’ Saunders had the top weight there with a brilliant 22lb 6oz of mainly quality roach, followed by Fieldy with an excellent 17lb 12oz and Paul Adams with a not to be sniffed at 9lb 10oz, absolutely fantastic fishing and in far from perfect conditions. So I won my first match for a while, picking up a handy £70 plus a clean sweep of nuggets from Andy, Steve and Terry in the process. Thanks to Paul Adams for the photos* 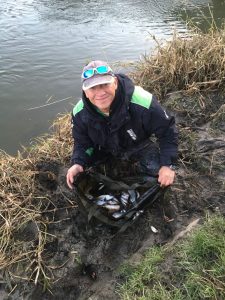 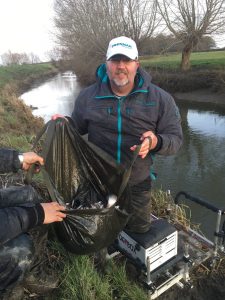 Andy had a brilliant 22lb 6oz for second on the day*

Incredible fishing on two brilliant stretches and you rarely see another soul fishing at either location, there were loads of fish topping below me today so I’m sure we could have put another peg or two in. The trouble is knowing how far you can go, historically both at Midelney and Muchelney, normally the first four pegs are really good before the weights tail right off but surely it can’t be that exact a science? I mean what’s stopping the fish at peg 4? Why don’t they just all carry on to peg 1?

The one thing I do know is that there were an awful lot of fish in my peg today, I did bump/lose some better ones and also dropped off half a dozen and missed lots of bites, the weather certainly didn’t help and I’m sure 35-40lb was a very real possibility in better conditions. Lord knows what somebody like Rory Jones or Hadrian Whittle would have done from that peg, 50lb? It’s an impossible question really because, as we all know, each fishing match is a unique moment in time and those exact conditions (temperature, flow, time of year etc) will never be replicated. I know I’ve touched on the many variables in fishing before and I still think it’s a fascinating subject so I may revisit the subject for another post.

After five matches and dropping the worst result, the Warehouse League is beginning to take shape and currently looks like this,

With two matches to go, Andy is still out in front with a two point cushion but things are tightening up in the chasing pack.

Next week I have a Xmas Fayre bonanza with Todber Manor on Saturday and the Chris Patten Xmas Fayre on the Sunday and I’m really looking forward to both matches.

Next up – Todber Manor Xmas Match