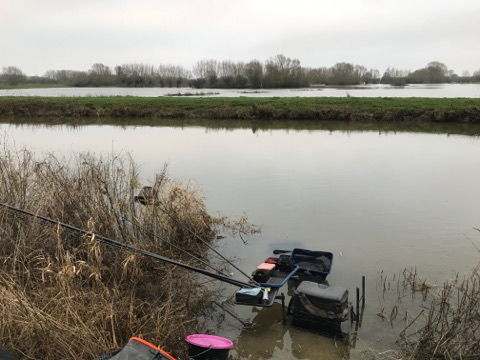 Day three of my fishing trilogy arrived (along with another 5:30 alarm!) and I have to admit I was starting to flag a little bit! It had been touch or go whether this match was going to go ahead, the river had been in the fields but was fining down nicely until Saturday when there were some pumping shenanigans and it rose three foot! The draw was in the Langport Arms which was a blast from the past as I hadn’t been in there since the teams of five some 13 years ago!

There were a few already there, including Dan Squire, Matt Parsons and Dave Pope and while I enjoyed breakfast (which was really good), more people started arriving and it was great to see lots of anglers I see regularly and also people I haven’t seen for years. Hoffy was there, Derek and Mike Goad from Stoke, Mark Vigar and Dean Stacey from Langport, Steve Lovell, Freddie Roberts (who was hoping to catch another bream like yesterday), Tony Goodland, Paul Purchase, Vic Bush, Danny Blunn, Ian Parsons had even come out of semi retirement to fish, Steve Maynard and Robert Fuller made the long trip up from Cornwall and even Preston Innovations superstar Andy Power was there. There had been 30 anglers booked in but a few dropped out (probably because the river was so high) and in the end 23 fished, which is still a decent match and there was a real buzz about it.

Matt announced the draw and we all delved in and grabbed a golf ball, mine had the number 30 on it which meant I was behind the bungalows, so not very far to go then! The river was a lot higher than I was expecting, although as I walked to my peg there were several swims with trees creating a nice slack and fish topping but as soon as I got to mine I knew I was in trouble. No tree, no slack and the river was raging through, I had to sit in the water and the heaviest rig I had in my box was a woefully under gunned 2 grams, I had no choice but to set it up but it was next to useless. In the morning I had chucked my little feeder case in my bag, almost as an afterthought, so I stuck a 30 gram Guru feeder on a pole rig and it just looked all wrong (I’ve never fished a pole feeder before!) although at least it would hold in the flow. 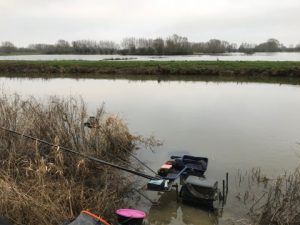 Just a drop of water about!

I had a fair bit of bait with me, three pints of red maggots, two pints of hemp and a pint of casters plus two kilos of Bait-Tech Pro Natural Extra and Pro Natural Dark. On the whistle I baited up with two red maggots and lowered the rig in before balling it with eight big jaffas containing plenty of maggots, casters and hemp. I lifted the rig up and there was a small roach on! Next chuck, I had a sharp rap on the pole tip and a slightly better 2oz roach was in the net, this pole feeder malarkey was easy!

Over the next hour, I had another three roach although I was missing a few bites but at least I was putting something in the net, hour two was similar and I added a few more roach and a little perch but did drop one off and lost a couple in the strong flow with the feeder bouncing about. The river was dropping fast although that seemed to coincide with more crap being washed down the river and my bites drying up. My footplate which had been a underwater at the start was now dry!

A couple of bank walkers had said it was hard for everyone with just odd little roach being caught so I stuck at and added a couple more roach and a tiny skimmer but I also lost a couple more small fish. Matt Parsons walked up and said Andy Power was admitting to 3-4lb which was the best he’d heard and while he was with me I hooked a slightly better roach which of course came off at the net!

Going into the last hour, I was getting the odd rap on the pole tip and added a couple of better roach but I just hadn’t got it right today and when the all out was called I wasn’t too upset. I thought my 16 fish (all roach apart from a perch and a skimmer) would go around 1.5lb which I knew wouldn’t be any good today. Matt and Scott Russell (who had turned up for a walk and got roped into helping with the weigh in!) arrived with the scales and I weighed 1kg. Robert Fuller on the next peg had done really well and got his head down for the bleak and weighed 2kg 360g, Andy Power then put a brilliant 3kg 250g on the scales which included some quality roach. He’d fished a 8 metre whip with a 8 gram flat float (although he said 10 grams would have been better!), he is just a class act. Thanks to Dan Squire for the photos* 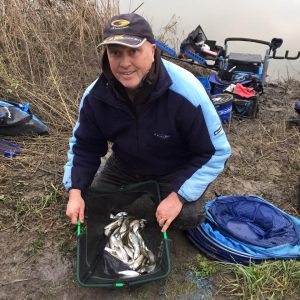 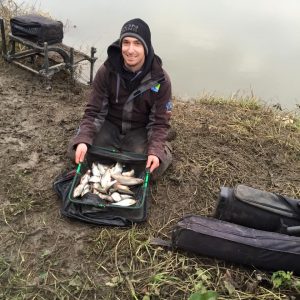 Another win for Andy Power, this time with 3kg 250g of roach*

Derek Goad had 1kg 450g, Si Greening on 26 had 1kg 300g, Dan had 780g and then Mike Goad had a nice skimmer and some small fish for 1kg 900g although he lost a bream which was costly and Steve Maynard had 1kg 850g. The next section had fished even harder with Tony Goodland winning the section with 2kg 010g followed by Paul Purchase with 1kg 040g. The section at Stuckeys fished a bit better with Dave Pope finishing second overall with 3kg 030g from peg 1, Dean Stacey took third spot with 2kg 730g and Dick Bull had the default section money with 1kg 600g. 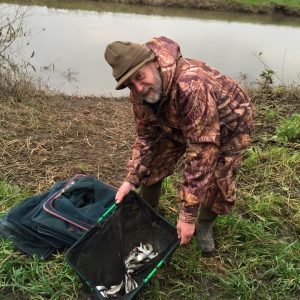 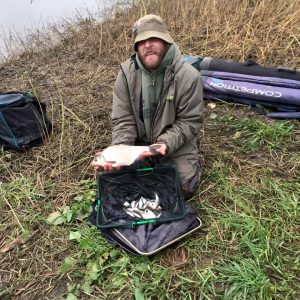 Mike Goad was second in the section with 1kg 900g* 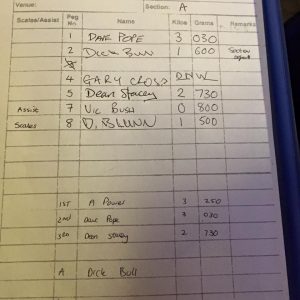 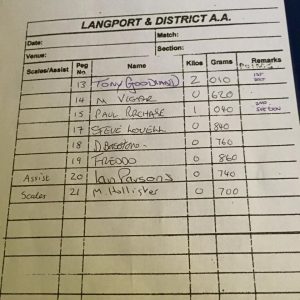 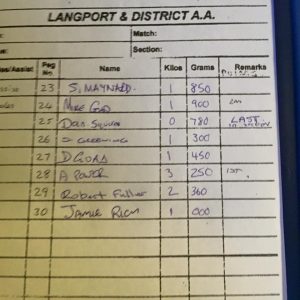 So a disappointing day really as my peg was worth a lot more but I just didn’t really have the kit required and was beaten before I started but it was an excellently run match by Dan Squire and Matt Parsons and I hope they arrange some more opens as it’s a great venue with good access, no mega long walks and a place to draw which does really good breakfasts. In this commercial obsessed age, wouldn’t it be great if there was an open circuit for natural venues like the good old days, you’ve got the Parrett, Tone, Brue, KSD and Huntspill, never going to happen though.

Well that’s if from me as far as 2019 is concerned, it’s probably been my best ever year with regards to fishing, it was a bit of a shame it ended with a damp squib rather than fireworks but I’m looking forward to 2020 and have got lots planned so thanks for all your support and please keep reading, Happy New Year and Tight Lines. Keep an eye out for my yearly review coming in the next couple of days.