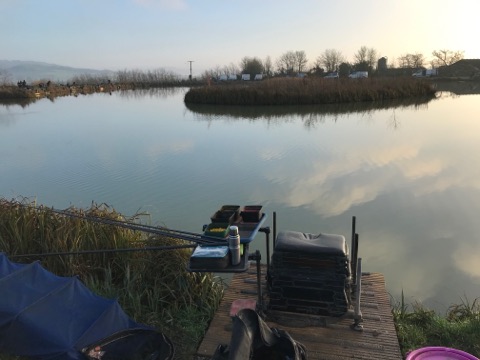 For day two of my fishing triathlon I was back at Todber and hoping for a better day than the 10lb I had in the Xmas match. After another rude awakening from the alarm at 5:30, I loaded the car in the dark before heading to Cartgate for breakfast and then down to deepest, darkest Dorset. Pulling into the car park, there were already quite a few people there and along with the usual suspects, it was nice to have a chat with Freddy Roberts and James Cooper who I haven’t seen for ages. I popped to the shop and picked up two pints of red maggots and a pint of casters for tomorrow before paying my pools and having a coffee. Then the draw was announced and the usual scrum ensued, I grabbed a ticket and I was really hoping to be on Homeground but when I looked I was disappointed to see Hill View 61 staring back at me. It’s a peg you don’t hear too much about and asking a few people, the general consensus was that it wasn’t very good!

The lake was flat calm but there were a few fish moving and I couldn’t believe what a lovely day it was, the sun was out and it was more like spring then the depths of winter! I set up two Drennan 0.4 gram Carp 1’s, one for top two plus two and the other for two lines at 13 metres, straight out and angled to the right. Lastly I set up a 0.3 gram Drennan Margin Crystal for fishing down the edge about a metre off the bank but never used it. On the side tray, I had red maggots (dead and alive), corn, micros and some Bait-Tech Special G Dark. 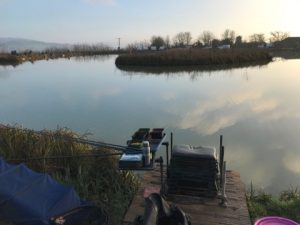 On the whistle, I fed a ball of groundbait on the short line, followed by one at 13 metres and then some micros and corn on the other long line. Before I’d even finished feeding, the lad next door on peg 60 (which is a really good feeder peg) was into his first fish! I had a quick go on the short line with double dead red maggot but after ten minutes with no indications and peg 60 already on several carp, I was soon out on the longer line and thought it wouldn’t be long before I was into my first carp and hopefully some silvers.

After half an hour I still hadn’t had a bite while peg 60 was flying and odd fish were being caught to his left, I tried the other 13 metre line and had another look short but still nothing and I didn’t know what to do next. Finally after an hour and a quarter, the float went under and I carefully shipped back before netting a 3oz skimmer to get off the mark. Next put in I had a small roach followed by a carassio and I was starting to get a few bites although I wasn’t bagging. The chap on my right was also getting the odd fish on the feeder but then the pegs around from him all looked to be struggling.

Over the next hour and a half or so I added some more carp and carassio along with a nice skimmer of a pound and a couple of smaller ones and thought I might still be able to put a few silvers together but then the bites just stopped! I tried resting that line by coming in on the shorter line but still no indications there. Peg 60 had slowed up a bit but he did have two carp in two chucks for 20lb! The angler on his left was also catching quite well on the pole and after a slow start the lad on peg 48 was now catching regularly.

Back on the longer line I had a carp straight away but it was a one off and the only bites I could get were from small roach. Going into the last 45 minutes I was fishing the short line and loose feeding a few maggots and I had my first bite there, which of course I missed. Next put in, the float sailed away and I was into a decent fish but not for long as the hook pulled out and one of the maggots had gone over the point of the hook which about summed up my day! I still thought I might get a few in the last half an hour but that was the last of the action. My final tally of 11 carp/carassio, 4 skimmers and a few roach wouldn’t be winning any prizes today.

As always it’s a very slick operation at Todber and the scales arrived in no time, my carp net went a level 20lb and my silvers weighed 2lb 12oz so not a great day for me although I wasn’t alone as several anglers had packed up early on Hill View and a few had chucked back on Ash lake behind me. I might have had a few more fish on the feeder but I need to put some practice in before I start chucking heavy weights around the place, it could be carnage!

Back at the results, there had been some excellent weights although the silvers was won with just 9lb 10oz, with most of the silvers weights coming from Ash. Photos courtesy of Todber Manor* 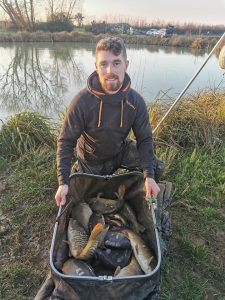 Chris Rust had the top weight with 120lb 6oz from Ash* 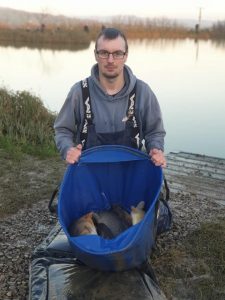 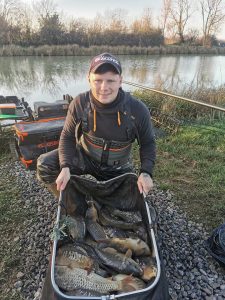 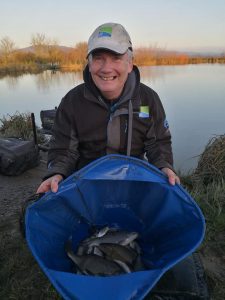 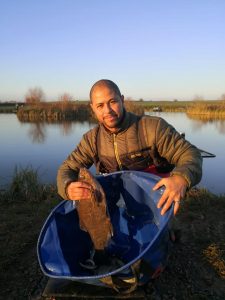