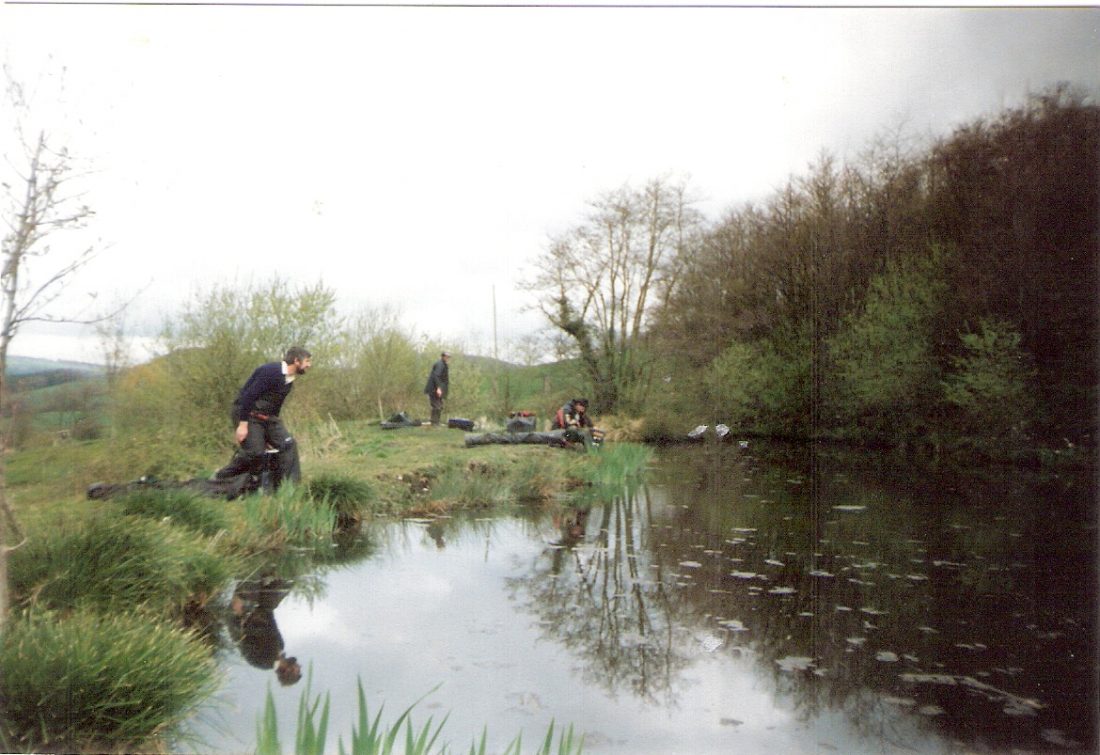 This year, my birthday in May fell on a Sunday and I was at Howley which was probably my favourite venue at the time. I drew peg 7 which I was happy with but the pond has fished quite hard, I managed two carp plus skimmers and roach for 10lb 12oz and a birthday win! The following Sunday we were back again, I drew the same peg and had the same result! This time with 8lb 3oz which included some nice skimmers, two 1lb+ perch and roach but no carp. Andy Langdon was second from peg 4. 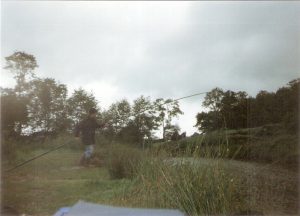 I haven’t got many photos of Howley but found this one from a rare pleasure day of me with a carp on (note the great playing technique with the pole!)

While looking through my old photos I also found one from the top pond at Howley, it was a tiny little pond with a few pegs on it and was occasionally used in matches as a kind of overflow pond. I only ever fished it a few times but it held lots of quality silvers, (skimmers, tench, roach, rudd, perch and crucians). I would love to go back now and see what both ponds are like twenty years on. 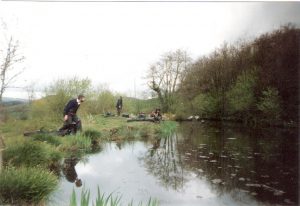 The top pond at Howley with (from left to right), Les, Butch and Bish

The next round of the pairs saw me on peg 12 in the Perry high section and I lost a good fish first chuck (skimmer or tench) which set the scene for the day and I weighed 3lb 1oz for last in the section. Andy Saunders did better, coming back with 7 points but it was already obvious we wouldn’t be repeating our success from a few years earlier. Peg 6 for the next one and a few eels plus a decent skimmer for 4lb 3oz and another poor score of 4 points and Andy S came back with 2 points from Sadborow.

For the final round I was at Sadborow on peg 3, I started off well with three carp and a skimmer but then I was getting indications I couldn’t hit and everyone overtook me. I weighed 8lb 12oz for a lowly three points, Bob Gullick won the section with 32lb and Pete Sivell was second with 24lb. In the league Rixon and Sivell jointly won it again to keep up their incredible record.

After a few practices on the K & A canal for the Drennan league, I was in the team, we didn’t draw very well and I had a long walk, I was getting the odd small skimmer and roach but couldn’t catch on my chopped worm line and weighed 2lb 1.5oz for 3 points, the team struggled and we came eighth on the day, Dino had a nice day though as he won the match with 18lb.

The next league match was on the ‘Spill and I had a roach and a ruffe on the feeder and then a couple of eels and a few small fish on the pole for 1lb 8oz and last in the section, team wise it had also been a struggle and we finished seventh on the day. Another round on the Bristol Avon and I drew H2 which was down a really steep bank, our team plan was to ball it in at the start. I had a fish first chuck and caught well with 29 fish (roach, little skimmers, hybrids and perch) but then the bites just virtually stopped and I weighed 2lb 14oz for 3 points. To be honest I really struggled and just didn’t have a plan B!

Chard and Ilminster’s river matches kicked off in October but looking through my records, my drawing arm was playing up and even when I was on a half decent peg, I wasn’t making a very good job of it! In the Ilminster Xmas Fayre I pulled out peg 20 (known as ‘The Elderberry Swim’) which wasn’t a brilliant peg even back then but with the river up and coloured, it had a decent slack and I started catching quite well. I ended up with 20 fish (roach, dace and chublets) for 4lb 14oz and third place which meant I took home £30, a turkey and a bottle of wine but I’d lost and bumped several fish along with spending ages having to set up a new rig after snapping a float (poor prep) which was costly as 4lb 15oz was second!

The last match of the year was Chard’s Xmas match at Perry St, it was very cold and really hard going, I drew peg 6 and managed 10 small fish for 15oz but lost a decent skimmer and missed a few bites with only 1.5lb winning the section! Dave Lawrence had the top weight on the pond with 7lb. We had a lovely meal back at the Cotley before the prize giving, I picked up a crate of lager, a box of chocolates and won a bottle of whiskey on the raffle.