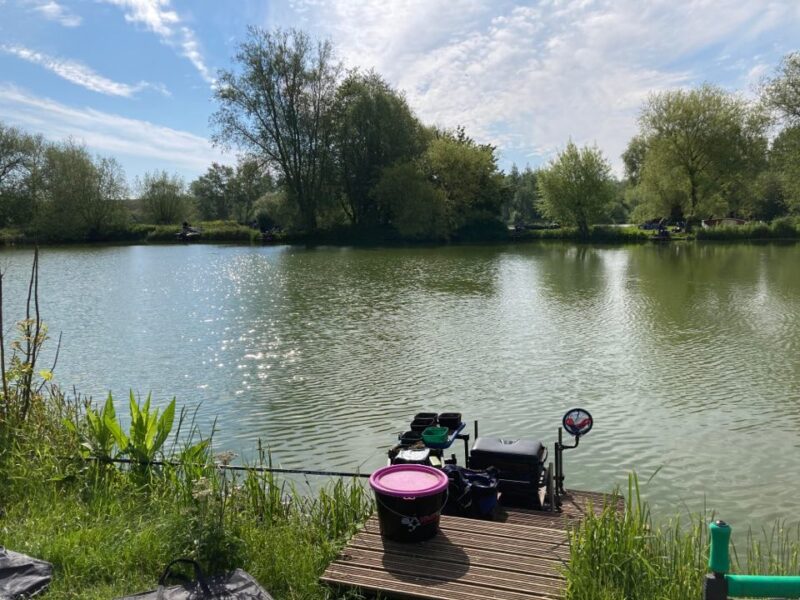 I booked into the Stoke match at the Viaduct and looking through the blog, I haven’t fished it since 2013! It was on Campbell which has been producing some cracking weights of silvers so hopefully we’d be in for a good day. Drew very kindly agreed to let us have breakfast at the bowling club and it was bloody fantastic, after we’d all fuelled up for the day we headed to Somerton. There was a rolling draw in progress and I actually had the last peg in the bucket which was 126. It obviously meant nothing to me but Chanter said it was a decent area for silvers so that would do me.

Elsewhere, Andy Downton had drawn fancied peg 135, The Toast was in carpy corner 132 with Andy Saunders next door, Parker The Pole was on 110 and despite wanting to fish for silvers, got persuaded to fish for carp. I had Julie on my right and Lee Tucker on the other side and we seem to end up next to each other every match. I’d spoken to a few people leading up to the match and the general consensus was that I would need to fish a few swims, short and long. 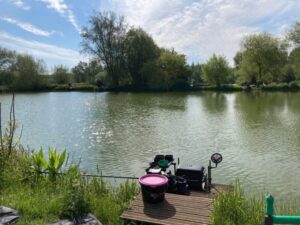 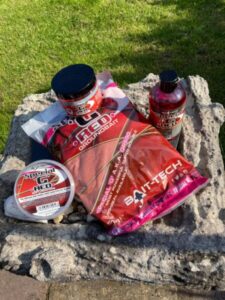 Special G Red, a great addition to the range

I was ready in good time so I went up for a natter with Terry and Andy, there were carp everywhere and both their pegs looked like there had been an explosion in a tackle factory! With a few minutes to go I wandered back and applied some sun cream (nobody else would do it for me!) as it was set to be a scorching day. 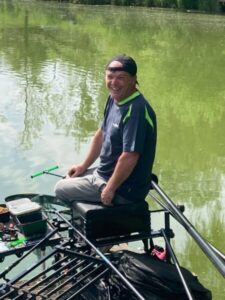 Terry ‘The Toast’ is down with the kids!

On the whistle I cupped in a ball of groundbait on both the right hand lines and then micros on the other two before starting over the short gb line with double dead red maggot on the hook. I had a roach straight away and a couple more followed so I put an expander on and tried the short micros line, a couple of missed bites and then I had my first decent skimmer around 8-10oz. A spell of missed bites made me think it was small fish so I went on the longer line and it was the same there. Treble dead red maggot was better and I started to get a some nice skimmers over the longer gb line.

Lee was also catching skimmers quite well and from what I could see, there was the odd carp coming out round the pond with lots of shouts of ‘Well done *insert name here*’, at times it was like something out of The Waltons! (younger readers will need to Google that). I was catching most my fish from the longer gb line, trying the long micros line was just producing odd fish and I couldn’t get a bite on either of the short lines.

After an hour, bites slowed up so I tried a worm head which resulted in a run of good fish, I fed another ball of groundbait and then switched to the micros line, again with worm on the hook and had brilliant spell with some fish nailing the bait on the drop. With two hours gone I was still catching pretty well and even better, not too much carp trouble with just a couple of foul hookers that were only on briefly. As we reached the halfway point, I had 25 skimmers plus some roach and thought I must have 25-30lb maybe a bit more so I started a second net just to make sure I wouldn’t go over the limit of 50lb.

There were loads of lumpy carp cruising about and they were starting to have a munch so I knew it was only a matter of time before I hooked one. The Grand Wizard opposite me was starting to catch some big carp (Well done Chris!) and young Sam two pegs down on our side was hitting some beasts but was getting beaten up and losing some kit (good job he works in a tackle shop). I was still getting odd skimmers with several leapers and Lee was experiencing some acrobatics too. Julie was catching quite a few silvers from her short line including some nice roach and rudd and Chanter next door was struggling early on with just one carp so far.

Although it was close between Lee and me I thought I was a few fish ahead but he was now catching quite well while I was only getting odd fish and then I’ve hooked a lump which led me a merry dance and it probably took me half an hour to land a rather large common carp of well over 10lb. While I was playing it, Lee had a couple more skimmers to narrow the gap further and his swim appeared to be getting stronger while mine was fading.

Chanter started to catch quite well (Well done Steve!), Sam was still doing battle with several Moby Dick sized fish (Well done Sam!) and John Simms opposite was getting a few now (Well done John!). There was elastic out all over the lake (Well done Chris Norton and Marco Smith!) as the carp got their heads down. I hooked another large carp only for the hook to pull out after a lengthy battle while Lee continued to catch steadily and overtook me (Well done Lee!).

After catching 25 skimmers in the first half of the match I was now struggling and just to add to my woes, I hooked another submarine that took forever to get in on light elastic, the carp obviously had spawning on their minds as when I landed it, another nearly followed it into the net! Lee finally hooked a carp but at 5lb it didn’t give him too many problems. I was now waiting ages for bites and then hooked a skimmer only for it to come off and then with minutes to go, the float sailed away and I hooked another nice one but as I went to ship back, that came off as well! I ended up with 35 skimmers plus some roach which thought would probably go 35-40lb but I didn’t think it would be enough to beat Lee.

As we were packing up, Steve Long started the weigh in on the far side, when he got round to us, the Grand Wizard was winning with an excellent 139lb 1oz and Chris Norton was leading the silvers with 31lb 7oz. First to weigh on our bank was Andy ‘two hats’ on 123 who had 45lb 8oz, Sam Hinton weighed 55lb 12oz and then Lee’s two silvers nets went 41lb 5oz. Then it was my turn, my two carp weighed 21lb 3oz and then I pulled out my second silvers net which went 11lb odd and I still thought it might be close but my other net only went 22lb something to give me 33lb 13oz which was still a nice days silvers fishing. 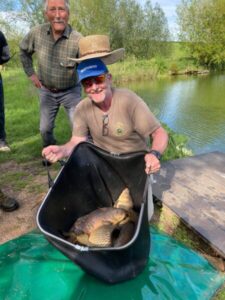 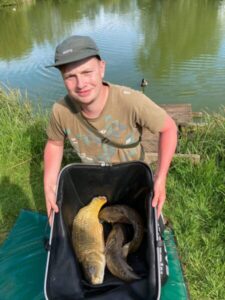 Sam weighed 55lb 12oz (and would need some aftersun when he got home!) 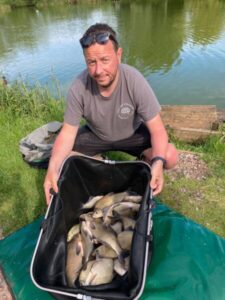 Lee had a great net of skimmers for 41lb 5oz 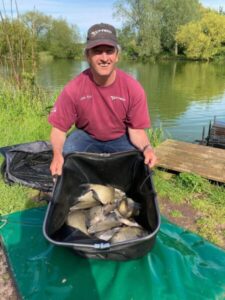 Julie had 11lb 7oz of silvers, then Chanter weighed 93lb 5oz which he basically had in two hours, Jake B had 81lb 8oz on 129 and Rob weighed 62lb 5oz to take a nugget off me. Andy S had 111lb on 131 and then The Toast had done well and weighed 135lb 1oz which put him second for now but apparently Andy Downton had sacked up in 135. After multiple weighs, Andy’s total was 196lb 6oz to win on the day (Well done Andy!). 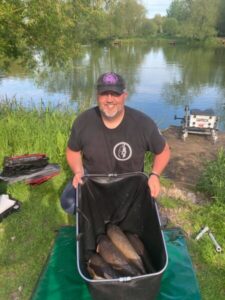 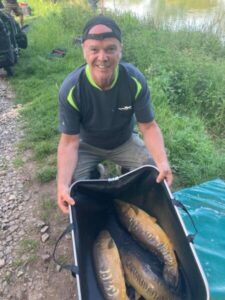 Terry ‘The Toast’ had 135lb 1oz for third place 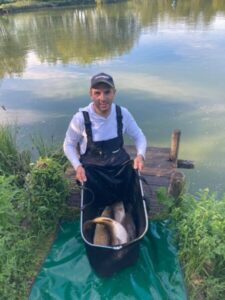 Check Out – My latest news (below)