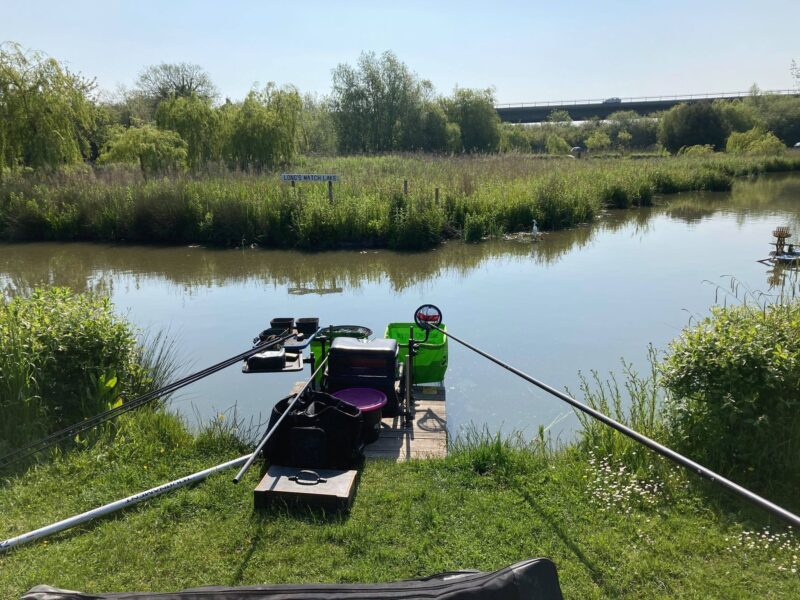 Another Bank Holiday means another match at Summerhayes and what a difference compared to the last one when the weather was bloody awful and the carnage caused by the wind resulted in Captain Morgan’s pole ending up in the pond and he had to launch the boat to retrieve it. The thirty or so minutes that followed were possibly the funniest I have ever witnessed but everything turned out okay as he got his pole back intact and didn’t capsize the boat (shame!).

The Breakfast Club assembled at the Brewers Fayre in Taunton (thanks to Terry for organising) and I have to say it was very good, the service was excellent and I’d definitely go there again. Then on to Bridgy, I knew the Tart was fishing today as he’d also fished it the previous day when it had been very difficult due to the fish spawning, the silvers was won by Jess with a single eel of 3lb! There weren’t as many carp crashing about so hopefully they’d finished their business and it would fish a bit better today.

Pete announced the draw and as always on a Bank Holiday, the payout is split equally between carp and silvers with the top two in each picking up. I got drawn peg 37 which I was fairly happy with, it can be good for silvers and I had a lovely day the last time I was on it, Terry was on 32, Nick was down on 19 and The Tart ended up on 15 which is a great peg and we had our usual double nugget, one each on silvers and carp.

As I put my box down on the pallet, there were carp on the top in the edge and I hoped it wasn’t going to be ‘one of those days!’. Rigs were the same as yesterday and I plumbed up three lines for the top two (left, middle and right), 9 metres towards the point straight out and then 10 metres to the left in the middle. 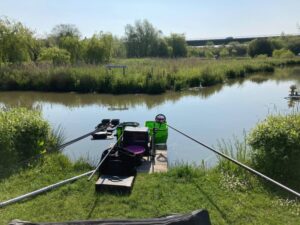 It was another glorious day

On the whistle, I fed a ball of groundbait on the short lines in front and to the right and some micros to the left, the 10 metre line received a ball of gb and I decided to not feed the 9 metre swim until I went on it. There was quite a bit of the dreaded white fluff about so I carefully lowered in two dead reds on the right and the float just kept going as a carp took off at a rate of knots, not the start I wanted! That one came off but when the next bite resulted in a 4lb carp, that was enough of that.

The central line was my next stop and I finally opened my silvers account with a couple of small skimmers, then things got even better when I had a decent one of 8oz or so. Rob Birch was on peg 1 and landed a decent skimmer so already it was looking like being an improvement on yesterday. Mark Leahy was on 35 which was also the golden peg today and he’d got off to a steady start with a couple of carp.

I added a few small fish and a second decent skimmer, which came on the drop from the central line, a quick go on the top two to the left was fruitless. Another ball of gb was potted in at 10 metres and I went back to catching the odd small fish in front of me, I did bump a slightly better skimmer and had several little fish drop off as I swung them in. Rob lost a better skimmer and there was nothing between us.

Around the half way mark, I had those two better skimmers, some smaller fish and a couple of carp. The Tart wandered up to buy a drink from the fridge and brought over a can of Lilt and a bar of chocolate for me (bless him, I always knew there was a nice person in there somewhere!). I asked how he was doing and he said he’d clicked 45lb so he was doing ok and he reported that Roy Hughes on 13 was catching silvers well on the waggler.

I had a quick look on my 9 metre line, just toss potting in some maggots but never had a bite there so went to 10 metres for the first time and that was equally non-inspiring. Then I noticed Rob strike into a fish and by the way he was shipping back carefully, it was no carp and he safely netted a nice skimmer to go ahead of me. Back on my top two line, I had a little run of small skimmers and roach but was missing loads of bites from tiny fish.

Then out of the blue I had another nice skimmer and was back in the game as I felt I needed to beat Rob to stand any chance of a pick up today. The only bites I could get were on the drop so I spread the Stotz out on the rig and  decided to keep putting the odd small fish in the net and hopefully I might pick up a couple more skimmers as well. I was still missing loads of bites and bumping fish but I did manage another skimmer and a chunky roach but Rob landed another decent skimmer and it really would be very close between us.

Pete blew for the all out and I had 33 silvers (4 better skimmers for around 2lb and 29 small fish for probably the same weight) plus two carp which wouldn’t be winning me any prizes. The scales started with me and my carp went 8lb 4oz before my silvers weighed 4lb 11oz. Rob was adamant he hadn’t got that and I was sure it was going to be close, he was next and his single carp weighed 3lb 8oz and then he pulled his silvers net out and it was close, very close, Pete called it at 4lb 12oz – bugger! 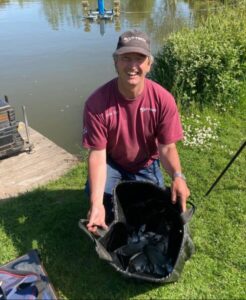 Lewis on peg 8 had 56lb 7oz of carp, Jess ‘Zooner’ Jordon weighed 3lb 3oz of silvers on peg 11 and then Roy once again put a brilliant 11lb 2oz on the scales for a comfortable silvers win, he really has got it sorted at the moment, fair play mate. The Tart was admitting to 75lb but was also saying the silvers might be close and that would finish the day off nicely for me if I had to give him a double nugget. Luckily his silvers went 4lb 8oz and I cheered very loudly (I’ll take any little victory I can get at the moment!) before his two carp nets weighed 82lb 7oz, an excellent weight on the day. 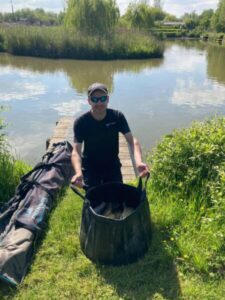 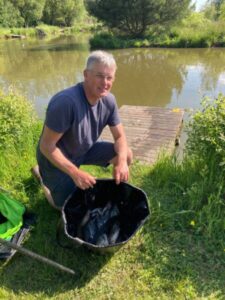 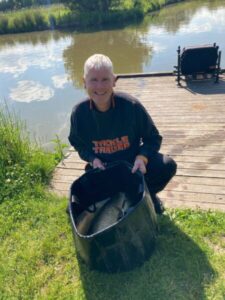 Nick P on peg 19 had 49lb 12oz of carp and had caught the sun quite badly which would be sore later, The Toast had suffered a frustrating day and chucked back and then Mark weighed 67lb 11oz to secure second spot in the carp pool. 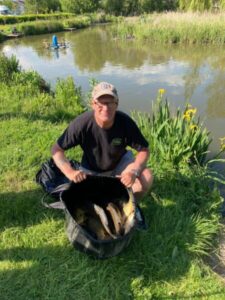 So a disappointing and frustrating couple of days really, I enjoyed the Viaduct but I went from doing well to struggling as my bites faded and didn’t really know what to do about it. Then today, missing out by an ounce is always annoying but sometimes it goes in your favour instead and I think people tend to forget that.

I’ve booked into the Stoke match at Thorney next week and although I have pleasure fished it many years ago, I’ve never fished a match there. I’m not really sure what to expect as I’ve seen some nice catches recently on Facebook but pleasure fishing is a very different game compared to the pressure of a competition. Whatever happens I’m sure we’ll have a laugh and I do enjoy trying doing something a bit different.

I must admit I was feeling quite down about things, not just fishing as I’d had raging toothache most of the weekend, the kind that woke me up sweating in the middle of the night and people who know me well, know how scared I am of dentists. Anyway I received some lovely feedback about the blog in a message and it made my day, thank you!

Next up – Thorney Lakes