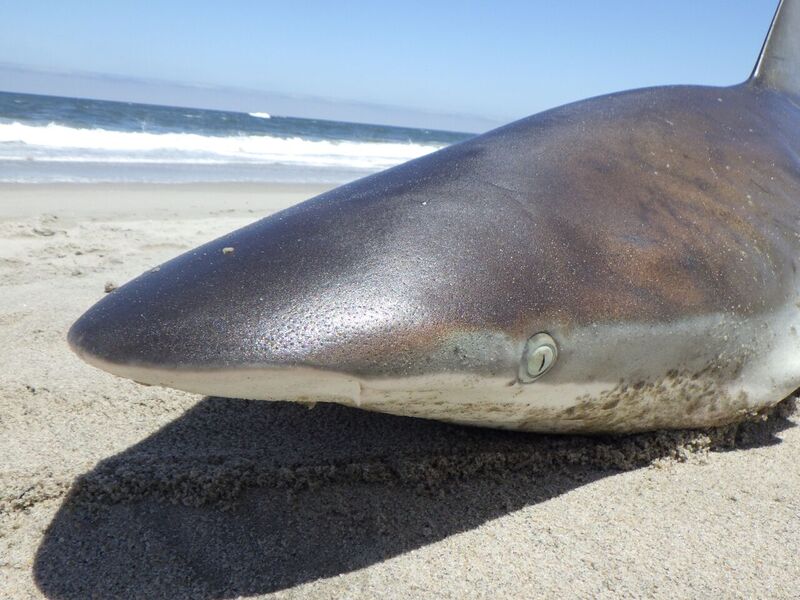 My latest guest post is David Rigden’s excellent account of his recent trip to Namibia fishing for bronze whaler sharks. 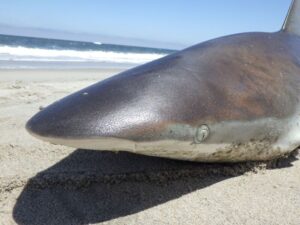 I stepped off the plane at Cork Airport, still two hours to drive home, feeling like I needed a fortnight’s holiday …

In fact the holiday was over; it had been enjoyable, but tiring. Two weeks earlier I’d set off on my seventh and probably last fishing adventure to Namibia’s Skeleton Coast, the primary target of course being the wonderful bronze whaler sharks that hunt those shores. I was there with friends from UK, Dave Matthews and Stu Read with our regular guide Johan Burger who is the absolutely the best of the guides operating on the coast there. Dave was fishing for seven days before heading off with his partner Jane on a safari tour led by Johan’s wife Joyce; Stu and I had another three days fishing with Johan before travelling home.

I flew with Aer Lingus to Heathrow where I met Stu, Dave and Jane for an overnight flight to Johannesburg with Virgin Atlantic. From Jo’burg we took a flight with South African Express on to Walvis Bay and were met by Joyce for the drive of ninety minutes or so north to our very comfortable rented accommodation in Henties Bay. The travel all worked fine, both ways, but it’s quite gruelling especially if, like me, you don’t sleep well on planes.

The fishing days fell into a pattern: breakfast, bait fishing in the morning, picnic lunch, bronzie fishing in the afternoons and on into the evening, home for a quick shower then out for an evening meal before collapsing into bed. Eating out is cheap in Namibia – you’d struggle to spend any more than the equivalent of €20 on a meal and that includes drinks. We used the restaurant at De Duine Hotel (nice but very slow) and Fishy Corner (nice and not as slow); other restaurants are available in Henties. 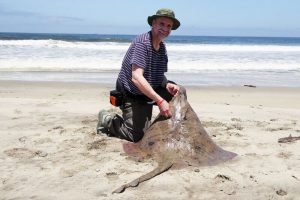 Spear-nosed skate – it apparently took a small spurdog, just visible right, that had taken my bait

For the bait fishing you could use the heavy end of the spectrum of UK beachcasters, though we used Johan’s gear which is a bit beyond that. You can pick up some big fish on the small mackerel and mullet baits, including sometimes a stray bronzie. This time out I had a spear-nosed skate estimated at nearly 60lbs, and a big spotted gulley shark nearly 50lbs both of which pulled like trains.

Smaller gulley sharks would be one of the intended targets of the bait fishing: their gills and livers make good bronzie baits, with the carcass being staked out in the surf as chum. This trip though they proved scarce but there was a good showing of smooth-hounds which did the job for us along with some sand sharks frozen down from Johan’s previous clients, err … Nigel Farage and his sons. Thanks for that Nigel (but for nothing else.) 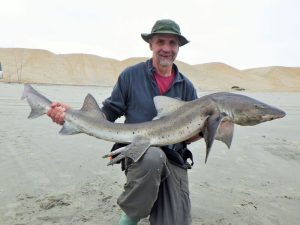 I wouldn’t say butchering smooth-hounds to use as bait is the most endearing aspect of Namibian fishing … all I can say is it’s a different world out there!

Other fish that came along on the small baits this trip were the ubiquitous barbel catfish, nasty spiny little things which aren’t much good for anything except gulley shark bait; baby spurdogs, locally called green eyed sharks; and an elephant fish, locally called a St Joseph fish, for Dave.

And so on to the bronzie fishing. Johan has some more powerful and slightly shorter rods for the big sharks coupled with multiplier reels taking roughly a kilometre of line starting with heavy nylon going down to braid backing. 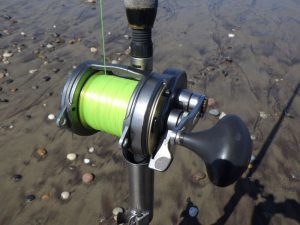 At some marks Johan casts an 8oz grip lead and a bait weighing about the same again off these huge reels some quite remarkable distances, and even more so in that he barely ever gets a significant over-run.

The latest thing on the Namibian beach scene is the use of drones to carry the shark baits out – it seems like everyone’s doing it, including Johan. There’s no doubt that it catches bronzies that wouldn’t otherwise see the beach by enabling the bait to be dropped further out, perhaps beyond a bank that the fish won’t cross on some days or in some conditions. It brings its own challenges though by exaggerating a number of potential problems. There’s a lot more line in the water potentially subject to side-wash, picking up weed or getting bitten by sharks swimming inshore of the bait. It’s a bit of a faff setting up the drone and carrying three baits out one at a time, with a consequence that there may be a slight temptation to leave the baits out longer and past their best. If you’re not getting pick-ups there’s a nagging doubt the bronzies may be closer in, particularly if there’s chum in the surf. And as I watched in dismay my reel emptying down to the last few metres of braid backing as a large bronzie headed for Argentina, I was wondering about the wisdom of giving it a 200m head start! Perhaps fortunately that fish cut the leader on a reef just as Johan thought it might be stopping; I wasn’t so sure about that. 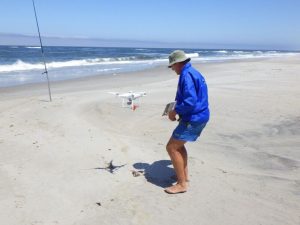 Johan and his drone

Anyway … the baits are out one way or another, and the wait begins, maybe a few minutes, maybe much longer. Dave stands holding his rod poised for action and no doubt this is the best technique. I used to fish that way but my recently dodgy back dictated a more leisurely approach – my rod went into a sand spike after ten minutes or so and I watched from the comfort of a folding chair. Johan found me a stand-up harness which certainly helped to protect my back versus the standard butt pad – it spread the load when playing a shark and also with the lever drag reel clipped to the harness I could lean back and have a bit of a breather during an extended fight. Johan had recently used it to help bring a 1000lb+ marlin to a small boat off Angola, so it ought to be up to the job! 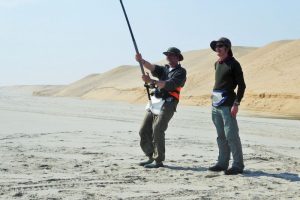 Stand up harness, saving my back

The typical bronzie take is a bump or two followed by line pulling off from the lightly set drag; but the rod may just pull over without warning, or the line may drop slack as a shark picks up the bait and swims inshore. We were using big circle hooks so once the fish was taking line well it was just a case of tightening the drag to its fighting setting and jigging the rod to make sure the hook was in – no striking as such.

Most of the bronzies we had were 150 – 200lbs and fish of this size typically will make several strong runs, especially the male fish that seem to surge faster through the water than the females. It might take 30 – 40 minutes to get an average sized bronzie into the surf for Johan to catch the leader and steer it ashore before finally grabbing it by the tail, turning it and dragging it up the beach to be unhooked, photographed and returned. 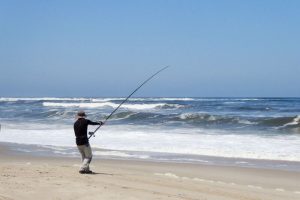 Dave’s into a bronzie 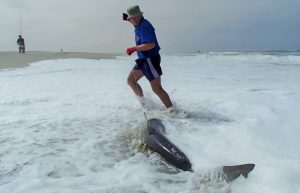 Johan bringing in another

The fishing was certainly not at its best while we were there, and most days we did a good bit of driving up and down the coast in Johan’s 4×4 to find spots where the bronzies might be inshore and feeding. Finding the right combination of water colour and temperature in spots with the right depth and tidal flow is crucial. Johan is masterful in this respect but not even he can do much about it when mark after mark is full of weed, all you can do is move on to the next spot. So, challenging fishing, but to Johan’s credit we had pick-ups every day and we managed to land bronzies on every day but two. My total for the ten days fishing was eleven bronzies.

Incredibly I think I only missed one pick-up, on the first evening, though I went through a dodgy spell of losing hooked fish mid-trip. One picked up a huge piece of kelp on the line that eventually caused a break; another fight was ended abruptly when the line was bitten by another shark; there was that fish that nearly spooled me and one that felt nearly as strong that steamed off diagonally right and over a reef, cutting the line again.

The very next day at the same spot I had an almost repeat performance but although the shark spent several minutes swimming over the reef, this time it didn’t manage to catch the line on the mussel-covered rocks and eventually I got it moving back towards me. After an hour and ten minutes I had a new PB estimated at 308lbs on the beach. I felt drained, as much emotionally by the protracted period of expectation of losing the fish as physically. 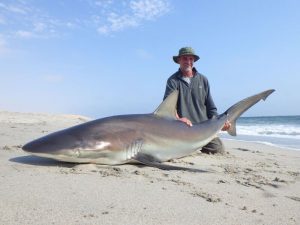 Dave and Stu didn’t fare quite as well, getting more than their fair share of missed pick-ups, bite-offs and fish just coming off for no good reason at all. Dave finished with three bronzies landed; Stu had a couple on each of the last two days to finish with five. 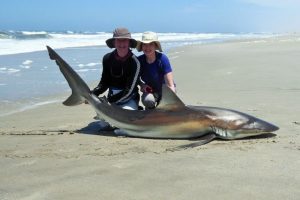 Dave and Jane with a bronzie 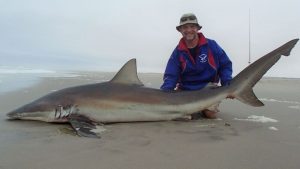 It was a great holiday in great company and I hugely enjoyed reacquainting myself with the bronze sharks. I’d recommend the Namibian fishing experience to anyone who’s reasonably fit but I think this will be my last trip there. Dave accompanied each of his bronzie fights with mutterings of “I’m getting too old for this …” but in my case it was the flights and the driving that I found the more wearisome. Getting my first three hundred pounder seems as good a time as any to bow out.

I booked my flights with the Irish online agency e-travel and they were great in notifying minor changes to the flight schedules etc. It’s worth paying the extra €5 for their post-booking service.
Johan and Joyce can be contacted regards either fishing trips or safari tours through their website of their company Bushworx. Thanks to Dave, Jane and Stu for use of some of their photos.

David also writes a fantastic blog which can be found here https://www.houseonthesheepshead.com/sheep-s-head-fishing-blog/

All photos courtesy of David Rigden