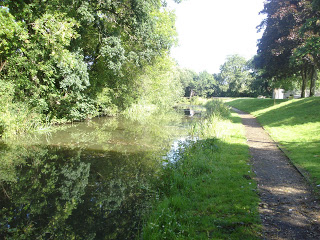 With there not being a lot on this weekend I organised a sweep on Ilminster Canal, six anglers turned up and the weather looked good although some rain was forecast. The canal looked good with lots of fish topping and we found six swims amongst the weed. I drew peg 2 with Robin Cox on the end peg and Ashley Tomkins on my left. Being a lazy twat I only set up one rig, a Drennan Choppa float with Kamazan B611 size 18 and 0.12 mm bottom. On the whistle I cupped in some chopped worm and caster by the reeds at 11 metres and some caster and hemp at the same distance to my right, again against some reeds. First put in the float sailed away and I had a small roach on caster and this was quickly followed by more roach, small skimmers and perch. After the first hour I had 16 fish and was ahead of both Ashley and Rob.

I had also been flicking some maggots and casters on the inside by some weed and tried this after an hour and was soon rewarded with an eel of 4oz or so. Back across and I was still catching roach and skimmers but no real quality as yet. Robin still hadn’t caught much but Ash had caught lots of small fish and was now on his big fish line tight across. The last time we fished here no carp were caught so I wasn’t too concerned. After two hours I had around 30 fish swapping between my two far lines.

Hour three was much slower for me and to make matters worse Robin had landed a couple of small carp. Still if I could find some quality silvers I could still beat him. Then Ashley had a carp and then another! I was still getting odd fish including a good roach and a couple of better perch but was well behind. I kept thinking I should feed a line tight across but did I do it? did I heck! I cupped in some more choppie on my original line and this brought a brief flurry of bites including a 4oz skimmer that I dropped off! Robin Cox (with audience) looking happy whilst whupping my ass!

The weather took a turn for the worst and it was now pissing down, Robin and Ashley were still catching the odd carp although they both lost fish as well. I was struggling and only adding the odd small fish and kept thinking about fishing for carp (without doing it). By all accounts the anglers at the other end were struggling so I kept plugging away thinking I could sneak third place. Some more chopped worm again brought another burst of fish but I just couldn’t hook a bonus fish.

The wind was now hideous and my nemesis Janders suffered a broken pole as a result. John Loder also had his pole smashed but by a dog walker!, the owner stepped over the pole but his German Shepherd went underneath and the lead vapourised his pole! The whistle went for the end and I ended with 50 fish and I knew I’d been well beaten either side but could I still get third? Whilst packing up Janders walked past without weighing so at least my pound was safe. John Loder also didn’t weigh so I just needed to beat Alvin Jones. As he pulled his net out I knew I was done for, he had a carp, a couple of good skimmers plus roach and perch for 7lb 2oz. Ashley had 7 carp plus nearly 7lb of silvers to weigh a brilliant 21lb 7oz, so we’d been mugged again.

I weighed 5lb 9oz and was really regretting not fishing a big fish line, still we live and learn. Robin had 5 small carp plus roach, perch and eels to weigh 8lb 6oz for 2nd place. Considering the conditions the venue had fished well and the majority wanted to fish it again in a couple of weeks. If we do I’ll be better prepared (probably!). Ashley before winning his second match on the trot – well done mate.

Next week we’re back on Dillington but Scotty and Ashley are in Las Vegas so at least the rest of us should stand a chance.