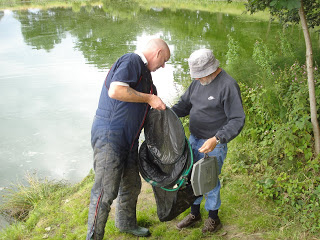 Round five arrived and the forecast was pretty good for this one and I was really up for it. I drew peg 18 which is next to the bush, it’s a good peg although the one the other side of the bush, peg 1, is even better. My peg has been throwing up odd chub but I’ve always felt these type of pegs are a poison chalice here. By that I mean you feel you have to go for the chub and if they show you are a hero and if not you’ve blown out.

I got to my peg and made myself comfortable, I decided to fish a roach line at 11 metres straight out in front and a big fish line to the bush. Because the peg is very deep I set up a one gram Drennan Tipo with 0.12 mm bottom for the roach and a Drennan Carp float with 0.12 mm bottom for the bush (big mistake). Both rigs had Kamasan B611’s size 18’s. I also set up a Drennan Squatt rig for fishing up in the water over the longer line. I mixed up some Sensas Black Lake and PA Megabaits Chocolate Match in equal measures and chopped up some worm and caster.

Alvin Jones from Taunton was the other side of the bush but I couldn’t see him and Martin Heard was next to him. On the whistle I cupped in three balls at 11 metres and a cup of chopped worm and caster by the bush followed by one of hemp and corn. I started on the longer line with caster on the hook and missed a bite before catching a roach. Sport was slower than normal and after an hour I only had six fish, a brief spell on the shallow rig resulted in one tiny rudd. Things were definitely not going to plan and I couldn’t wait to try by the bush. Comments from around the pond made it obvious it was going to be hard yet again, it was time to try my big fish line.

I went in with caster on the hook and after a couple of minutes the float slid away but instead of loads of black hydro streaming out, a small perch came skimming across the water. I slipped on a grain of corn and missed a good bite but at least I was getting indications. Next chuck the float went and this was no small fish, after a short scrap it snapped me under the tree – bugger! I tied on another hook but this time with 0.14 mm bottom and went back out, after half an hour and no bites I re fed it and went back over my roach line.

This was painfully slow and I only added a couple more small fish, back by the bush I had another bite and made no mistakes to land a chub of around a pound and a half. This was more like it and I fully expected sport to now start in earnest. No more bites and I was starting to panic, some ripples from the other side of the bush prompted me to ask how Alvin was getting on. He shouted back that he’d just landed his first chub although he’d lost three! Martin also indicated he was struggling. With half the match gone I only had 11 fish and would be lucky to make two pound.

I kept feeding the bush hoping the chub would move in, swapping to maggot or pieces of worm only resulted in the odd small perch. Alvin was now hooking more chub although he was losing quite a few, I asked what he was catching on and he said double red maggot. With nothing to lose I put two reds on and continued getting the odd tiny stripy, then out of the blue I had a nice roach but it was a loner. With all the worm I had put in I thought the odd eel might put in an appearance but I never saw one all day. I did hook another good fish but the hook pulled out and I just knew I would rue the loss of those two good fish.

I was actually quite relieved when the whistle went and I only had 17 fish and really thought I’d struggle to do two pound. I took half my kit back to the car and went to watch our section being weighed in, Robin Cox put a hard won 3lb 3oz on the scales before I weighed a level 3lb and I prepared myself for a poor section placing. Richard White didn’t weigh so at least I wasn’t last, things got better when Janders only weighed 1lb 1oz and handed over a pound. He’d bought a new pole yesterday but hadn’t really tested it today. Roger Russell was the last peg in my section and he’d caught a chub early and then had five in the last hour to win the section (and the match) with 12lb 2oz – well done Rog. I finished third in my section which wasn’t as bad as I first thought and the better news was that Martin Heard (who I was jointly leading the league with) only had 3lb as well but he was fourth in his section. Justin Charles won the other section and finished second with 6lb 1oz of small fish on the whip. Alvin ended with three chub plus bits for 5lb 11oz and third place. The pond had once again fished poorly and I wouldn’t want to fish my peg again. After five matches and dropping the worst result me and Martin both have 8 points although I’m slightly ahead due to a better back up result. Next week we’re back on the canal for a fiddle so lets hope I do better than last time.