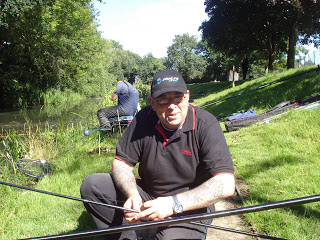 With nothing on once again I organised another fiddle on the canal, this one was better attended with 10 anglers trying their luck. Unlike last time the canal was gin clear and the top few pegs had a nasty covering of scum on the surface. I drew peg 9, one of the pegs in the scum. It’s a consistent peg and picks up money most matches so I was quite pleased with my draw. I had the winner of the last match here on the next peg, Ashley End Peg Tomkins and on my right Roger Russell.

After so many carp had showed last time I was well prepared with 4mm pellets and corn plus the usual caster, worm and maggots. I set up a 0.6 gram Drennan Carp float for fishing down the middle on my chopped worm line with a 0.12mm bottom and size 18 B611 hook. For tight across I had a Drennan Choppie float with 0.14mm bottom and another Kamasan B611 size 18. The former rig had blue hydro and the latter had the black variety.

On the whistle I cupped in some choppie just past the middle at about 8 metres and corn, caster and pellet tight across in two places, straight over and to my right, both at 11 metres. I started over the chopped worm with caster on the hook but after 10 biteless minutes I became distracted by loads of decent roach coming up for the odd floating caster. I went over and the float buried first put in and I had a roach of 2oz. Ash was still setting up and I got to five fish before he started. Along with the roach I was getting the odd small skimmer and perch.

Ash started down the middle with worm on the hook and soon had a couple of better perch to wipe out my early lead. I kept trying my chopped worm line but it was very slow apart from one perch on double red maggot. I then tried half a worm over the same line but no indications at all, I went out in front of me and the float sailed away and I netted a decent perch of 12oz or so which kept me close to Ashley who was getting less fish than me although the ones he was getting were a better stamp. He did lose a clonking roach at the net. Things were definitely slowing up though.

I couldn’t really see what was happening to my right but I didn’t think Roger had caught much. After an hour and a half bites were very hard to come by, Richy wandered up and he’d only had a couple of perch and reported that most people were struggling apart from Martin Heard on the other end peg who’d had three small carp, a small tench and two decent skimmers. Ash tried tight over but only had a couple of indications, I had a quick go with corn on the hook over my far lines but had no bites at all. I fed them again with a view to try again later in the match. I had a couple of small skimmers on maggot but bites were now few and far between, a kingfisher kept darting up through and he seemed to be enjoying more luck then us lot. After two hours, Janders and Scotty were walking about and said they were both struggling as well. Poor Janders was using his new Preston pole but as yet hadn’t tested it with any decent fish. I decided to put in another worm line by a weed bed at 8 metres to my right. After ten minutes I went over it with half a worm on the hook and after missing a few bites I put two perch and a small rudd in the net, not big fish but I was at least keeping the catch rate ticking over.

Another try right over was fruitless and I was at a loss as to what to try next, I did add another perch from the long line, again on worm. The scum in Ash’s peg was now really bad and out of desperation he set up a really shallow rig to fish five inches deep with maggot to try and catch some of the venues many small rudd. He was getting the odd one and then landed a nice one on caster, he wasn’t bagging but he was slowly pulling away from me. I followed suit and set up a little light rig with 0.08mm bottom and size 20 B511 hook. I tried fishing on the edge of the scum but had no bites so went tight across to the far bank cover and had a roach first put in. My fish weren’t as big but I was catching a lot quicker then Ash.

I was starting to think I might catch him when I looked up to see loads of splashing and pink elastic out before he netted a bream of a pound and a half. He was now well ahead with an hour to go. I was still getting odd small roach and rudd at a quicker rate than my neighbour but he added a couple of quality roach and I knew I wouldn’t catch him. I was actually quite enjoying it although I was missing quite a few bites. The whistle went and I ended with 37 fish which I reckoned might go 3lb.

I packed up and as I had the scales I went down to start the weigh in at peg 1. Martin ended with 5 carp plus that tench and two skimmers for 10lb 14oz and ran out an easy winner. Scotty Russell had gone bits bashing and weighed 2lb 4oz to win the 5 peg section by default. Janders had 1lb 6oz and Robin 1lb 11oz, Richy had left for an early bath. Malcolm (Old Fossil) Levy had 1lb 4oz, Alvin Jones had 12oz and Roger didn’t weigh. My fish weighed 4lb 5oz and Janders handed over another nugget, Ashley’s net weighed 6lb 1oz to claim second spot. I actually ended up third but as we only paid the top two and two sections, I won my section by default and picked up £20. Janders was obviously overjoyed at handing over another £1

Still my first pick up for a few weeks, next week we’re back at Dillington for round six of the summer league so fingers crossed I can get a result there.