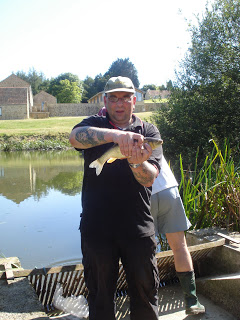 I got to the draw and it already looked like being a blisteringly hot day. There were 11 anglers fishing and I was hoping for a good result as I’m currently jointly leading the league with Martin Heard. I drew peg 2 which is on a point, I’ve drawn it before and not done very well and Martin had struggled off it last match so the signs weren’t good.

We got to the pond and the level was down due to the farmer abstracting but there were loads of small fish topping. I had Richy White to my right on one of the ‘hot’ bush pegs and Robin Cox to my left. I made myself comfortable and started setting up. Richy came up for a chat and was already dripping with sweat. I plastered on the sun cream in readiness for the scorching day ahead.

On the whistle I cupped in three balls at 11 metres and some choppie on the inside, I started out with caster on the hook and had bites straight away, I bumped the first one and the second one came off on the way in, not a good start. I then had a small roach but missed and bumped a couple more. After the first hour I’d only had two roach and two perch and it felt like it was going horribly wrong. I could see Martin across form me catching regularly and Robin shouted up that Alvin was catching well too. I tried my shallow rig but never had a bite on it, maggot on my deep rig saw me add a perch but I was really struggling.

I put in another ball on the long line and came inside with caster on the hook but after 20 minutes I hadn’t caught anything else. Richy landed a chub but was so hot he went for a wander and reported not a lot (apart from bits) was being caught on our side. My nemesis Janders hadn’t caught much and Robin had only had two perch. I went back out with the shallow rig with single red maggot on the hook and had a couple of small roach quite quickly but it soon tailed off. The heat was really uncomfortable and Richy shouted up that all his maggots had died.

I was still getting odd small fish on the shallow rig but was going nowhere fast, Martin was still catching and shouted across to Bruce Hunt (his travelling partner for the day) that he had 58 fish. Bruce had a similar number and then Janders landed an eel and I could feel a bad section result in the offing and with it my league slipping away. I could see some splashing coming from my right quickly followed by some swearing and I asked Richy what had happened. He replied that he’d landed another chub only for it to leap, salmon like from his hands back into the lake! Justin Charles on the other side of the bush had also landed a chub but at least he was in the other section. Richy with his chub (the one that didn’t get away!)

I kept swapping between my three lines but wasn’t adding much to my net, just the odd small roach and perch. With two hours to go I decided I needed a bonus of some sort and cupped in a load of caster and hemp on my inside line to try and catch some eels. I went in over it with double maggot and after ten minutes there were loads of pin prick bubbles coming up and I felt sure there were some big fish mooching about. I did get the odd bite but only small perch and had four during the remainder of the match to end with 28 fish (small roach, perch and a couple of tiny rudd). I felt sure I would be bottom or very near it in the section.

I packed up and went to watch the weigh in which started with Richy, his chub plus bits weighed 2lb 5oz, my ‘haul’ went 1lb 6oz. Robin Cox didn’t weigh so at least I had beaten somebody! Things got better when Alvin weighed 1lb 5oz and Janders only had a pound (and lost another pound). Bruce Hunt had loads of small perch for 4lb 15oz and Graham Field had a similar net of whip fish for 5lb 13oz but he was in the other section. I ended up third in the section which was much better than I thought but I knew Martin had gained some points on me as he won his section (and the match) with a mainly roach bag of 9lb 10oz, his second win on the trot.

This was the worst I’ve known the pond fish for ages and I really don’t know where all the quality roach have gone, mind you I really don’t think the heat helped. I’ve now slipped to second in the league and there are several people hard on my tail. Next week I’m on the resi and apparently the roach are showing big time along with some good bags of bream. The top three on the day (from left, Bruce Hunt, Martin Heard and Graham Field)

League (after six matches and dropping the worst result)