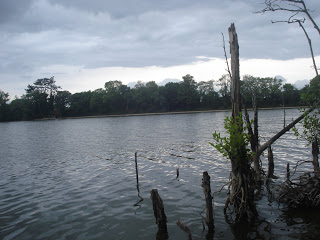 After my last disaster on ‘the resi’ I was keen to get back and plunder the resident bream population, I really wanted to draw in the forties but of course drew peg 37. Apparently the roach have started to show with a vengeance and you need to make your mind up what to go for and stick with it because if you have an hour on the feeder and the bream don’t show you are already 6lb behind the roach anglers. I got to my peg and set up a Drennan feeder rod and a whip! (what have I just said!). The view from peg 37 looking across to the dam wall

For company I had the legend that is Graham ‘Dino’ Pepper on my right and Butch Baker on my right. Graham only set up a feeder and Butch, like me, set up both. Dave Lawrence next to Dino was going all out for roach so it would be interesting to see how both approaches fared. I mixed up some Van Den Eynde Bream Gold Pro groundbait and added some fishmeal. For bait I had maggot, casters, hemp and some corn. Dino in full flow before giving me a spanking off the next peg!

On the whistle I cast out to the clip (about 40 yards) with double red maggot on the hook, I didn’t leave it out long so I could get some bait into the swim. I started to get indications and in the first hour had around 6 roach but no signs of bream. Dino was still fishless and Butch only had one roach. Dave was bagging and catching loads of silvers. Butch then hooked a bream only for it to come off on the way in, after another half an hour I had added a few more roach but no bream. Dino landed a slab so I stuck with it a little longer and tried corn to try and avoid the roach but they were hitting this as well. Butch was now on the whip and catching lots of small fish.

I had been feeding caster and hemp at 4 metres and decided to give it a go, with caster on the hook the action was instant and I was soon catching roach including some nice ones but I had two or three come off. I changed my hook from a 20 B511 to an 18 B611 with a more substantial 0.12 mm bottom went back out and couldn’t get a bite! Once again I was going nowhere fast and not enjoying it one bit. After two and a half hours I was well behind Dino, Butch and Dave. I was now back on the feeder and catching the odd roach on maggot and even corn. Dino then had two bream in quick succession and was closing in on Dave.

I had a decent bite on triple red maggot only to strike and my 0.12 mm hooklength to part like cotton. I went back on the whip again and enjoyed a quick flurry of roach and small perch before the bites tailed off again. Butch was fishing a much longer whip than my 4 metres and catching consistently so I chucked it up the bank and decided to concentrate on the feeder for the remainder of the match – shit or bust! With 2 hours of this 6 hour fixture left, the heavens opened and it looked like it was here for the duration.

The chap next to Butch latched into a big fish and after a lengthy battle netted a carp which after weighing straight away was confirmed as 19lb exactly – a nice bonus! This cheered Dino up no end and he was muttering about bivvies and bite alarms for the rest of the match. He added another slab but lost a decent skimmer at the net which did nothing to improve his mood. Dave was still banging out roach and looked good to win our five peg section. At half past four (the match finished at 5), my tip went round and I finally hooked a bream, I carefully played it to the net. As I went to unhook it there in its mouth were not one but two hooks! This was the fish I had snapped off on earlier as my three maggots were still wriggling away and I had hooked it on corn! I removed both and deposited it in my net.

During the next half an hour the only distraction was EA bailiff Andy Locke checking my licence for the first time this season. In reality I was only now fishing for pride but you never know I might snaffle another, time ticked away and at 5 ‘o’ clock the all out was shouted and as I lifted my rod to reel in there was a fish on! Shortly after I netted my second bream which was a similar size to my first at 5lb+. Dino also had one on the whistle to take his final tally to five and Dave shouted up that it would be close between them.

I quickly packed up my sodden gear and started taking some of it partway back to the carpark. When I got back to my peg Les and the scales had arrived at Dino’s peg, he weighed just under 24lb and as Dave weighed 27lb 4oz that lost skimmer might have been costly. My 42 fish (2 bream and the rest roach and perch) weighed 15lb 2oz and I needed at least another couple of bream. Butch weighed 16lb odd so wasn’t as far ahead of me as I’d thought. As expected the high numbered pegs did all the damage and long range feeder expert, Mike Hosgood, had 15 bream for an excellent 68lb 4oz from peg 48. Match organiser Les Braunton was second with a mainly roach bag of 45lb on the whip and tares from peg 50. Dave was third, Yeovil and District Angling Centre boss, Scott Russell was fourth with 25lb 10oz of bream and Chris Haines was fifth with 24lb 14oz of roach.

Next week I’m back on Dillington and I might be able to use my new pole, a Garbolino Super G8 – whoop, whoop! God I hope it fishes better than last time.