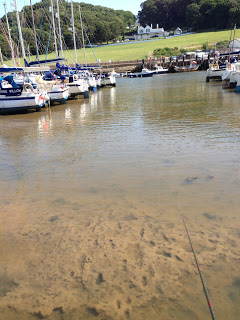 After seeing all those mullet last Saturday, we just had to have another crack at them and with the sun shining, I was only a few minutes late picking Andy up. We popped into the Tesco’s in Seaton for some loaves of bread before going to the little café by the tackle shop for a fantastic bacon and sausage sarnie, which has been the highlight of previous trips. As we sat outside eating them, we could see mullet bow waving in the shallow water by the boats in the marina opposite us and couldn’t wait to get started.

As we walked over the river bridge we could see another angler fishing and we stopped to ask how he was faring. He said he hadn’t caught yet but there were dozens of mullet swimming about in front of him and we didn’t stop long and hurried on round to where we’d seen all those fish last time. The tide was right out and the water was literally only inches deep but there were loads of mullet milling about. Fishing the float would be impossible in such shallow water so we set up simple paternoster rigs on our float rods and tried casting out to the slightly deeper water.

Even with a relatively short tail our bread hook baits were very close to the surface and the mullet would swim very close to our baits but we had no takes and after half an hour or so the water level had risen enough for us to switch to float rigs. We both had similar crystal floats on, mine was a Drennan 4AAA Chubber which I had shotted with a simple bulk just above a 0.18mm hooklength with a size 12 Kamasan Animal barbless hook attached.

Andy had done some liquidised bread again and he threw some in around the areas we were fishing, there were mullet everywhere and surely it was only a matter of time before we caught? With no indications I tried a small worm with the same response and we started to feel it would be another frustrating, fishless day. The tide was still coming in and mullet seemed to be coming from everywhere, this was getting embarrassing! There were a lot of smaller fish but amongst them there were some that had to be four or five pounds.

Finally we started to get some indications but as we missed them all, we started to question whether they were actually bites at all! With the tide nearly at its peak, I’ve cast out and the float has settled before shooting under, I struck and there was a fish on, it fought really well and made several powerful runs and was still fighting at the net. The fish was safely netted and it certainly looked bigger than my previous best of 1lb 13oz. I unhooked it and quickly got my trusty Avon scales out, the needle settled on 3lb 4oz and it was a new personal best for me. I was stoked and it was a lovely fish, Andy took a few snaps before I slipped it back.

We carried on for a bit longer and missed a couple more bites (well they looked like bites!) but with the tide at it’s highest and lapping at our feet, we couldn’t see as many fish and we weren’t getting as many indications and Andy said he’d had enough. I really wanted him to catch but these mullet have got to be the most frustrating fish on the planet! I am starting to find it rather addictive and would love to catch a 5lb+ fish and can’t wait to come and have another go.

During the day I also found this dear little crab and had to take a picture (I can almost hear the cries of “It’s not the first time Jamie’s had crabs” as I type this).

When I caught my first mullet I asked if anybody could tell me what type it was and several people said it was a thick lipped mullet, is this one the same variety?