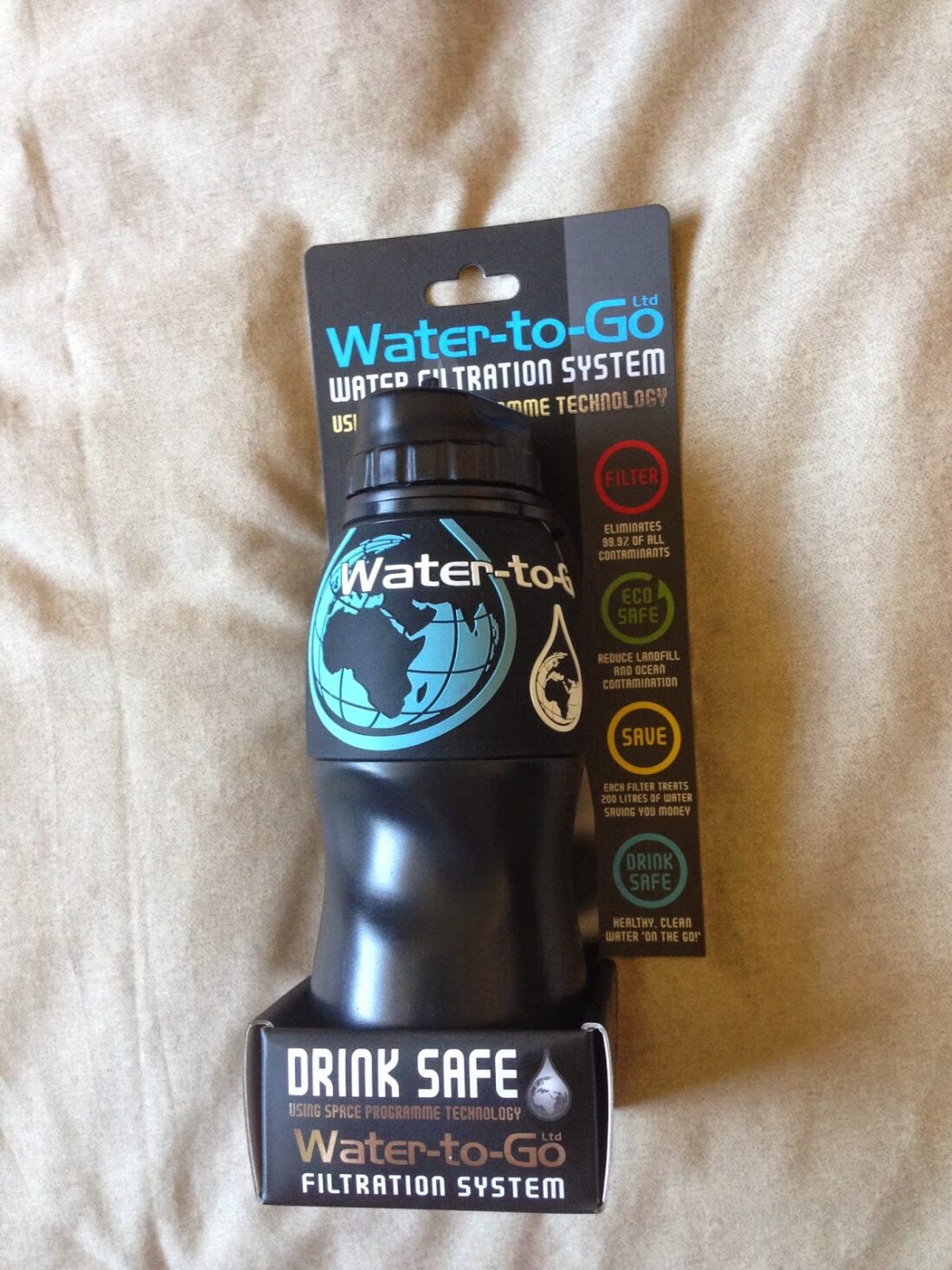 As I’ve said before on the blog, one of the unexpected perks of writing my weekly posts is that occasionally I get contacted and asked if I’d like to review a company’s products and as long as the item in question is related to fishing or the outdoors, I’m more than happy to. I will always try and test the product and actually use it a few times before writing an honest review and posting it on the blog. The latest company to get in touch were a firm called Water-to Go and if I’m brutally honest I hadn’t heard of them before but a quick Google search revealed they offer a water filtration system in a bottle which basically means as long as you have a bottle, any water within reason (not including salt water) can be made drinkable after passing through the filter.

The images of the bottle looked familiar and I remembered seeing them somewhere before, a quick flick through some of my fishing magazines confirmed they were being advertised in several of them. So with everything seeming legit I replied saying I would love to review their product on my blog and a few days later I got home to find a nice parcel waiting for me (I love parcels!). I opened the box to find the Water-to-Go bottle and some instructions on how to use it.

The bottle itself holds 75cl and mine was black with a rubber collar that ensures a good grip. Looking at the website (www.watertogo.eu) there are other colours available too. Along with the instructions there was also an info sheet explaining how it works and that it eliminates 99.9% of all contaminants including the following,

The instructions said it is essential that the filter medium is fully wet to ensure the best filtration results and they suggest the first time you use a new filter that you fill the bottle up and turn it upside town, submerging the filter for 10-15 minutes. I did as instructed before opening the nozzle and giving the bottle a squeeze in the sink and I was glad I did rather than drink straight out of the bottle as the initial water flow from the bottle was rather grey (the colour of the filter) and I wouldn’t of fancied drinking it even though I’m sure it would be fine.

I emptied and refilled the bottle before repeating the process and this time the water was clear and it was time for the first taste test…….. and it tasted fine! Now that may sound a little underwhelming but to be honest if you were asked to define the taste of water I bet you’d be hard pushed to describe it too! I filled a cup from the tap and had a drink before drinking from the bottle again and the tap water did seem to have a slight chlorine tang and the water from the bottle didn’t so the filter had done it’s job.

I realise this wasn’t the most ground-breaking of tests but I had to start somewhere! There are loads of great reviews on the website from people travelling through jungles etc and using these bottles and surviving quite happily but I bet more people are using them and filling up from the tap at home or work to save buying expensive branded bottled water.

The info sheet also tells me that each filter will treat 200 litres of water and that if you use the bottle 2-3 times a day, the filter will last three months. You can also register with the Water-to-Go website and they will send you an e-mail after three months. I struggled with this a little bit because it’s all a bit vague and I would like to know for sure when I need to change the filter as I think if I used the bottle regularly I would end up changing the filter way before the three months was up just to be on the safe side!

I’m sure that it’s fine and when the filter reaches 201 litres you’re not suddenly going to contract the black death or anything and it does say on the website the following ‘One of the three technologies in our filter (the one which controls the taste and the smell) has a lifespan of approx 200 litres; although your filter will still be filtering bacteria, cysts and harmful contaminants, the water after this time will gradually start to taste and smell as it did before using the Water-to-Go bottle. This is a ‘sensory’ prompt for you to change the filter.’ but I do think I’d rather change my filter before it got to the smelly, funny tasting water stage again!

Out of interest I also went on the website and checked out the prices for replacement filters and was a little surprised when I found they were £14.95 for a twin pack which after the initial outlay of £24.95 for the bottle seemed quite expensive. But then as they say on the website ‘By using 4 replacement filters a year, a litre of water would cost well under 5p per litre’  and considering I currently pay around 70p for 500ml (£1.40 a litre) you can save yourself a considerable amount of money.

For the second taste test I headed to the garden where I have a water butt that collects rain from the guttering and is used to water the plants and grass. Now given the current weather where its been really hot and we haven’t had any rain to speak of for quite a while, the water should be nicely ‘stewed’ by now!

I filled the bottle and I must admit to feeling a little apprehensive as I opened the nozzle and raised it to my lips but again it was very nice, clean tasting water (albeit a little warm!). So the system passed both my (rather tame) tests with flying colours, I do intend to stick the bottle in my carryall and try it the next time I’m out the pond and down the river and I will, of course, update this review when I do so.

As I’m unlikely to travel up the Amazon any time soon, I think I will probably get most use out of this bottle by having it sat on my desk at work and filling it up from the tap instead of buying expensive bottled water, saving me lots of money! I also think this bottle will be ideal for anglers, fill it up before you head off and if you run out you have a handy supply close to hand!

I do feel a better way of knowing when to change the filter is needed as the three months is a bit approximate and relies on the bottle being used everyday and I think the majority of people would struggle to keep a handle on when they’ve drunk 200 litres. Maybe if the filter changed colour or something as it neared the end of it’s life?, just a thought and as the filter itself uses space age technology, it must be feasible.

I also think the price will put people off, I certainly wouldn’t have paid nearly twenty five quid for a water bottle even though it would save me money in the long run. I also struggle a little bit to see why the bottle is so expensive, I assumed the cost of the filters were to blame but as they work out at under £7.50, that makes the cost of the bottle around a whopping £17.50!, which I find a tad pricy for a plastic container. That said if I was going exploring in the back of beyond where drinking water was at a premium, this system would be the first item in my rucksack.

Look out for – Lots more reviews in the coming weeks including,