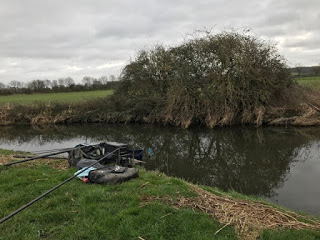 After last weeks bitterly cold conditions, it was lovely and mild all week and after a couple of very mediocre pegs in the last two river matches I was hoping for a better one to end this league on a high. A few of us met at the Little Chef again and it was great to see Harry again and Terry ‘The Toast’ is fast becoming a regular. After breakfast we headed to Coxes to do the draw and after looking at the pegs Rob had put in, I really fancied 124a or 125 and had mixed feelings when I pulled out peg 109 at Redbridge. It’s a swim I’ve wanted to fish for years but it’s been poor in recent matches. Going into this match, Adie was leading the league with 8 points, followed by Steve P on 9 and then me and Fieldy on 12 with Rob on 13 and as Graham had drawn 124 in my section, the same peg he won from last week and Rob was on 125 the most consistent peg in the other section, I was up against it.

I drove to Redbridge and parked up, Rich S had drawn 120 which was also the golden peg although the last few times it’s been pegged, it hasn’t done much and Adie was on 106 which like my peg, would be chub or bust. I set up a 1 gram bodied float and a 1.5 gram Drennan Carbo and put new 0.12mm hooklengths with size 18 B611’s on both, if I hooked a chub, I wanted to make sure I got it out as I might not get too many chances today. Preston size 13 green elastic completed the robust set up. On the side tray I had maggots, casters and Bait-Tech Super Seed Hemp.

On the whistle I started with the lighter rig, inching the rig through the peg at 10 metres which was a section short of the far bank cover you can see in the photo above as I didn’t want go tight across straight away. I was feeding hemp and caster to my right but after 15 minutes with no indications I stuck another section on and held the rig back against the cover, a positive bite saw me strike expecting to meet solid resistance but instead a tiny minnow flew out of the water! Not the result I’d hoped for but at least I’d avoided the blank, a couple more followed and it’s never a good sign when you catch minnows on caster so I started putting in a good pouch full of casters and hemp every chuck in a bid to feed them off.

After an hour I’d only had a few minnows and they were even attacking double caster, I’d tried poking the rig right in the cover and holding it there and then added another section and went 13 metres across to the far bank below the bush, I had a really good bite but it was just another minnow, I even went 14.5 metres down the peg but it was like the peg was devoid of anything apart from minnows. I kept the feed going in but after two hours there was still no sign of a proper fish and when it got to the half way point, I was going through the motions somewhat and starting to feel like any chance of a league placing was slipping away. I stuck at it though as the chub at Redbridge are decent fish and it only takes an hour to win a match here and I thought my best chance might be in the last period as the light started to fade.

I decided to phone Steve P who was on peg 128, a good peg that had been winning matches but it blanked last week, he answered and said he was really struggling and only had a handful of small fish. I told him to stick at it and put the phone down, I glanced at the time and we were now 3.5 hours into the allotted six hours, I looked back up just as a good fish rolled to the right of the cover, where I had been feeding. Suddenly I was interested again as I knew there was at least one fish in the swim, I shipped out and this time when the float sailed away, I just knew it was a chub and sure enough the strike saw plenty of elastic come out, I shipped back quickly so the fish was in the middle of the peg away from any snags and without too much drama, I slipped the net under a 2lb chub and I have to admit, the old heart was pumping a bit.

Next chuck, in exactly the same spot, I hooked number two and safely landed another two pounder, the next bite came nearer the bush and was a bigger fish, getting on for 3lb and all of a sudden it felt like a good weight was on the cards. I had fourth to put me on 10lb and there was still over an hour to go. Things then slowed up although I did miss a couple of bites, my next bite came just after I’d shipped out and was about to feed, this felt like a real lump and when I finally landed it I was sure it would be a new pb. There was still half an hour left and I thought there was a good chance I might get another but it didn’t happen and I had no more bites but I was really pleased that I’d hooked five and landed five.

Rich turned up just before the end with most of his gear and said he’d really struggled for a few fish, I pulled my net out and out of interest weighed the biggest chub which was 4lb exactly, so no new pb for me. I put the other four in the weigh sling and Rich called my weight at 14lb 2oz but would it be enough? We walked back down to weigh Rich, he had a level pound and that peg definitely seems to produce for the first few matches before tailing off. We took our kit back before going up to Adie, he’d had two chub, one early and then one late for 4lb 11oz and barring a disaster I thought he would still take the title but we would have to wait and see how the other pegs had done.

Back at the results and Fieldy had finished second in our section with 7lb 4oz and Karl had weighed 6lb 15oz although it should have been more as he lost the head off his landing net and had to swing in everything! Rob had the top weight in the other section with 7lb 13oz from peg 125 followed by Stu with 5lb 8oz from H4 and Terry with 5lb from H1, Harry had lots of bites and weighed 3lb 12oz from 126 and Steve P had struggled for 1lb 10oz. So I’d won on the day but as far as the league was concerned it was all looking very tight. Photos courtesy of  Rob Cox*, Harry Hebditch**, Terry Morgan*** and Steve Parker^

Despite scoring four points today, Adie had still done enough to win the league with twelve points, with Steve blowing out and me winning my section we actually both tied on thirteen points and I took the verdict on weight (54lb 3oz to 40lb 8oz) so I picked up £45 for winning today and should have some league winnings to come next week.

Next week it’s Barney’s Pairs Open at Dillington and Harry’s so hopefully we’ll have a nice day and raise some money for charity.

Finally the club would like to say congratulations to Adie for winning the league on his first attempt, a massive thanks to V.E.S. Precision for their continued and very valued support and also to Rob Cox for all his hard work running the matches.