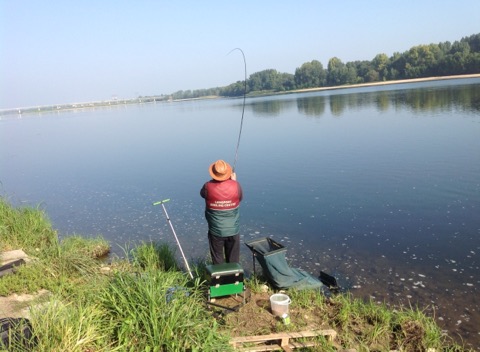 I doubt if anyone could put their hand on heart and truly say they know the mighty river Loire, it is after all one of the great natural rivers of Europe and over 600 miles long. However I have fished it a couple of times a year for the last 7 years and there are a few things I have learned that may be helpful to others intending to do so. For the purpose of this article I can only deal with the area between Angers and Tours, but certainly downstream the river looks similar in character. In autumn it often has the appearance of a flood plain and can vary in depth between paddling pool and 25 ft, similarly the flow between stopped and back currents to raging torrent. With a couple of feet of extra water on my best advice would be steer clear for your own safety. 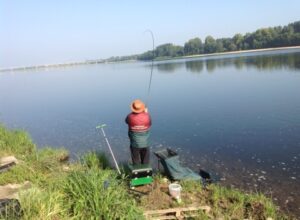 Baz with a good fish on

It is rarely less than 100 metres wide and often much more (far bank waggler fishing very difficult!). Experience has told me that swim selection is the key to success and it’s not always as easy as it seems. Parking can be an issue as the road often runs parallel to the river with few pull ins. Deeper, near bank slacker swims seems to be what to look for but you must consider the volume of leisure activities and how they affect you. The obvious is to keep a little way out of towns as at certain times of year and certain times of day, boats, big and small canoes, jet skis, water skiing, swimming it all happens and plenty of it. 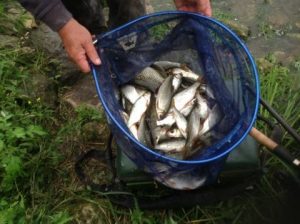 A net of quality roach

Now down to the fishing, my main target are the barbel but there is also superb roach and chub fishing to be had. I have had success on both float and feeder on all sorts of baits but I think my favourite is meat on the lead, when the tip drops back its usually something that is going to test your gear be it barbel, chub, mullet, catfish or even tench or carp. On the subject of species it’s probably easier to list what isn’t there, I hooked an eel once on meat and I wouldn’t like to guess what it would have weighed but it snagged me eventually so I will never know. 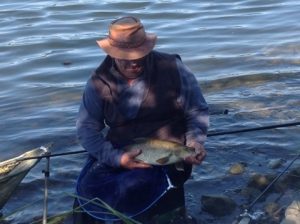 Baz with a nice barbel

Float or feeder on the right day sport can be brilliant but sometimes the most likely looking swims just don’t produce. My best barbel so far is 9lbs 12oz, not huge but I hooked it while roach fishing on an 18 to 0.10mm, certainly a challenge in 15ft of very strong current (sorry no photo, pitch dark by the time I netted it and I’m no David Bailey).

Lastly a few tips that I think may help,  firstly I think getting up early and fishing the morning is a definite winner, less boat traffic and other potential disturbance, also the river is sadly often used as a dumping ground for weed etc I can only guess from tributaries controlled by lock gates or something and restaurant and leisure boats ‘flushing out’ legally or otherwise, I once had a swim full of carrots! (this doesnt seem to happen early in the day). Also there is the issue of the sun, the river runs basically east – west and it’s often sunny, trying to fish into a Loire sunset can get almost impossible especially on a feeder set up, keeping maggot bait can also be difficult in this heat. 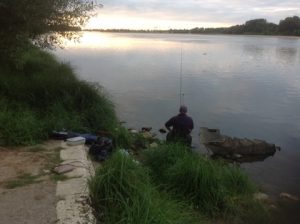 An impressive bit of water

The best tackle shop I have found is in the town of Thouars (called Aigle peche and is in the precinct by the Leclerc supermarket) a few miles south of Saumur, the bait there is not bad and about the best I could find. Lastly to any catfish fans, its not my game but there some hefty specimens about, I have seen several hooked but only one landed, this was by an ‘angler’ in a boat, I think he would have been lynched at home. He gaffed a specimen which he announced to the crowd watching weighed 50+ kilos which he then killed, tied to his boat and steamed off telling them he was going to chop it up for his hunting dogs, there are certainly different rules and attitudes over there!

All photos courtesy of Baz Morgan