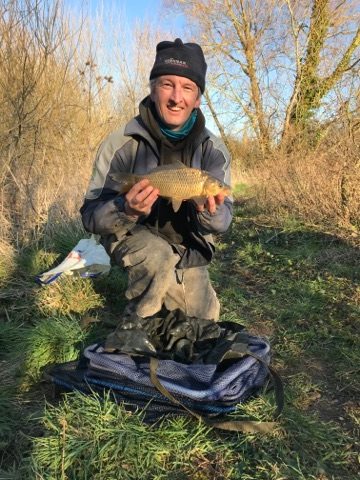 Always one of my favourite matches of the year and an event myself and Justin have a pretty good record in, so when I text him to make sure he was fishing and he replied he couldn’t make it this year, I wasn’t sure I’d be able to find anyone to partner me! Scott Jackson had mentioned a while back he might fish so I messaged him and asked if he wanted to pair up with me and luckily he agreed – cheers mate. The eighteen available spaces filled up in no time and it’s brilliant that this event continues to be so well supported. I’d been poorly all week, still suffering from near fatal man flu and had barely eaten for four days and just for added fun, I’ve had a few issues with pins and needles in my left arm which the doctor thinks is a trapped nerve so I’ve started some more physio and I don’t go a lot on this getting old malarkey!

The match would follow the same format as last year with two venues used, Dillington and Hebditch’s, which the family had very kindly let us use again. The winner of each lake would receive one point, then two points etc and the pair with the lowest points score would be the victors, in the event of a tie, it would go to weight. Towards the end of the week, the temperature dropped like a stone and there was a real danger that Harry’s pond might be frozen, Dillington is normally alright as it’s stream fed.

I have to say a big thank you to Harry who went out and pegged his pond on Saturday and also checked it Sunday morning for me to make sure it wasn’t frozen and thanks also to Paul Adams for putting some closed signs out at Dillington on Friday, your help is really appreciated.

I actually managed some breakfast this week and as soon as everybody had paid, I announced the draw with the anglers at Harry’s going first, we’d decided to leave dominant peg 1 out to try and make it a bit fairer, obviously the pegs either side would be the ones everyone wanted and I also fancied peg 8. I asked Scotty if he would draw for me and as people started pulling their pegs out, nobody was admitting to 2, 8 or 10 but when Jacko handed me a ball I was disappointed to see it had the number 6 on it. I’d drawn it the match before last at Harry’s and not had a bite for four hours before catching two carp and a few rudd to finish well down.

Then it was the turn of the lads at Dillington and Scotty made a better job of drawing his own peg when he pulled out 13 on the bottom bank, one of my favourite pegs. After a short drive I was at the pond and as I unloaded the kit, it has to be said that Jake wasn’t looking too healthy after going on an all day sesh yesterday! 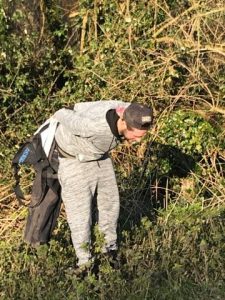 Jake looked a picture of health!

I got to my peg and after a frosty start, the sun was out, there wasn’t a cloud in the sky and it was looking like being a gorgeous day, we just needed to catch some fish now! Hurf was on my right with Terry ‘The Toast’ on peg 8, Rich S on 9 and Jake was on peg 10 and even with the hangover from hell, I still expected him to do well today. 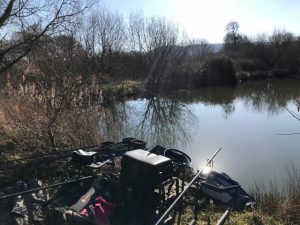 My peg had plenty of options

I set up two rigs, a 0.4 gram Drennan Carp for fishing two lines at 10 metres and a Carpa 2 for fishing by the tree in the margin to my right and then towards the corner on my left. The side tray was rammed this week with casters, pinkies, red maggots, Bait-Tech 2mm Carp and Coarse pellets, dead reds and some corn, both of which I’d added a glug of ‘The Juice’ too.

I was ready in plenty of time and wandered up to have a chat with Hurf, Jake was there and looking vaguely human after having a steak slice, with a few minutes to go we headed back to our pegs but not before the three of us decided to stick a pound in, winner takes all. I shouted the all in and cupped in a few grains of corn plus a few micros on one ten metre line and then fed the other more positively and with the addition of some dead reds. I also fed modest amounts of bait on the two inside lines before starting on the longer, lightly fed line with a grain of corn on the hook.

If I’m honest, even though it was turning into a beautiful, mild day, I was still expecting to have to wait a long time before the fish showed any interest. I was lifting and dropping the rig every now and again, hoping the movement might appeal to something. I hadn’t seen any fish top and was mentally preparing myself for possibly a three or even four hour wait before I got a bite. Young Stuart Aplin was opposite me on fancied peg 2 and after fifteen minutes or so, I saw him net a carp and not long after he had another so at least some fish were feeding.

On the half hour mark, I lifted the rig, lowered it back it in and then it happened, a sharp dig on the float before it submerged from view and the strike saw a fair bit of yellow elastic exit the pole tip, I played the carp with kid gloves before sliding the net under a fish around a pound and a half – phew! I was mightily relieved to get a fish in the net at this early stage and hopefully a few more would soon be keeping him company! Stuart added a third before the first hour was up although I hadn’t seen anybody else catch as yet. 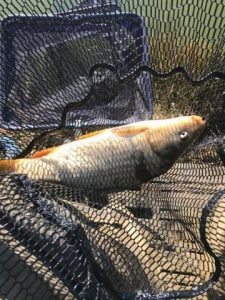 It was a relief to get off the mark

No more indications on either of the longer lines so it was time to try by the tree and in the corner but the float never trembled over the next hour or so. I could see Fieldy on peg 5 and Hurf were chucking little leads round their pegs but as far as I could tell, the only people who had caught were Stuart and me. As the half way point arrived and boredom was setting I walked up to see how Hurf was doing and he said he hadn’t had a touch and nor had Terry or Jake, it was rock hard. He said Harry had phoned him and although it was also tough going at Dillington, most people (including Jacko) were catching a few small roach.

I went back to my peg and went through the motions somewhat, I tried various hookbaits and kept lifting and dropping the rig but not a sniff and I was pinning my hopes on catching a couple in the last hour or so. The ‘Golden’ last hour arrived and it proved to be anything but and as the minutes ticked by, I wasn’t so much praying I’d catch, more that the others wouldn’t! As the final few seconds of the five hours elapsed, I shouted the all out although my offer of fishing a further thirty minutes, was met by various jeers and swear words!

It didn’t take long to pack up and as I was loading the car, Harry arrived, understandably concerned about the lack of fish and worried that the black death had decimated his fish stocks. I sincerely believe that it’s just down to the weather and said as soon as the weather warms up, we should have a match which would give him a better idea and hopefully allay any fears he might have.

My single fish weighed 1lb 8oz and then Stuart’s three weighed 6lb 12oz to win the lake so with nobody else troubling the scales, as long as our partners had caught, we should be first and second in the pairs but who would be crowned Barney’s Pairs Champions? 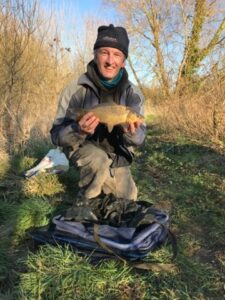 Only small but perfectly formed! 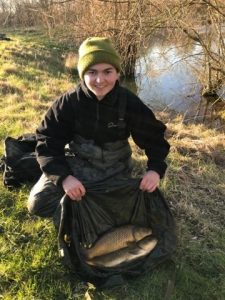 Back at the results and the first person I saw was Scotty who said he’d won the lake with 4lb 8oz of small roach along with a bonus chublet and with Adie Bishop finishing second with 4lb 3oz, that gave us three points which should be enough for victory. Gordon Aplin had struggled for an ounce but as they were the only other pair with both anglers catching, they were second and Adie and Rich S were third with 11 points.

We picked up £120 for winning the pairs plus I had £15 for second on the lake and a £1 off Hurf although Jake didn’t come back and had probably gone straight home to bed! As always the peg fees are donated to a charity of Harry’s choice and this year he decided to split it between The Dorset and Somerset Air Ambulance and Cruse Care, both brilliant causes and if you’d like to find out more or donate, the links are below,

So although the fishing had been really hard, it was great to win it for the first time in a few years (thanks for fishing with me Scotty) and we raised some money for charity, I got home and had a text from Stuart saying ‘Thanks for all of the work you have done this season and great work on the blog’ which really made my day, thanks Stuart, it meant a lot and it’s nice to know all my hard work is appreciated.

Although the new blog was only launched on Monday, I’ve had loads of great feedback on Facebook, Twitter and on here and several people have taken the time to send me messages so thank you all so much and stay tuned as I’ve got loads planned for this week.