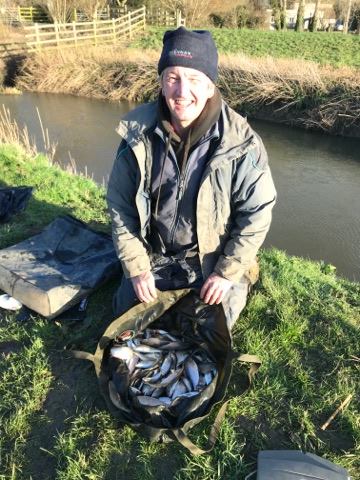 The cold snap continued through the week and with quite a bit of rain on Friday I was starting to think we might be on the pond for the first time this year. I popped down to have a look at the river on Saturday and it looked perfect and with not much rain forecast for the rest of the day or Sunday we should be in for a good match. I also checked out some new pegs at the lower end of the river which looked really nice and several fish topped while I was there.

Sunday morning arrived and at the bowling club there was another good turnout and along with usual faces it was great to see Leighton fishing his first match with us for a while. It was the final round of the IBC league and going into this match, Jake had all but secured the title, theoretically he could be caught by Adie or me but one of us would need to win our section with Jake finishing fourth or worse and we’d have to beat him by over 4lb, so possible but a big ask!

I announced the draw and as people started delving into the bucket of hope, there was the usual array of facial expressions with smiles, grimaces and the odd screwed up face of abject misery! Adie had drawn 124 and didn’t look overly impressed while Jake was on H1 at Hambridge, a peg he won from with over 15lb recently and he would be hard to beat today. Fieldy drew his peg which left just one ball in the bucket and I asked him to pull it out for me, he handed it to me and although I fancied one of the new pegs, I was happy with 125. So with Adie and me in the same section it would be a straight shoot out for the runners up spot in the league.

I got to Isle Brewers and the river looked lovely with a tinge of colour and I said to Adie that I thought it would fish its head off today. Rob was on 126 with Ben Simmonds on 128 although he wasn’t too optimistic after fishing it on Wednesday and struggling. I’d put the start time back to 10:30 to give people time to find the new pegs and get set up so we were only fishing five hours today although in hindsight we could have probably fished to 4 ‘o’ clock. As I was getting my kit out of the car and putting my waterproofs on, the strap on my bib and brace broke which wasn’t a great start and I hoped it wasn’t a bad omen. 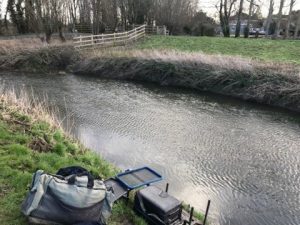 The river looked nice but the wind was bitter!

I got my box in place and set up the same two rigs as last time, a 0.2gram Drennan AS1 to fish three sections to hand running the rig through and a 1 gram bodied float for holding back, both had 0.10mm hooklengths with size 18 Kamasan B611’s. I’d also put some of the new MAP orange 3-6 elastic through one of my top kits and was looking forward to trying it today. On the side tray I had bronze and red maggots, casters and Bait-Tech Super Seed hemp. It was looking like being a lovely day with blue skies although the rather keen wind was a tad nippy. I was ready in plenty of time and then heard Adie shout something, I looked up and he was pointing to something, when I looked there was a very big, ominous black cloud, I walked up to see him (pulling my bib and brace up as I went!) and we met midway between our two pegs. I said hopefully the bad weather would bypass us but I think that was more wishful thinking on my part!

With a few minutes before the start we headed back to our respective pegs, I picked up the lighter rig and put a caster on in readiness for the start and typically the wind got up and hail stones started pelting down – lovely! A quick glance over my shoulder revealed all those black clouds headed our way. I flicked the rig out and started feeding casters and hemp to my right, I had a 3oz roach second run through but already I could see the strong downstream wind was going to be a pain as it was blowing the rig around and affecting presentation. Despite that I was catching well, mainly small roach and dace along with the odd minnow. I did swing a better roach that I really should have netted and was just thinking as much when it slipped from my grasp, swung back out and dropped off!

After the first hour I had 20 fish for probably 2.5lb although I’d bumped off a couple and also dropped off a decent dace when I tried swinging it (I know!, maybe I’ll learn one day). The weather was awful, we had hail and rain and it even tried snowing a couple of times but the wind was the worst and it made swinging the rig in a much more difficult job than it should have been! The second hour was similar and I had another 16 fish to put me on around 4lb with three hours to go. I was a little worried that at the current catch rate, I would do about 10lb and I didn’t think that would be anywhere near enough today and needed some better fish to put in an appearance. The other noticeable thing was that I couldn’t seem to catch more than a couple of fish from one spot, I caught just off my keepnet, straight out in front and downstream.

The wind was horrendous and my catch rate continued to go in the wrong direction in the third hour, I tried double maggot but after a couple of minnows, I’d soon had enough of that. I did try the heavier rig and although I had a few bites, it just wasn’t right, because it was so shallow the olivette was nearly under the float and it was all wrong, a slightly lighter rig with a spread bulk would have been much better I feel. I also tried adding another section and had a run of fish but that wasn’t quite right with the long line either. I did see Rob walk up the road with his landing net as he’d snapped his number four section and was off to retrieve his pole sections. He got them back but said he’d also suffered a fair bit of pike trouble so not a good day!

I was still getting odd fish but it was obvious I wasn’t going to do a big weight, Rob turned up and had called it a day after snapping another section. He suggested I go further across which was proving difficult to do with the long line rig, I tried the heavier float and had a little roach followed by the first two chublets of the day, not big fish but at least the catch rate was still ticking over. He left me to it and walked up to see how Adie was doing.

I had another go with the lighter rig and had a couple of better roach from the top of the peg but also lost a good one. With about half an hour left, Rob returned and I asked if Adie was bagging, he said not really although he’d caught one chub and had just started to get some better roach. He also said he’d heard from Leighton on one of the new pegs and they were all struggling. Just after he left, disaster struck when I hooked the far bank, I grabbed the elastic and pulled, the float shot back at a rate of knots and hit my pole rest attachment, disintegrating in the process, the float tip and stem were still on the line but the body was nowhere to be seen!

For the remaining twenty minutes or so, I fished the heavier rig and had a few more fish to finish with 81 roach, dace, chublets and gudgeon (plus a few minnows) which at an average of 1.5oz apiece would give me around 7.5lb but would it be enough? I packed up and went to weigh Adie in first, he had 7lb 3oz and this was going to be really close, I pulled my net out and he immediately said I’d beaten him but I still wasn’t sure, the needle eased past 8lb and he called it at 8lb 6oz – phew! I took my kit back to the car before going down to weigh Ben in, he’d struggled for 1lb 2oz and wasn’t going to come back for the results but I said if the other section had fished really hard and Adie and me framed, he might sneak a default section win. 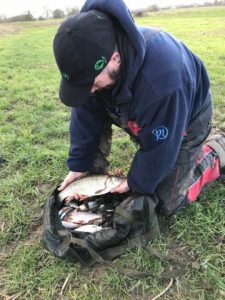 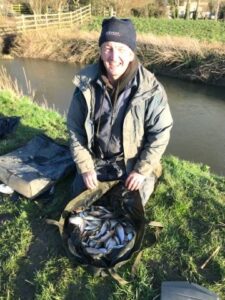 Jake phoned and had done a fantastic 13lb 3oz of quality roach which meant he’d won the section and the league title. Back at the results and although a few struggled in the other section, given the conditions, there were some decent weights, Frank had caught steadily all day to weigh 6lb 8oz and young Stuart ‘Budgie’ Aplin had weighed 5lb 9oz. Why ‘Budgie’ you may well ask, well (and you have Hurf to blame for this), he’s always on the perch! And true to his nickname he had several in his catch today including a real stunner of 2lb 10oz. Thanks to Jake Woodard for the photos* 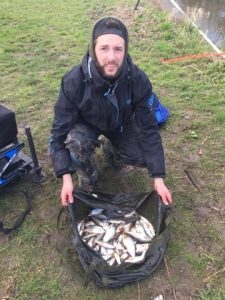 Jake won with 13lb 3oz of quality roach from Hambridge* 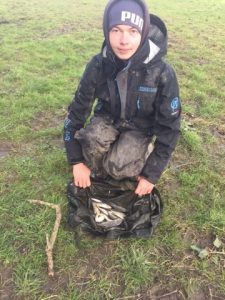 With no sponsor for this league, Rob had managed to secure some money from Diversey, a fantastic gesture and very much appreciated. I worked out all the points before doing the results, Jake was the winner on the day to take the league title in style, I ended up in second place on the day picking up £35 plus another £30 for the runners up spot in the league, Adie was third and Ben (told you mate!) and Frank were the two section winners.

So after nine matches, the top five in the league looked like this,

I’ve updated the list of framing pegs so far in the fourteen matches we’ve had on the river,

We’ve had ten different winners so far with Frank Woodard, Adie Bishop, Jake Woodard and me the only anglers to win more than one match.

So another cracking little league, before I go here are a few facts and figures from the nine matches (seven on the river and two on the pond),