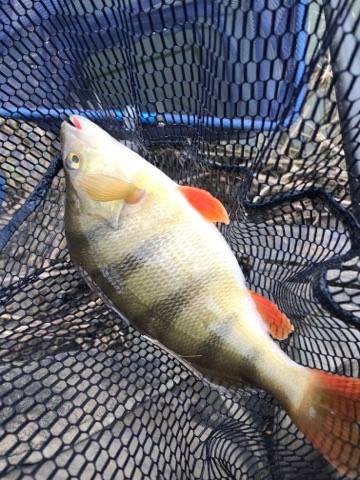 Before I get on to this weeks post, I heard the terrible news that the legend Charlie Barnes passed away yesterday, I didn’t know Charlie that well although ours paths crossed on the Isle a few times many years ago. More recently I used to see him at Summerhayes quite a bit and, like me, he used to love fishing for the silvers. He always had a cheeky smile and never lost his sense of humour, even when his health took a turn for the worse. The last time I saw him was at the Champion of Champions Silvers Final at Summerhayes when one of his mates brought him down for a day out, rest in peace mate, hopefully you’re bagging on skimmers somewhere! Thanks to Jeff Sparkes for the photo. 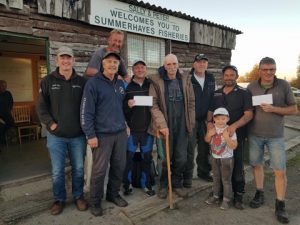 For this weeks match, the final round of the V.E.S. Precision league, Adie had pretty much secured the title, although mathematically Steve P could catch him, Adie would have to blow out and Steve would need to beat him by over 21lb! It’s a lot closer for the runner up spot though with Steve one point ahead of me although I have a slight weight advantage so I needed to beat him today – let battle commence!

My day didn’t get off to the best of starts when I woke up feeling rough as hell and if I didn’t have to organise the match, I probably wouldn’t have fished. I got to the bowling club and I couldn’t even face breakfast! With the pegs I put in, I didn’t really mind where I drew although I did fancy 120 as it’s been the most consistent peg on the river this year, whereas in other years, its tailed off after Xmas this season it’s performed all the way through. I announced the draw and as I was holding the bucket, after everybody had pulled out their pegs, with one ball left I asked Baz to draw for me and wasn’t overly upset when it was peg H4. There were all the usual comments about drawing better than Picasso but so far it’s only actually framed once!

Elsewhere Terry ‘The Toast’ was on H1 with Karl on 120 and his brother Stu on 125, Steve P was on 126 which put him in the other section. As I arrived at Hambridge I was a little surprised that Terry’s car wasn’t parked on the grass verge and I couldn’t see him below the bridge, then I saw a rod bag resting against the bridge on the upstream side! I parked up and sure enough Terry was setting up in my peg, I let him know the good news before giving him a hand to move his kit.

I got my box in place and set up two one gram rigs, one to fish three sections to hand and the other a short line rig, on the side tray I had the usual casters, bronze and red maggots plus some Bait-Tech Super Seed hemp. 10:00 arrived and I shouted down to Terry before starting with the three sections to hand rig with double red maggot on the hook. Second run through I had a small roach and more followed along with the odd 3-4oz fish which were just about swingable. After an hour I had 28 fish for around 2-3lb and it was going well. 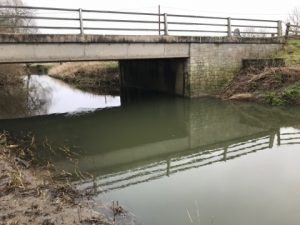 I could see Terry was catching well but he was also suffering a fair bit of pike trouble, It was still a bite a chuck for me and I kept slipping a caster on to see if I could improve the stamp but they weren’t having it and double red maggot was definitely the best hook bait. After 90 minutes I struck at a bite and was met with solid resistance before a good fish shook it’s head and I just knew it was a big perch as there are quite a few in the area, I played it carefully, mindful of the perch’s bony mouth and slipped the net under a lovely fish around 1.5lb, it was in stunning condition and one of the best looking fish I’ve had in a long time. 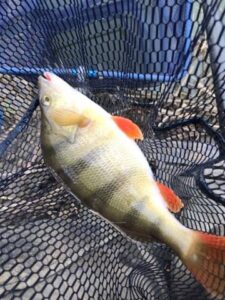 A lovely perch in perfect condition

I had another 33 fish in the second hour and with that perch I probably added 4-5lb to the net and I started to think a big weight was on the cards. Typically going into the third hour, bites slowed right up and I started having to chase them around a bit and I wondered if perhaps a pike was spooking them. I stuck another section on and had a decent roach on caster but it was a one off, fish had been topping under the bridge all day so I went to 11.5 metres and swung the rig out by the far side, I started getting odd roach but obviously it was a lot slower and a pike also had a go at a fish as I shipped back. I probably only added a pound or so during the third hour.

I kept swapping between fishing under the bridge and three sections to hand and was still putting fish in the net on a regular basis and then with around an hour and a half left I flicked the rig upstream with caster on the hook and started catching some quality roach right under where I was feeding. Then the float sort of dragged under and I struck rather half heartedly and once again it was solid as another big perch moved off, I was sure it was going to come off due to not having a good hook hold but after a couple of runs, I started to think I had a chance when everything went slack – gutted!

I had a run of good roach but couldn’t stop thinking about that lost perch which would have been the icing on the cake. The good roach kept coming and I was netting quite a few and swinging some that I probably shouldn’t have and then I hooked another perch, this time my luck (and the hook) held and I slipped the net under another superb looking fish of around the same size as the first.

With around thirty minutes left, Ben Simmonds and his missus pulled up on the bridge, I swung in a fish as they arrived but then never had a bite for the ten minutes they were there, I did hook a rather impressive stick though! They left me to it and no sooner had they driven off, the float went under and I had another fish and added fifteen roach in the remaining twenty minutes for around 3lb. I ended up with 124 fish, nearly all roach apart from a few little dace, those two big perch and two smaller ones.

I packed up and went down to weigh Terry in, he’d had lovely day as well and had caught loads of fish for 8lb 13oz although pike had been a pain and were even attacking his keepnet! Then it was my turn and the needle pulled round to 16lb 11oz, my biggest weight of the campaign and a lovely end to this years river matches. To be honest with that lost perch and some bumped roach it should have been nearer 20lb. 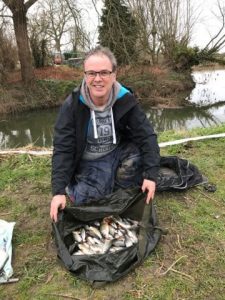 Terry had really enjoyed himself and weighed 8lb 13oz 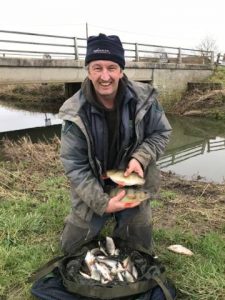 Back at the results and Karl had a nice net of dace and roach for 9lb 6oz from 120 for second place and Terry finished in third place just edging out Adie Bishop who had 8lb 8oz from peg 128 although he did miss the keepnet with a decent chublet! Steve P actually finished third in his section which meant in a carbon copy of last year, I’d leapfrogged him into second place. I picked up £45 for winning on the day and hopefully I should have some league winnings to come next week. Thanks to Steve Parker* and Stuart Aplin** for the photos. 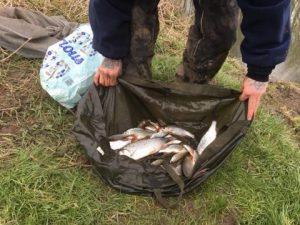 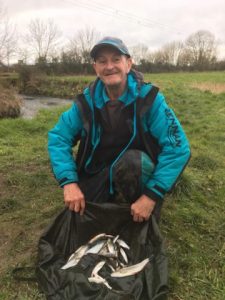 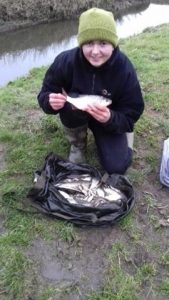 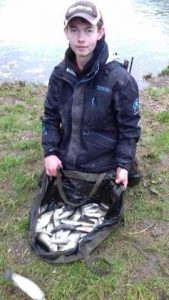 So a massive congratulations to Adie Bishop for winning the V.E.S. Precision league for the second year running, in fact the top three is the same as last year so well done to Steve P on his third spot.

After seven matches and dropping the worst result, here are the final league positions,

I’ve updated the list of framing pegs so far in the fifteen matches we’ve had on the river,

We’ve had ten different winners so far with Frank Woodard, Adie Bishop, Jake Woodard and me the only anglers to win more than one match.

Here are a few facts and figures from the seven matches,

Before I go. the club would like to say a huge thanks to V.E.S. Precision for their much valued and continued support, it really is appreciated.