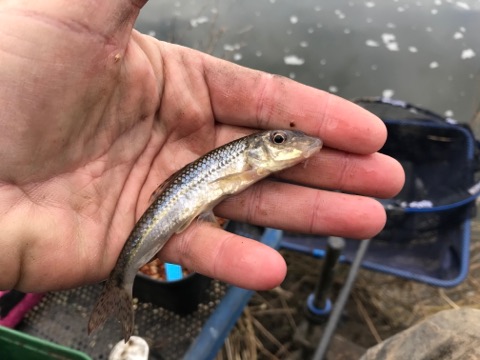 In last weeks post, I shared some great feedback I’d received, I wasn’t ‘angling’ (if you’ll excuse the pun!) for nice comments but it would seem that the blogs readers are a lovely lot and I just had to share a selection of the awesome things you had to say, thank you all so much, it means a lot to know you like what I do,

Ben added ‘I live my fishing through your blog these days. Feel like I know the venues you fish and the characters you fish with so well. Great blogging mate.’

And this from Don ‘Great blog and great fishing glad you got a result, nice one’

On to this weeks report and it got colder in the week but we had some rain on Saturday which would hopefully add a bit of colour to the river. I walked miles of the river the day before as I was hoping to put some new sections in but at South Bradon the only fishable peg was 66 which looked amazing but there was nothing else to put with it, the Stone Bridge, Council House and Hell Hole all either had no depth or nowhere to sit and peg 74 which used to be full of chub has had all the trees recently removed and didn’t look very nice at all. I must admit I walked away from that section feeling disheartened.

Things were better at North Bradon with the pool below the bridge looking really nice although it would possibly be quite awkward to fish, peg 96 below that looked awesome with loads of overhanging tree cover and I put a piece of paper down as a marker, there was also a nice looking swim below the wires which I put as 97 but as it was an unknown quantity, it would be a reserve peg, the next bend below looked good with far bank cover and a raft of rubbish, so that would be 98, I also looked at what used to be peg 100, which looked good but a really long walk. The forecast was for strong winds the following day, so I was going to put Lower Coxes in as Redbridge would be very exposed but when I stopped to have a look the access has been blocked with a big rock to try and stop the fly tippers.

On a much more positive note, we had 16 anglers booked in with several new faces joining us including Steve Maynard who was coming all the way up from Cornwall to fish and Martin Pallett, Linda Pallett and Dave Taylor coming down from Newbury after reading about the river on the blog. Steve said he reads the blog and wanted to have a go on the Isle, he’d been asking about depths, tactics etc and I’ve tried to give him as much info as possible, he also came up and fished the Tone recently where he had a cracking day and framed. I was really hoping they’d all enjoy themselves and catch a few fish.

I got to the bowling club and they were already there along with a few regulars, I ordered breakfast before introducing myself. I finished eating and started taking the money, we always run an optional £5 superpool for the open and nearly everyone entered it. With everybody paid up, I explained about the sections and parking etc before announcing the draw, Adie went in early per usual but decided to let someone else have a go on 126 and 128 today as he pulled out 108 at Redbridge, a good peg but would be very exposed today. Hurf drew 125 and was happy with that, as was Terry ‘The Toast’ with 128 and Justin on 124, Baz wasn’t as impressed when he drew the same peg as last week, 123. Fieldy was on 126 and I was wracking my brains as to what pegs were left, Big Frank stuck his hand in the bucket and pulled out H4 which has been a very consistent peg, that left just one ball and I asked Frank to draw it for me, it was 96 which I was fairly pleased with but it was a bit of an unknown as it hasn’t been pegged for ages.

The newbies had a mixed bag of pegs, Steve and Martin had both drawn really well with pegs 120 and H1 respectively, Linda was on 129 which is a half decent draw and Dave was down with me on 98 at North Bradon. I’d decided to put the start time back by half an hour to give people plenty of time to find their pegs and set up and it was a good job I did as by the time I’d driven to Isle Brewers so Martin could follow me and then back to North Bradon where I showed Dave where his peg was, it was a bit of a rush to set up. 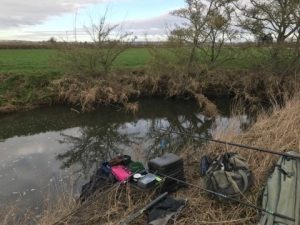 Hopefully a chub or three about!

I didn’t want to have to go too far down the swim if I could help it as the overhanging branches would make it hard work getting fish out. After half an hour with no indications, I decided to have a go at the top of the swim where the flow was going back on itself, the wind was hampering presentation and it was bloody cold as well! A further thirty minutes passed without any sign and it was starting to look like I might have to venture down into the lions den. I went back to inching the float down the middle of the peg and was holding the rig back by the second overhanging branch you can see in the photo when the float dipped under but there wasn’t the solid resistance I’d hoped for on the strike and a little gudgeon was the result! 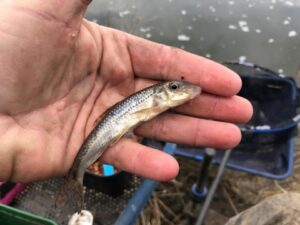 At least I hadn’t blanked!

With no more indications, I’ve gone further down into the chubs lair but still no indications and I was starting to get the feeling it wasn’t going to happen. I did have one little knock but when I had a look at the bait, just the end had been nipped off the caster which I suspect was probably the work of a minnow. The wind was still playing havoc with presentation so I rested the pole on one of the branches while I had a cup of coffee, after a few minutes, I had a couple of knocks as something had a go at the bait although it didn’t really develop but at least I was starting to get a bit of interest. I still felt there was a good chance I’d get a couple of chub, which might seem like an odd thing to say with half the match gone and less than an ounce in the net, but I know there are chub in the swim and surely they would have a go at some point!

With about two hours to go, Justin phoned from peg 124 to see how I was doing, I told him and he said he was struggling too with just minnows to show for his efforts, apparently it was a similar story with Baz on 123 and even Hurf on 125 wasn’t bagging but he was putting a few fish together. So it sounded like the river was fishing really hard and a couple of chub might be enough to frame today and I was hoping they might show in the ‘golden’ last hour.

I was going through the motions a bit, running the float through, when out of the blue the float sailed away, a reflex strike saw a fair bit of elastic come out, I shipped back as fast as I could to keep the fish away from the snags but also avoiding the overhanging branches and slipped the net under a chub of around a pound and a quarter, it wasn’t one of the big boys that I know inhabit the swim but it was a start and with an hour and a half to go I fancied I might get a couple more. 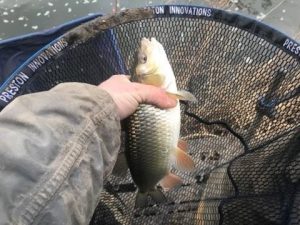 Despite my renewed enthusiasm, I never had another bite, I tried upping the feed but it just didn’t happen and with five minutes to go, Dave appeared behind me, the only fish he’d caught was a 2lb trout. I packed up and he weighed me in with my two fish pulling the needle around to 1lb 6oz. To be honest I don’t think the conditions have done us or the pegs any favours today and I still feel they’re good swims that on another day, could frame but it’s difficult when swims don’t produce, to justify using them again.

I got back to the bowling club and the first person I saw was Andy Welch who’d been at Redbridge and I asked how they’d gone on down there expecting him to say they’d struggled, he said both him and Adie had only caught minnows and the wind had been a nightmare but young Stuart Aplin had caught seven chub for a fantastic 15lb 15oz from peg 106 and Steve Maynard had a cracking bag of roach and dace weighing 13lb 8oz from peg 120. Thanks to Adie Bishop for the photos* 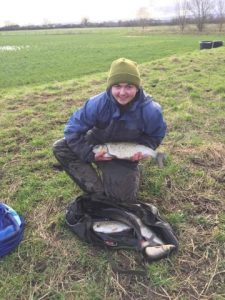 Stuart had some lovely chub for 15lb 15oz* 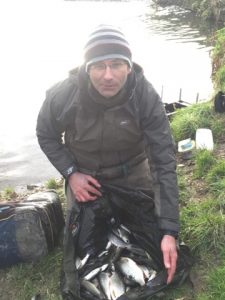 Steve enjoyed his first match on the Isle, catching 13lb 8oz of quality roach and dace*

As the others started filtering back, the river had fished hard in places with Martin having the best weight at Hambridge with 9lb 2oz followed by Frank with 6lb 14oz and Fieldy was top at Isle Brewers with 6lb 15oz, closely followed by Hurf with 6lb 14oz. Intrestingly, Linda on 129 has lost a couple of big fish with one surging off and snapping her number four section, was it that carp again or maybe a big pike. With Stu and Steve both framing in my section, I was the next best weight, just pipping Justin who had 1lb 3oz, to the £20 section money. Thanks to Hurf for the photos** 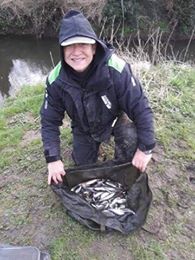 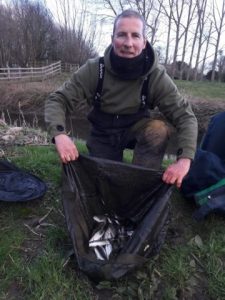 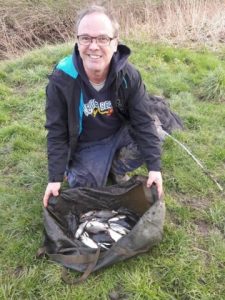 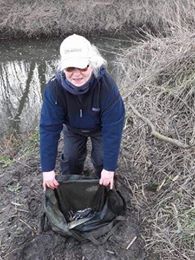 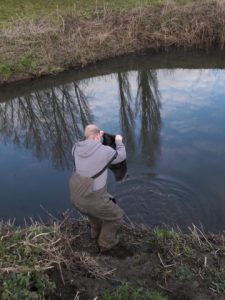 Justin wasn’t overly keen to be photographed with his 1lb 3oz!**

It’s amazing the difference a week makes, last weeks winning peg did 6lb 14oz, 124 only did 1lb 3oz and 128 did 2lb 14oz, all pegs people would have run to this morning and none of them picked up a bean! I bet there weren’t many who would have fancied Stu’s peg this morning, I must admit I thought Isle Brewers could be hard this morning but I thought Hambridge was going to be the place to draw so it just goes to show you never can tell. I reckon the bend just above 106 would hold fish and there’s another swim just above that, also the bend below 120 holds a load of fish so they have got to be worth a try in the future.

I’ve updated the list of framing pegs so far in the thirteen matches we’ve had on the river,

I was really pleased for Stuart as it was his first Ilminster match win and it was also nice to see a couple of the new faces do well with Steve and Martin both framing and all four said they’d enjoyed themselves and want to come again.

We’ve had ten different winners so far with Frank Woodard, Adie Bishop and me the only anglers to win more than one match.