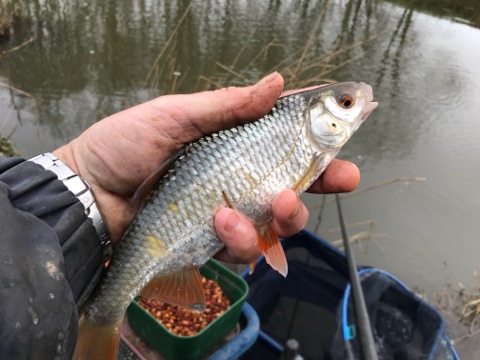 I popped down to have a look at the river on Saturday and it looked spot on with a tinge of colour and at Hambridge there were fish topping and with no rain of any consequence forecast, by the next day it should be fining down and perfect. The following morning I stopped at Horlicks to have a quick look and there was still some colour in it and all the signs were there for a good match. I got to the bowling club and after another nice breakfast, it was time for the draw, Adie went in the bucket early and pulled out peg 126 (I really should get him to pick my lottery numbers for me!), Terry ‘The Toast’ was on 125 which was full of fish last week before the river came up too much and league leader Jake drew peg 124.

Elsewhere, Langport invader Baz Morgan was on 123, Frank was on H1 and young Stuart was on new peg, H3, which looked lovely and hopefully he’d get a few fish, with just one ball left in the bucket I wasn’t sure what pegs were left that I fancied, I grabbed it and opened my fingers to reveal 128, that’ll do, probably one of the best pegs on the river although it hasn’t done much in recent matches. Steve ‘The Pole’ Parker was on 129 which was in for the first time in a while and I quite fancied it to do well today.

We got to the river and parked up and I took my kit across to my swim and it looked a dream, I got my box level and as I started setting up, several small fish topped and I just knew I’d catch today. I only had time to set up a single rig, a 1.5 gram DH13 which I could fish at four sections to hand or stick on more sections to fish further out. On the side tray I had the usual bronze and red maggots, casters and Bait-Tech Super Seed hemp. 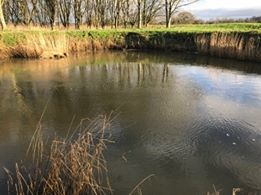 The river was perfect

The start time arrived and I flicked out the rig with double bronze maggot on the hook and fed some casters and hemp to my left, I started getting indications straight away but after a couple of minnows I was soon burying the hook inside a caster. The next bite resulted in a small roach being swung to hand and more followed along with the odd gudgeon (and minnows of course). It was a bite a chuck and as the first hour drew to a close, a few better sized fish started to show and I had to use the net a few times. 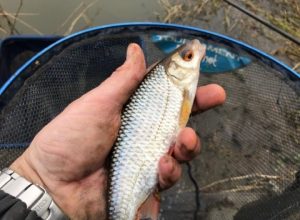 I started getting some chunky roach

I finished the first hour with 28 fish (mainly roach with one dace and few gudgeon) for 2-3lb and it felt like the swim was full of fish as they were still topping all over the peg, the second hour was similar and I added another 27 fish but amongst the small roach I was getting the odd proper one and starting to build a decent weight.

Around the half way point, Baz appeared behind me and said he was really struggling, he also reported that Jake was catching despite suffering a few pike problems and Terry was doing well in 125. I had a few small roach while he was with me before he went down to see how Steve P was doing. Just after he left I had a clonking roach and I was still getting a bite every put in, although I bumped a few and had one roach drop off as I tried swinging it. 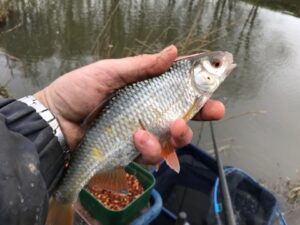 The roach were getting bigger

Baz got back and said Steve was catching a few small fish but struggling to get through the minnows, he left me to it and headed back to his peg. I added another 22 fish in hour three to put me on 77 for 7-8lb but bites had slowed down a little bit and I was starting to think I might have to go further out. I tried flicking the rig to my left and had a few better roach and started to catch well in spells and over the next hour added another 33 fish, my best period of the match so far.

The last ninety minutes saw me add another 45 fish and at the end of the match my clicker was reading 155 fish which at an average of 1.5oz apiece would give me around 15lb although I hoped I had a bit more. I dread to think how many fish were in my peg today as they were still topping at the end of the match, I knew I’d done really well but I’d caught too many small roach to do a big weight.

I packed up and walked down to weigh Steve in, he’d had a bit of a nightmare, he had 1lb 14oz of small fish but had lost a big fish which he’d played for 15 minutes and thought was a pike until a 7lb carp came to the top and rolled onto the hooklength, snapping it in the process! To make matters worse he lost a 4lb plus chub at the net and then later bumped off a smaller chub. 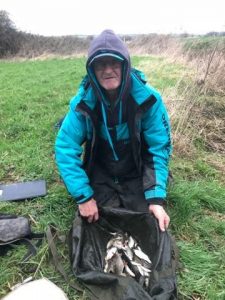 Then it was my turn with Adie calling it at 16lb 5oz so it wasn’t far off what I thought although I was actually hoping the bigger roach might have put it nearer to 20lb, just as I was returning the fish, Baz turned up and asked how I’d done. I told him and he said that puts me third in the section as Terry had weighed a fantastic 25lb 12oz and Jake wasn’t far behind with 22lb 9oz! Baz had weighed 2lb 6oz which just left Adie who said he might have double figures, he also had a lovely net of fish and weighed 11lb 11oz. Thanks to Jake Woodard* and Terry Morgan** for the photos. 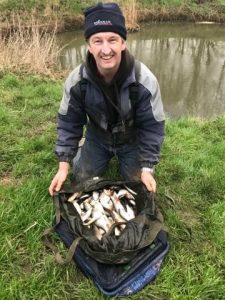 16lb 5oz of mainly roach, my best weight so far this campaign and it was only good enough for third in the section! 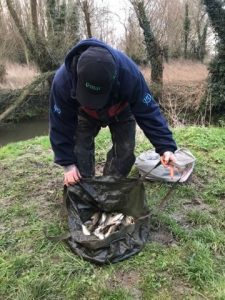 Adie had 11lb 11oz from 126 (I reckon his hat should start charging an appearance fee!) 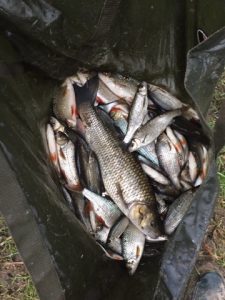 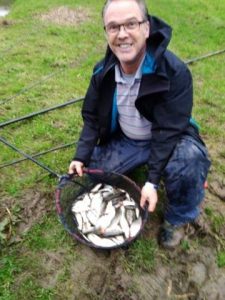 So I was hanging on to third spot but with the lads at Hambridge still to come back, there was a good chance that I might not even win the section money! I’d had a lovely days fishing but I’d have needed another 10lb to beat Terry! I did bump a few fish and missed quite a few bites but maybe I should have tried fishing further out as I know the peg holds chub but I’ve never hooked one in all the years I’ve fished the river and realistically as I was getting a bite a chuck, was it worth the risk, especially as double figures has been enough to win most weeks.

Back at the results and Frank had the top weight at Hambridge with 7lb 7oz with Ben Simmonds and Fieldy close behind with 7lb 2oz and 6lb 10oz respectively, so although it hadn’t fished as well as Isle Brewers, it was very close with ounces separating the top three. I was gutted for young Stuart who blanked on H3 although he did drop off a small fish and there were fish topping. So I hung on to third place and picked up £25 plus a nugget of Steve P.

Today’s match just shows what the river is capable of, even with a blank, the anglers averaged over 10lb a man and I honestly believe other sections would produce some brilliant weights if we fished them in the right conditions. Since Xmas I’ve weighed 8lb 10oz, 10lb 5oz, 11lb 10oz and 16lb 5oz all from different pegs, just fantastic fishing.

After eight matches and dropping the worst result, this is how the league looks so far,

I’ve also updated the list of framing pegs so far in the twelve matches we’ve had on the river,

We’ve had nine different winners so far with Frank Woodard, Adie Bishop and me the only anglers to win more than one match.

I can’t go without sharing some awesome feedback I received today on Facebook,

‘Keep up the good work buddy, been reading the blog for over a year, probably one of the fishing highlights of the week’

thanks Dan, it’s comments like yours that make all the hard work worthwhile,

Next up – The Ilminster AA Open